With Saturday being our last day, we wanted to make the most of it.  And that involved starting the day off right.

Our day began with a brunch at the Court of Two Sisters on Royal Street. We were greeted at the entrance by “charm” gates. The legend is that Queen Isabel of Spain had the gates blessed so that charm would pass to anyone who touched them (not a bad way to start!). 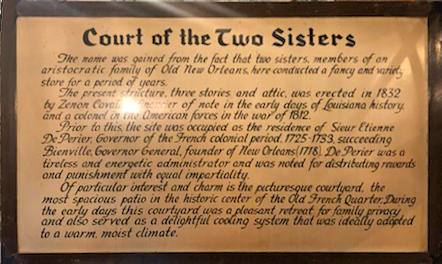 The Court of Two Sisters’ name is derived from two actual sisters who belonged to a well-respected and aristocratic Creole family – Emma and Bertha Camors. The two sisters owned a shop that dressed some of New Orleans finest women with Mardi Gras costumes, perfumes imported from Paris, and formal gowns. The sisters would often serve tea and cakes in the courtyard to their favorite customers, which began a tradition that people still do today. While there is no longer a shop and we didn’t sit out in the courtyard, we were still able to enjoy a Jazz Brunch. The brunch featured things we all liked, such as an omelet bar and eggs benedict…

…but it also allowed us the opportunity to try new dishes such as turtle soup and Duck a l’orange. One side dish offered that the entire table could not get enough of was the sweet potato salad. Everyone’s favorite part was the dessert – while the buffet style allowed us to try our own combination of sweets, a common favorite among the table was banana foster with homemade vanilla ice cream. After our brunch at the Court of the Two Sisters we decided to walk around the French Quarter (much needed exercise) before heading to the Arts District for our next stop.

It was a busy day in New Orleans.  In addition to the regular New Orleans nuttiness… 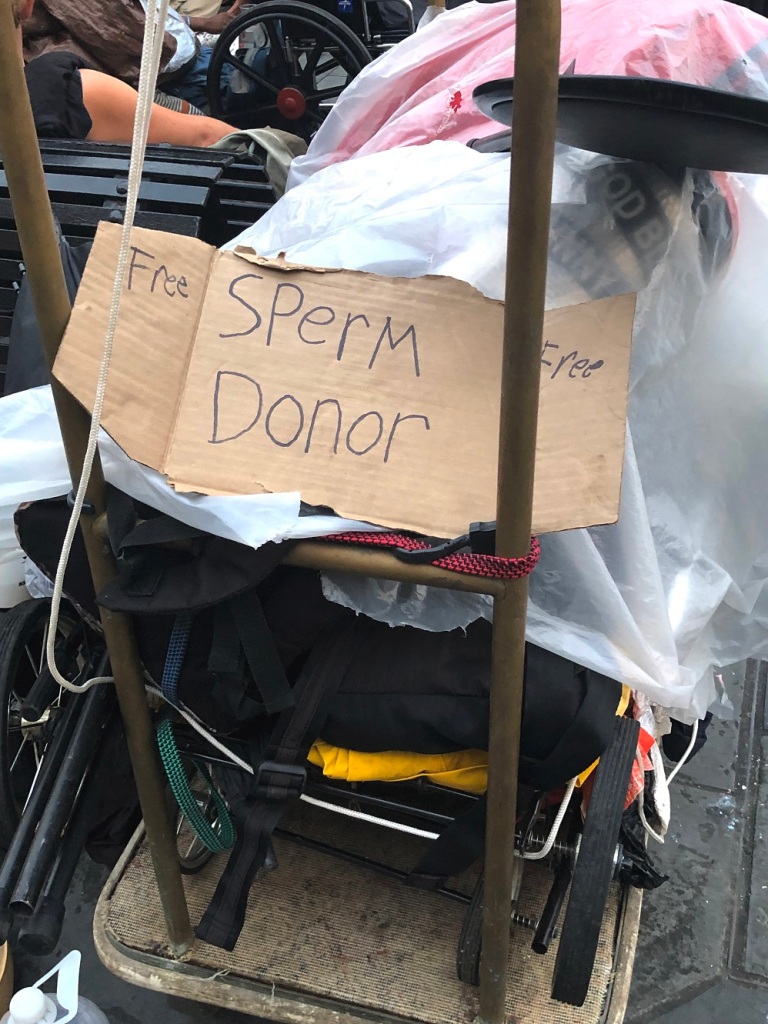 …it was Red Dress Race Day, which is an event that promotes drinking while running–running in a red dress.  While we did not witness the actual race, we did see a lot of the runners roaming around the French Market once the race was done.

To make sort of a trifecta of street intrigue, it was “hexfest weekend,” which promises a “weekend of witchery.”  Of course, this prompted protests.

We opted for relative normalcy… 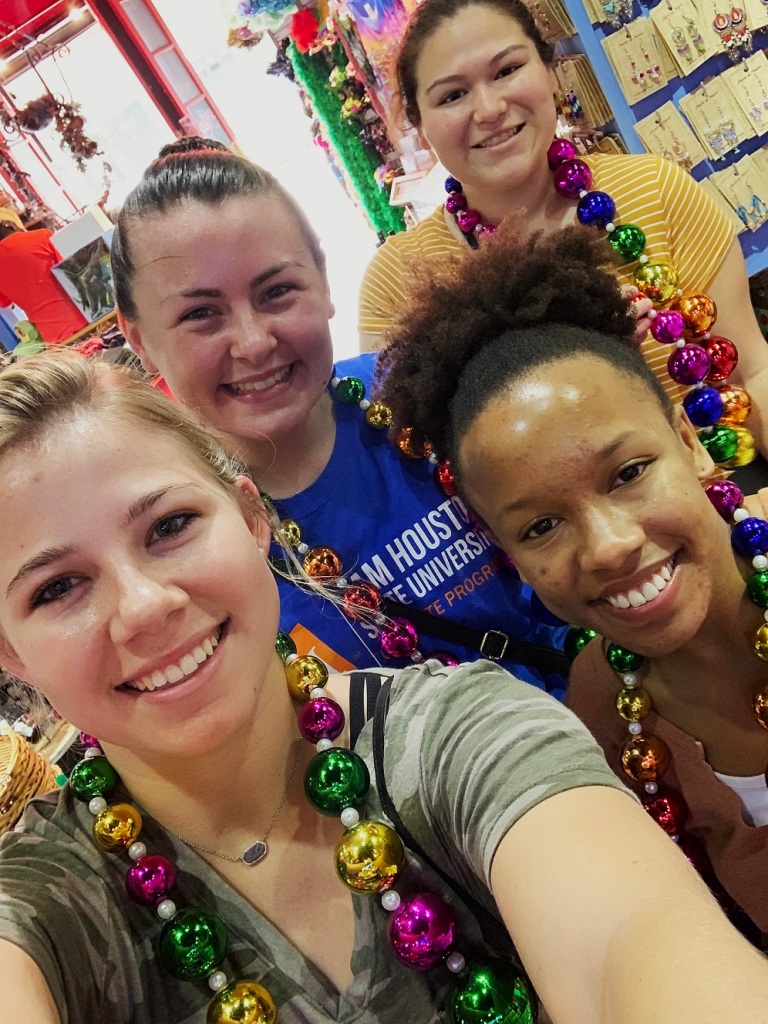 …but, while this was interesting, we had some learning to do….

Following our massive meal, we made our way to the National WWII Museum in New Orleans, a destination I have been looking forward to for most of the trip.

While Ms. Stephanie got our tickets, we took a few minutes to walk around the lobby and see some of the equipment on display. Notably, there was a Higgins boat. As the name suggests, this boat was designed by Andrew Higgins of New Orleans. He began manufacturing this design to explore the Louisiana bayous for oil and gas in the 1930’s. The boat was used in both Europe and the Pacific during WWII but is most known for its part in the Invasion of Normandy (D-Day) that allowed Allied men and vehicles to quickly exit via ramp onto shore. 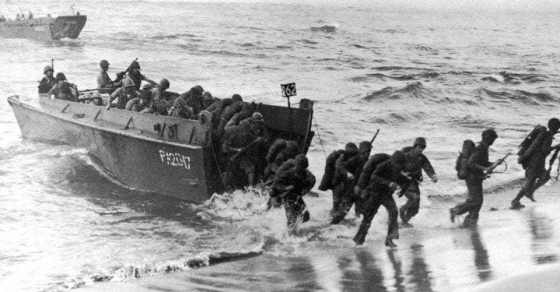 The World War II Museum is very expansive and even though we devoted two full hours to the Museum, we only had time to visit the third building: Campaigns of Courage: European and Pacific Theaters. Here we traveled through the immersive and interactive exhibits. First, moving through the battles of the Pacific, then moving onto the European front, we became mesmerized by the exhibits.

There was so much information to take in we could have wandered around all day!

The museum has continuous narrated footage from different battles and important events throughout the exhibit, detailing the experiences of different soldiers.

There were extensive displays of the attire from the different branches of the military and the terrain they encountered.

I enjoyed seeing the women’s military and nursing uniforms, and I especially enjoyed learning that women were allowed to assist in wielding and working on essential battleships and other machinery for the war.

Makayla and I came across the personal story of Desmond Doss, who was the Medal of Honor recipient that “Hacksaw Ridge” (2016) was based on.

“Hacksaw Ridge” happens to be Makayla’s “all time favorite movie” so it was exciting that she got to see Desmond Doss recognized in the museum as the first and only conscientious objector to receive the Medal of Honor for his courageous actions of carrying between 50-100 wounded infantrymen from the area they called Hacksaw Ridge during the Battle of Okinawa. 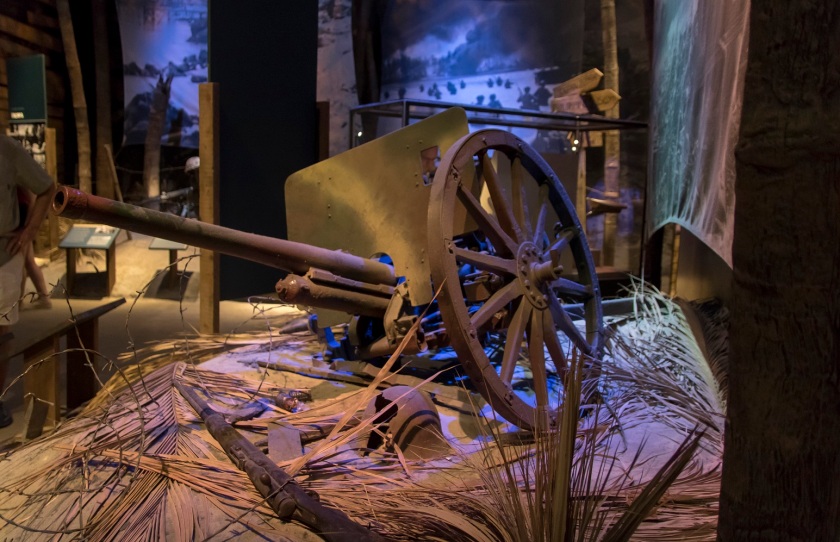 …but I really enjoyed having the opportunity to visit The National WWII Museum for the first time and I look forward to returning with an extended schedule. 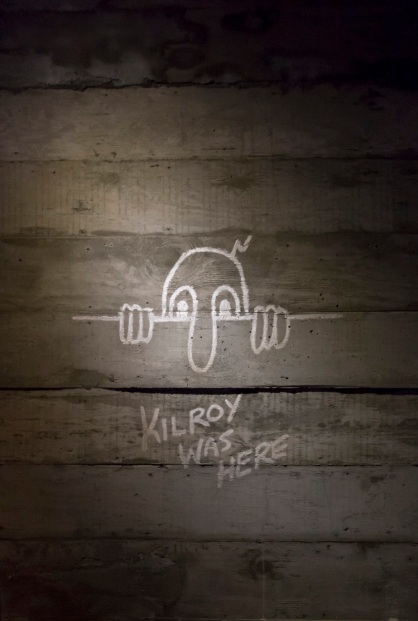 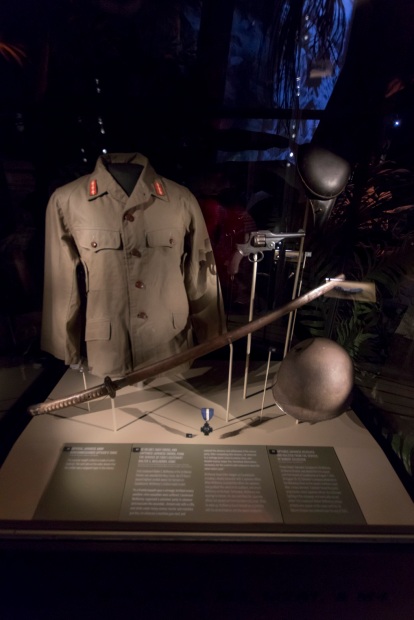 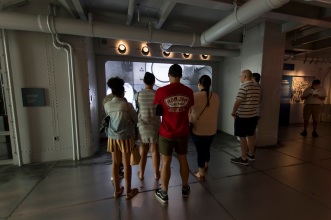 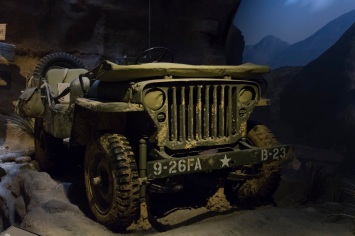 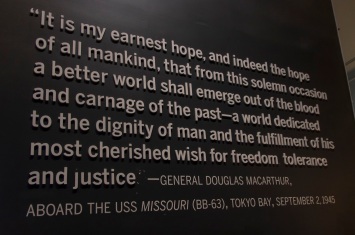 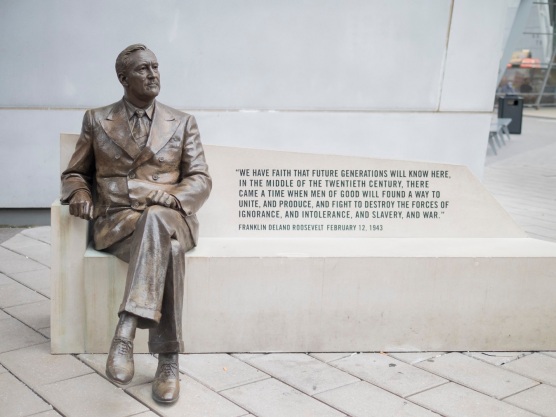 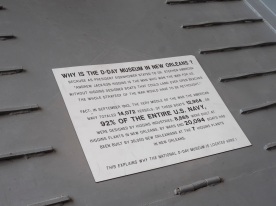 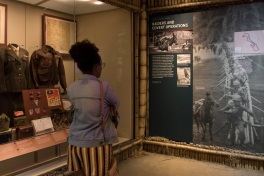 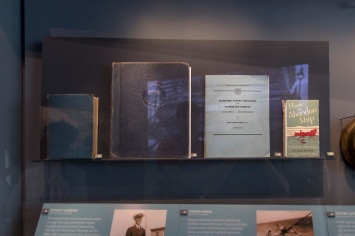 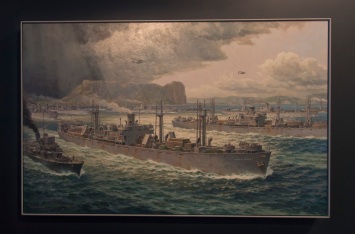 Up next, we headed to Sno-Bliz for a cool-down treat!

For a cool afternoon treat on a humid New Orleans day, we headed to the Uptown area of New Orleans near the Garden District to try “snoballs” from Hansen’s Sno-Bliz. Hansen’s Sno-Bliz celebrated its 80th year in operation, and is actually where the snow cone machine was invented.

The business was opened in 1939 by Ernest and Mary Hansen. While the operation is now owned and run by their granddaughter, Ashley. When we arrived the line was out the door, which is not uncommon for this James Beard Award winning establishment.

After waiting for not too long the line led us inside the shop where we were instantly greeted not only by the whirring of the machines but by the different articles and signs lined on the walls.

The flavors varied and some were more unique such a rosemary mint and honey lavender. The shop even gave us the option to put different toppings and combine the snoballs with ice cream (a “hot rod”). Maggie tried a hot rod root beer with condensed milk on top, Makayla went with a hotrod chocolate with condensed milk on top, while Ilexus tried Honey Lavender (a light refreshing option and my personal favorite). 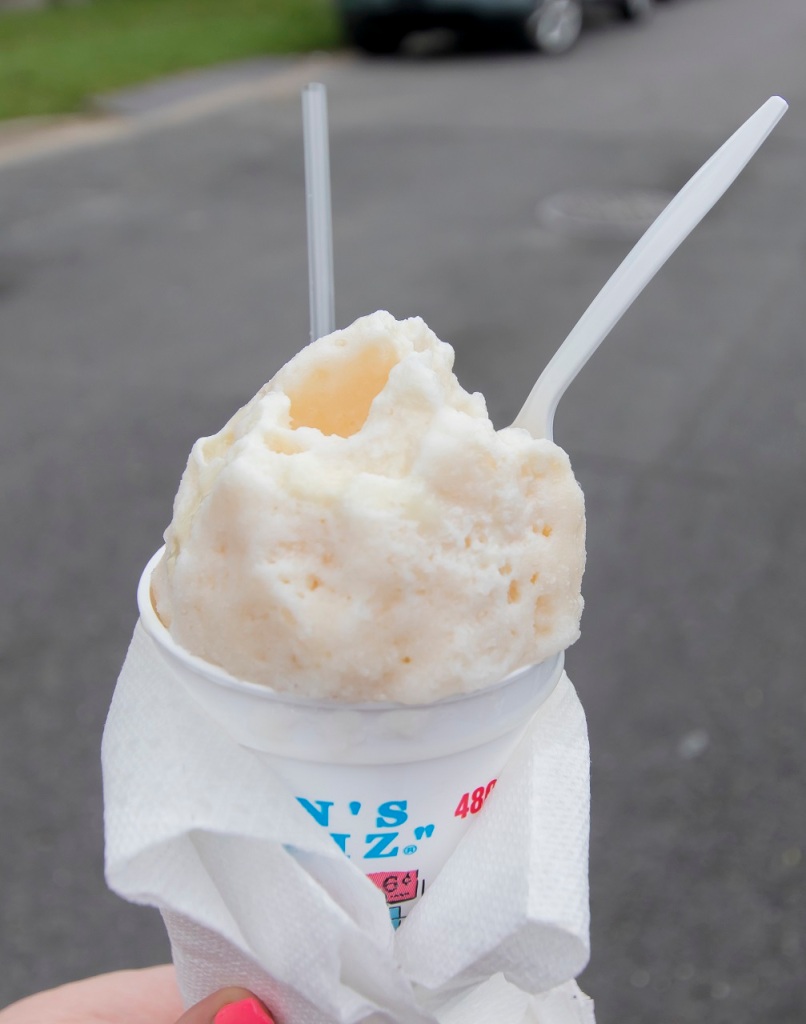 We all enjoyed our Sno-Bliz, which was is truly unlike any other shaved ice treat due to the layering of the light fluffy shaved ice and homemade syrups. Overall, we waited for 30 minutes, and the preparation of the sno-bliz took about 15 (we were a little indecisive) however, it was well worth the wait. Hansen’s motto is “There are no shortcuts to quality”, and that certainly holds true for their snoballs.  And while Hansen’s isn’t air-conditioned, it does provide “air-conditioning for the stomach,” providing us with a nice chill on a summer day.

This was a great stop for this hot New Orleans day. Following this stop, we went back to our hotel to prepare for our hair-raising ghost tour!

Disclaimer: most, if not all, of these stories are not based in fact.  We are passing them on as told to us.

We opted for a different type of summer chills, by paying for a “Ghost Tour of New Orleans,” which began the tour at Jackson Square where we met our tour guide, Valentine. As we began our tour, we were shocked at just how many ghost tours were being conducted. It seemed as if every corner had a big tour group hearing the same stories.

The tour consisted of seven stops that were all buildings in the French Quarter. Some of the stories were cheesy, but two of them we found pretty interesting.

The first one was Hotel Villa Convento.

The story is that the house was a brothel run by a madam and sometimes when men would go inside, they never returned. The men were often given a lot of alcohol, beaten, robbed, killed, and then buried in shallow graves. According to the local lore, the ghost of the madam now hunts the hotel. Interestingly, it wasn’t this part of the story that intrigued us the most. This house is rumored to be the infamous “House of the Rising Sun” described in the song by the Animals. The lyrics state:

“There is a house in New Orleans / They call the Rising Sun / And it’s been the ruin of many a poor boy And God, I know I’m one.”

The next story is about the LaLaurie House. 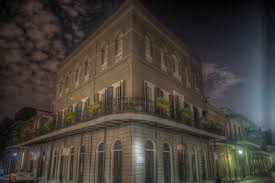 Again, according to lore, this home involves a tale of a woman who married for money and killed for pleasure. Interestingly, Nicolas Cage once owned and sold this property. The story, that may or may not be true, goes as follows: Cage was inside the house and saw a ghost, and he has been experiencing strange things ever since. The locals told Cage he was “cursed,” and that the only way to get rid of the curse was to be buried in New Orleans. This is supposedly why Cage has a pyramid-shaped tomb purchased in New Orleans. It is rumored that Cage called the building “ghost front property.” 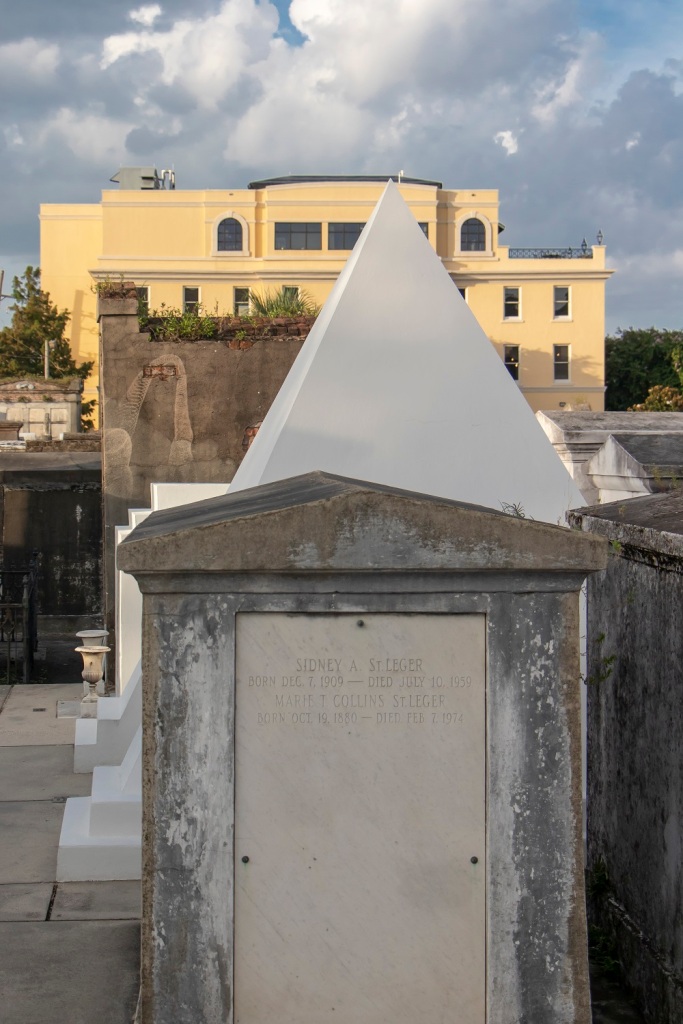 Although not as scary as we hoped, it was still an interesting tour! After receiving our dose of apparition tales, we decided to end the night with a restaurant we discovered on our scavenger hunt: Napoleon’s House!

After sweating a lot from the ghost tour, stepping inside Napoleon House for dinner was a relief.

We started with a cheese board that had Irish cheddar, swiss, and aged blue cheese with a tomato jam and garlic French bread. 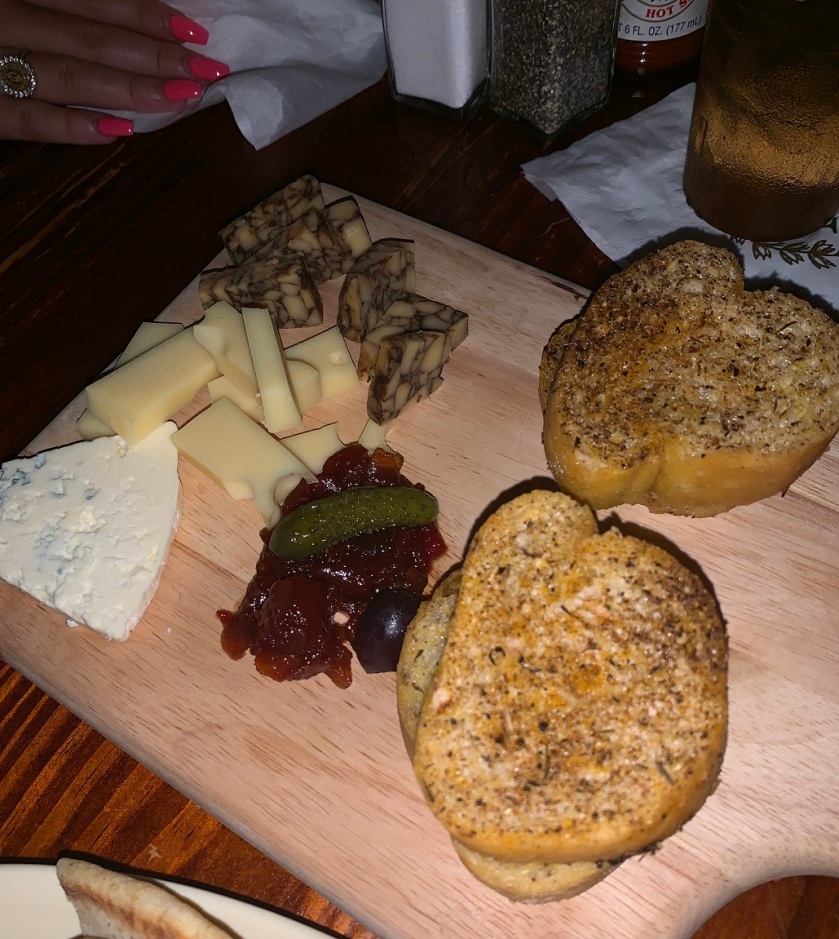 Because it was our last night in New Orleans, we wanted to try to check off some bucket list food items that we wanted to be sure to try on the trip. We ordered a Muffuletta which is a warm sandwich that contains ham, genoa salami, pastrami, swiss cheese, provolone cheese, and Italian olive salad. It was “invented” in New Orleans.

This was the fan favorite, even for Ryan and Miranda who do not like olives. We also ordered a Shrimp Po-boy (also invented in New Orleans) and Jambalaya. 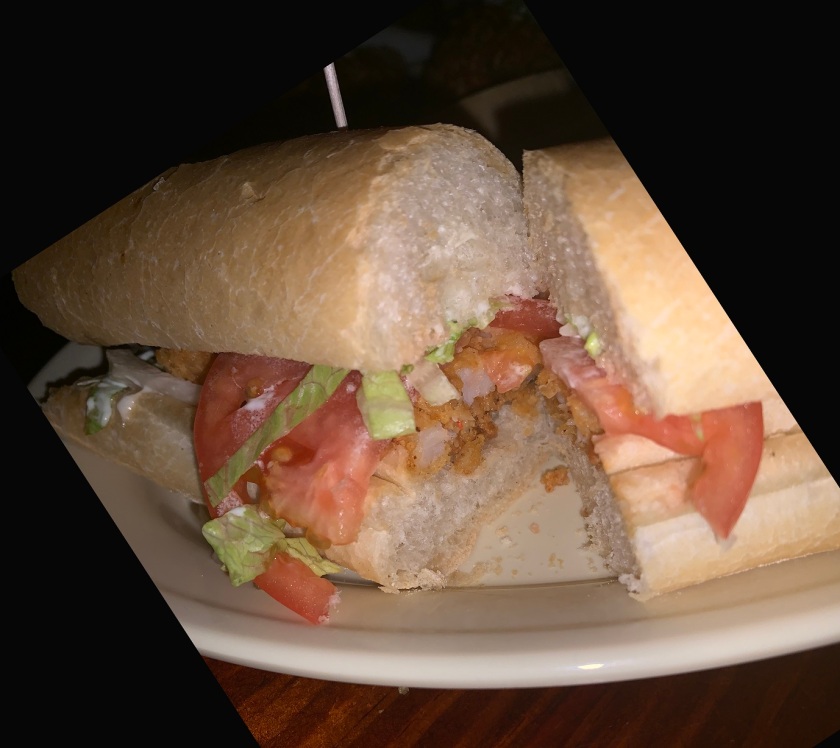 For dessert, we ordered Pistachio Cannoli’s, Bread Pudding, and Cassata which is a Neopolitan style ice cream cake with jelly candy filling. 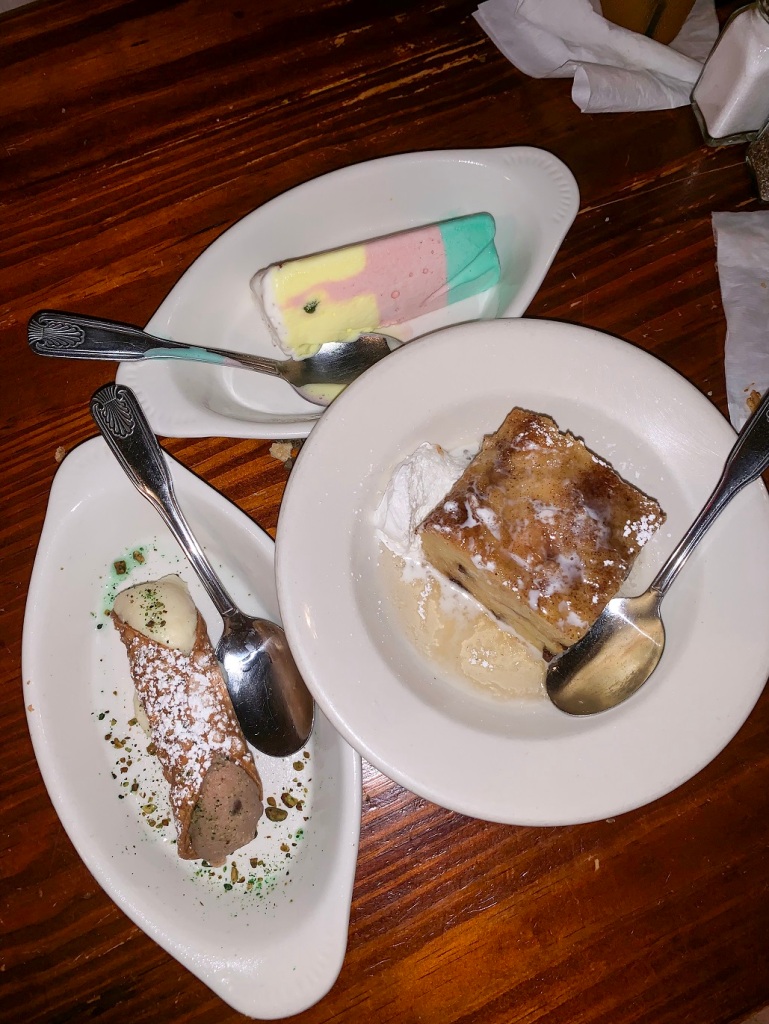 We then walked back to the hotel, excited for what tomorrow will bring!

Following our full day, we walked home down Bourbon Street.  Bourbon Street is almost a perfect microcosm of NOLA, with the same kind of people, only more numerous and more rowdy. 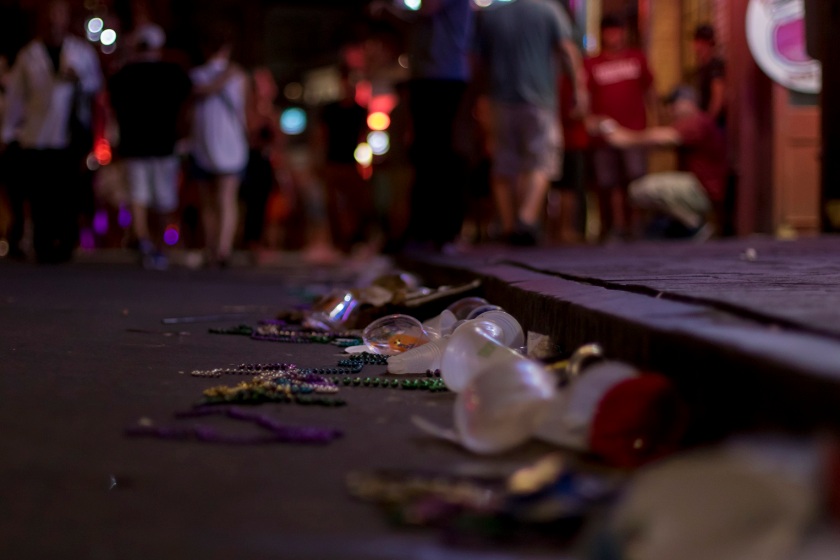 But we preferred to remember happier aspects of the day!