It was perhaps appropriate that Dr. Taylor was the keynote speaker, inasmuch as the event provided a political and community education for the SHSU students on hand, including myself and other members of SHSU’s Center for Law, Engagement, And Politics.  With our seats sponsored by Representative John Otto and Senator Charles Schwertner, we were able to converse with and learn from legislative staff.

Congressman Kevin Brady provided a thorough update on the US Legislature, particularizing on the push to create middle-class jobs in the US and on Congress’s recently-passed legislation to allow for construction of the Keystone XL Pipeline.

Dr. Taylor, while keeping with the national theme, focused on Reagan’s Republican legacy and, especially, “his optimism, his utter faith in this nation and her people, and his belief that our best days…are always ahead of us.” 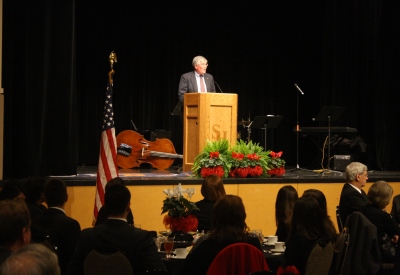 For students in their late teens and early 20s, it was an appealing message and an appealing evening.  It was an evening filled with lessons on President Reagan, the responsibilities of elected officials, and enjoyable conversations.

The LEAP Center at SHSU is a bipartisan organization offering unique learning opportunities related to fine arts, history, civil rights, literature and, in particular, law, engagement, and politics.  The students recently attended an event sponsored by the Harris County Democratic Party featuring Sissy Farenthold and former Governor Mark White, and will be touring Little Rock, Arkansas this week, with stops at Little Rock Central High, the Douglas MacArthur Museum of Military History, the Clinton Presidential Library and The Old Mill, the last surviving set of Gone With the Wind.