Each year, the Scowcroft Institute the Bush School hosts a summit on pandemics, which brings together experts who discuss the biggest challenges to successful responses to pandemics.

After introducing the guests, Dr. Blackburn…

…posed a number of questions to the panelists.  Dr. Tomori led off, noting the importance of responding to pandemics with speed and quality information and resources, and that this is especially true in remote areas, where resources may be scarce.

Dr. Parker then tackled the thorny problem of vaccinations.  He emphasized the importance of having development and dissemination plans.  While there has been much discussion of a vaccination for COVID, vaccinations are not typically easy to develop, nor are they often developed quickly (although not discussed here, I have read that the shortest time in history for the development of a vaccine is four years). 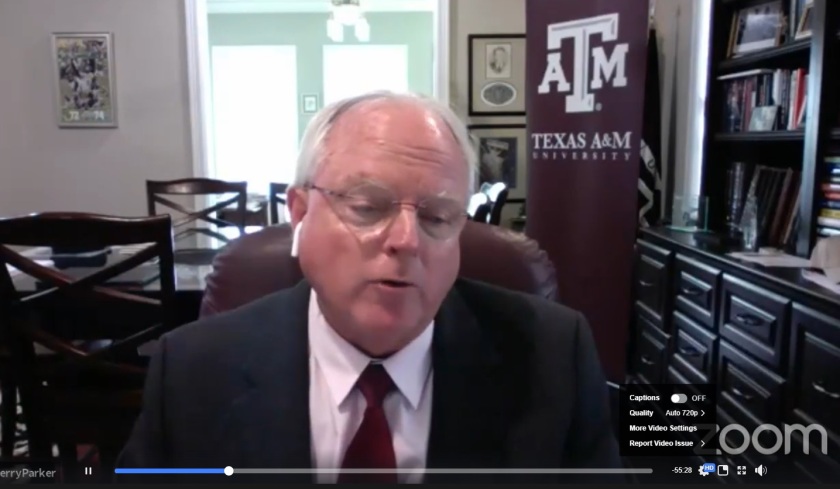 The keys are: (1) developing sufficient supplies, suppliers, and training to ground-level forces, and (2) distribution, which is the most difficult (“the final mile is the hardest”).  In the latter phase, Parker emphasized that vaccines are distributed all at once.  Vaccines have to be developed, and the supplies take time to get to everyone, so who gets the vaccine first?  Parker suggests, of course, health care workers, but a whole prioritization list needs to be developed for the entire rollout.  Also key is a plan by developed countries to get the vaccine to less wealthy countries, something that is both logistically difficult and sometimes politically fraught.

Professor Natsios elaborated on this with some interesting facts. First, he noted that the Russians were active on social media, using bots to spread messages both pro and con for vaccinations.  They know that, in a democracy, if you can confuse people to what the truth is, you can thrown democratic processes into confusion.  Further, polls show that approximately 30-50 percent of Americans indicate they are hesitant to avail themselves of a COVID vaccination.

The solution, according to Natsios, is to work with local leaders–religious, community, medical, even sports–and do publicity campaigns for vaccinations.

Dr. Blackburn switched topics, going to how to develop effective early warning systems in pandemics.  Natsios, who had extensive experience with detecting and responding to famines from his government days, also fielded this topic.

Noting that satellite photos could determine crop health and allow advance warnings for famines, Natsios pointed out that the same tools can be used for pandemics.  In a fascinating discussion, he pointed out that satellite photos of Wuhan, China from August of last year show increased vehicular ( (a measure that includes bicycles) occupancy in China hospitals.  Intelligence agencies have complemented this with social media content analysis, which shows a significant uptick in questions about symptoms–symptoms correlating strongly with those produced by COVID–at the same time.  The conclusion, of course, is that COVID was probably hitting Wuhan in August of last year, before the world–and probably even China–knew about it.  These remote sensing tools (which include monitor of cemetery and crematoria activity) can be useful in detecting pandemics early.

Natsios concluded by emphasizing the importance of early detection, noting that if the pandemic is caught in time, its contagion can be extraordinarily curtailed.

Dr. Blackburn then fielded questions from the audience, which included:

This fascinating and timely discussion can be viewed here in its entirety and the white paper can be found here.  Thanks again to the Bush School for its wonderful programming!