After an intense 24 hour period competing and observing Moot Court proceedings, the LEAP Ambassadors, Moot Court participants, and members of the pre-law cohort decided to relax a bit, explore the history of Dallas on a Segway, and fill their bellies.

The relaxation involved some downtime at the hotel, followed by an ice-cream treat.

Shortly thereafter, another treat was in order.  We stopped by Segway Nation for a tour of Dallas on a segway.

It was a beautiful time of day, what movie-makers call “magic hour,” and we made the most of it with pictures.

But, of course, with it turning a bit dark, Austin felt he need to serve as a protector of the group, and adopted a secret-service/tough guy look.

At first, not everyone felt totally relaxed…

…but eventually everyone got the hang of it, and we headed off to see Dallas.

The segway tour took us to Pioneer Plaza, a large outdoor sculpture that consists of 49 bronze steers and 3 riders created by sculptor Robert Sommers.  Note that it appears that Alex is saluting when, in fact, that it is a longhorn projecting in front of her face.

The tour, led by excellent guides Doug and Jack, also took us by I. M. Pei’s Dallas City Hall, where we were able to turn and see the beautiful Dallas skyline which, according to our guides, is regularly listed as one of the five most beautiful in the US.

The tour also took us by the Kennedy assassination site on Elm Street.  The students had a chance to get off the segways and walk to the “X” spots, which mark where the Oswald’s shots hit Kennedy.

We also entered the Kennedy Memorial, designed by Philip Johnson, one of the great architects of the 20th Century.

Speaking of Johnson, we were also able to go to Thanksgiving Square, a public space he designed in the 1970s as a means of racial and cultural healing.  With a replication of Rockwell’s “Golden Rule” painting…

…and the “Ring of Thanks,” where visitors are encouraged to stand and offer thanks.  From the center of the ring, the sound reverberates, symbolically echoing the many things for which we are thankful.  In our group, thanks went to family, opportunities, school, and even the LEAP Center.

Thanksgiving Square also has a spiral chapel adorned with one of the largest stained glass assemblages in the world.  The glass, designed by Gabriel Loire of France, is designed to become brighter as it ascends and moves to the center. 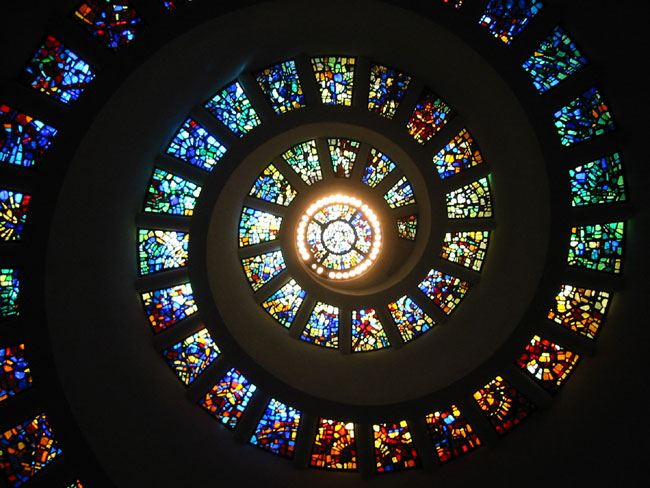 In the midst of such beauty, it was easy to be thankful.

And with that, we returned to the segway base, where we shed our helmets and headed to Hoffbrau Steaks (thanks for the recommendation, Doug!) and enjoyed a robust end-of-the-day dinner.

But before heading out we gave a few more thanks: to our LEAP Ambassadors, who came to Dallas to cheer on their Moot Court friends; to the Pre-Law cohort, who came to check out the action and consider joining the team for next year; for Kristyn, who decided to stick with the “team” rather than go home; and to our coach, Jean Loveall, who spent a lot of time teaching us the finer points of law.