Not much happens in Little Rock, Arkansas at 5:00 am, LEAP students were thrilled to find out, as we left the City of Bridges early enough to spend the day in St. Louis, Missouri. After passing the six-hour drive sleeping the scenery away, we made it to the “Gateway to the West” around lunchtime, grabbed a quick bite to eat, and headed straight to the landmark for which the city is best known

Undaunted, we embraced the moment, commemorating with a photograph.

We then proceeded to hop into a pod that transferred us from underground into the skies of the city.  I (Constance) don’t care for the pod much.

After a five-minute ride, we disembarked, climbed a few stairs, and were confronted with windows to the east overlooking the Mississippi and beyond.

On the opposite side, we enjoyed a bird’s eye view of the Old Courthouse, Budweiser Park, the Wainwright Building, and the Edward Jones Dome, home to the St. Louis Rams. 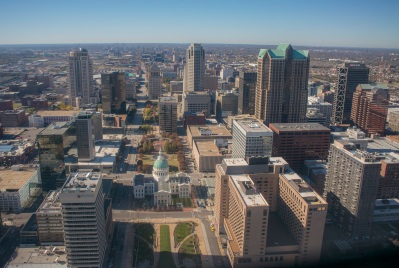 These views come courtesy of small windows in the middle of the arch.

Taking in our fill of the city, we snapped a couple selfies and got back in line to descend to the bottom once again.

We left the Gateway Arch to return to the Old Courthouse, where the Dred Scott trials occurred in 1847 and 1850. Construction began in 1816 but was not completed until 1828 by the firm of Lavielle and Morton. Since the first completion, Henry Singleton added an addition of three wings and a center cupola dome in 1839, which lasted until 1851, when the east wing was replaced.

Known for not only the Dred Scott case, the Old Courthouse was also home to slave auctions until 1861. While inside, we explored the different wings of the courthouse, admired the beautiful staircases…

and different structural intricacies, and posed for quite a few pictures as well. 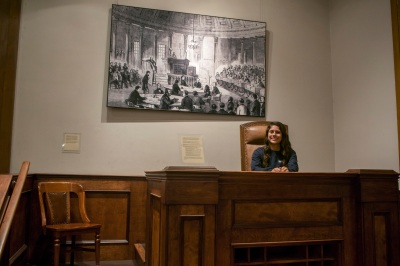 The courthouse differs today from the 1839 version because William Rumbold replaced the cupola with a dome in 1861, modeled after St. Peter’s Basilica in Vatican City.Standing in the center of the main hall looking up, we had the chance to view the dome from the inside-purples, blues, pinks, and greens all around.

After spending as much time as we could inside, we headed out to venture back to the car and drove outside of the city to the most anticipated tour of the day, a Frank Lloyd Wright home.

We arrived at Ebsworth Park and drove through a winding driveway to arrive at our destination and learn more about Frank Lloyd Wright. Born in 1867, Frank Lloyd Wright was an internationally known architect in the early to mid 1900s. He built homes and buildings after learning from and working for Louis Sullivan, who is known for his work with skyscrapers and who built the Wainwright Building in downtown St. Louis. Wright built the home in Ebsworth Park for Russell and Ruth Kraus, a modest couple who doubted they had the funds to afford a home from such a well-known figure in architecture. Instead, the architect surprised them with his acquiescence and proceeded to plan them a Usonian home. Known for its affordability and political implications, Wright’s Usonian theme, seen throughout the United States, encompasses smaller homes, with only one story, usually no basements, attics, or garages, and just enough space to be efficient.

The home is laid out in grids, with parallelograms serving as the major building motif.  Within the parallelograms, however, are embedded triangles and hexagons, and these three shapes make up the shapes in the home.  In fact, there is only one ninety-degree angle in the home (the bathroom); the rest of the home’s angles are either 60 degrees or 120 degrees. 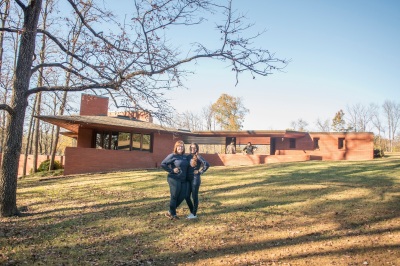 We learned of Wright’s use of compression and expansion as we walked through the tight entryway and entered the spacious main hall of the home. Docent Dave Baumgartner, a former architect in St. Louis, made the tour very enjoyable and provided much insight into the particulars of Frank Lloyd Wright’s architectural plans.

Low tables and chairs, great windows, and open space pulled our view towards the outside of the home and into the great forest beyond.

In addition to the beauty of the home… 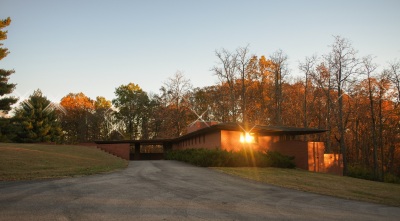 …we learned various innovations produced by Frank Lloyd Wright (e.g., larger bathrooms), the creativity he used to fit his homes to his ideas (in this case, he created a parallelogram bed for the Krases), to the meticulousness with which he planned out every detail (the screws in the home lined up with the angles produced by the home’s grid).

We were awed by his presence still pervading the space to this day and left with minds blown by the genius that was Frank Lloyd Wright.

Intriguingly, St. Louis is also home to a building graced with a three-sided Richard Haas mural, fronted by a strange sculpture of a high-stepping jackrabbit (not done by Haas!).

Haas’s mural, which depicts a woman as “Peace”…

…has eight obelisks and  numerous other adornments. 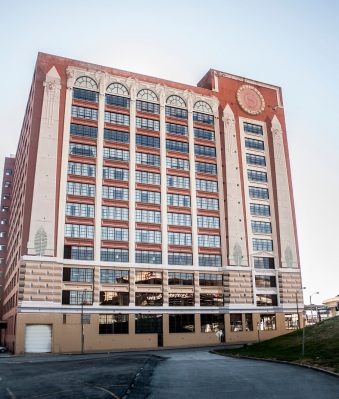 We were also able to spend time in St. Louis’ beautiful downtown “urban park and sculpture garden,” Citygarden.  Incorporated into the “Gateway Mall” area, the park is bordered by Eighth, Tenth, Market, and Chestnut Streets – just a short walk from many locations within a downtown area that is actively trying to tie together green spaces and government structures, common spaces and the corporate sphere.

Part of our group was fortunate enough to spend some daylight time in the park, with the sun setting alight the fall colors in many of the park’s varieties of trees.  The procession of gingko biloba trees (also known commonly as maidenhair trees) positively glowed along the Market Street promenade, their yellow leaves glinting off the last of the sun’s rays.

The entire group paid a visit just as the sun set early on the first night of Daylight Savings Time for 2015, with the park’s lighting creating interesting shadows on several of the pieces, such as Fernand Leger’s Femmes Au Perrequet…

Constance impersonated (can you impersonate a fictional wooden figure?) Pinochio… 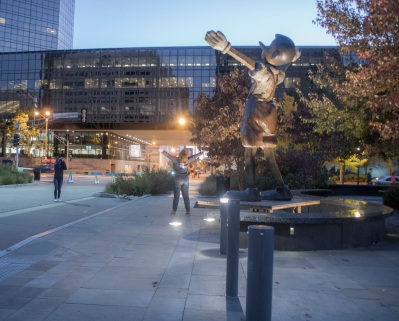 And Professor Yawn was proud that his pupils, Alex and Constance, finally and truly lived up to their name, serving as pupils in Igor Mitoraj’s Eros Bendato.

…and the reflecting pond with stepping stones…

We even saw a rabbit! 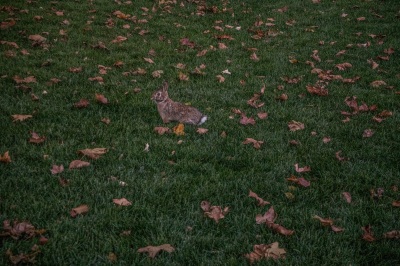 The park is a must-see if in St. Louis.  Even a short stroll through the beautifully landscaped space evokes feelings of tranquility within.  Park maps that provide info on all the art pieces are available; or one can download the app, with even more information on the park’s amenities and scheduled events. 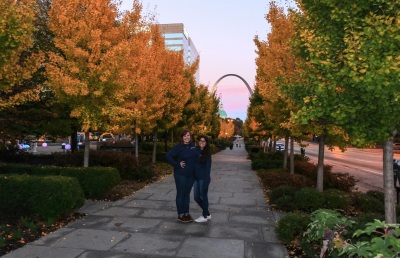 Before leaving, we took another brief stroll to “The Runner,” the statue celebrating the country’s westward expansion.  We had stopped there earlier in the day…

…and had some with photographs…

Well, we had some fun again, at the end of a long day, but in the midst of a fun trip.