We began our morning enjoying breakfast at a local favorite, Marigold’s. Known for their creative breakfast options, we loaded up on coffee, an omelet, some pancakes and fresh squeezed orange juice. It was, according to Alex, the best orange juice ever.  The food was good, too, a fact attested to by Constance, who breakfasted here last year, and now has two years’ worth of data on which to base her conclusion.

Hurrying back to the hotel, we made it back in time for the first session of the 2015 Film and History Conference.  Like last year, it was well organized by Loren Baybrook, Professor at University of Wisconsin, Oshkosh.

Alex and I chose the session titled, “Generational Dilemma: Situating Women and Young People, a Transitional Age of TV.” One of the first things we noticed is that the dress code is pretty relaxed for a professional conference.  We heard from three different panelists discussing young people on TV, domesticity in sitcoms, and utopia in 1960s television.  All of them read more or less directly from their papers.

First, Mr. Michael Cheyne read his paper about the power in domesticity, the gender inequality as a public problem in sitcoms, and the vindication women achieved in shows like “Father Knows Best,” once women finally embraced their role in the home as a housewife, further constraining them to society’s view. Second, Ms. Caryn Murphy spoke about attempted utopia in the 1960s sitcom “The New People.”  Finally, we heard from Daniel Long about “The Failure of Displacing the Young People on Network TV,” in which he discussed ABC’s efforts to gain influence amidst networks like NBC and CBS, while also identifying social issues and confronting them during programing like “The New People.”  Overall, we learned about the different issues important to our peers in the late 1960s, while also acknowledging the line networks had to balance in order to stay relevant.

Listening to the panelists speak certainly awoke our hunger, so we left the conference briefly to eat a truly Wisconsinite lunch at The Old Fashioned. We tried fried cheese curds…

…beer and cheese soup (which, intriguingly, is sprinkled with popcorn)…

Satisfied, we left the restaurant to hurry back to the conference for the afternoon.

Our second session of the afternoon was titled “Journeys of Love 1: Romantic Comedy”, which we definitely enjoyed. Before we attended this session, however, we ran to Professor Yawn’s presentation and took a photograph. 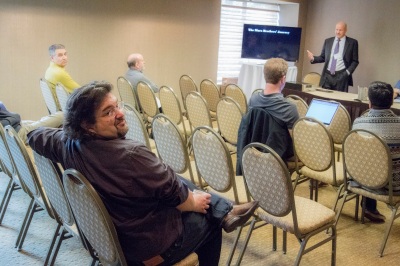 We then backed out, somewhat conspicuously, and returned to our regularly scheduled program.

Megan Miskiewicz from Northwestern University was the first speaker for the panel. She discussed marriage timing and economics in romantic comedy films from 1936-1941. To do this she had to answer three questions: who to marry, when to marry and what to do after marriage? She referenced the film “Ball of Fire”, which starred Gary Cooper and Barbara Stanwyck to answer the question of whom to marry. (Interestingly, Dana Andrews is in this film, and the LEAP Center presented a Dana Andrews film festival in 2009 and 2013.) 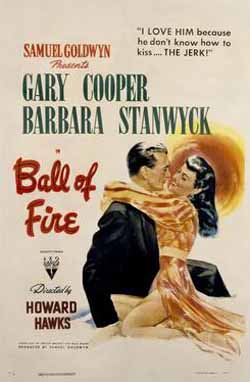 In this film, as with many films from the 1930s, the key question for women was, “Whom should I marry?”  She pointed out a concept that occurs repeatedly, which is “the hope that something better is just around the corner”.

Deborah Doderlein from the University of Oslo, Norway focused on the film “Guess who’s coming to Dinner,” which was about an interracial couple and all that they must overcome to marry. We enjoyed the romantic theme of this session greatly, which consequently meant we took a bit more away from the presentations.

We left the second session of the day to run across the street of the hotel and hop on the 2:00 o’clock tour of the Wisconsin Capitol building. Wisconsinites pride themselves on their state house and made a point of making it completely accessible to the public. There are no metal detectors, and all entrances are open to the public; that is, there are no “reserved sections” for “staff and elected officials only.”

We began the tour in the rotunda of the house…

…under the largest dome known to any capitol in the nation and also the largest granite dome in the world.

The dome makes for a beautiful rotunda scene, enhanced by murals reflecting the various branches of government, all of which were housed in the state capitol.

The walls, columns, and exterior of the capitol boast 43 different types of stones from six different countries and eight states. Completed in 1917, the building is the fifth to serve as the capitol building of Wisconsin and, more recently, underwent a 158.8 million dollar renovation that lasted fourteen years. Sitting at 284 feet and 5 inches from the ground, the magnitude of the building is offset by the quiet subtlety found inside. Alex noted that this might be her favorite capitol visited yet, a nice contrast to some of the more ostentatious capitols we’ve seen.

We walked up to the second floor to visit the House Chamber, which boasts a thirty-foot skylight…

…and another Blashfield mural depicting important events in Wisconsin’s history. 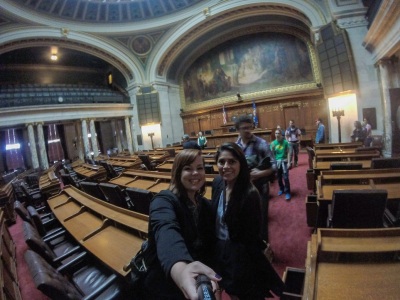 We moved on to the Senate Chamber, which sits in a circle and is technology free. Second to last, we visited the Supreme Court, with four murals by Albert Herter, who painted his son into one of the murals and whom later went on to be U.S. Secretary of State during the Eisenhower presidency.

Finally, we ascended multiple flights of stairs to enjoy the view of Madison from the observation deck.

Although both afraid of heights, we thoroughly enjoyed the multiple photo opportunities from the great vantage point. 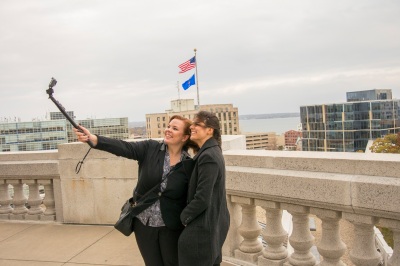 Although it was windy… 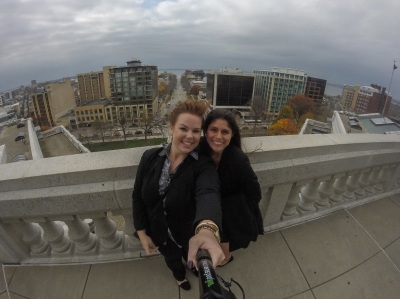 …it was still a lot of fun.

Finishing up at the capitol, we walked around the square, past a few unnerving Guy Fawkes Day protesters…

…and arrived at the Madison Museum of Contemporary Art. Sadly, we were unable to photograph the pieces we saw, but did enjoy the opportunity to experience a new channel of art. We were greeted by a horse sculpture by Deborah Butterfield made out of sticks and mud. We have previously seen Butterfield’s works at the New Orleans Museum of Art, UT’s Campus, and in Des Moines’ Papajohn Park. 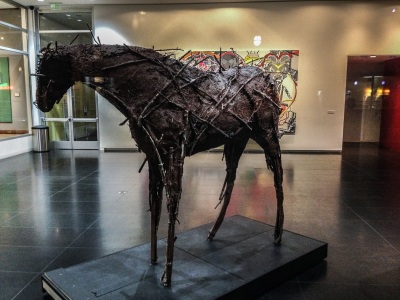 We ascended glass stairs to enter the main exhibit hall, where we found work from artists like Andy Warhol, Roy Lichtenstein, and Diego Rivera. It was a small gallery, but we spent a bit of time learning about new artists and appreciating the social implications of such art before leaving the modern art museum and heading back to the hotel for the rest of the conference.

The last panel that we attended was titled “Indie Film II: Indie and performance: Changing contexts, Changing strategies”.  Diane Carson from Webster University spoke first about Independent Film director, John Sayles’, films. She focused on the fact that he refused to hollywoodize his films even though he knew that they would not make as much money. She also noted that race issues occur often in his films and that he said “ you can’t avoid it if you’re going to make a movie.” One additional point that Diane mentioned was that Sayles does not sugar coat real social issues and that she hoped that her presentation made us want to go watch his films. The second speaker was Cynthia Baron from Bowling Green State University, who focused on a film called “Set it Off” that focused on women editors in indie films. She noted that indie films used popular actors to gain more views like Queen Latifah and Jada Pinkett. To keep her presentation interesting, she showed a few video clips of the film. The third presenter was Chris Holmlund who focused on casing indie actors. She chose to talk about four main actors, John Cusack, Michelle Williams, Lupe Ontiveros and Giancarlo Esposito. She spoke about how actors play social roles because of whom they are and how they look. All performers are not created equal due to their race, body and other identifying characteristics that limit them to specific roles. An interesting way to show this was by informing us that Lupe Ontiveros’ roles were 90% of the time maids. She ended her presentation by arguing that independent films truly allow actors to work.

Following the afternoon of capitol touring and indie film education, we were ready for an adventurous dinner at “A Pig in a Fur Coat”, where we learned about the world of Tapa restaurants. We ordered two snack plates, Duck Fat Fries and Meatballs. All of the food served at A Pig in a Fur Coat was distinctive and different from anything that we had tried. The meatballs for example, included bone marrow, which at least two of us did not particularly enjoy. After our snack plates, our Small Plates arrived. We tried the Pork Belly with shrimp and butternut squash, filled with different and delicious flavors; it was on the smallish side.

the Ravioli filled with duck egg, and topped with bacon, Brussels sprouts and butter, and the Foie Gras Mousse, a bombolini with lard and fig. In the spirit of a Tapa restaurant, we all shared and had a taste of each other’s food. Alex was not a huge fan of the Foie Gras, and was even less so when she found it was made from fattened duck livers.

A Pig in a Fur Coat was much different from expected and was a great place to try new things.

After dinner we decided to return to DLUX for their amazing milkshakes! We sampled the toasted marshmallow with chocolate, Red Velvet Milkshake and the Salted Caramel milkshake.

On a full and satisfied stomach, we decided to walk around the Capitol building… 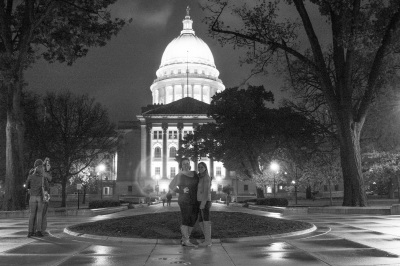 and snap some photos in the cold weather (editor: it wasn’t cold) before…

…retiring to the hotel in anticipation of a full day of driving tomorrow.