President George H. W. Bush referred to photographer Mark Burns as a “modern-day Ansel Adams” and, judging from the 59 photos included in the National Parks Photography Project, the former president was spot on.

Burns conceived of the project about 6 years ago, developing a plan to photograph all 59 parks in Black and White.  After putting together an advisory committee, Burns embarked on a trek that took him to parks in 27 states plus American Samoa and the US Virgin Islands.  Although a handful of photographers have captured the beauty of the park system in color, Burns is the only photographer to shoot all 59 parks in Black and White.

The exhibit opened at the Bush Presidential Library in 2015, and it opened with a splash.  Ken Burns was there. 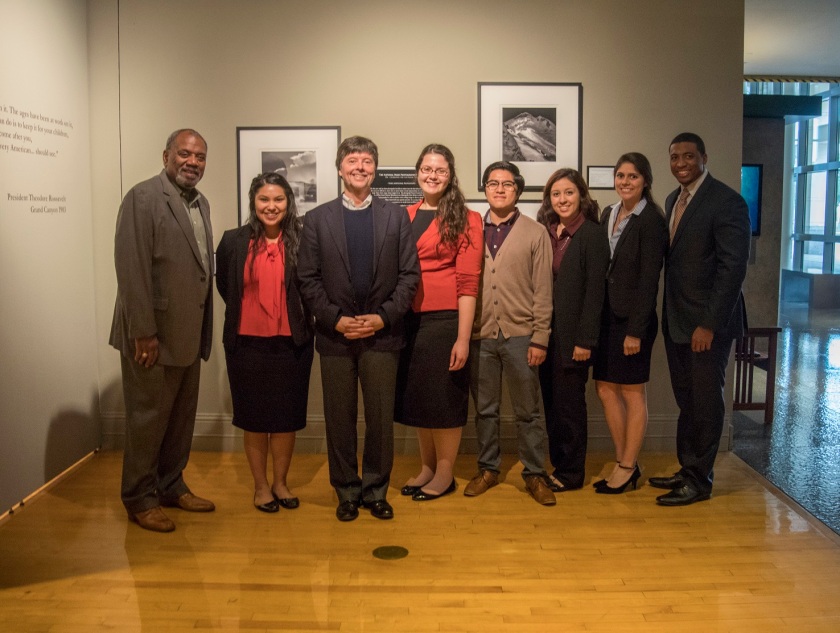 President Bush was there.

And Mark Burns, with his 59 photographs, were on display.

The LEAP Ambassadors were on hand for that event, and we had the chance to meet Mr. Burns.

Even more fortunately, the Sam Houston Memorial Museum was able to schedule Burns’ exhibit for March, April, and May, and the LEAP Ambassadors were able to volunteer for the opening.  Although the Bush Library certainly is majestic, the Walker Education Center held its own.  For one, you can see Burns’ 25 foot panorama of the Grand Canyon when you walk into the foyer.

Moreover, when you walk into the gallery space, you see all 59 parks at once.  It’s almost overwhelming, but the gallery also has enough space to allow individuals to get up close to the photographs, and that’s exactly what the attendees did.

One of the virtues of the event was that Burns spoke with dozens of people individually, answering questions about his equipment, the logistics of getting to a spot, or interesting facts about the parks.

There were also several student groups who showed up and asked for an interview with Mr. Burns…

And Kyle and Robin Britt were on hand from Houston.

Kyle is a member of Mr. Burns’ advisory committee.  He has seen all 59 National Parks, and his wife, Robin, has seen approximately three dozen of the parks.

Toward the evening, a core group got together for a photograph… 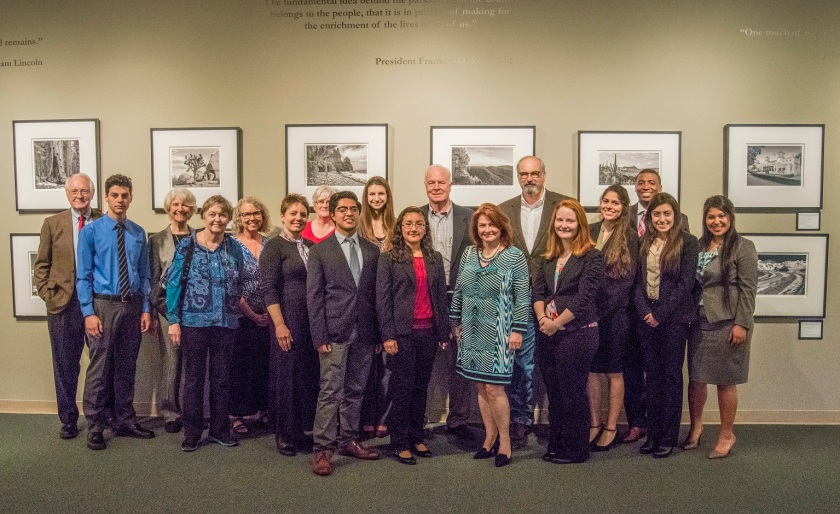 …and then we headed to dinner at 1836 Steakhouse, which we really can’t say enough good things about.

It’s not often you get to learn from true experts in fields and learn in an up-close and personal fashion.  Last night was one of those opportunities, and we learned a lot about photography, but also about the National Park System, planning and organizing projects, and the environment.

We’ll have a chance to see Mr. Burns again tonight at “Let’s Talk.”  His table sold out quickly, so we weren’t able to get seats, but we’ll get to see him again, and we have two more months to make repeat visits to the Walker Education Center to see his amazing photographs.