After enduring the journey of the LSAT two days prior, Megan and I were ready to go on a different type of journey, one that involves beaches, baseball and sun! We packed up the car and headed to the Lower Rio Grande Valley—with planned first-day excursions to Victoria and Corpus Christi along the way.

Arriving in Victoria, TX around noon, we drove through a beautiful neighborhood filled with mostly Spanish architecture before arriving at our lunch destination, “The Pumphouse,”a river-side restaurant.

We began our meal with Fried Jalapeno Mac and Cheese wrapped in bacon, along with Shrimp Kisses, fresh gulf shrimp stuffed with pepper jack cheese, a jalapeno strop, and also wrapped in bacon.

Our entrees were just a wonderful.  Professor Yawn enjoyed the fish tacos filled with mahi mahi; 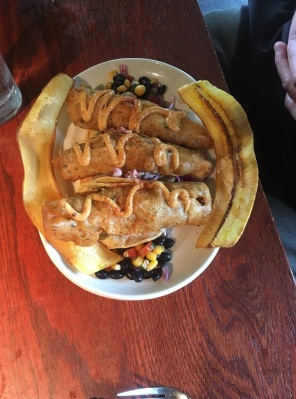 Megan adventurously tried the Monte Cristo, with grilled ham and cheese and roasted turkey on toasted brioche with melted cheese and a cinnamon burgundy drizzle.  I, on the other hand, went for the ribeye sandwich, which was very tasty.

The restaurant is notable not only for its food, but also for its history.  The property was originally owned by the Republic of Texas and was signed over to the City of Victoria by none other than Sam Houston, the President of the Republic.  The property remained in the City’s possession for some 170 years, serving as the “pumphouse” to the City.  In 2010 it was bought by its current owners and repurposed to a restaurant.  We are glad it worked out that way.

Corpus Christi is known for its seaside location, with beautiful beaches and the nation’s 5th largest port (in tonnage).  We learned about both in our brief time here.

We began our field trip with what we hoped would be a leisurely stroll to the beach.  Turns out, while we were 100 yards from the seashore, we were quite a distant to a swimmable beach.  When we realized the actual distance, we tried Uber—which showed no available drivers—and then successfully hailed a cab.  It was a pretty beach and the water was nice…

…although after about 30 minutes of swimming, Alex felt something bump into her back.  The something was a jellyfish, and after that encounter, we noticed many, many more.  With that, we called it a day, and headed back to the hotel to prepare for the night’s activities.

Everyone knows summer in Corpus is beach-time, but it’s also baseball season.  Corpus serves as the Houston Astros’ AA affiliate, the Hooks.  The team plays at Whataburger Stadium—Corpus is home to the original Whataburger—which is very family friendly.  The stadium has a water park, a swimming pool, a rock-climbing wall, and a Whataburger restaurant.

Before the game began, we got a few pictures, one with the world’s largest statue of a baseball player…

…and one with the team’s mascot!

We also learned to keep “score.”  Keeping score is different than keeping up with what the score of the game is; it actually involves a series of notation identifying the play-by-play unfolding of the game. We learned the basics in the first three innings, watched the game and a spectacularly evolving sunset, 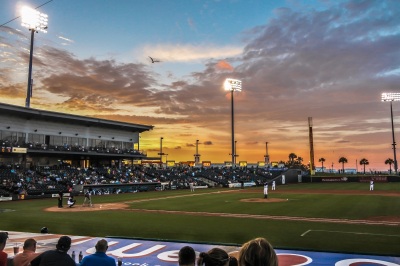 at which point we were joined by Shelby O’Brien.  Ms. O’Brien is a former Austin Intern for the LEAP Center, and now works in the District for Representative Todd Hunter.  She educated us with interesting information about the area and offered us valuable advice for future internships.  It was a pleasure getting to her know her while also learning more about the community. 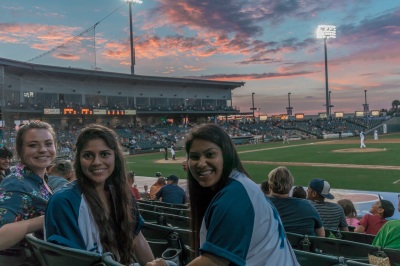 As an added bonus, Derek Fisher hit a three-run home run in the 8th for the Hooks to win the game 6-3.

On the heels of victory, and eager to learn more about the legislative process—in the district and in Austin—we joined Shelby for dinner at a place she recommended: Water Street Oyster Bar.  It was as good as lunch!  We had Oysters Rockefeller and Shrimp Picayune for appetizers, and they were amazing!  The Picayune was interesting and confusing, mixing both cayenne pepper and brown sugar.  Professor Yawn ordered it at Shelby’s suggestion.  It was good to see Professor Yawn have the opportunity to try something new, since he is encourages us to try new things.  Apparently, he had also encouraged Shelby to try new things in Austin, as well, and now the tides had turned.

As for me (Alex), I enjoyed the Blackened Chicken Fettuccine filled with creole spices and topped with a garlic cream sauce, and Megan enjoyed fresh sushi.  Not only did we learn that Shelby had amazing taste in food, but she was a pleasure to talk to, and it was particularly nice that she accompanied us to dinner despite an intense and long day (beginning at 6am).

It was a long day for us, too.  But despite the late hour, we made our way by the original Whataburger for a quick photo of the only double-decker Whataburger in the world.