It’s not easy to prioritize your time in a City when you have just five hours to spend, but we did a pretty good job of it.

Our morning began by visiting The Texas State Aquarium. As a fish enthusiast, Megan was especially looking forward to this underwater adventure. We began with a shark exhibit… 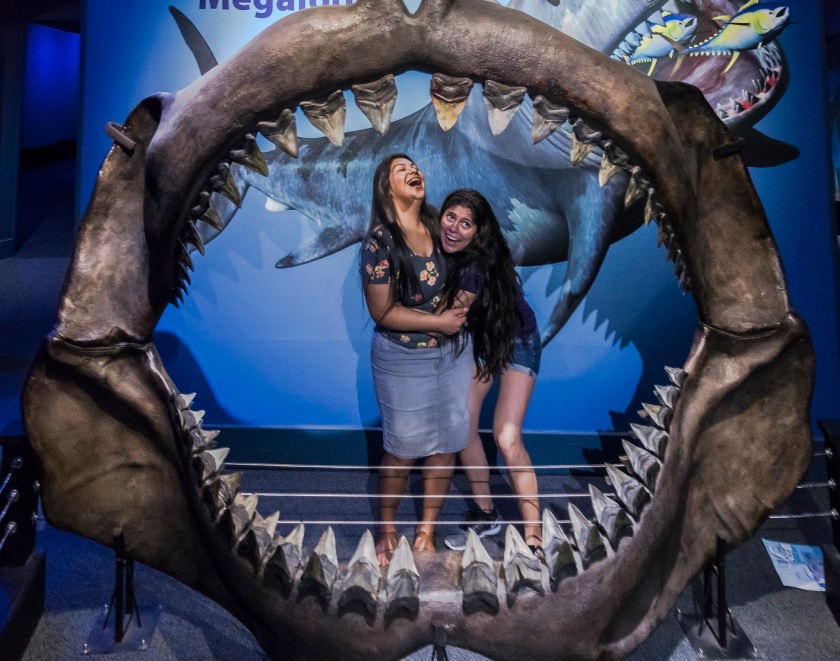 …before moving on to the Lion Fish and Electric Eels.  One of the highlights was seeing the Aquarium staff in full scuba gear feeding these fish.

The Museum’s exhibits are well configured, giving you the opportunity to see them up close.  The jellyfish exhibit, for example, is in low light, highlighting the animals translucent tissue. 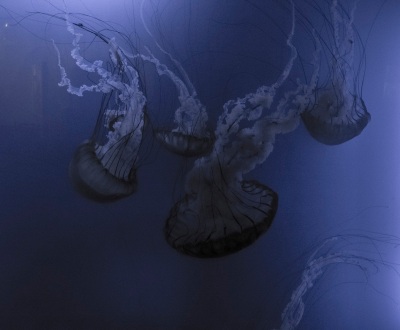 The sea otters, crocodile, and bald eagle were outside, and they were in separate exhibits, again configured in such a way as to maximize human interaction with the animals.  In the case of the sharks and stingrays, we could even put our arms in the water and “lightly touch the animals with two fingers.”

The true highlight of the aquarium are the dolphins.  The trainers brought out four dolphins, two of which were especially good at tricks.  Through mimicry, these dolphins learn to clap, jump out of the water, do flips, swim on their back, and even splash the audience!  Our favorite was a three-spin flip.

Next door to the Aquarium is the city’s Art Museum of South Texas.  The museum is housed in a structure designed by Philip Johnson and made from shellcrete. 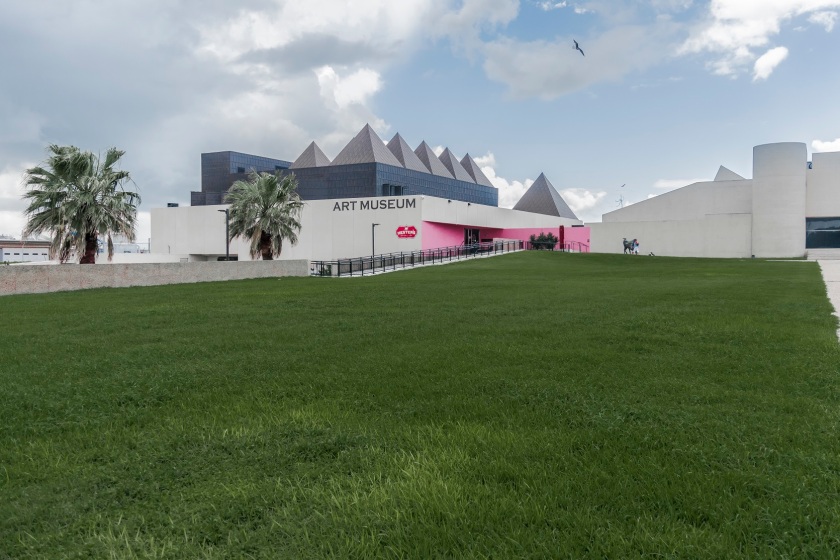 The current exhibit in the Museum was of Texas Mixed Media, and my favorite artist represented was Mary McCleary, who is actually a Professor of Art at Stephen F. Austin University.  In her artist statement, she indicates she takes found objects and layers them onto paper in a way that “conveys an intensity which the viewer finds compelling.”  That was the case for me (Alex), and I’d like to see more of her work.

We also had a chance to see another Dale Chihuly, and I learned about the “Art Guys,” who have a work composed of clear glass tubes horizontally placed on the wall and filled with broken glass.

Megan, too, found a new artist she liked: Bill Meek.  A glass artist from Houston, his piece “Catharsis” is in a sun room overlooking a piece by Jesus Moroles outside the building.

Speaking of which, the exterior of the Museum is as intriguing as the interior.  The walkway to the building includes a large, ringed fountain.

Off to the side is a large piece by James Surls, who graduated from Sam Houston State University. 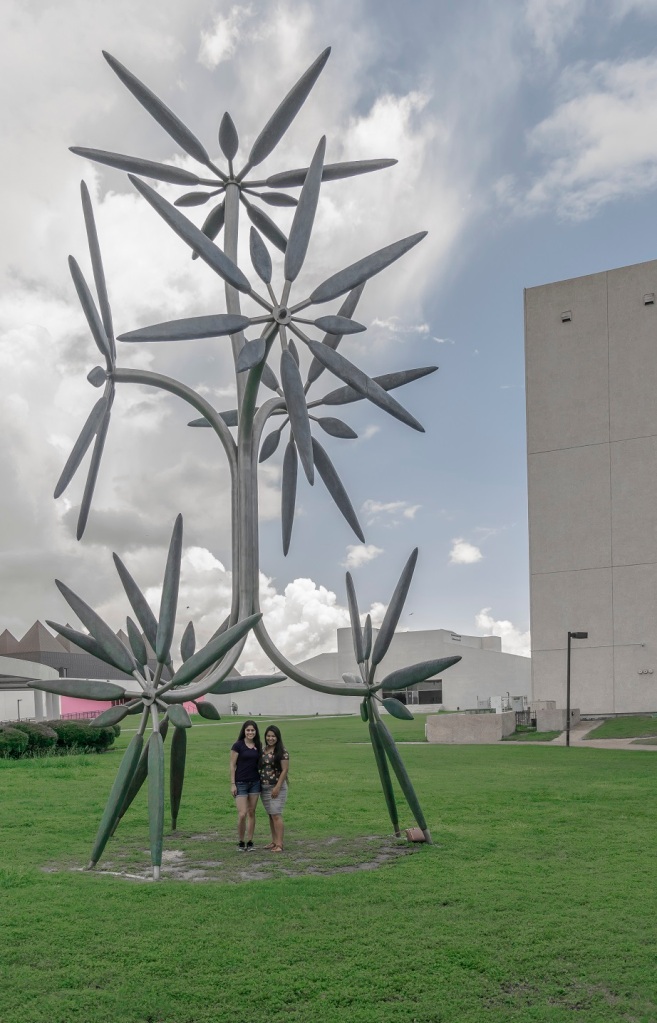 With all the art hitting close to home, we decided to stray outside the box for lunch.  Thus we went to a Vietnamese Restaurant (literally called “Vietnam Restaurant”) in Corpus Christi.  This seemed like an unlikely pairing, but the food was truly good.  I (Megan) ordered the Vietnam Fried Rice, which was delicious; Alex had the Vermicelli Noodles with grilled chicken; and Professor Yawn had the restaurant’s signature “Hot Pot” which, after being slow cooked for 25 minutes was, indeed, hot!  And very good.  It was our favorite restaurant thus far in the trip.

Before leaving Corpus, however, we felt somewhat compelled to visit “Mirador de la Flor,” which is a memorial to Selena, the Tejano singer.  Selena was shot at the age of 23 but she sold more than a million albums in her short career and paved the way for other Hispanic singers.

And with that visit, we closed down our time in Corpus Christi.  Although “hooked” by the beaches, baseball, sea-life, and art, we had business in the Rio Grande Valley, so southward we roamed.

But not before getting drinks at Coffee Wave.  We cannot recommend this enough!  The coffee was good; the Mexican Hot Chocolate was excellent, even on a summer day; and the Chai Tea Latte was amazing!  And with that, we waved goodbye to Corpus Christi!