With a busy day planned ahead of us, we began our morning with a light breakfast at Daily Offerings Coffee Roastery… 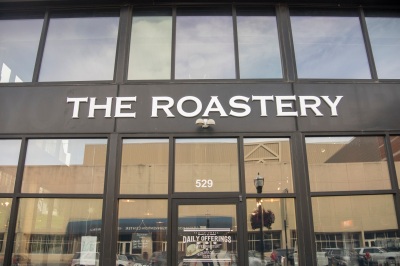 …a Southern hipster coffee shop offering several adventurous and traditional options. One of the more daring ambassadors tried the Lavender Honey Latte, and as Alex described it, “it felt like my mouth had just taken a bath.” 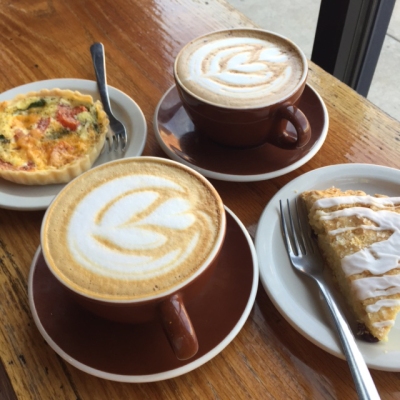 Others went for coconut or caramel lattes, and pastries to complement their drinks: coffee cakes, chocolate cookies, and blueberry scones. Once everyone had their fill, we departed for our first destination and activity of the day, a trip to Shaker Village in Pleasant Hill.

The Shakers fled England and first settled in New Lebanon, New York. In 1805, a group of 44 Shakers settled in Kentucky. Today there are no surviving Shakers in Kentucky and only a handful in Maine, but much of their settlement is still intact within the Pleasant Hill site. The historic farms of the village are maintained by the village’s employees, and crops and livestock are used at Pleasant Hill’s restaurant.

Our drive to Shaker Village through the Kentucky countryside was beautiful — a truly pleasant ride to start the day. Upon our arrival, we exchanged our charter bus for a school bus needed to maneuver a narrow, winding road to the Kentucky River a few miles away. There we boarded the Dixie Belle Riverboat for 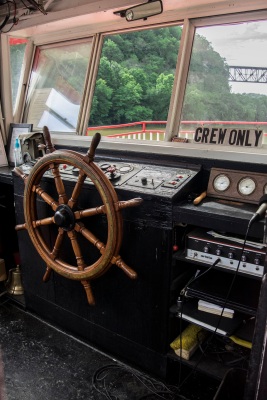 …a trip downriver through the Kentucky River Palisades, so named for the steep limestone cliffs and scenic outcroppings. 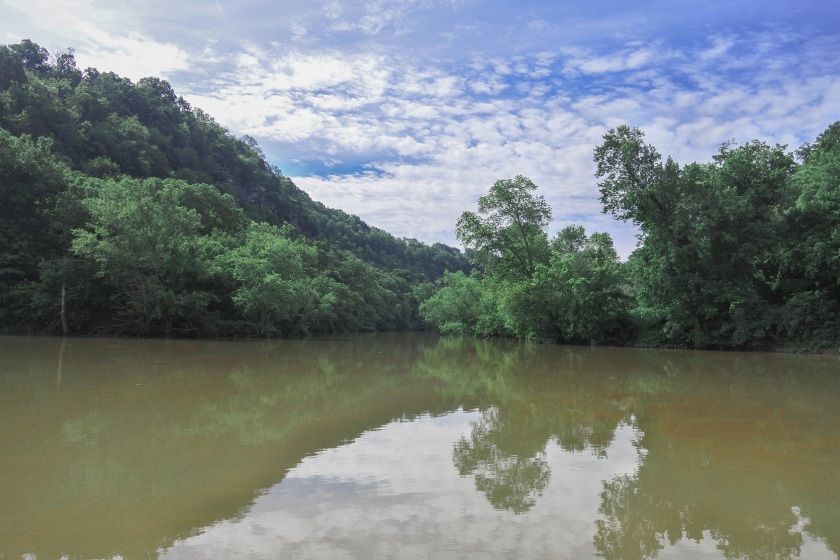 The Shakers used to travel the Kentucky River to New Orleans once or twice a year to trade goods they produced. At the time, this was a significant endeavor and few Shakers actually traveled on behalf of the community. The captain explained that the Kentucky River is 255 miles long and is normally a deep shade of green, but due to the recent rains, the water was a muddy brown (and over 14 feet deep).

We cruised alongside the limestone cliffs and the lush green trees that stood high above the riverbank, ever alert for signs of wildlife. The river is home to many types of turtles (including snapping turtles!) and snakes. Although we weren’t lucky enough to see any river critters, we enjoyed the scenic view and relaxing breeze before traveling back to the Village for the second half of the tour. 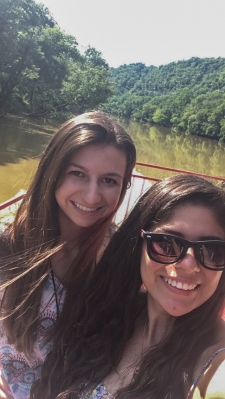 The Village tour began with a walk down one of the main streets, the guide noting the limestone buildings among green fields, and explaining to us that during the Shaker’s lifetime in the settlement very little of the land would be left vacant. Shakers did not believe in unusable land, so they worked every plot as efficiently as possible — whether to build family dwellings, grow crops, graze livestock, or build an ice house.

Shakers were a religious group who believed the way to enhance their worship of God was to live as simply as possible and as purely as Jesus Christ. They were not Luddites, though, and believed in using technological advances to help them live simple lives. In their attempts to be close to Christ, one of the sacrifices in joining the congregation was to become celibate. Men and woman stayed segregated among family dwellings, with one half of the buildings dedicated to men and the other half to women. Men and women also maintained an arm’s length distance away from each other and had their own staircase to travel among floors in their living quarters.

The Shakers also preached a need for equality. All Shakers were equal and none deserved more attention than another, a quite different viewpoint in 1805 when several types of groups did not have equal rights. The village’s ministry, the governing religious body for each community, was composed of both men and women from various communities appointed by the Shaker’s central ministry in New Lebanon. This helped remove community ministry leaders’ potential prejudices against other members of the village. The community was further regulated by segregating the leaders to their own living quarters and workshops, both of which we were able to tour. It was an interesting twist to community governing for the political science majors in the group.

Unlike traditional Christian services, Shakers did not believe in one designated leader preaching at all times. Although they did make use of the King James Bible, and participated in prayer, services were led by “whoever was moved by the Holy Spirit” on that particular day. Their religious ceremonies were not constrained by time, with the shortest service in Pleasant Hill recorded at only 15 minutes and the longest at 23 hours!

During worship the Shakers were known to sing songs, especially those who were “filled with the spirit,” and members were encouraged to record their songs (in writing) and share among members of the community and of other villages. Lyrics would come from a member’s need to express their devotion towards God, and reportedly sometimes by God himself, taking hold of a member’s body and using them as a vessel, as our tour guide described it.

Further, Shakers did not believe in using instruments nor in solo demonstrations; they believed that complex musical arrangements only took away from the song’s devotional message. From these lively worships (of which non-Shakers were invited to attend) the group was termed as the Shaking Quakers, for seldom had anyone seen such an enthusiastic mode of worship composed of dancing and singing. After a brief demonstration of a few “Shaker” songs, we were ready for our next Kentucky adventure.

We didn’t have to go far, though.  We met up with the other part of our group and walked the two short blocks from our hotel to the street party the SLC had planned for attendees and their families. We reached the 5/3 Pavilion at Cheapside Park and mingled with other guests. While we were there we ran into two new friends, Chris and Marisela Darminin.  We had previously met Chris during skeet shooting, and were excited to meet Marisela. They were both from Texas and glad to visit with fellow Texans at SLC, as were we! 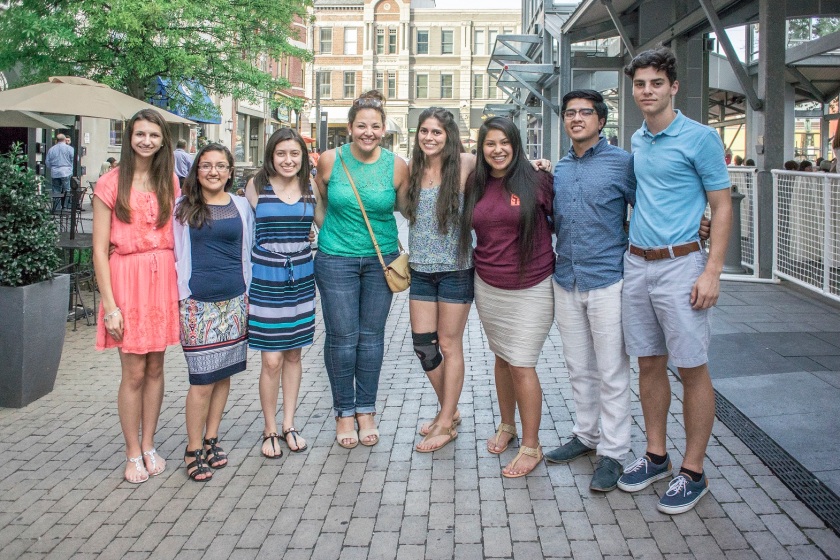 After speaking to them for a while and learning much about their careers and the great organizations that they support, we headed to our dinner destination, The Village Idiot.

Local Lexington icon The Village Idiot is in a building encompassing part of Lexington’s oldest post office building, dating back to 1825. We were all eager to try their fare since we had heard great things about the restaurant. Before our food arrived, we enjoyed bowls of fries and the cheese and sausage dip. Some of us had their famous (or maybe infamous?) “Idiot Burger,” a burger patty topped with an onion ring filled with pulled pork and topped off with a pretzel bun…it looked like quite the challenge! 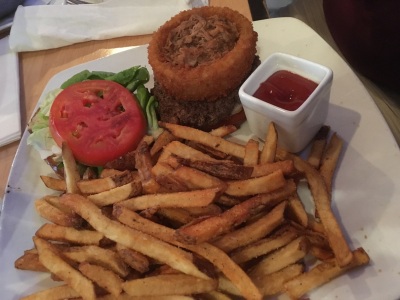 Others shared the duck & waffles (on those, Beatriz said, “The sweet taste of the waffles combined with the succulence of the duck was such a great combination that [she] was left drooling for more”); the Village Idiot Cheese Platter; and a Caprese Burger. With great gusto, we savored these delightful dishes, enjoying this picturesque place rich in food and history. We left satisfied that The Village Idiot had been the “smartest” choice for dinner.

After a filling dinner, we were all ready to enjoy another event, the “preview reception” for next year’s conference, as put on by that host state.  In this case, it was – and will be –Mississippi. As soon as we arrived, we were warmly greeted by numerous elected Senators and Representatives (and other representatives) from Mississippi who were handing out warm welcomes (and goodie bags) at the door.

We had arrived in time to hear an enthusiastic, well-written speech from the Speaker of the Mississippi House of Representatives, Philip Gunn, who captured our attention and left us wanting to visit Mississippi, the home to great names such as: Jerry Rice, Jerry Lee Lewis, and John Grisham. We even had the chance to chat for a few minutes with him and his wife (who is actually a Texan!)… 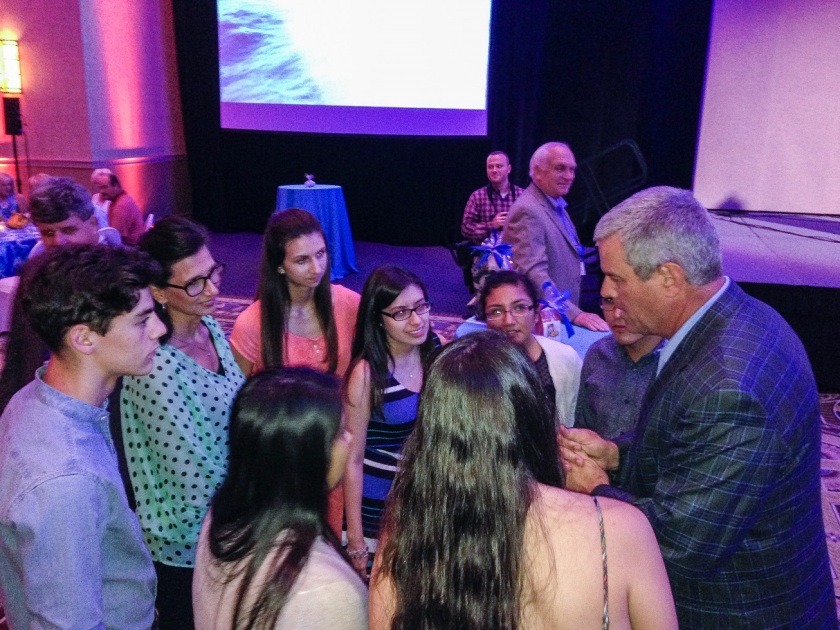 and get a quick pic. 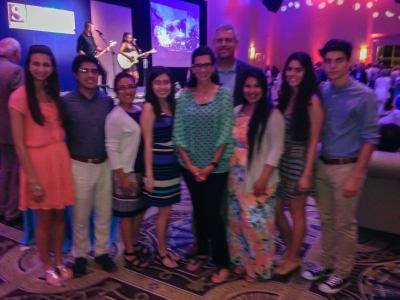 We also met up with an acquaintance from the night before, Ms. Leslie Hafner, who was the Senior Policy Advisor to the Governor of Tennessee.  She was very nice, and we were grateful to be able to get a photo with her before leaving the conference. 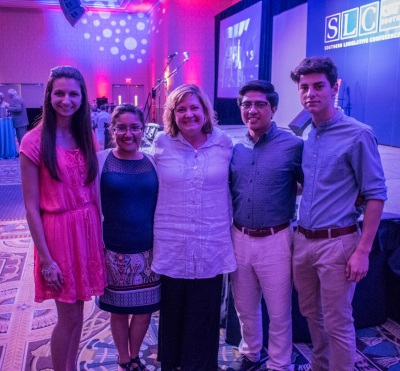 The evening’s entertainment, native-Mississippi jazz singer, Teneia Sanders-Eichelberger, as joined by her husband, Ben Eichelberger, was great to listen to while chatting with other guests. 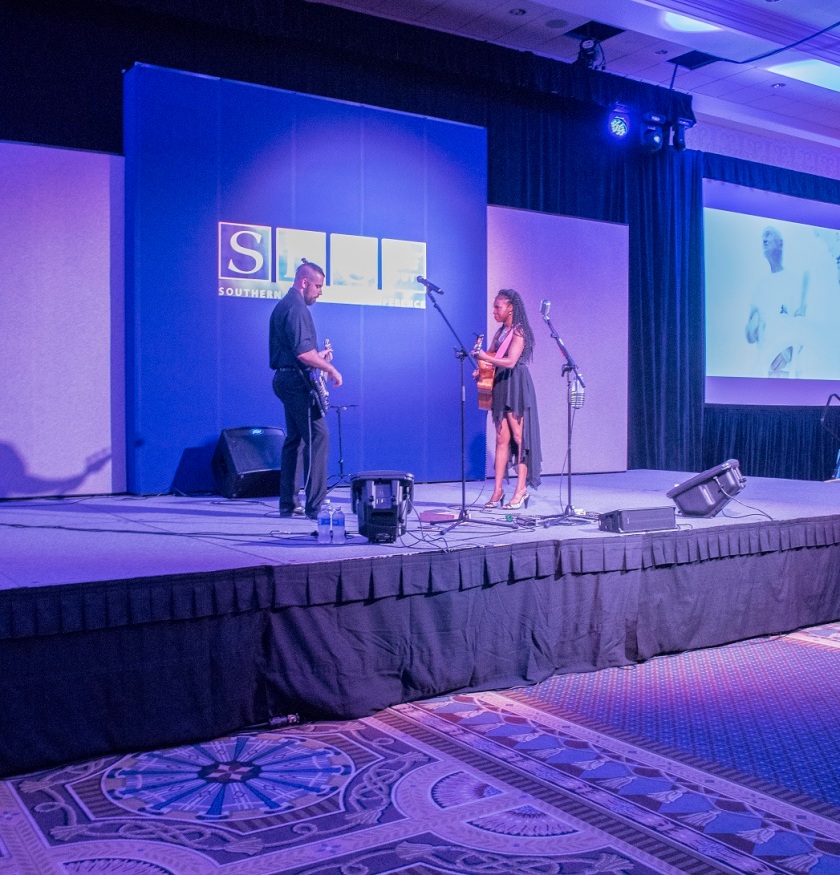 She had a unique blend of blues, soul, and southern music, and we were able to briefly meet them after their performance, as well. 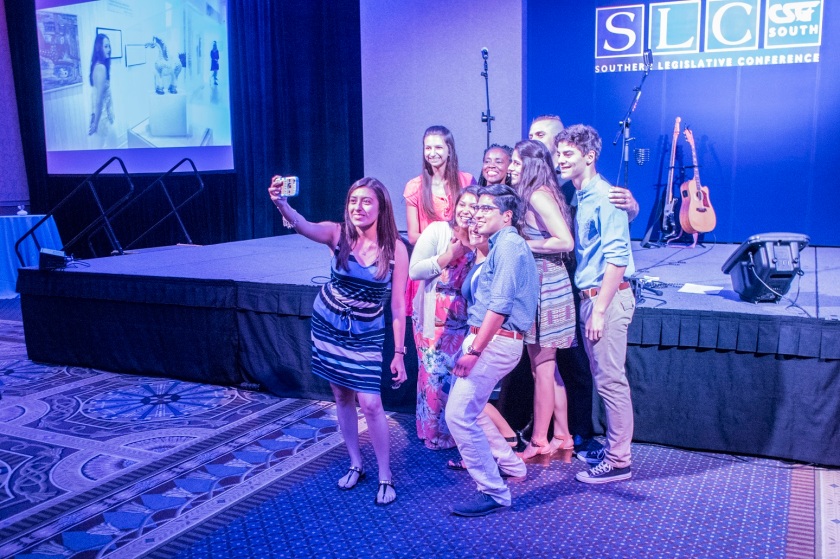 After an eventful night filled with great music and great people, we left to many cheers of “See you in Biloxi!” as we trudged off toward our hotel, anxious to reenergize for the next day’s activities.