Although our trip’s primary purpose is to assist Mr. Jeff Guinn with his research, our path to and from Detroit consists of various related (and otherwise educational) stops.  Today, the stops included the World War I Museum in Kansas City, the Capitol of Missouri in Jefferson City, and some historical sites in Springfield, IL.

With a towering concrete edifice, the World War I Monument was recognized as the national commemorative memorial of the war’s destructive toll.

Standing at the foot of the tower, we looked up to a blinding peak, which seemed to scratch the sun. With such an admiring sight, we found the elevator to climb the approximately ten-story structure. As we stepped onto the balcony of the memorial our sights were lost among the mesmerizing vista of Kansas City.

Perched on our elevated vantage point, we spotted various spouting fountains riddled amidst the city, appropriately nicknamed the City of Fountains.

After descending the 90-year old elevator–a very cozy metal enclosure hanging over rickety wires-we returned to the ground. We then rendezvoused outside the memorial and returned inside the museum, ready to view the exhibits of diverse aspects of the Great War.

With a brief overview of the complexity of the war’s inception, composed of treaties and alliances among the European nations, we began the tour with relics of the nations’ emperors and rulers.

Such antiquities included marksmanship trophies, luxurious smoking pipes and flasks, and  other royal artifacts. As we followed the museum’s exhibits we also viewed the different models of the combatant’s firearms with pistols and rifles from each of the European countries. This exhibit provided a sense of the period’s need for manufacturing, where each nation used its resources and laborers to mass produce their own firearms. Among the exhibits were showcased other aspects of the war which had not been experienced prior to the Great War, such as chemical warfare. With masks worn by these trench soldiers, grenades which contaminated the air with hazardous gas, and the spray of mustard gas which would burn the flesh of patriotic fighters, the atrocities witnessed in this war were unlike any other. Furthermore, the dugouts in which the military denizens took, what could loosely be termed, refuge, imposed a very deplorable, unsanitary, demoralizing lifestyle for the fighters of World War I. To further exhibit the effects of industrialization on war, there were also maquettes and life-size models of the war’s u-boats, primitive military air-crafts (some made out of cloth and wood!). and missiles. 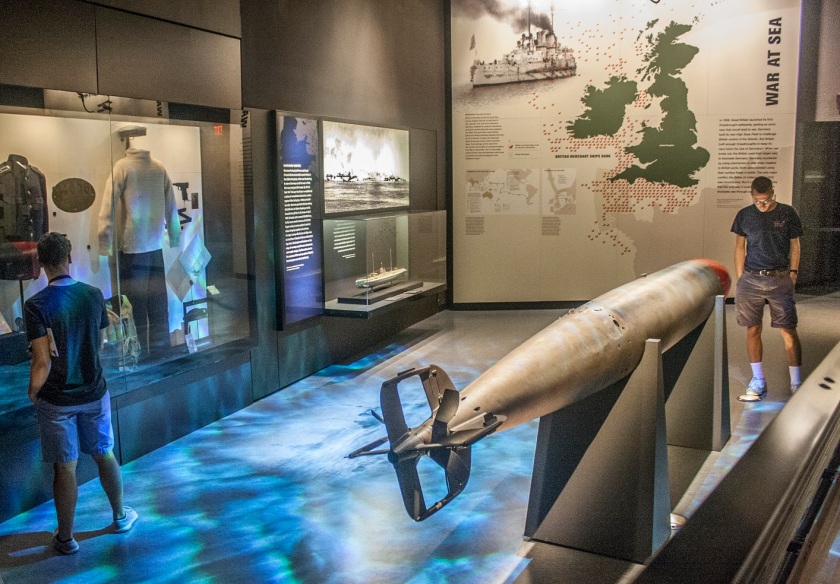 Most notably, in the American campaign section of the museum, we found two modified Ford Model T’s which would have been used during the war.

Even though the war acted as a catalyst for the modern industrial culture and economy, it also began a new age of catastrophic war. No other showcased artifact was able to capture this horror than Wilfred Owen’s “Dulce Et Decorum Est,” which we listened to inside one of the museum’s powerful exhibits. It was this poem that spoke the truth of the war’s atrocious effects on the lives of those who died and survived World War I. After this reflective visit to the museum, we went back to our traveling mini-van and got back on the road in order to reach Jefferson City on time for our tour of Missouri’s Capital Building.

After the two hour drive into Jefferson City, we hopped on an already-started capitol tour. Our tour began on the second floor, where there are sixteen murals done in a style called three point perspective, where, at different angles, objects in the painting seem to be altered. For example, in one mural depicting a civil war battle, Union forces look to be attacking, while Confederate forces are retreating, but, at another angle, the roles of the opposing sides seem to switch.

On this same level are the House and Senate chambers. On the house side, there is the House Lounge room, where Thomas Hart Benton, a native Missourian, painted a mural covering all of the walls.

The murals depict the history of Missouri, both good and bad, from French traders and farmers trading with the natives, to the time of Tom Pendergast, also known as “Boss Tom” (seen in the mural above on the bottom right).

When Boss Tom was arrested on tax fraud and sent to prison, one senator snuck in at night and carved Pendergast’s prison number on the back of his suit. Other congressmen would put out their cigars and cigarettes on his face, and Mr. Benton had to come back years later to repair the mural.

All the faces in the murals are native Missourians, except for one: an Osage Native American who was living on a reserve in Kansas, since natives were removed from their lands in Missouri.

Interestingly and sadly, when Mormons settled in Missouri, they were hated by many, and the governor passed an executive order in 1838 to allow anyone to drive them off of their land by any means necessary, whether that be tar and feathering, burning their house, or murder.

On the third floor is a hall of famous Missourians, where busts of well-known natives of the state are featured. Two in particular—Emmet Kelley, a famous clown, and Stan Musial, a famous baseball player—are special in that, if you take a picture of them with the flash on, you see features not visible to the naked eye.  With Kelley, for example, you can see his clown makeup when photographed with a flash. 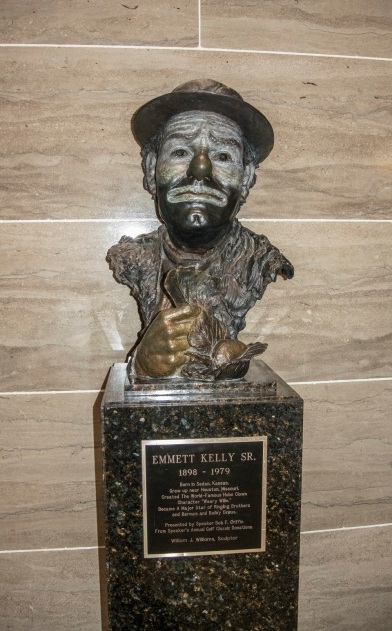 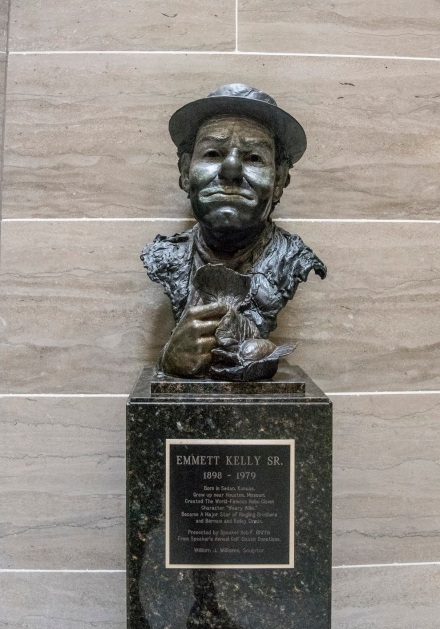 When Stan Musial is photographed with flash, the red “SL” on his cap is visible; without the flash, or by the naked eye, the SL is visible, but not in Cardinal red. 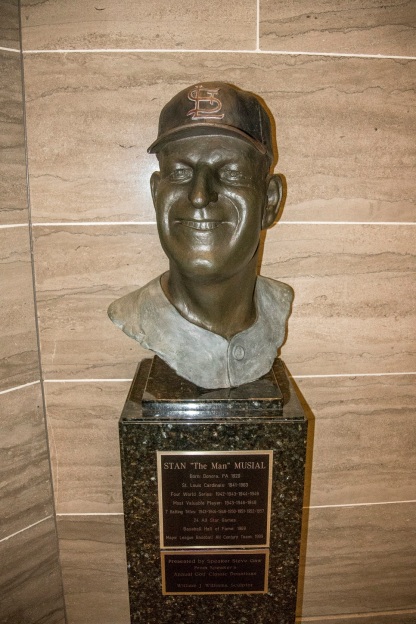 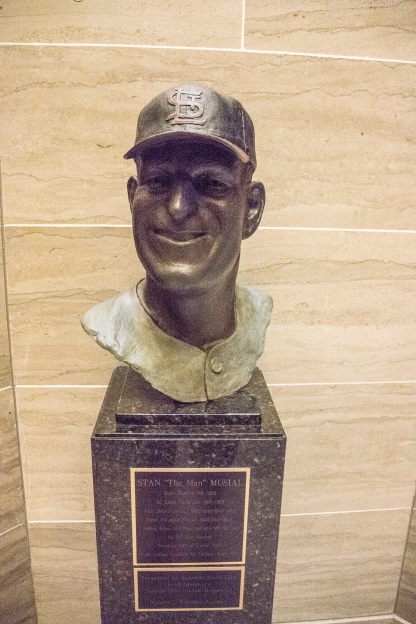 Also on this floor is the grand staircase, a huge staircase which leads from the grounds outside to the third floor, the largest bronze doors cast since the Roman Empire, and a 9,000 pound bronze chandelier suspended from the ceiling of the dome. Having finished the tour of one of the “most interactive capital buildings” (according to Brian Aldaco), our hunger was calling our attention.

For lunch we went to a place called Arris, right next to the beautiful Missouri Capitol. Arris is a Greek pizzeria. Every pizza that they serve is named after a different figure from Greek mythology or history, including Achilles, Athena, Atlas, Poseidon, and Plato. Curiously, it seems that the philosopher has determined that eating animals is unjust, as the Plato was a vegetarian pizza.  We went for a meat option. 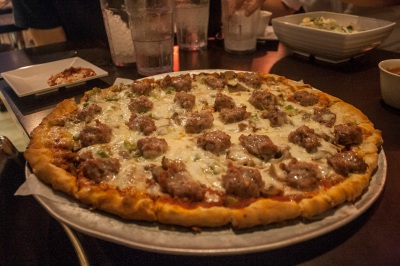 Between the LEAPsters we split the Aiyaiys pizza, made up of cheese, mushroom, green peppers, and sausage. Professor Yawn got a gyro sandwich of Illiadic proportions in lieu of pizza. We also discovered that Greek pizza bears more resemblance to Italian pizza than American pizza. “Like the Italian pizza, this one had less tomato sauce, and a thinner crust,” commented Paul Oliver. Having tasted among the finest in Greek pie we drove towards Springfield, Illinois in hopes that we would make there on time before the closing of Lincoln’s burial grounds.

After another long car ride we arrived at Lincoln’s Tomb. It is an impressive edifice, boasting a central obelisk that rises to a point high above the rest of the mausoleum. 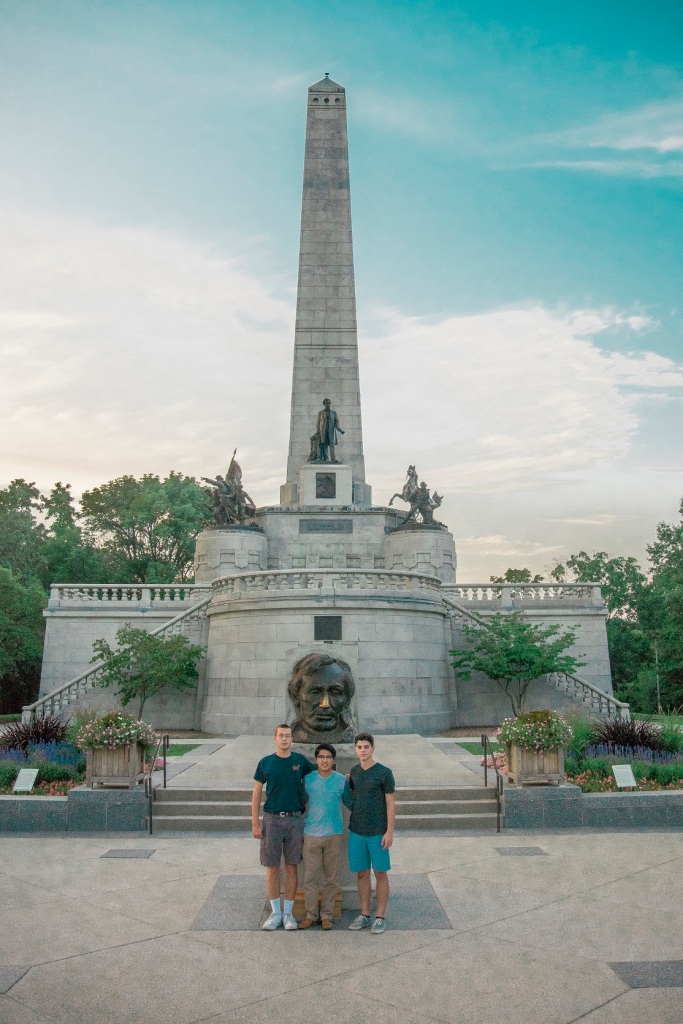 A statue of Lincoln adorns the front, his hand outstretched before him. Beneath him various statues of heroes stand. At the base of the tomb is a heavy, metal door that allows entrance into his sepulcher.

The rest of the necropolis was quite beautiful as well. The landscape of lush, green grass and tall trees provided a verdant resting place for the dead. Most curiously, adjacent to Lincoln’s tomb was the old home for the tomb’s caretaker. Due to an edict issued by the governor at the time of the crypt’s construction, all government buildings had to be made in a gothic style. The caretaker’s home is therefore made of stone bricks, and has a presumably faux-watchtower built into its side, as well as battlements upon the roof.

As the tower’s bell knoll marked the time for the cemetery to close, we rode to take a peak of Illinois’ Capital Building. On its grounds stood a statue of Abraham Lincoln…

….and Stephen Douglas which we were fond of (he appeared to be strutting). After admiring the very dramatic architecture… 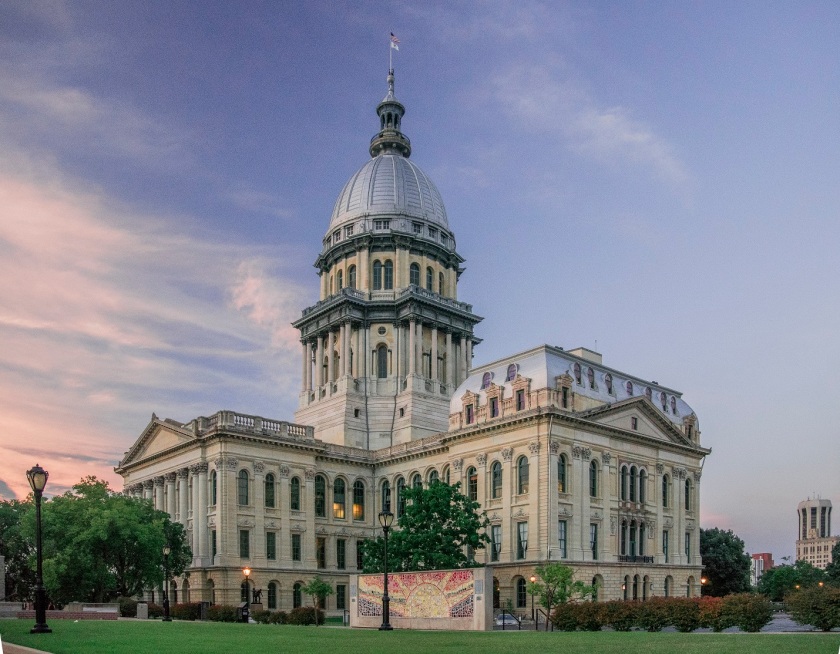 …we rode a few blocks in search of Frank Lloyd Wright’s Dana-Thomas home.

Unlike the Usonian homes we had visited in our previous trip, the Dana-Thomas home was designed in a more oriental-inspired design but it still stood as a home far ahead of its time. Even though it was built a hundred years ago, due to its very modern appearance, it could have very well been built yesterday.

To continue on our search for interesting homes, we also went in search for Lincoln’s Springfield home. Situated along South 8th St. and East Jackson St., the homes that surround the former Illinois senator’s residence are preserved as they were in the 19th century. With the street left unpaved, walking towards Lincoln’s home was an enjoyable stroll down a period of American history that is left frozen in time in those few blocks near The Great Emancipator’s home. As we caught the last glimpses of the residence, with the sun already beneath the horizon and fireflies glittering along the dirt road, we hoped onto our minivan ready to make our three-hour ride to Chicago. With a very satisfying day of historical learning coupled with an estimated total travel time of eleven hours we deemed it appropriate to pat ourselves on the back for having enjoyably finished the second day of our trip.