On our Sunday Chicago adventure, the LEAP Ambassadors continued on the path of artistic enlightenment by visiting the Chicago Institute of Art and Frank Lloyd Wright’s Robie Home. This as part of our Vagabond Research Trip which would lead us our first meeting with New York Times bestseller author Jeff Guinn, which we would soon meet with in Dearborn, Michigan. However, to shake off our morning drowsiness we climbed up Willis Tower to hover over Chicago in the skyscraper’s Skydeck.

Upon entrance of the tower, with grounded pillars exposed so as to view the building’s essential elements to its prominent stature, we  joined the crowed who anxiously await the hundred-and-three-story ascent to the glass viewing enclosure. Huddled inside the elevator we arrived at our floor of destination after a minute long ride (the same climb which takes ninety seconds to complete during windy weather). At the top of the 1,730 ft building, a size comparable to 283 vertical Barack Obamas, the view of the Windy City was breathtaking.

Whether this was caused by the vista from the clouds or the vertigo of being on their level, our hearts were firmly set on forcing our bodies to step over the ledge onto the clear-glass viewing deck. Suspended over the city, with feet seemingly floating over the ground, sweaty palms, and throbbing heads nervous about the deck’s ability to keep us safely enclosed…

…Professor Yawn wisely suggested that we create a photo-op by jumping upon the skydeck.  This turned out to be more fun than dangerous, but ultimately futile as a photo-op because the skydeck photographers couldn’t time the photos correctly.

Art Institute of Chicago, by Brian Aldaco and Paul Oliver

Having experienced our elevated adventure, our next stop was the Art Institute of Chicago; a sprawling, labyrinthine art museum that contained art from a myraid of different cultures and ages.

We had the opportunity to see several famous pieces, such as Grant Wood’s American Gothic…

Seurat’s A Sunday on La Grande Jatte, and of course, Edward Hopper’s Nighthawks.

After viewing Nighthawks together… 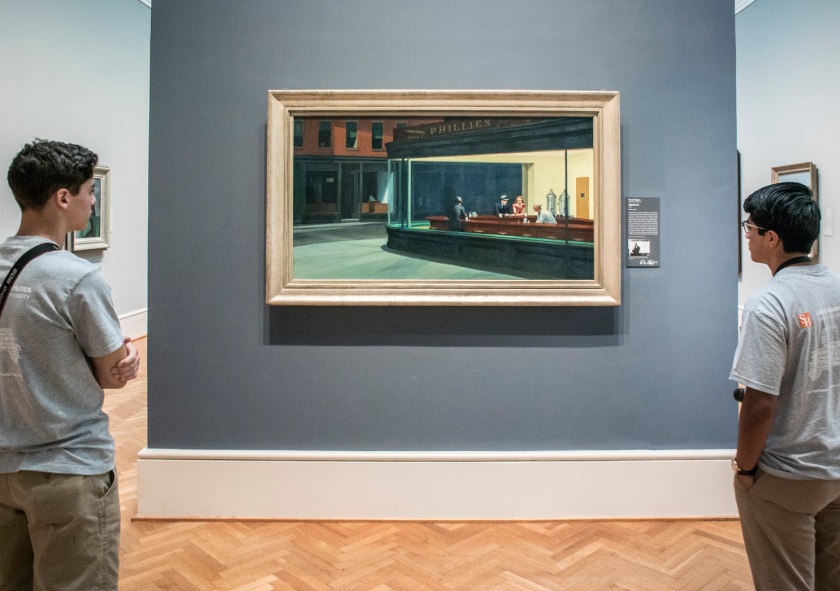 …we went our separate ways. Paul traveled back in time to Ancient Greece and Rome, looking at the Roman statuary, Greek pottery, and Byzantine pieces on display. Of special note in this section was a Roman reproduction of the Aphrodite of Knidos. The original Aphrodite was a Greek statue, and it was contentious in its time, for it was the first instance of a goddess being depicted in the nude. Also of interest were the Greek amphoras, kylixes, and other pottery pieces. The amphora is a larger container that presents a larger space for the artist, whereas the kylix is a smaller, but broad object, that was used as a wine goblet. The amount of wine that could be held by a kylix looks substantial, but the Greeks believed it to be a mark of the barbarian to drink wine unmixed. Therefore, they would add water to it, which perhaps justifies the size of the kylixes. The pottery itself takes two styles generally; black figure and red figure. The color refers to what hue the people depicted are, so on a black figure amphora, the heroes or gods represented are black, and the background is red. The reverse is true for a red figure work. Paul also went to see the Medieval Arms & Armor section, but unfortunately it was not open yet!

Simultaneously on the Modern Wing of the museum, Professor Yawn, Brian Aldaco, and Ryan Brim viewed multiple works from artists of diverse periods in art history. The turn of 20th century was captured by works of artists such as Mary Cassatt, John Singer Sargent, and James Whistler, the latter of whom helped usher in impressionism in the United States.

In further floors we also viewed works from Great Depression artists such as Grant Wood, Thomas Hart Benton and Edward Hopper whose desire to capture everyday rural and urban American life was astonishing. We also attempted to study the abstractions and surrealism behind the works of Salvador Dalí, Rene Magritte, and Pablo Picasso.

To further strain our left analytic hemisphere, we viewed the works of conceptual artists such as Andy Warhol, Mark Rothko, Jackson Pollock and other contemporary artists.

Having completed our journey through a century’s worth of art, we joined the pedestrian throng towards Millennium Park. As we passed Jaume Plensa’s Crowne Fountain, where happy children frolicked under the spewing gush of water (which shot from the mouths of the fountain’s face-depicting pillars); its refreshing spray was welcoming against the city’s heat. Going along the park we found its signature Cloud Gate sculpture, most commonly known as “The Bean.” With its mirror image of the surrounding skyline which warped as the rounded angles revolved around the sculpture, we neared it’s metal surface and seemingly became part of the picturesque vista. Soon after taking a couple of pictures of us LEAPing by the sculpture…

…we ordered a Chicago-style hotdog at a nearby stand. Thus, we lunched in true Chicago style over the city’s patrimonial treasure.

After some the authentic Chicago-style hot dogs in Millennium Park, we headed over to the campus of the University of Chicago, where we toured the Robie House, built by architect Frank Lloyd Wright in 1909. Like many of his other homes, Wright built the prairie style house by accentuating long horizontal lines to draw one’s eye across the house.

Before we entered the front door, we were met with a low ceiling that was similar in height and in material to the one just inside the greeting area. This created a sort of transition space that allows a guest to have a seamless transition between the outside and inside. Once we went up the stairs to the main living area and dining area, the ceiling became taller, and the room brighter. This is another one of his techniques called “compress and release,” forcing people out of the dimly-lit greeting area and into the bright living space. Although there are no doors separating the dining and living areas, there is a fireplace that breaks up the two spaces.

Mr. Wright believed that there should be as few enclosed rooms in a house as possible, so he made an opening at the top of the fireplace so that someone in one room could see the continuing ceiling across the whole floor. He did this by diverting the smoke into two separate chimneys, leaving the middle open from obstruction. There were also many windows and French doors all along the room connecting the exterior with the interior and making the room seem much bigger. In the dining area, there would have been a dining table with pillars as legs extending above its surface on which one could set lights. Similarly the table was fashioned with high backed chairs, so when people would eat dinner together there they would have sufficient lighting and the high chairs made the table seem to be a space within a space. On the third level were the bedrooms and bathrooms, each with natural lighting from many windows. The servants quarters and kitchen were on the second level, keeping them level with the rest of the family for according to Wright’s philosophy everyone was of equal worth. Just above the servant’s quarters was the car garage where the gift shop is today.

After leaving the beautiful home, we made our way through Illinois and Indiana to finally reach Michigan. Somewhere along the state in need of a place to switch drivers and stretch our legs, we stopped at Coloma, Michigan, to go to the Chocolate Garden. The small business which specializes in chocolate truffles, according to one of the ladies working there, was started in 1998 as an online business. The eventual physical location was built in an old barn, but quickly expanded. Notably, the Chocolate Garden has been featured on the Food Network, which helped propel it to fame.

In addition to the Chocolate Garden’s wide assortment in chlorate truffles, it also has a “tasting bar.”

It is here where for a small fee it is possible to taste up to three different types of these truffles of chocolatey delight. Professor Yawn lamented that the LEAP ladies were not along on this trip, as they surely would have enjoyed this stop. With this in mind, we joyously sampled the rich, delectable chocolate truffles. The “Darkest Dark” truffle and the “Vanilla Rose” were both exceptionally scrumptious. It was truly a must-stop for any chocolate aficionado and a tragedy that the ladies were not with us.

As we left, Professor Yawn, in a seemingly magnanimous gesture, proffered us a truffle he had purchased. Brian and Paul both took the sample from him and enjoyed the chocolate taste for a brief second.  As it turned out, though, the truffle was a “Cayenne Kick,” which packed a nasty spice that only becomes apparent after a few seconds. Needless to say, Professor Yawn got a kick out of our reactions.

After our sweet treat we continued on our trip where we eventually entered Dearborn ready to soothe our growling stomachs at Rex’s Golden Grill. With a diner menu of fish and chips and burgers, we were very much satisfied with the evening’s repast. It was so that we finished our Sunday evening in Dearborn, ready to start our first day of Vagabond research early in the morning.