The LEAP Ambassadors are on the road again as we return from Dearborn, Michigan. Even though we left yesterday, our trip back to Huntsville is, in LEAP style, exploiting the learning opportunities along the way. Driving through the Midwest, we have been enjoying fields of green, skies of blue and white ornamented with sunny streaks, while visiting locations of historic prominence. From the birthplace of one of the fathers of the modern age to the resting place of our nation’s 29th president, we knew that our Friday itinerary would be as fun as any of the previous adventures in our Vagabond trip.

Speaking of the Vagabonds, our first historic site of the day was the birthplace of Thomas Alva Edison in Milan, Ohio.

Constructed along the banks of the Milan Canal in 1839, this modest home was where young Edison spent his childhood until he was  seven-years old. Even though the family left in 1854 due to the town’s low job opportunities, the home would be owned again by the original family when Marion (older sister of Thomas) bought the home. Eventually the home was bought by Tomas Edison and efforts from his wife and sister were later made to turn the home into a historic site. These finally came to fruition in 1947 when the home was inaugurated as a museum on 100th anniversary of Edison’s birth. 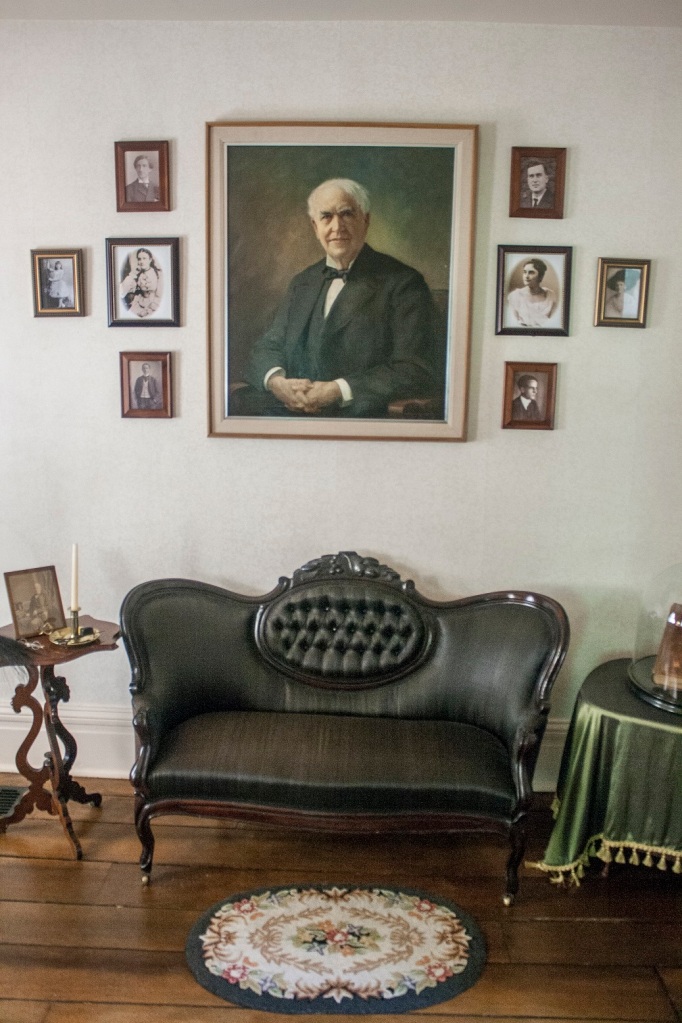 Upon arrival to the restored home along Edison Avenue, seemingly as common as the neighboring homes, we stepped into the birthplace of one of the most important inventors of all time. On the living room stood a cradling bench, one that would have been used to cradle young Edison. What was of greater interest was the adjacent room. In a small, four-walled enclosure, intended for the younger children’s living quarters, stood a complimentary rope bed. Mother Nancy Edison moved to the warmer, oven-heated space on which she gave birth to her youngest child. We stood on the threshold of where Thomas Edison had been born on a February evening in 1847. As we stepped upstairs we were able to sense young Edison’s childhood.

The first bedroom we went into would have been young Marion’s room, now decorated with her christening gown and a knitted tapestry on the wall which she chose not to finish. We then crossed to the opposite room which Thomas and wife Mina Millar used as a bedroom after purchasing the home. Various pieces of apparel owned by the Wizard of Menlo Park were exhibited in the closets. One garment which we found amusing was a pair of slippers, the preferred footwear for the insomniac inventor who would often nap on the strategically placed cots located around his laboratory in Orange, New Jersey.

As we walked downstairs into the parlor room we spotted a portrait which depicted Edison on a fireside’s edge telling a story to a group of children and friends, on of which we recognized as a very attentive man with the name of Henry Ford. As we had spent a week researching the pairs’ 1915-1926 trips across the nation, it was exciting to view signs of their great friendship. We were further amazed, however, by the small space behind the parlor room. On this small storage room stood dozens of artifacts that the inventor had patented during his lifetime. As T. Edison held a list of over 1000 patents, it was rewarding to view artifacts such as the electric pen and the talking doll (the first toy of its kind in the US.) Other items included one of his first successful lightbulbs of bamboo filament (the lightbulb still works), a Western Union telegraph machine which he sold for $40,000 after its creation, and Edison spark plugs, which further helped solidify his connection with Ford.

With our tour ending at the home’s basement, in which artifacts from the period such as a pole latter and a waffle maker were shown to us, we took our last glimpse of the home and started on our way towards Marion, Ohio.

Before reaching the home town of William G. Harding, however, our homesickness was too strong. Along the road, we came across Tackett’s Southern Bar-B-Que. After overlooking the menu, Paul ordered a brisket sandwich, Professor Yawn chose a plate of pork, and Brian ordered a meal of St. Louis ribs, a bit incongruous considering the venue’s advertised title. Regardless of the cut’s name, the ribs of mouthwatering delight, along with the other meats, were savory to our southern palates. Accompanied with a side of coleslaw and beans (which were bathed in barbecue with a trace of meat) our lunch was more than enough to satisfy our appetite for Texas cuisine.

After lunch we headed to the Warren G. Harding home. Harding was President of the United States after Woodrow Wilson. This meant the he had to oversee the period immediately following the First World War. Importantly, for the purposes of our trip, Harding was also a Vagabond camper, having joined Henry Ford, Thomas Edison, and Harvey Firestone on their 1921 trip.

Unfortunately for us, we were running short on time, therefore, could no take the tour of the home, only visit some of its exhibits, tour the grounds, and look over the gift shop.

However, we did manage to head down the street to the Tomb of the both President Harding and the First Lady.

The tomb is a beautiful structure. Circular columns form the exterior. These columns themselves stand upon a massive base of what appeared to be white marble or polished granite. Inside the pillar arrangement was a walkway, shaded by an overhang above. This overhang was in turn supported by an interior range of columns, of the slight ornate iconic order. In the center of the tomb was a circle of green grass, bushes, and a tall tree whose branches seemed to reach upwards towards the sun, with roots streaming down on to two large grey sarcophagi. 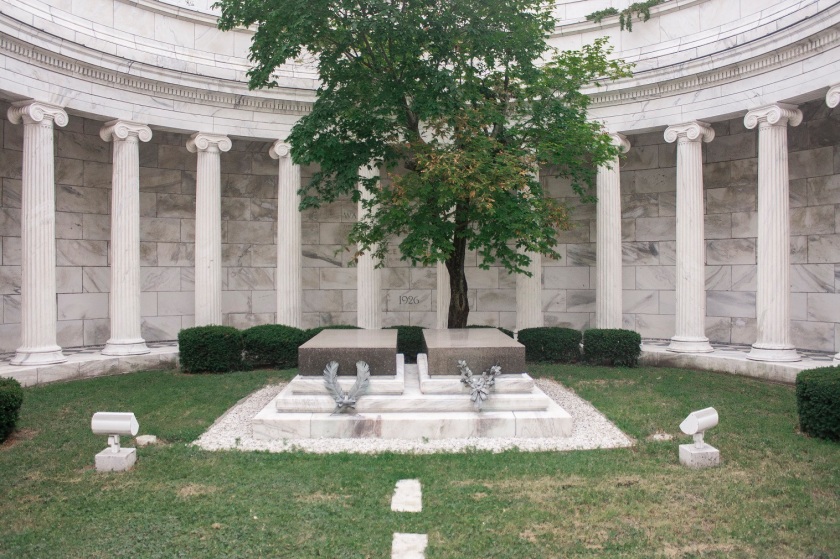 Behind the twin stone coffins of Mr. and Mrs. Harding was an inscription carved into the back wall which contained their names and dates of death. It was an impressive monument to a President from a bygone era. 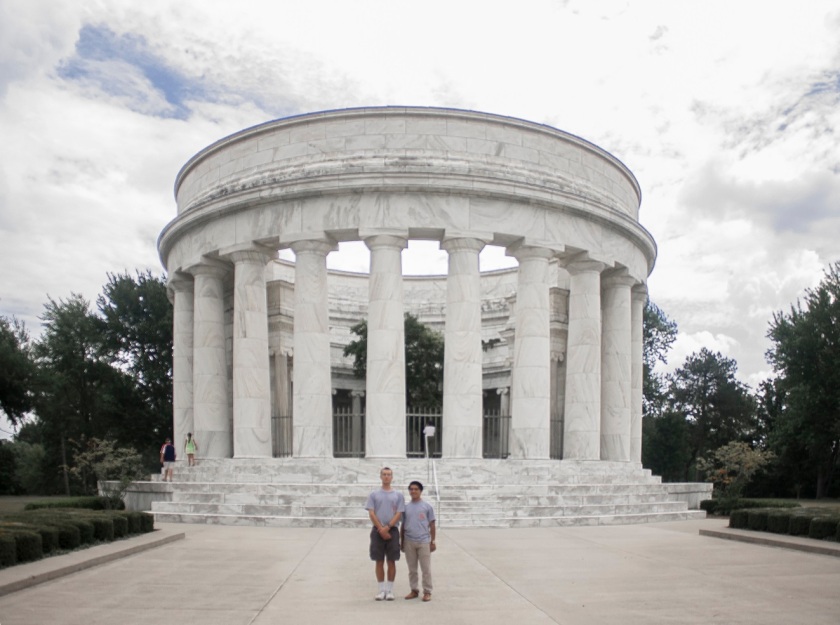 After touring the monument, the three of us jumped back into the van, and set off towards Columbus to tour the capitol of Ohio. We arrived just in time to join the tour, and were treated to an hour-long walk through of the grand statehouse.  Interestingly, unlike most capitals, the Ohio capitols is not domed, at least not from the exterior.

Rather, it was built with a towering cupola perched atop its roof. The interior of the capitol, however, offered a view from the rotunda of what appeared, from the interior, to be a dome.

The capitol was built earlier than most capitols (construction began in 1838), so it was somewhat less grand than many others (say, the Texas Capitol).  But it offered interesting exhibits and interactive features…

…as well as some interesting interior art.

Interestingly, for a state that produced eight presidents, the large portraits on their walls were dedicated not to these presidents but to Thomas Edison on one side…

…and the Wright Brothers on the other side.

Aside from the art, we were able to visit both the House…

Although not a spectacular capitol, it was a stop well worth our time, and we enjoyed the tour very much.

As we finished our capitol tour to step outside and view a little of Columbus architecture, we  continued on our 160-mile journey towards Indianapolis, Indiana. We arrived at the city accordingly for we were already getting hungry. Therefore, we stopped for dinner at a deli which served exceptionally good subs. Paul enjoyed a 12” Italian sandwich, while Brian and Professor Yawn shared an Italian and a Reuben sandwich between them. After a cookie desert, tired from a long trip and days’ adventure, we retired to our hotel.  We contemplated how tomorrow we would have a long day of sight-seeing and total of 7-hours of driving. But with the proper LEAP attitude, we greet tomorrow and days to come, anticipating the best of adventures.