As we wend our way home from “The Motor City,” we stopped in Indianapolis to see a heap of historic sites, from extensions of our research on The Vagabonds, to the Indy 500, to a presidential home, a capitol, and a fine art museum.  Although it was our second-to-last day on the road, it promised to be a full one.

We have friends who have been to the races here, and they indicate it’s pretty incredible.  The Museum, however, is not incredible.  It’s actually quite boring.

The Museum itself consists of approximately three rooms: a large show-case style room, a smaller room beyond the main room, and a room to the left which houses “special exhibits.”  The main room has a timeline, which consists of a series of photographs on the walls, and then the winning cars from the past 100 years of races.

Although it is of some interest to see the evolution of cars from long ago to today (mostly, the long-ago cars were cooler), there wasn’t a whole lot of context or the interesting tidbits you can learn from even small museums.

After looking around and wondering, “Is this all there is?”, we opted for the “short video” that provided “background.”  It was short–about 8 minutes–but it provided almost no background.  It was an eight-minute commercial for the special “spirit” of the Indianapolis 500.  It provided little or no substantive information about the origin of the race, why Indianapolis became home to racing, or how things have changed over the years.  It, too, was a disappointment. 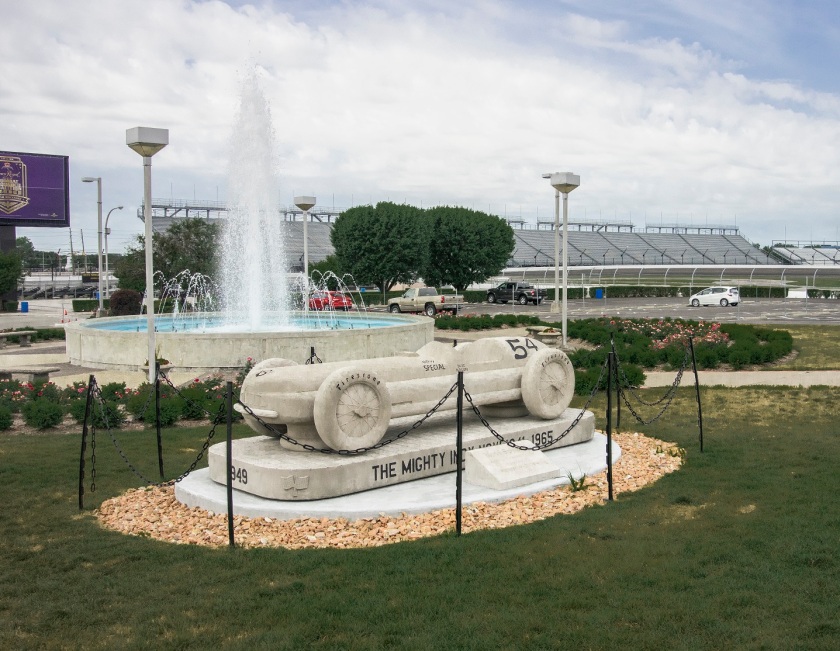 Undaunted by the Speedway disappointment, we sped out of there and had breakfast at the City Cafe in downtown Indianapolis before heading to the Indiana State Capitol building.

…but we were truly struck by the interior.

Interestingly, it houses all three branches of government; executive, legislative, and judicial. Thus we were able to see the working Governor’s office…

…the House and Senate chambers, and the court room of the Indiana Supreme Court, which doesn’t resemble a lot of the past statehouse tours.

The interior of the Indiana Capitol is made of smooth, polished Vermont marble and Indiana limestone. The architecture is evocative of the Italian style. The rotunda at the heart of the building boasts an impressive stained-glass ceiling, and two wings that extend outwards in each direction. 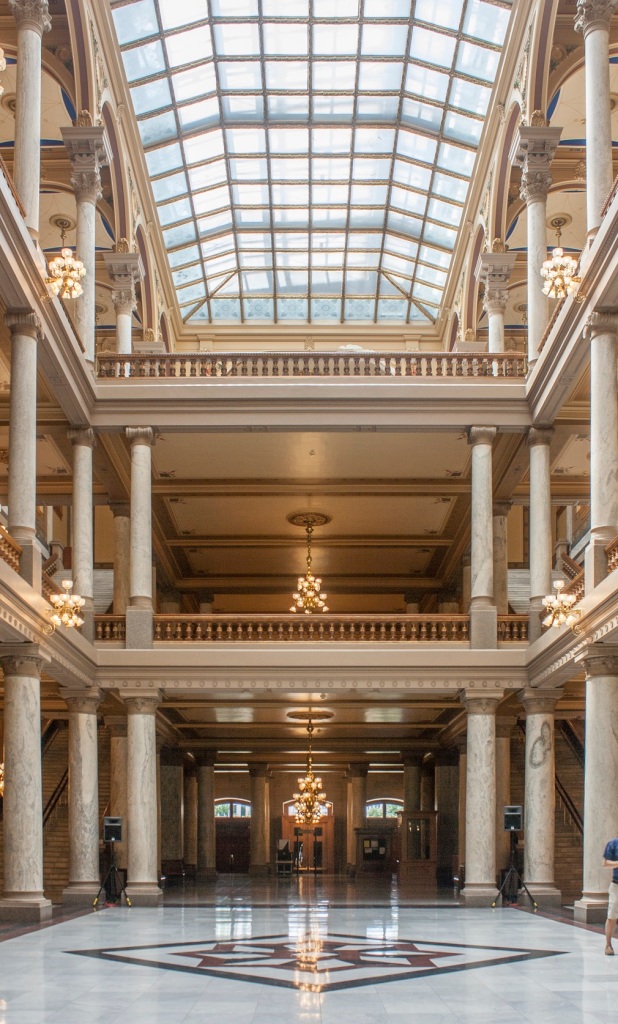 The wings mirror each other, and have large open areas that go four floors upward before terminating in a glass ceiling that lets natural light filter down to the floor. Each open space is surrounded by walkways set into the walls and supported by columns in a colonnade fashion. Of special note was the fact that all three of the classical Greek styles of columns were represented. The first floor showcased doric columns; the second floor was supported by imposing, almost un-ornamented ionic columns; and the third floor was held up by thinner, more artistic corinthian columns. All of the columns were made of grey-white marble, and lacked fluting (vertical lines running up and down the length of the column).

Our tour guide led us through this pleasant architectural feat, showing off various interesting busts of famous Hoosiers.

He also made sure to impress upon us some pertinent facts about Indiana. We learned that the state bird is the cardinal, the state flower is the peony, the state tree is the tulip poplar, and the state song is “On the Banks of the Wabash, Far Away.” Most importantly, he told us that Indiana is one of only four states with an official state pie, which for Indiana is the sugar-cream pie.  It was a nice tour, with a very nice tour guide.

And although we missed seeing Governor Pence at the Capitol, we did see people protesting Pence.

But before heading to our next historic home, we decided to go to the Indiana Soldiers’ and Sailors’ memorial.

This edifice boasts a pool and fountain beneath a circular, raised dais decorated by various sculptures. Soaring above it all is a tower that rears upwards toward the clouds. 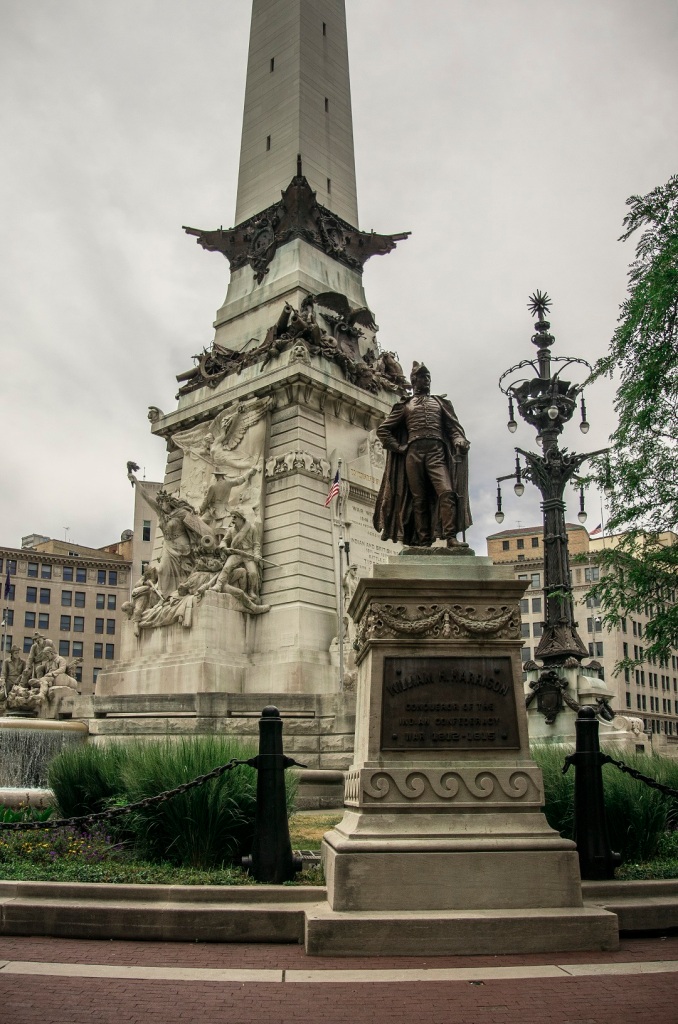 You can actually climb up a set of 330 stairs on the inside of the obelisk, or take an elevator to the top for a small fee. Prof. Yawn elected to pay, while Brian and Paul adventurously took the stairs all the way to the top, compelled to do so after all of the vertigo-filled adventures of the trip. It was a beautiful view from up above, making the climb up worth it.

Our feat of athleticism was soon rewarded by a short visit to the Chocolate Cafe right across the street from the memorial. While sipping on a very sweet, creamy Chocolate Chai and nibbling on a very rich caramel sea salt chocolate, we people-watched.  This was made more interesting by the gathering of people in our midst.  There was, for example, a convention of sorts for Mennonites, who sang on a town square… 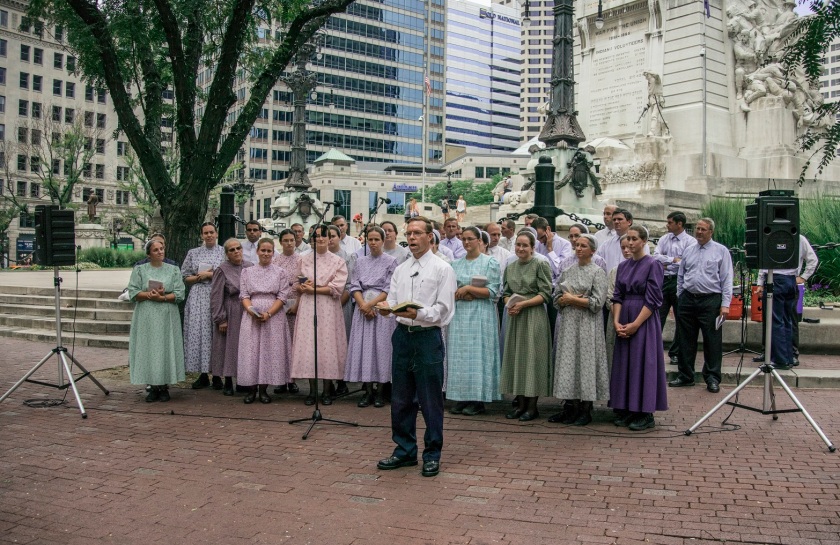 Circling them, on a pedal-powered bar (“The Pickled Pedaler) was a party of some sort (perhaps a wedding based on the sign on the back, which read, “Congratulations Tom & Ed”).

How you effectively avoid Mennonites and traffic in a town the size of Indianapolis–while drinking alcohol–is beyond us.  It’s also not clear how this doesn’t violate some drinking and driving ordinance.  Presumably, the steering-wheel operator doesn’t drink, but the people providing the power do.

Amidst all of this, it was also Gen-Con, a convention of strange people dressed as super-heroes and other characters.

It wasn’t quite the bar scene in Star Wars, but it wasn’t far off, and it wasn’t what we were expecting from Indianpolis, “The Crossroads of America.”

Benjamin Harrison, the 23rd President of the United States of America, was a native of Indiana. He raised a regiment during the Civil War, and fought as a general on the Union side. Interestingly, he was preceded in the presidency by Grover Cleveland and was, oddly enough, succeeded by the same man! Other aspects of his presidency were how his federal spending exceeded $1 billion for the first time in American history; he started the process of preserving places of natural beauty; and he strengthened the United States by modernizing the navy, making it the 5th most powerful in the world. This later may have come in handy for the coming First World War.

As a very interesting president, his home was just as special in that 70-80% of the furniture is both authentic (not replicas) and on display.

You can see his prodigious library, the many of the gifts that he was given in life, including a strange chair given by a Texan…

…made of Longhorn horns, a bobcat hide seat, and the overall look of Texas tacky.  We also saw his death bed, which was covered with the same comforter he used…

Harrison was a volunteer fireman, and the staircase was fashioned from a fireman’s hose… 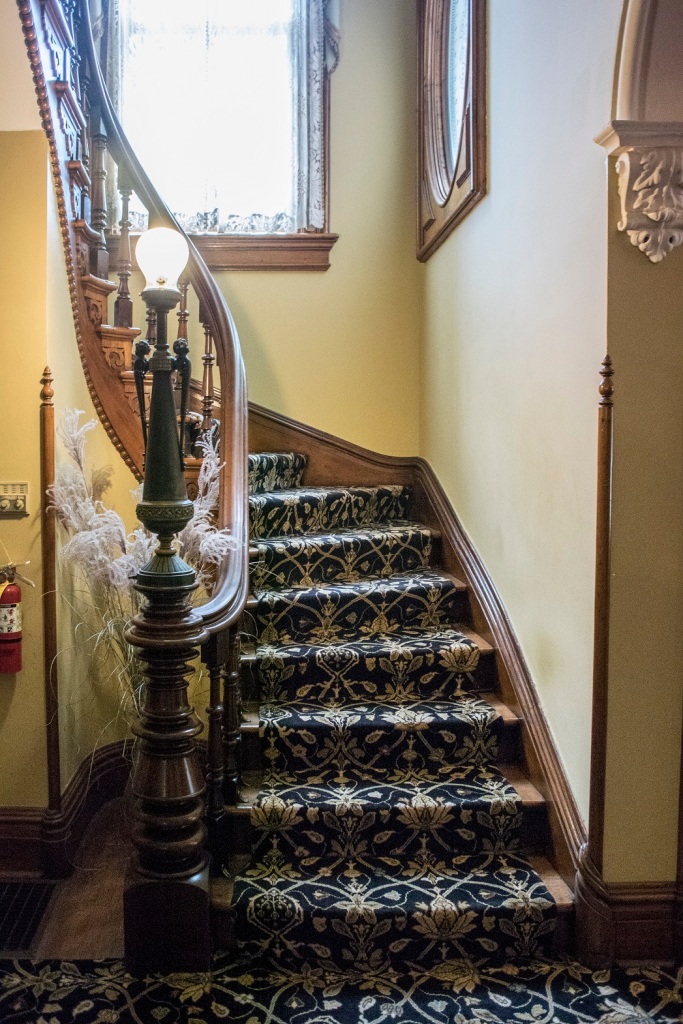 …and his desk was the height of 19th-century organization which, in our book, beats 21st century simplicity.

However, such an artifact was in no way detrimental to the rest of the home’s beauty…

…almost comparable to our next item on the day’s itinerary.

After leaving the home, we soon reached the Indianapolis Museum of Art. The art museum, to our pleasant surprise, shared a few similarities with Harrison’s home in that within the halls were exhibited works by Jacob Cox. Cox’s works were also present inside the Hoosier president’s parlor room. He and other Indiana artists were being commemorated in the “19th Stars” special museum exhibit which included renewed artists of talent such as T.C. Steele, Robert Indiana, and George Rickey among others.

After appreciating sights of silver mobiles, beautiful landscapes, and painted canvases with the intent to reflect on society’s morals, all from the creativity of Indiana natives, we continued on through the halls of the museum.

Nearing the first exhibit room we noticed that the art had been arranged in chronological order, allowing us to view a sort of art evolution. Beginning with the realist school of American painters such as Charles Wilson Peale…

and John Haberle, we were further schooled in the art of capturing the essence of reality. Such an aspect in art was truly captured in Haberle’s depiction of American currency in U.S.A. (1889). The oil painting was mistaken for real money upon unveiling which caused near tremulous sensation as viewers claimed the artist had glued money on a canvas. We later saw paintings of other American artists which we had seen on previous museums such as those by Georgia O’Keefe and a very expressive Norman Rockwell by the name of The Love Song.

Throughout the other rooms we viewed other artists of remarkable ability, one of which was George Seurat who rightfully deserves the description.  His pioneered pointillism-style of expression inspired fellow talented impressionists of his time such as Paul Signac, Henry Van de Velde,  Camille Pissarro (these being among Brian’s favorites), and Van Gogh.

Wandering through the other rooms we were delighted upon nearing a ver peculiar modernist painting by the name of Man and Woman. In a style resembling that of Picasso’s cubism, the shapes of color and shadows form two figures, a man and a woman, embracing each other’s kiss. Even though the depiction in itself was phenomenal, it was the man behind the brush strokes, Fernand Leger, that caught our attention. Between the years of 1948 and 1950 a young Huntsville artist by the name of David Adickes traveled to France to study art under the teachings of Leger. Adickes, as any Hunstvillian may know, was the talented sculptor who erected the Sam Houston statute which towers at the town’s edge. Satisfied that we were able to identify with one of the celebrated artists, we toured some more of the halls to later exit onto the grounds. With a scenic gushing fountain, the grounds were decorated by sculptures by Roy Lichtenstein…

…and Robert Indiana’s famous LOVE sculpture, which we have seen at three or more art museums throughout the US.

Robert Indiana, interestingly, was born Robert Clark.  But he changed his name to honor his home state.  Interestingly, one of his pieces, a 12-foot LOVE sculpture (which are obviously not unique) recently sold for 4.1 million dollars.

After enjoying the green fields of artistic delight, we regrouped in our mini-van and buckled up for our stretch towards the end of our trip. As we only have one more day left in our Mid-Western tour, we arrived in our hotel late at night eager to get some rest and prepare for an exciting last day of our odyssey, in Little Rock, Arkansas.