The LEAP Ambassadors are a bi-partisan organization.  The students who attended this inauguration signed up prior to knowing who would win the election, and the trip-goers included Trump supporters, Clinton supporters, and third-party supporters.  They attended not in support of any specific candidate, but to see part of US History unfold.

Over the years the LEAP Center has offered LEAP Ambassadors opportunities to contribute to their community through volunteering on campaigns. Regardless of the political party, the contested position, or the level of government, when “your” candidate wins, that feeling of joy is incomparable. During our 45th President’s Inaugural Address, Washington, D.C. was alive with Americans from all walks of life who were largely motivated by their ardent support of Donald Trump. While such sentiments didn’t necessarily extend to all of the Ambassadors, we were happy to be part of this historic event.

Even though our adventures began around 4:00a.m., the excitement kept us awake. We had heard the horror stories of previous Inaugurations, like Metro trains packed like sardines, so when we rode the Metro into the city we were surprised that we had seats. Once in D.C., we found our gate was already packed and so began the wait with the crowd. As soon as the gates opened, the crowd began to move and took us with them into our ticketed area. 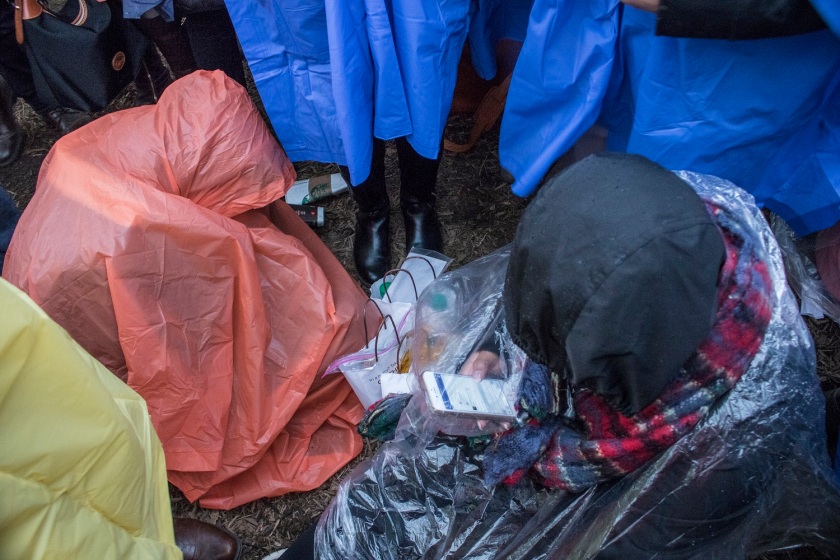 Fortunately, it was not too long before the sun rose, and with it a breathtaking sunrise over the Capitol that made our sleep deprivation worth it.

And, in reality, we were all happy to be part of this experience. 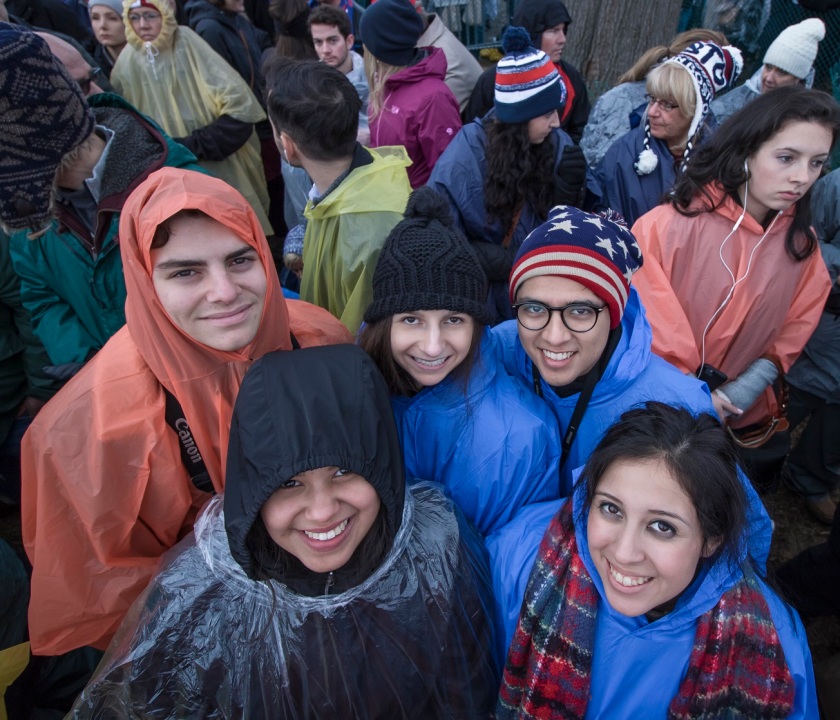 Around 10:30a.m. the music began, and the emcee began to introduce the platform dignitaries: Supreme Court Justices, current U.S. legislators, our nation’s past presidents. When former president Bill Clinton and former presidential candidate Hillary Clinton were introduced, a hush fell over the crowd momentarily before a polite applause began.  Moments later, however, when a close-up of the couple came on the jumbotron, booing began.

After the Clintons came George W. Bush and Laura Bush, but the excitement truly began when First Ladies Michelle Obama and soon-to-be Melania Trump were announced.  President Obama and Vice-President Biden were also given polite applause.

The crowd got even louder when Vice President Mike Pence took his oath of office, given by Supreme Court Justice Clarence Thomas.

But when our 45th president, Donald John Trump, was ready to be sworn in a roar of cheer resonated from every corner of the Mall. 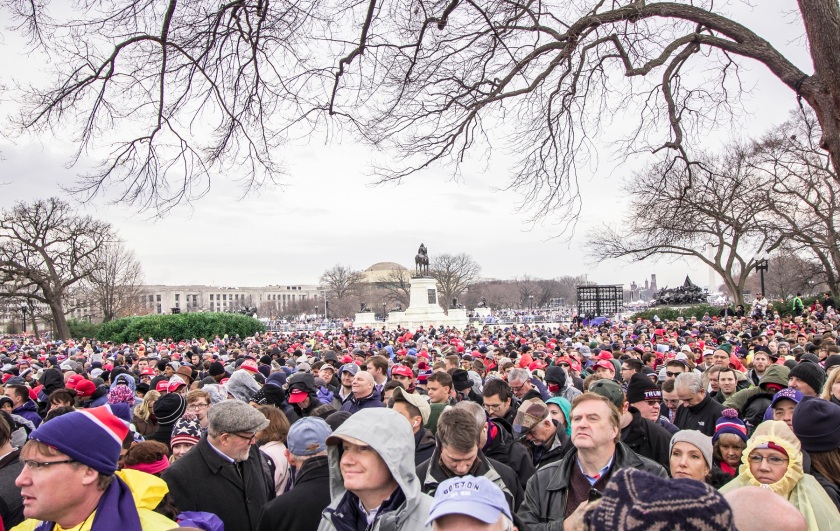 With applause, chants, and one or two disrupting shouts from protestors, we watched as our new President delivered his inaugural speech. “This, the United States of America, is your country,” were among his opening comments, and nearly every syllable carried cheers as the crowd roared with excitement.

Focusing on topics such as education, funding, the American dream, and a government ruled by the people, his words were felt so warmly in the hearts of supporters that fatigue, cold, and rain were overlooked.

The speech, although short, provided comfort for President Trump’s followers as they were assured that the next four years are going to be of prosperity and unity.

Others, however, were less than assured.  One protester screamed as though she were being tortured when Trump’s speech began.  Another blew an alarm whistle, perhaps trying to start a panic.

What we didn’t know, was that outside the inauguration’s perimeter, even more dangerous actions were unfolding.  Many protesters were peaceful, but some threw bricks and concrete; others began fires.

The LEAP ambassadors were fortunate to avoid these dangers, and remain safe within the inaugural gates.

The end of the President Trump’s speech also brought about President Obama’s exit from the presidency.  As other presidents have done, Obama flew away in Executive One, the presidential helicopter.

The entire experience was unforgettable.  Part of the LEAP concept is experiential learning, and the experiences we had today will stay with us forever. 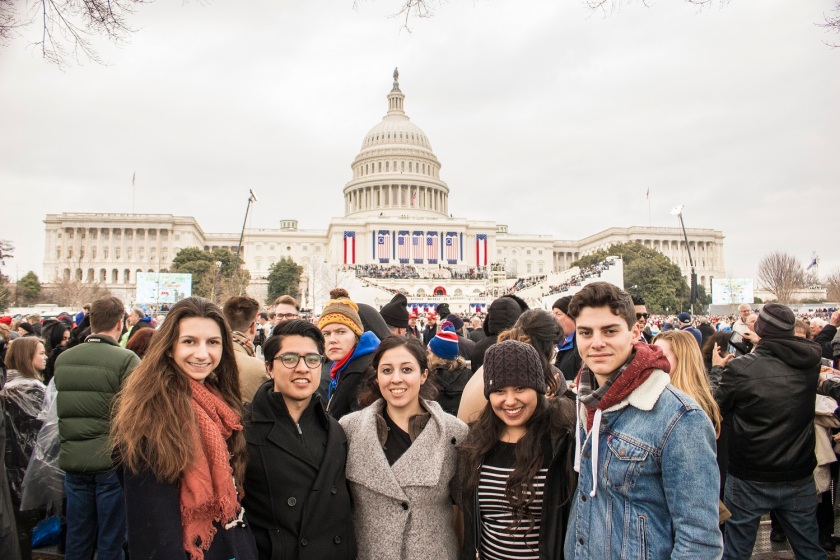 With so many hours of standing around after a very early start to the morning, the Ambassadors welcomed a power nap before dinner. Once we recharged, we made our way to Raaga for some Indian food, and a mini-reunion of sorts.

Through the course of LEAP’s history, also previously known as the Junior Fellows, the program has had high-achieving students, many of whom had attended President Obama’s 2009 or 2013 inauguration with the LEAP Center.  Some of these alumni have gone off to work in federal agencies, for state or D.C. legislators, and other rewarding jobs in the U.S. capital. During our dinner, we met with some of these alumni and friends:

Along with a savory dinner of lamb and chicken korma, rogan josh, various curry dishes, naan breads, and other spicy Indian treats, we had a very engaging conversation about career paths with these former SHSU students and LEAP alumni on how they got to where they are now. For us, this interaction was fulfilling because it showed us how taking opportunities and becoming dedicated at what you work on can truly lead to some rewarding professions. After such a momentous day, and a most enjoyable dinner, we said goodbye to our fellow Bearkats and new friends, ready to get some much needed rest.

LEAP Students learn a lot from other departments on campus. Many thanks to Gene Roberts and SLMS and Dr. Mary Conroy for letting us observe their simulated cross-examination.