A 4:45 a.m. wakeup call greeted the LEAP Ambassadors for another adventure-filled day.  We were on our way to Caddo Lake for our first sunrise boat tour. Once at the boat dock, we met up with our tour guide, Wes, and the tour started off with dark skies and only a hint of light in the near distance.

Some of us were accustomed to using a car, Professor Yawn, for example.  And, of course, Mark Burns is an expert.  For others, handling a camera was as strange as a foreign language.

While looking for new areas of the lake to photograph, everyone experimented with the different cameras and lenses. Among the natural beauty of Caddo Lake we were able to capture a few baby deer, even a beaver!

Before heading back, we stopped at an old bar, nicknamed “Teahouse”, that used to serve both Louisiana and Texas residents during the time of prohibition. The rules that were hammered onto a tree said it all: (1) There ain’t no rules, (2) There ain’t never been no rules, (3) There never will be rules.

At the end of the tour we realized that Caddo Lake hid many gems among its trees and we were fortunate to uncover some of them. 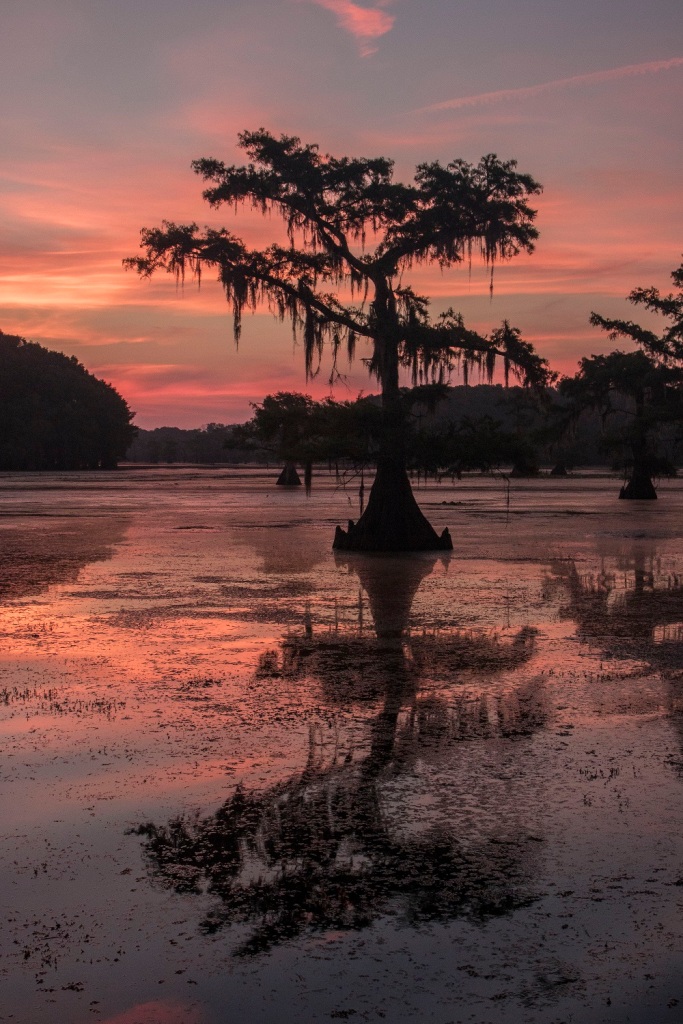 As the sun crept higher, we continued to our next stop of the documentary. Moving away from the main lake, we headed to Caddo Lake State Park. Burns had already selected a pier for his next photo shoot, one facing one of the more scenic faces of the lake.

However, this photo shoot held a special surprise for us. First, Mr. Burns set up his tripod and mounted a DSLR. Though a seemingly intimidating camera, with flashing sensors and countless dials, nothing compared to his next instrument which he took from one of the many bags scattered along the pier. From this particular bag, he pulled out a spectacular treasure.

Years before digital photography, pictures where taken with large format cameras. This consisted of large lenses, a heavy wooden box with bellows and focusing dials, and shades for the photographer to view its desired image. Atop of that pier, Burns set his own 4X5 camera to photograph the scene in a style almost as old as photography itself.

A performance in its own way, Burns began mounting his 4X5 onto the tripod. With precise movements, he meticulously focused the camera while curious gazes (and camera lenses) recorded his every move. Reading the light off the water, he judged what settings would be needed. To further prepare for the 1/30-second shot, he looked under a hood at an inverted, upside-down image of the nature scene being projected through the glass back of the camera. He had to be very mindful of what he was wanting to capture as it was a long, tedious process. But it was necessary to prepare for a shot with such a camera.

After witnessing this photographic ritual, we decided that it was time to head back to the lake. However, we could not take all our camera equipment on our next lake voyages.

Once we finished the sunrise tour, and photographing Caddo Lake from the pier, the Ambassadors caravanned to Uncertain, where we explored the lake by kayak and canoe.  While some of the Ambassadors were familiar with kayaking, some were new to canoeing (and a little uncertain about it!). 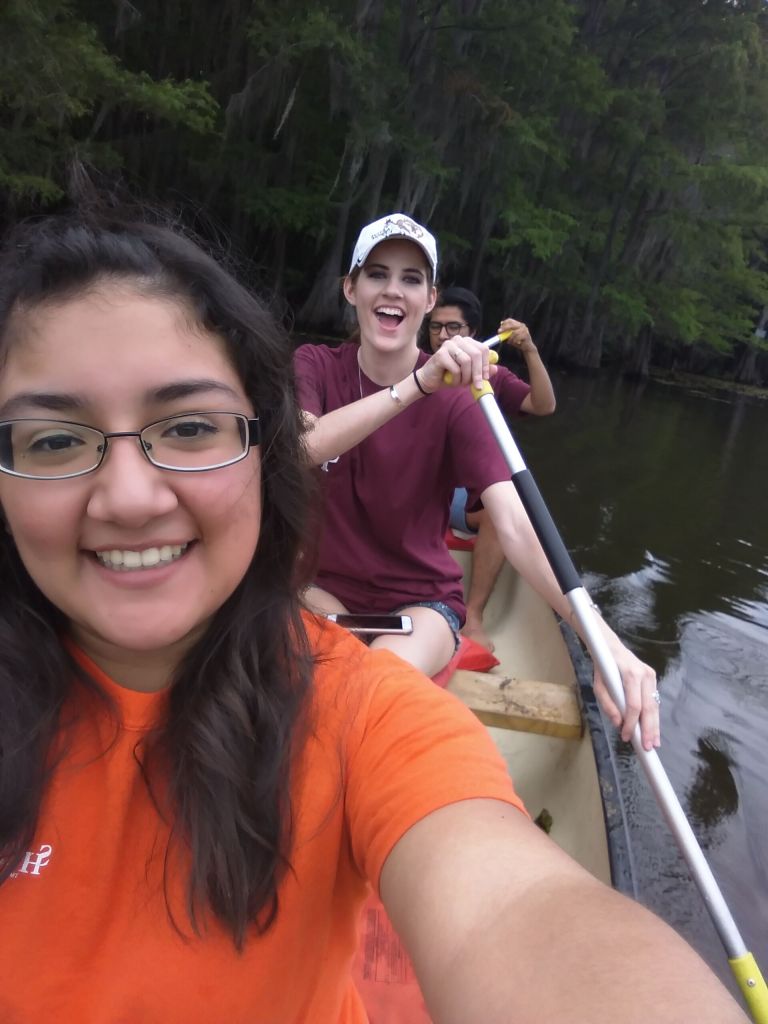 Eventually, though, we all got the hang of it and enjoyed the outing, using the smaller boats to our advantage to explore otherwise inaccessible regions of the lake.

With a day full of outdoor adventure, the LEAP team headed to downtown Marshall. As our first stop of the town’s downtown tour, we visited the Michelson Museum of Art.

Now, how much does a Russian-American artist have in common with an East-Texas town like Marshall? Not a whole lot. Yet, Marshall holds a special relationship with Russian American, Leo Michelson. At first, this artist was fearful of offering his artwork to a museum, thinking that his work would never receive the proper recognition. However, Janine Michelson, Michelson’s widow, chose Marshall–the hometown of her friend Wendy Russell Reves–as the repository of hundreds of her husband’s works.

As we went through Michelson’s works, we appreciated his masterful brush strokes and artistry. 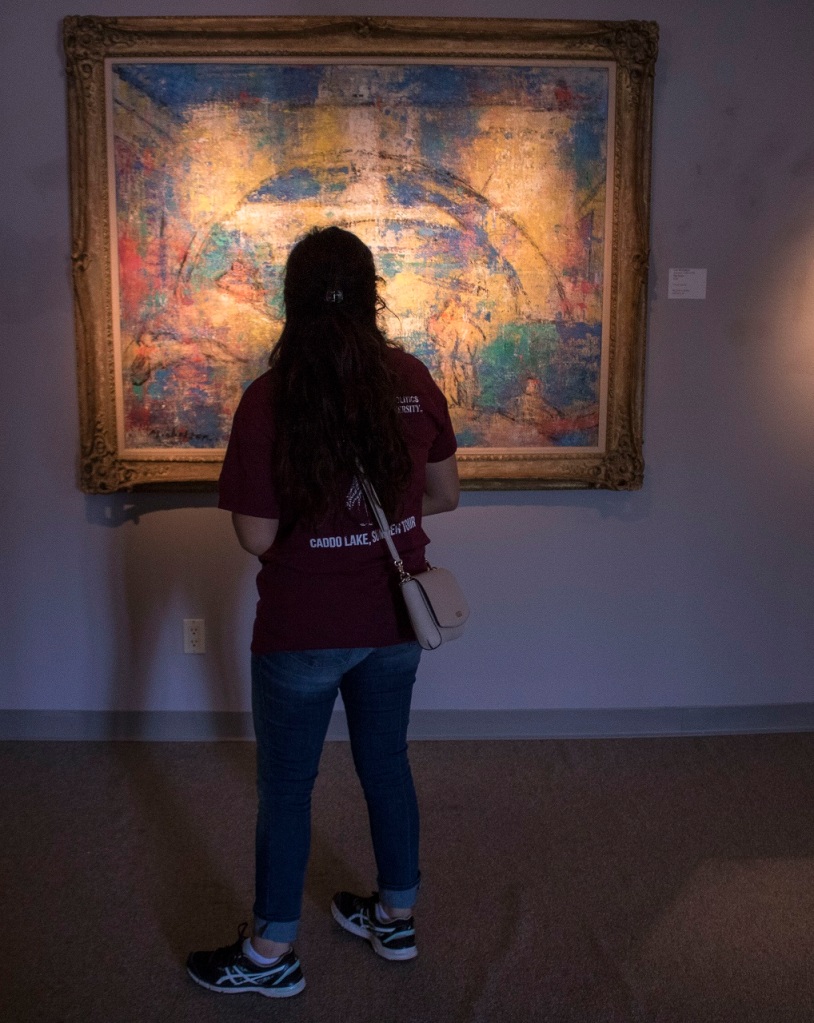 Some of us quickly found favorites. For Christina, her gaze was drawn by the allure of Birds on the Atlantic.

For Brian, the mysticism behind Viewing Audience called to him as he chose the piece as his favorite. 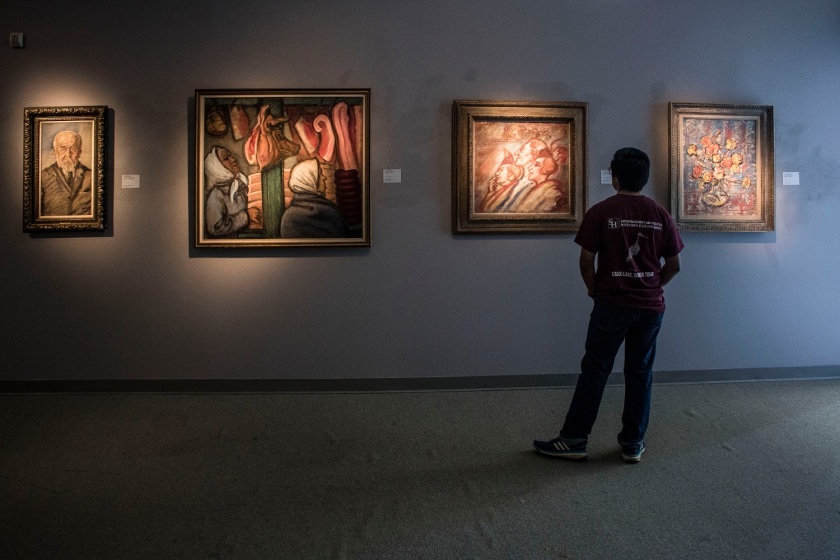 As always, we looked for similarities between Michelson, whose artwork was new to us, and artists we had seen in previous art museums. We judged how unique his depictions were. Using oil for most of his paintings, his talented mastery of the brush allowed him to create lines as delicate as the strokes of a pencil. Faint and serene, these colors created an ambiance of peace. Coupled with the serenity from the Caddo Lake scenery from earlier in the day, we felt the spirit of Marshall carry us outside of the Museum, through its picturesque downtown, and into the historical Starr Family Home.

Being that the city of Marshall was such a big historic site, we could not miss visiting the Starr Family Home. Unexpectedly, it held a close connection to the Leap Ambassadors. Dr. James Harper Starr first moved to Marshall after the end of his political career. He first became appointed as the president of the board of land commissioners by President Sam Houston and afterwards, as the Texas’ Secretary of Treasury by President Lamar. Dr. Starr helped with the relocation of government from Houston to Austin. In Austin, James Harper was also one of the primary designers deciding where the streets and Capitol would be placed. It was fascinating to be able to connect the Starr family back to Sam Houston, whom our university is named after, and the city Austin, where many of the ambassadors had lived for five months working the legislative session. However, that is not the only reason that Starr was important. After his career in government ended, he moved to Marshall, where he opened the city’s first bank and helped create new railroads to bring in more settlers. Thus, he became instrumental to Texas’ growth. Starr County is named after this great man.

At the Starr home, Maincroft, we were first taken to the parlor, just like any guest in the 19th century would have. Once we stepped into the room, it was as if we had been transported into another century altogether. A golden, half -electric/half-gas chandelier greeted us with its soft, warm light, while antique furniture surrounded our small group, and the golden framed portraits of Clara Starr and her parents silently gazed at their new guests. One of the main items that captivated our attention was a small antique stereoscope.

This artifact had a left and right eye view of the same image that would create a three-dimensional image. As the tour went on, we noted a couple of interesting items in the house including speaking tubes (which called the servants to the first floor of the house), bookcases that had supposedly been a set of 26 after each letter of the alphabet, beds covered with a mosquito net all the way from Australia, and a wonderful master bedroom.

After a final pause for a photograph on the steps, we headed out. 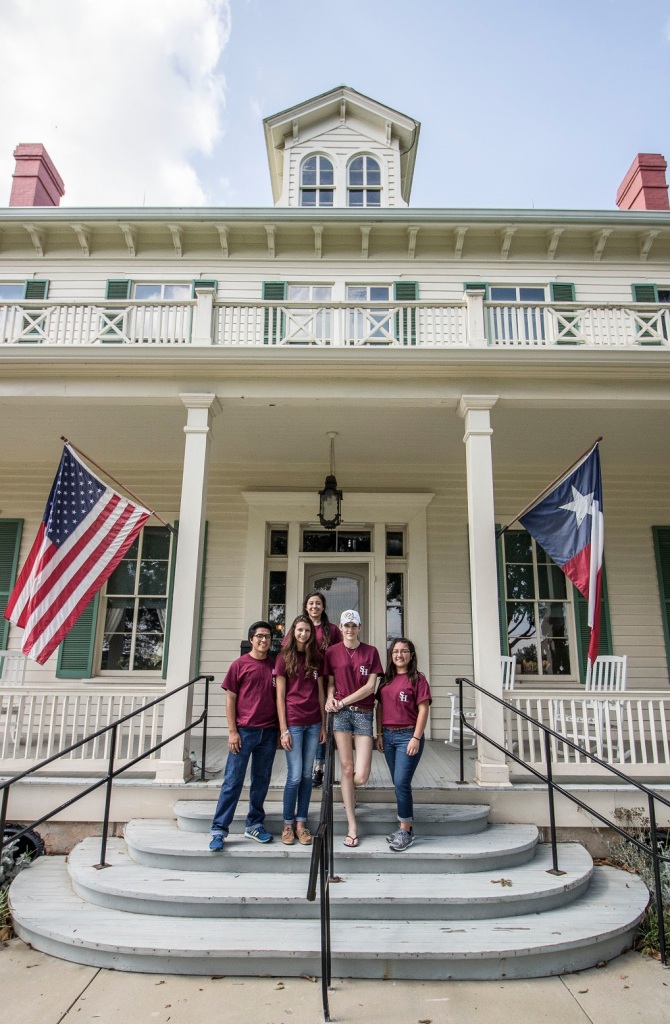 The LEAP Ambassadors ducked into the hotel to regroup after a fun-filled afternoon, devoured a quick bite for lunch, grabbed the photography equipment, then headed back to Caddo Lake for our sunset tour.

Wes was once again a wonderful guide, and he generously took us to the nether region of the lake for a less-toured spot.

We ducked through a channel of overhanging trees…

…dodged freestanding tree stumps, and eventually entered a beautiful pocket of trees, all the while watching how Mark Burns worked.

Wes taught us more about the history of the prehistoric trees that lined the banks were scattered throughout the lake.  The bald cypress trees are between 1100-1500 years old.

Because their seeds can only germinate on land, no new trees will grow in Caddo Lake.  Nonetheless, there is a timeless quality about the place, and we enjoyed our scouting expedition, taking photographs, watching the wildlife…

…and even taking turns at the wheel. 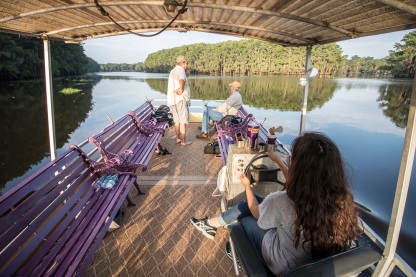 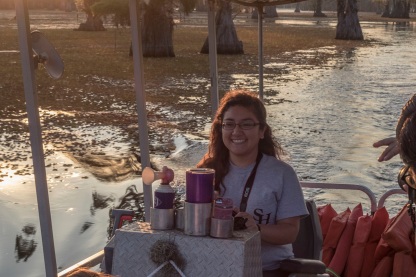 Mark Burns also took time out of his shooting schedule to teach us the basics of the equipment.

We were even blessed with a rainbow! 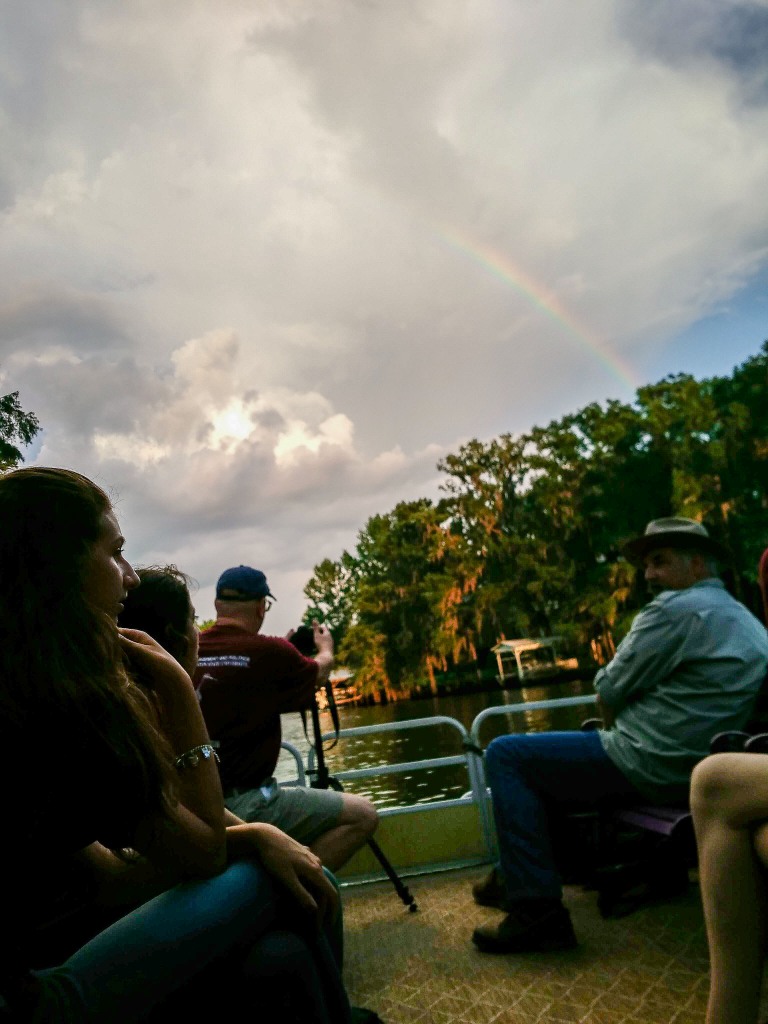 And blessed with a lot of fun, too! 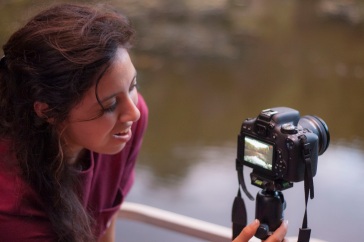 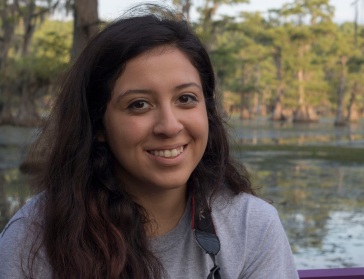 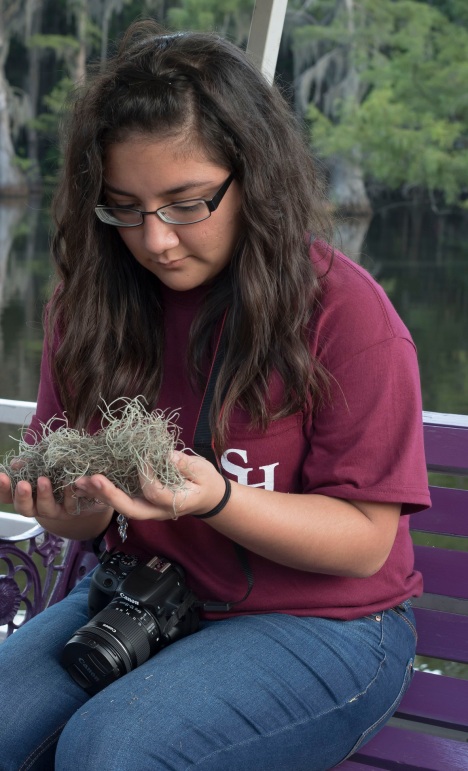 And speaking of blessings, those who did not go on the tour volunteered to grill hot dogs for us, so when the tour ended, we joined our comrades at the grill and finished the day with hot dogs, chips, and smores. It was a sweet end to a wonderful day. 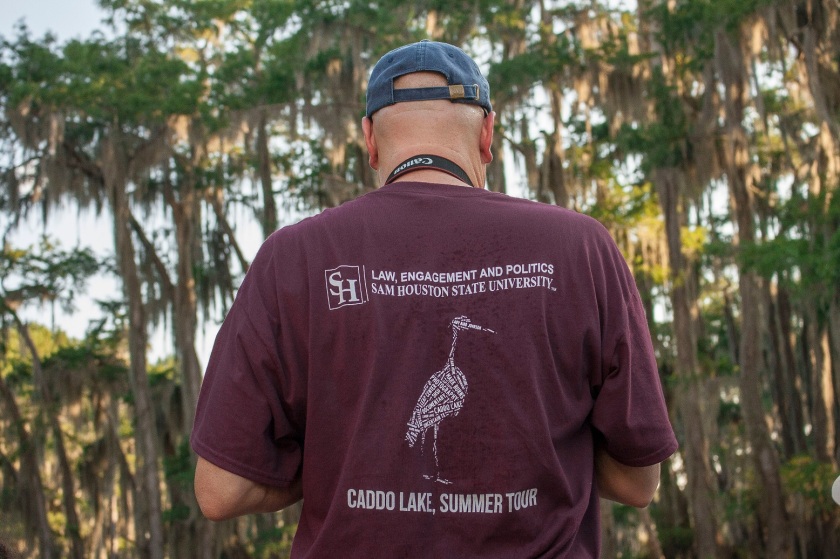