Acclaimed photographer, Mark Burns, unveiled his National Parks Photography Project in 2016, displaying his black-and-white photographs at the Bush Presidential Library. After accomplishing this feat, Burns became the only photographer to capture all 59 national parks in black-and-white.

Akin to Ansel Adams, Burns is drawn to the wilderness throughout his quest to capture the perfect image. After having portrayed the magnificence of sites across the United States, this Houston-based photographer was called back home to the beauty of his own state. Mark Burns has now begun his newest project: to photograph Caddo Lake in Uncertain, Texas.

Given its proximity to SHSU and the relationship that the LEAP Center has forged with Burns, the LEAP Ambassadors decided to initiate a documentary on Burns and his work.  Commissioning two MCOM students–including Sierra Dolch, who accompanied us on this trip–the Ambassadors, Dolch, and Burns set out for Caddo Lake.

This trip was primarily a scouting trip, a chance to find the most photogenic spots on the lake.  Later, we’ll return in the fall to exploit the season’s vivid colors and exploit our knowledge of the lake.

The excursion began on Friday, July 14, with thunderstorms hovering over us and lighting cracking through the heavy showers.  But as we arrived in the small town of Uncertain, TX (population 94), the skies cleared just enough to avoid rain, while still providing us with a nice photographic backdrop.

Among the Spanish moss-covered cypress trees, we discovered Blue Herons… 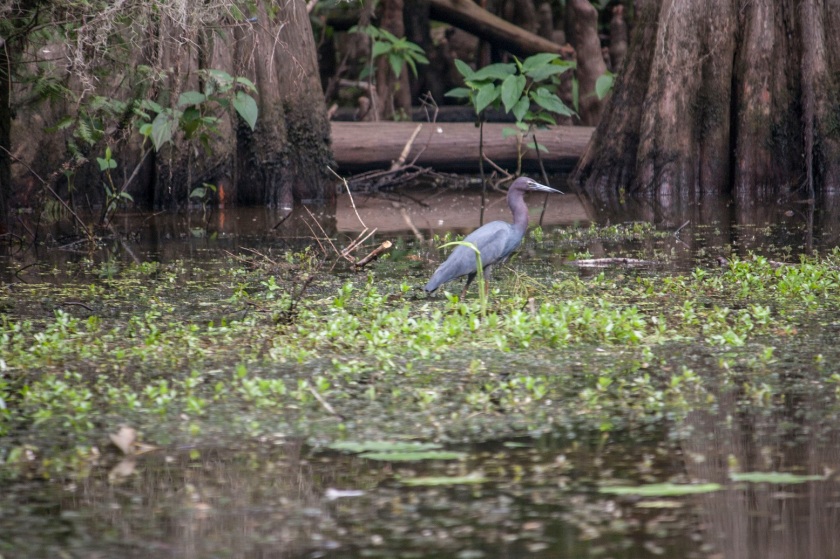 Everyone was captivated by the lake’s fauna and flora as we glided over the serene water. The looming trees contrasting against the glistening water made for an endless vista that had us all amazed.

Yet, Mark’s ever-searching gaze never wavered. While we floated down the river, there were moments when he asked our boat’s captain, Wes Holland, to stop his vessel. Focused on the scene that had captured his attention, he set his camera, reflected, and shot. 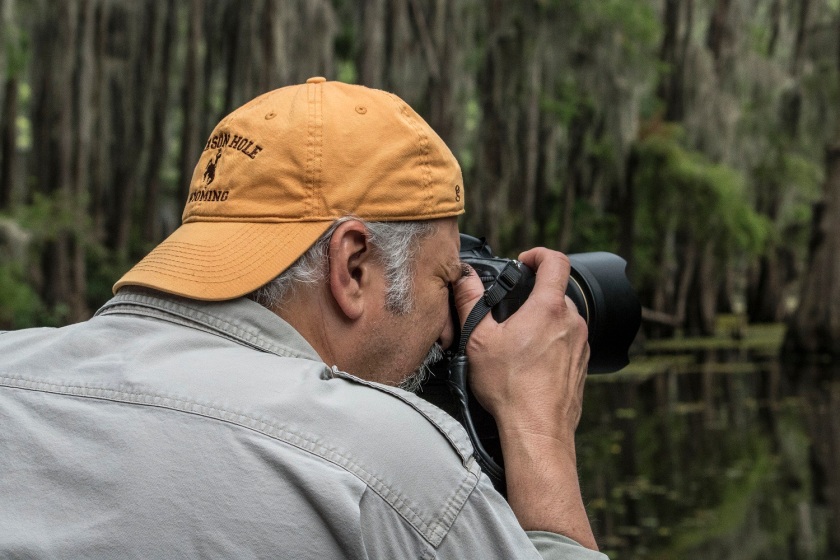 Whether it was the creeping rays of a setting sun, the shine off the water lilies, or the glow of a sky at golden-hour, Mr. Burns knew what would look best through the lens of his cameras. 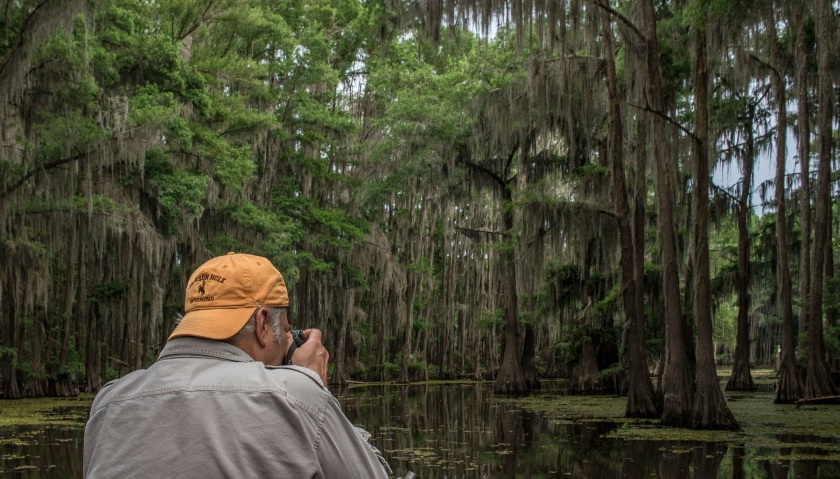 All the while, Sierra Dolch did her best to capture the environment in which Mark was observing and working…

Eventually, the sun’s last rays were nothing but vanishing purple and red streaks across the darkening sky…

…which made for a pretty soon, but soon led to decreased visibility, and we turned back for the shore.

…who kept us on time, on track, filled in some interesting facts about the lake, and even let Brian steer!

But our learning experiences were not over!  In the hotel, we were joined by a second crew of LEAP Ambassadors who got a late start because of work.  When they arrived at the hotel, we gathered in a hotel room to learn about using film from a 4X5 camera, which Burns will use on this trip (and other trips).

With Sierra providing instruction to Brian, the camera was set, and we were ready for our group tutorial.  The film has to be kept in a cool environment, so Burns transports it in a cooler.  He then has to ready the film for use, which has to be done without exposing it… 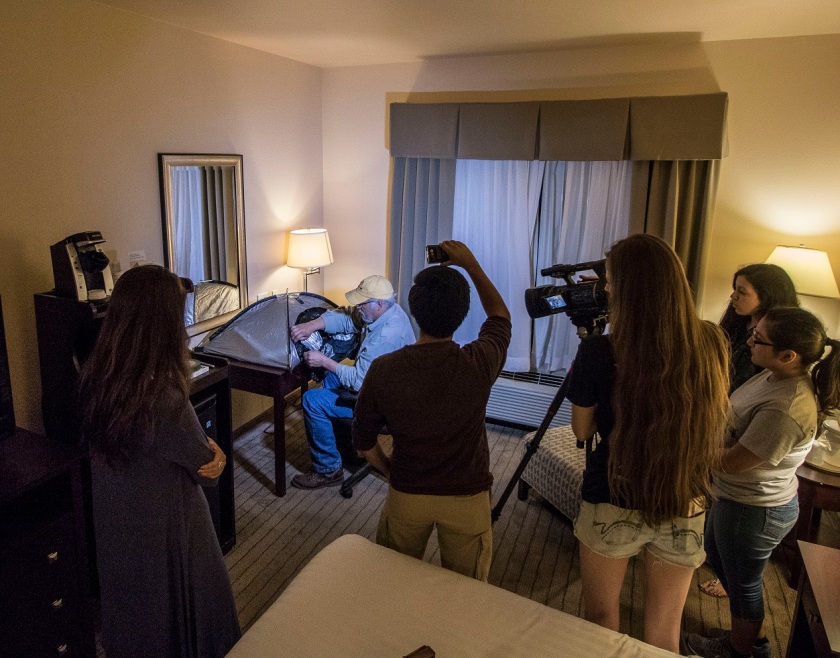 …which is accomplished with a film-changing tent. This device allows the photographer to position the film in sleeves without exposing it.

It can be a cumbersome process, with the photographer using braille type markings to know how to position the film.  But Burns was able to prepare about ten frames of film and tutor us in about 15 minutes.  It was an interesting coda to an interesting day. 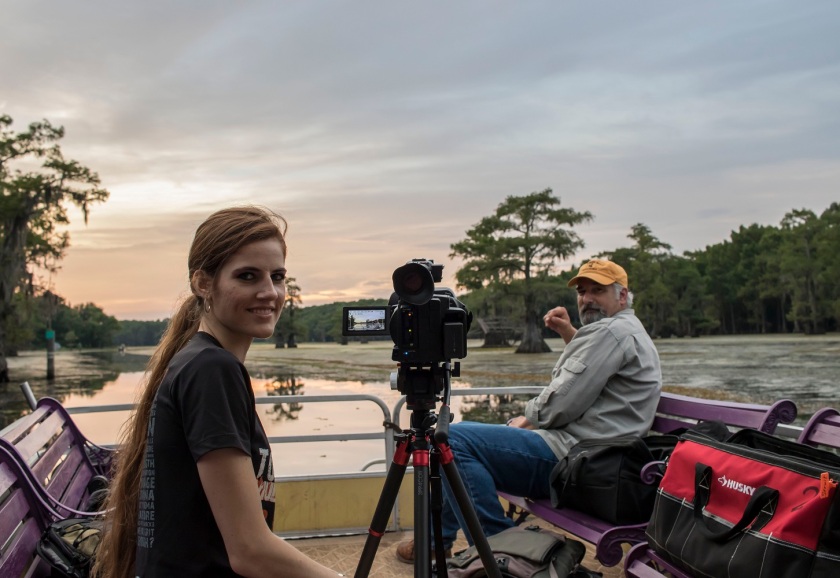