The LEAPsters are still on the road and, today, we experienced a mix of natural beauty and minimalist art, which is sometimes beautiful and sometimes curious!

After a quick coffee break and crepés at Cedar Coffee Supply, we started our drive towards Marfa,Texas. where we began our tour of the Chinati Foundation. The Chinati Foundation, named after the nearby Chinati mountains, houses the works of Donald Judd and a few of his contemporaries. Judd, the acclaimed minimalist, refurbished a decommissioned cavalry base in town as an art foundation. He created the foundation to give his works the home they deserved. Judd believed in having control of the environment, the architecture, and the perfect lighting when showcasing his works. Unsatisfied with common art museum and gallery practices where he had little of this control, he created this foundation. Now, in this small community of about 2,000, there are 13 permanent installations by Donald Judd and other like-minded artists.

The first installation that we viewed was by Donald Judd. 100 untitled works in mill aluminum is a collection of 100 “specific objects,” as Judd liked to name his sculptures, of aluminum panels formed into rectangular prisms. All 100 pieces have dimensions of 41 x 51 x 72 inches and are housed within two old military warehouses that Judd refurbished to allow natural light to illuminate his metallic pieces. His pieces, just like the works of all the artists in the foundation, are highly conceptual. With some of his pieces seeming like they floated off the ground, while others, with their mirror-like walls, seemed to disappear against the background.

Our tour guide Glenn was very nice to our group, composed only of the three LEAPsters and Professor Yawn, and he agreed to compress the normal five hour tour to about two and a half hours. Therefore, we sped through the works of Carl Andre, Richard Long, and Dan Flavin. 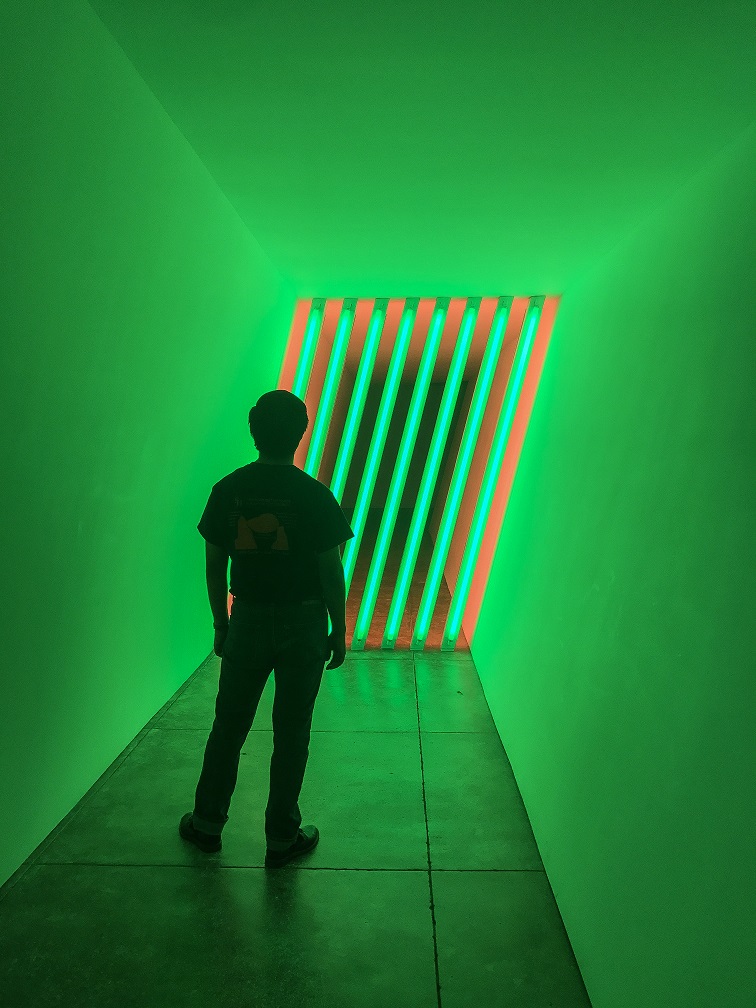 This last artist’s works were among the favorites in the group. With no real title, The Marfa Project, as it has come to be known, are Flavian florescent lights that are housed within six abandoned barracks of the base.

Each barrack has a different arrangement of these lights, with different colors radiating from within as well.

Flavin arranges the lights to provide the viewer a participatory role in his art, as guests enter halls from which his light emanates, and become one with the florescent radiance. 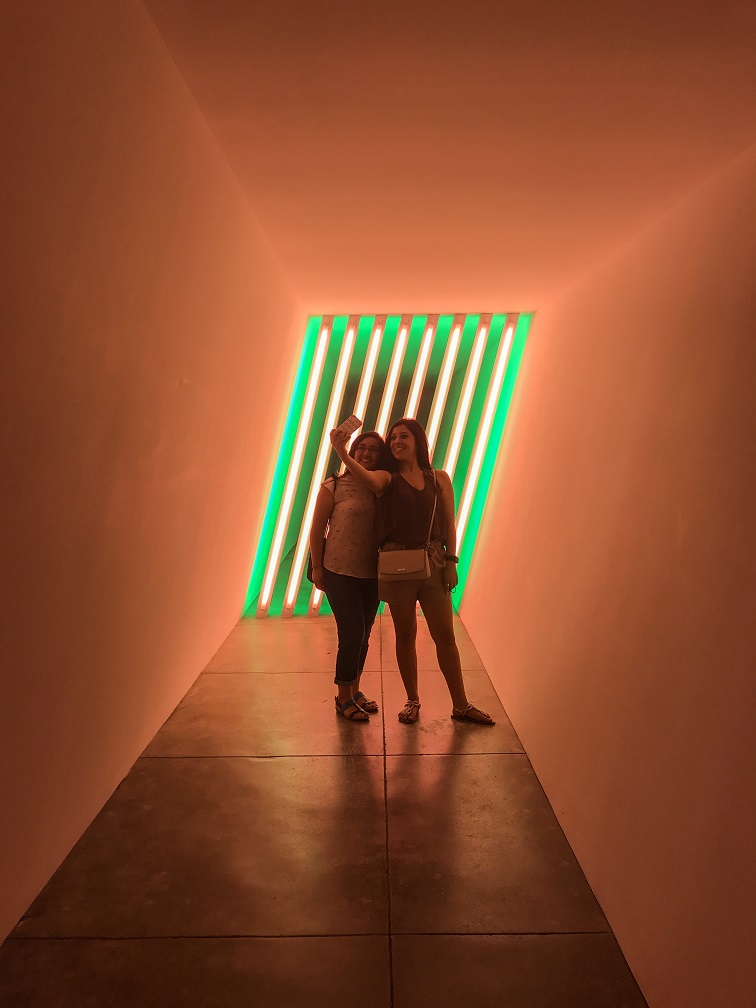 Near the barracks, our tour guide showed us a sculpture of Claes Oldenburg. In his Oldenburgian style, this particular work was an enlarged horse shoe. As it turns out, Oldenburg created this sculpture to pay tribute to the last cavalry horse that was housed in the base.

Another favorite in the foundation was an installation by Ilya Kabakov. For his installation, titled School No. 6, he refurbished an abandoned barrack to resemble an abandoned Soviet era classroom. The interior of the installation is made to look old and dusty. In fact, during the reconstruction of the barrack, the designers added features that made the building look more weathered and old. Inside, the “classrooms” were riddled with Soviet newspapers, desks, Russian children’s books, old instruments, and other Soviet artifacts that he considered would belong in a classroom. One feature of this installation that interested us the most was how Kabakov created anecdotes and fictional characters for his installation. When inside, certain artifacts have stories attached to them. An old rag, for example, may include story alongside it of how a mischievous boy, after using the rag to clean off old paint from his desk, throws it around at his classmates during recess. Although these are fictional, just like the entire installation, it showcases the playful imagination of Kabakov.

After touring the The Arena, a gymnasium that was repurposed and designed by Judd to house a courtyard, kitchen, and dining tables (designed by Judd), we headed towards an installation by Robert Irwin.

For his installation, he took an abandoned medical building to play with the light and darkness of the interior. Using sheets and tinted windows, he creates a gradual change from darkness to light inside the building. In LEAP terms, one side represented a cheerful, light-filled Beatriz, while the other side represented a dark, somber Christina.

But with a happier tone, we toured the last installation of the tour, which was located outside of the grounds of the foundation.

This last installation was created by John Chamberlain. Located in downtown Marfa, the warehouse contains twenty-five of his works. If you are not familiar with his conceptual art, his sculptures are created from car-scraps that he unites to form a single unit.

As described by our tour guide, “he creates 3D renditions of abstract-expressionism.”

Since this was our last installation of the tour, we said our farewells to Glenn, and promised that we would come back in the near future.

Lunch at Squeeze
By Christina Perez

Before heading into Big Bend National Park, we decided to try one of Marfa’s most well known restaurants. Squeeze Marfa is a Swiss café located in the heart of town. It started out as a juice bar but now has sandwiches, soups, and smoothies. It’s well know for its chocolate since it is the sole US distributer of Vollenweider chocolate. Professor Yawn ordered the Squeezadilla which had swiss cheese, gouda cheese, and ham on pita bread, and after having a bite of it, we all decided that it was the best plate in plate. Each of us tried new things like Brian’s Apple Zing smoothie or my Strawberry Banana Cabana smoothie. For anyone considering a visit to Marfa, Squeeze is definitely worth the try! 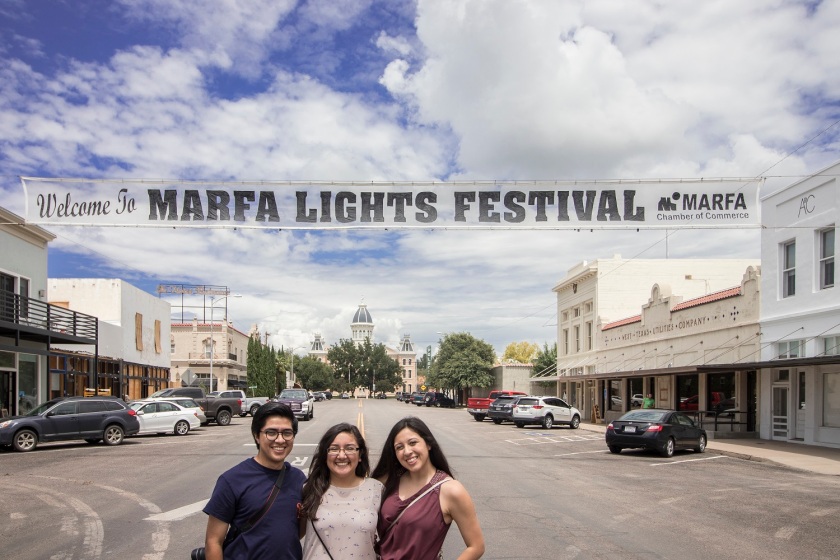 After taking a stroll through downtown, taking a few group pictures, and visiting the famous Hotel Paisano, which once housed the star-filled cast of the 1956 film Giant…

…we drove back east to Alpine to pick up our fellow LEAPster, Kaitlyn Tyra.

After flying into Alpine and spending two days at Sul Ross State University for the Texas State University System Board of Regents Meeting, I was lucky enough to join my fellow Ambassadors and Professor Yawn for the second half of the West Texas Tour. My first activity of the trip was hiking at Big Bend National Park!

Although the rest of the group visited Big Bend the day before, we all eagerly loaded up and prepared for an exciting afternoon of hiking. Our drive from Alpine to Big Bend National Park was roughly two hours. This gave us plenty of time to prepare our backpacks, fuel our bodies with healthy snacks, and rest our feet for the adventurous hike ahead.

Our first hike of the afternoon was to Balanced Rock. I was excited to embark on the short hike after seeing many photos of the famous landmark, including Mark Burns’ photography. The hike was only a 2.2 mile round trip. We walked along the gravel-filled, sandy pathway…

…admiring the desert landscape that surrounded us until we climbed a few steps up to Balanced Rock. 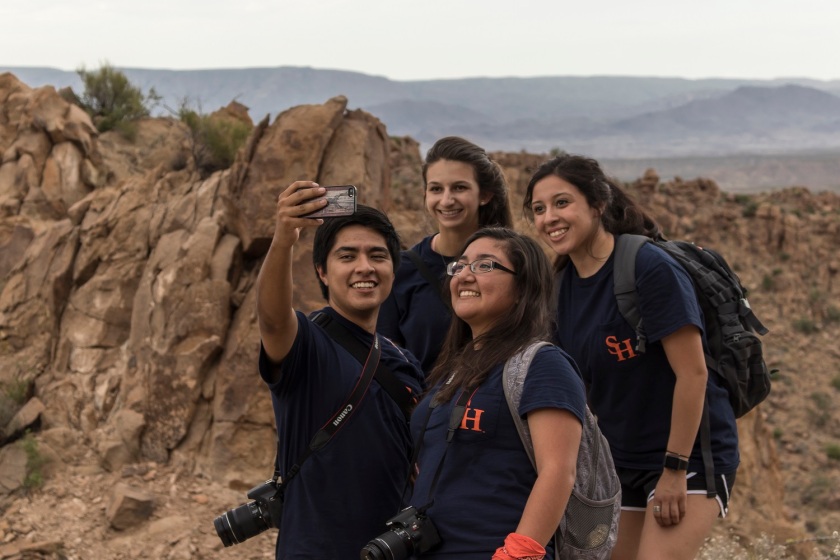 The view was amazing and we took many pictures to try to capture the beauty before hiking down to our car!

Once we arrived safely at the van, we hopped back in and drove (30 minutes!) to our second hike.

Lost Mine Trail was a much longer hike. 4.8 miles round trip and 1100 feet in elevation, the hike was challenging and rewarding. 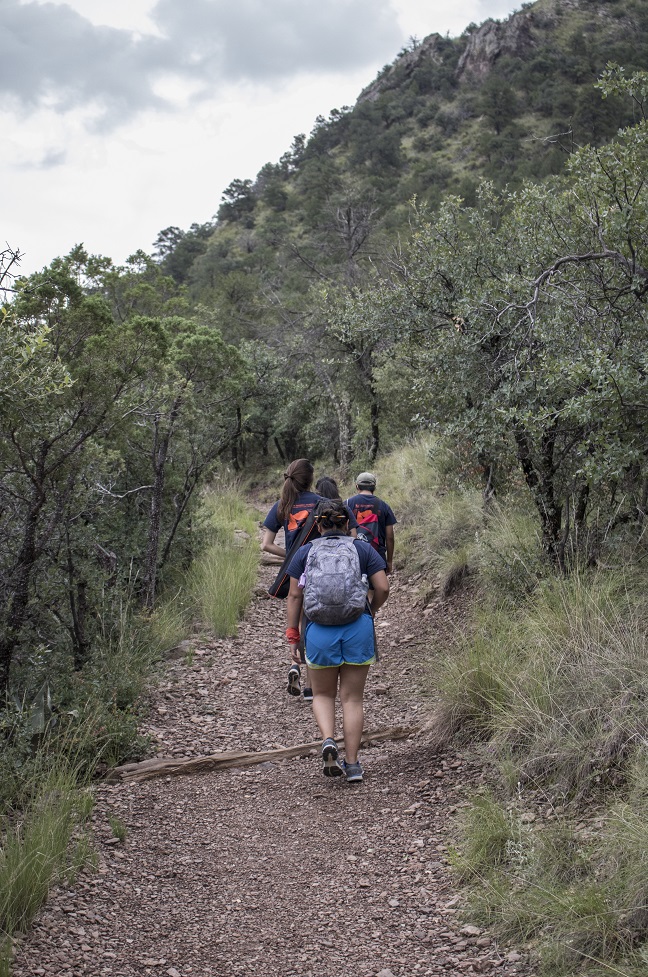 We walked along paths, climbed up man-made steps, and even over rocks that were naturally part of the pathway. 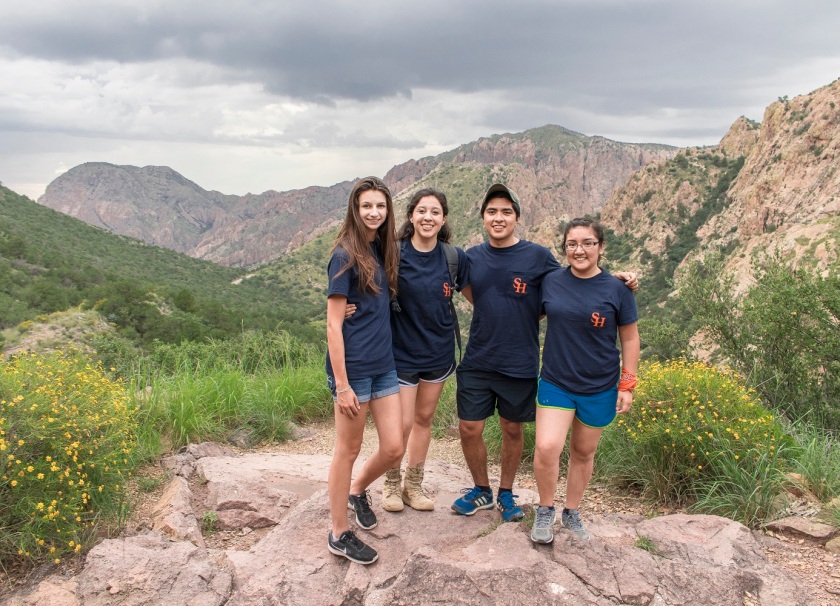 The trip up the mountain side took us around an hour and a half, but we enjoyed admiring the views of the nearby mountains and watching rain fall in the distance.

Once at the top of the mountain, we could see miles of Big Bend rolling hills and appreciate our hard work hiking up the mountain side. 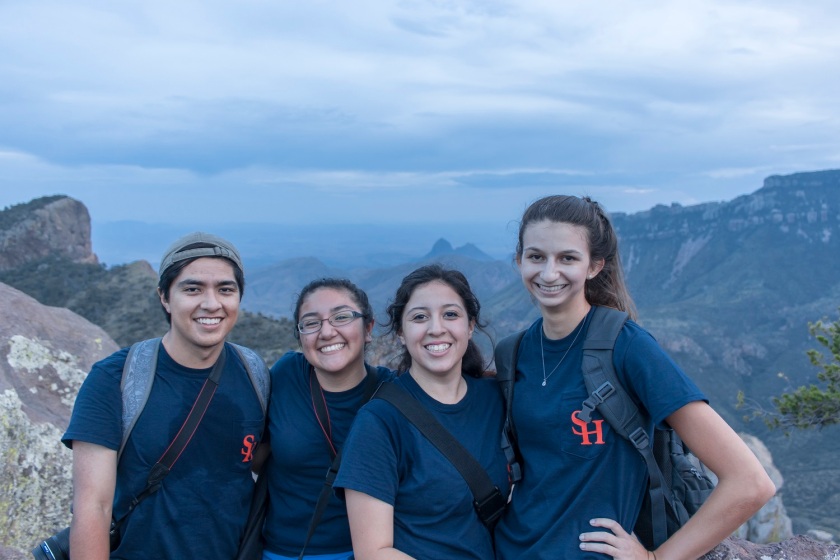 With the setting sun and storms nearing, we cheerfully hurried down the mountain singing songs (literally!) of happiness because of all we experienced at Big Bend. 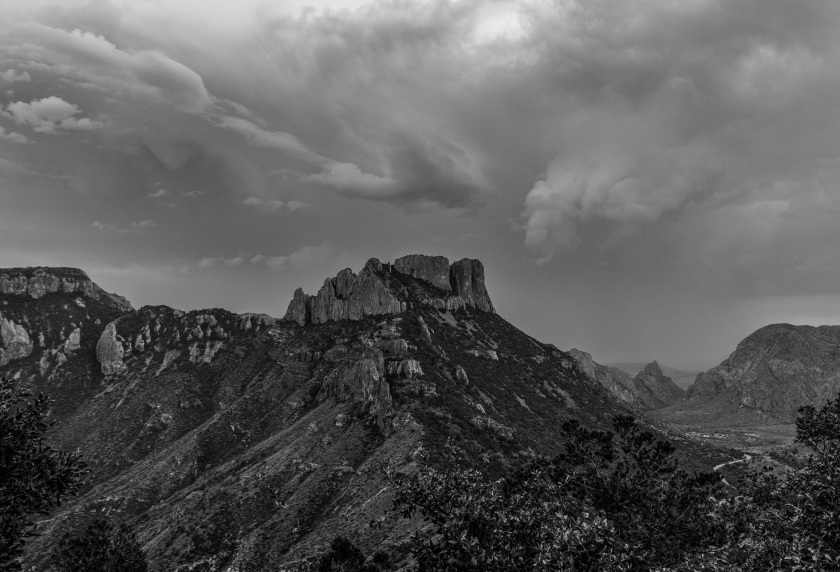 It was an adventurous day with a few scraps here and there, but a success nonetheless! The LEAPsters loaded up and departed on our journey back to Alpine once again. 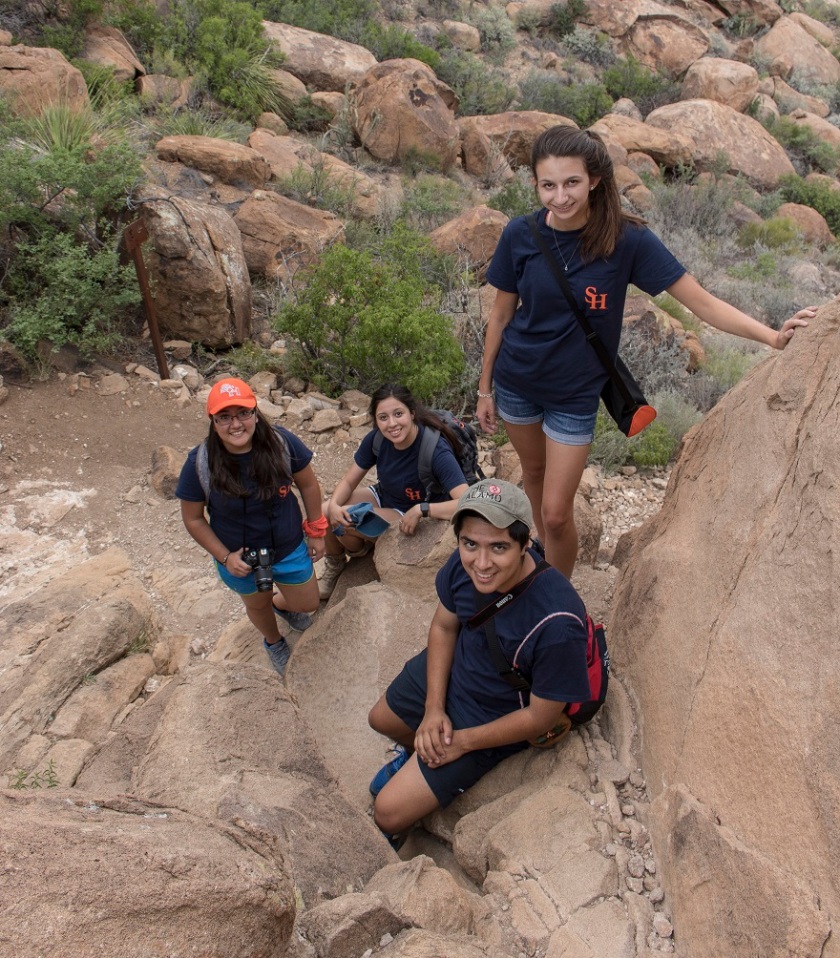