As our last full day at Caddo Lake has finally arrived. Although there was a hint of melancholy as our trip is drawing to an end, there was still much more adventures to dive into throughout the day. 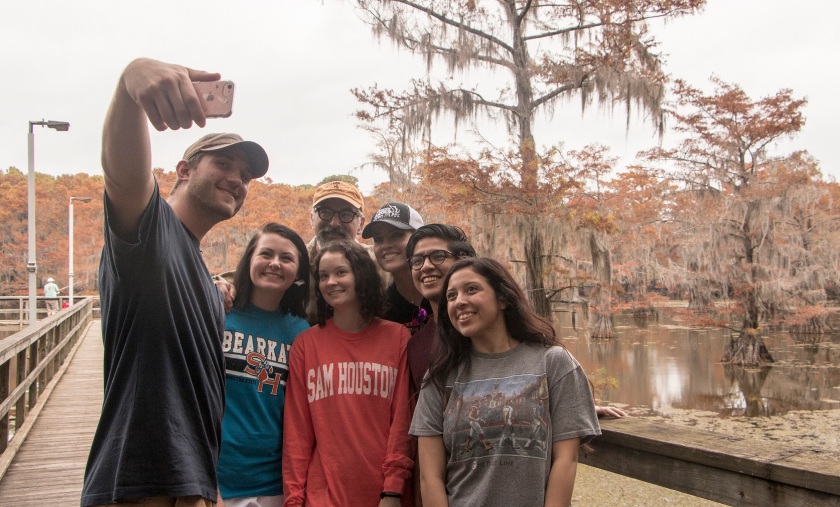 Throughout the trip we observed Mark Burns perform his photography with his digital Nikon cameras. However, on Saturday we witnessed his talents in the older art of photography when he used his 8×10 large format camera to capture the sylvan beauty of the Caddo Lake State Park.

Mr. Burns positioned himself at the end of the pier.

He framed his camera to photograph a water full of giant salvinia in the foreground and the towering cypress trees in the background. As he was setting up this grandfather of a camera, Mr. Burns gave Makayla and Ryan a chance to see through the camera’s window-like view finder.  Due to the behavior of light when passing through an aperture, the image that appears on this glass surface is upside down and reversed. As Mr. Burns explained, “you’re not looking through the view finder, you’re looking at it.” Projected on this glass surface, Ryan and Makayla looked at this parallel photographic universe, where reality was reversed and upside down.

As part of the documentary, every action taken by Mr. Burns was videoed and photographed.

Whether he was setting up his camera, cleaning a lens, or looking for the perfect scenery, there was always a lens pointing his way. 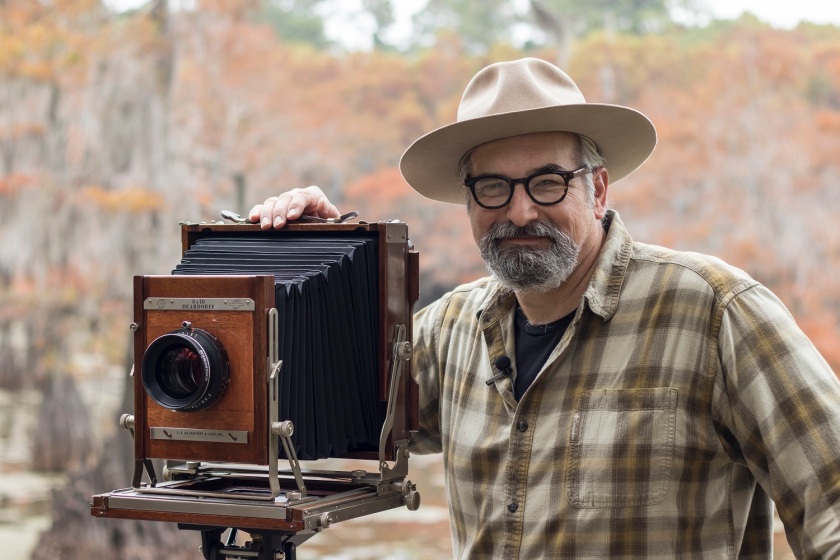 With this entourage of cameras, we took an opportunity to get photos with Burns…

…and then we relocated from the peer to an amphitheater located across the roadway from lake.

Again, cameras were positioned, microphones were set, and the interview proctored by Professor Yawn began.

Topics included Mr. Burn’s photography preparation work, how he developed an interest for photography, and his overall experience in Caddo Lake. The interview will add an educational perspective to the documentary. 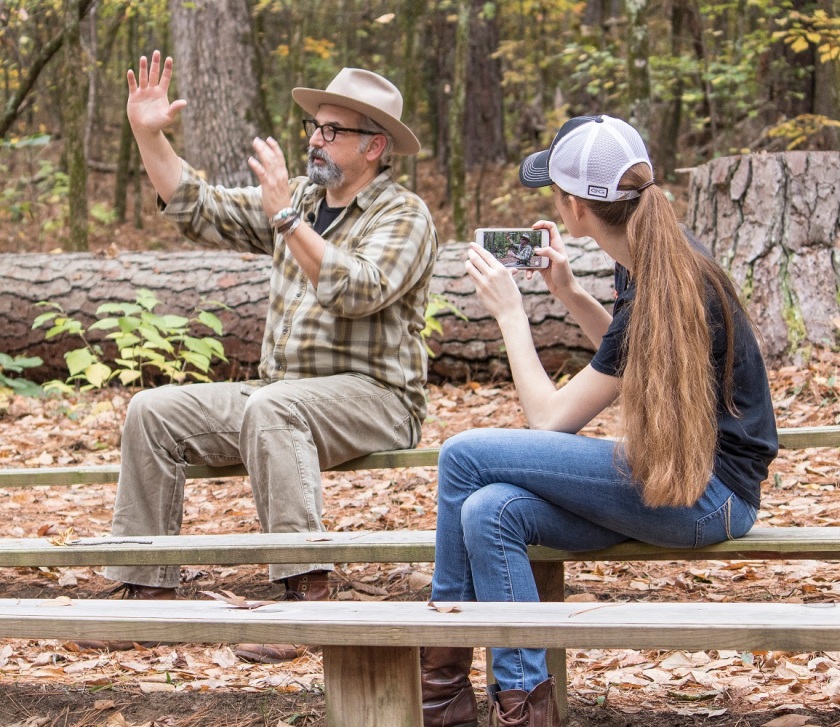 Canoeing at Caddo, By Ryan Knesek

In addition to the guided tours of Caddo Lake, LEAP Ambassadors braved the waters in a three-person canoe. This experience took place at Johnson’s Ranch Marina where Ambassadors were given a warm welcome and a crash course in the basics of water safety. These soon came in handy, but more on that momentarily. We were given a quick run-down of maritime law. For example, we now know that when meeting an incoming boat, the port side is where to meet from.

After we secured our life-vests, grabbed our paddles, and settled ourselves in the canoe, we headed off into the watery voyage of Caddo Lake.

Ducks, herons, and the occasional squirt greeted the sailors with every stroke of the paddle, all while the noon-time sun created ideal temperatures well complimented with a brisk breeze. New angles of filmography, as well as the proximity to water created a new environment for the lake that we appreciated.

But our appreciation for the lake’s waters became more personal. LEAP ambassadors took advantage of the situation by taking a swim in the lake, begrudgingly of course. After a brief miscalculation, Ryan, Makayla, and Christina capsized on the canoe. All three were launched off their boat and were rescued by fishermen moments later. The brisk water turned frigid, but luckily it did not take away from the experience, and, as a result, the event will be remembered by all members for some-time to come. 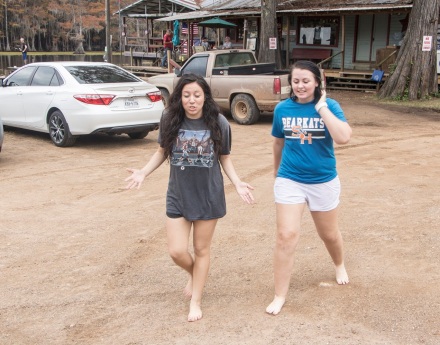 The Last Tour, By Makayla Mason

After I washed up at the hotel (and made sure I had not welcomed any uninvited lake creature) we grabbed a quick lunch at Central Perks before heading off to our last Caddo Lake tour.

As we made our way to our final boat tour of Caddo Lake, we were a little sad that it was coming to an end. 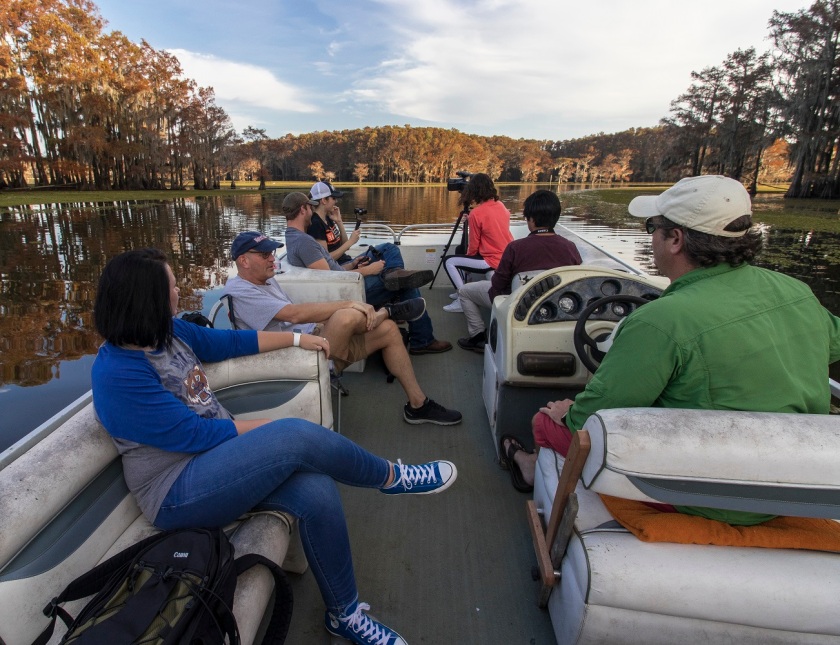 We met our tour guide for the night, Aaron, and prepared for a great sunset. 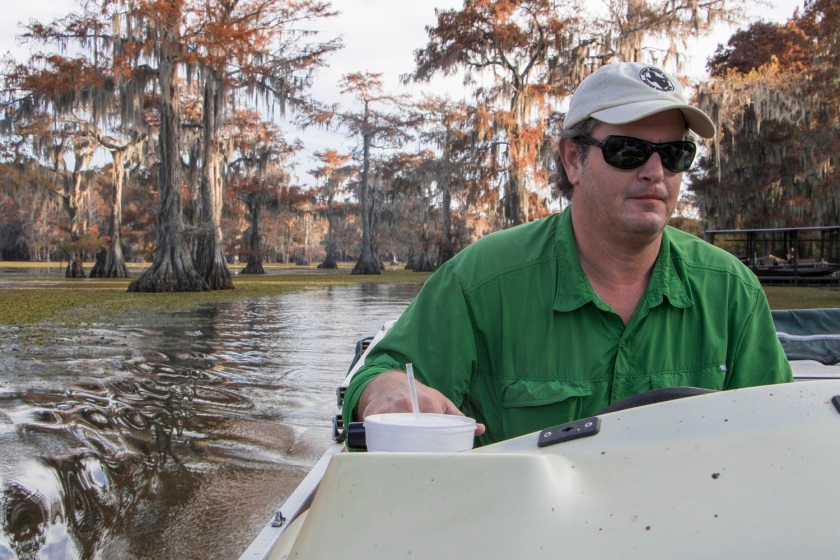 The weather was perfect and with just a few clouds in the sky, there was a sunset glow on the autumn leaves. 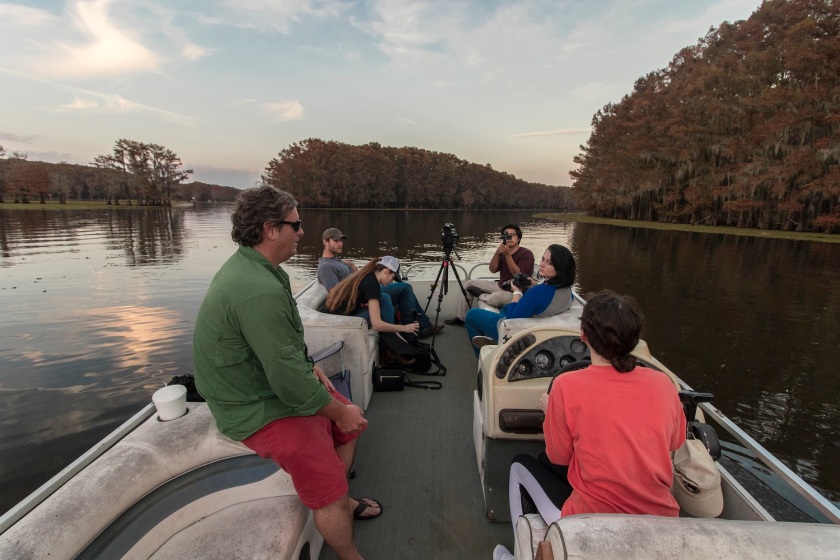 We were able to see parts of the lake we had not seen previously and took as many videos and pictures as we could. 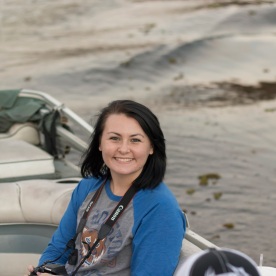 Aaron even took us to see Don Henley’s house!

Legend has it, that this Eagles rock star wrote the lyrics to “The End of Innocence” along the banks of Caddo Lake. 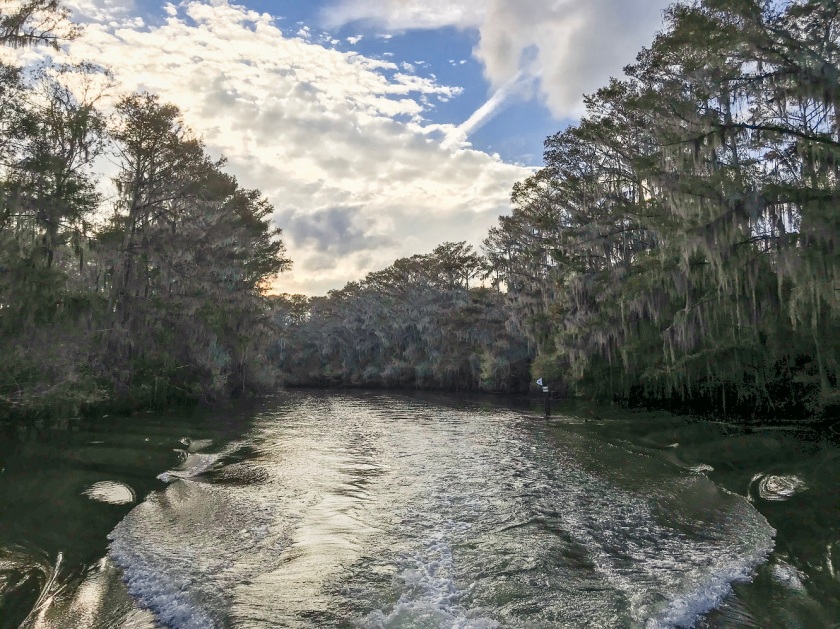 As we pulled into the dock the cotton candy sky waved goodbye to us and we left Caddo Lake with an abundance of memories. 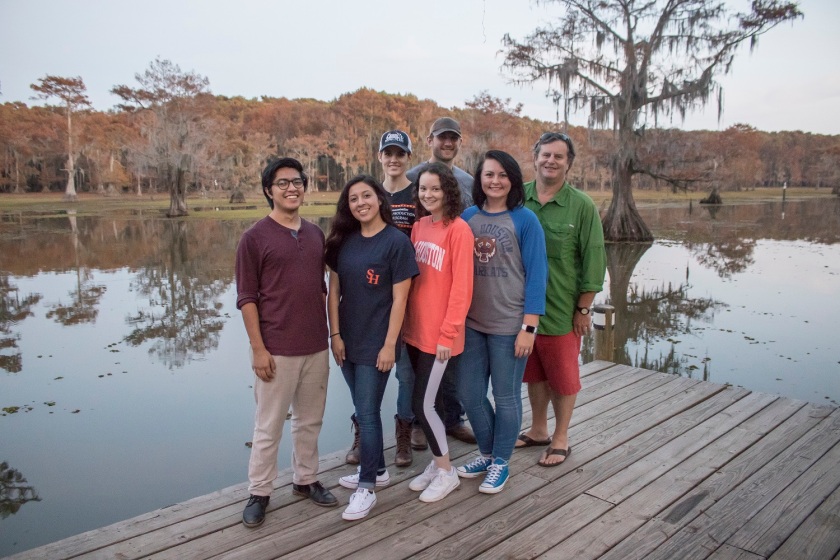 Before heading back to the hotel, we stopped to have dinner at our now favorite Marshall pizza joint, Pazzeria by Pietro’s. This was our third time at Pietro’s pizzeria but we were not complaining.

Brian was excited to try another tasty pizza from the interesting menu! He had already tried the Philly Connection, a philly-cheese-steak-style pizza, the night before so today he decided on the Hawaiian Luau. Makayla on the other hand tried their meatballs with cheese sprinkled on top. After dinner, we each had dessert. Sarah and Sierra tried their famous cheesecake while I had the vanilla bean gelato.

With a satisfied sweet tooth, we left feeling sad that our Caddo Lake adventure was now over. Throughout the weekend we have learned much about photography from the experienced Mark Burns and are ready to use our skills in the future. Furthermore, we are closer at completing our documentary. Perhaps, as the autumn leaves of the Caddo cypress completely fall and give way to a green-filled swamp, our project will be complete and ready for viewing.

One thought on “Beneath the Deep Blue Sky of Caddo Lake”