After spending a restful night in Grand Canyon Village, we packed up and headed to the Grand Canyon excited for what awaited us. For Brian and Christina, this would be their first time to see the picturesque views.

Our morning began with a not-so-early start because of a large amount of snow that fell the night before. When we finally did get on the road, it was a short drive from the hotel to the park entrance. We stopped shortly after getting inside of the park to take a photograph in the snow-covered woods.

We mapped out our route and stops along the way, but when we tried to go to the west side of the south rim, the road was closed. Since the park services are not allowed to salt the roads, there were large amounts of black ice on the way. We decided to switch routes and drive towards the other side of the south rim. Our first stop at the canyon was Yavapai Point. We had a perfectly clear view of about ten feet in front of us before a wall of fog blocked everything else out in the canyon. 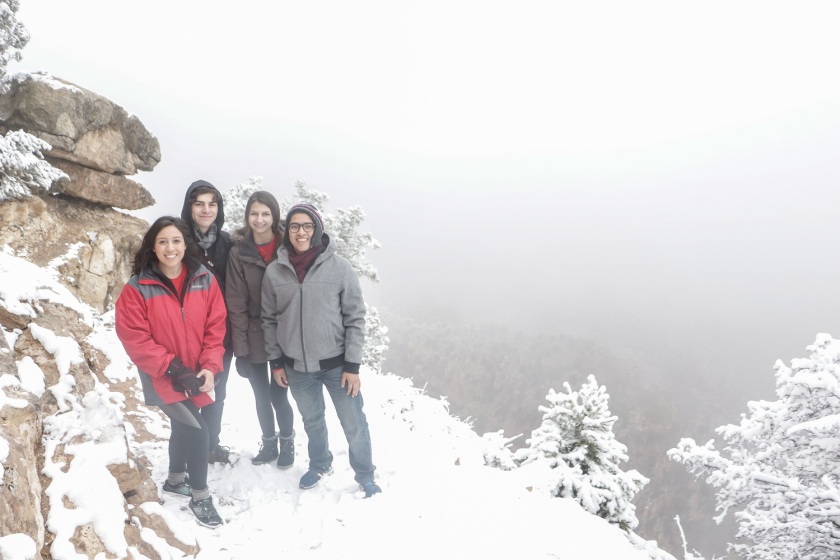 This didn’t stop us from exploring, but there wasn’t much we could see!

Fortunately, we could see far enough in front of us to hike safely, and occasionally a glimpse of the canyon below would come through.

Besdes this was the first snow Christina and Brian had ever been in (not counting Huntsville snow), and the explorations were beautiful and a thing of fun.

Although, this being their first snow, there were also complaints that snow was really cold.

So….we decided to check in to the heated Visitors Center, where we learned about the rock formations and layers of the canyon and got a photo that didn’t involve physical discomfort.

But we would not be deterred!

We continued working our way east, stopping at several points on the way to the Desert View Watchtower. The first few lookouts were so foggy that we could not see the Grand Canyon at all. Thankfully, the fog began to thin and broke clear when we reached Moran Point, which was nice for us, because we have seen many of Moran’s paintings over the years in our travels.  The views were breathtaking and stunning just like Thomas Moran’s paintings are.

We thought the lookout was perfectly named and we were thankful to finally see a sweeping view of the Grand Canyon. At Moran point, we climbed around and explored the area while photographing the canyon…. 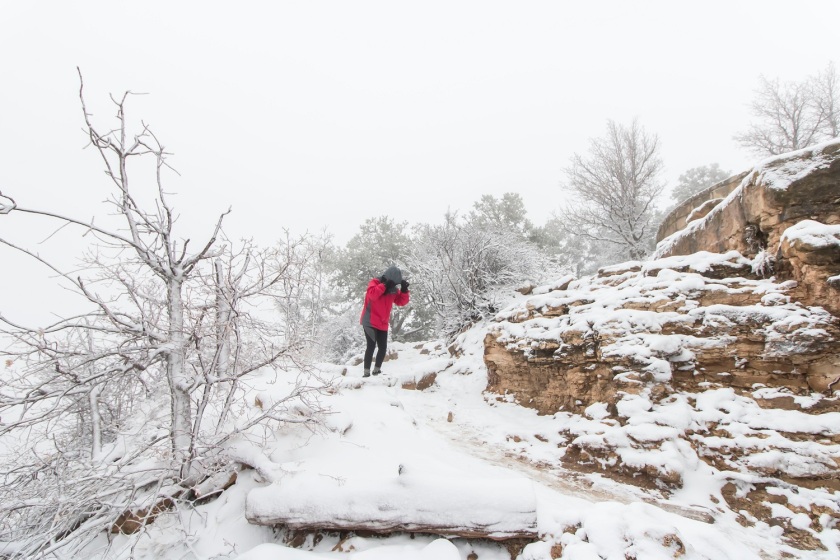 …and enjoying our time together. 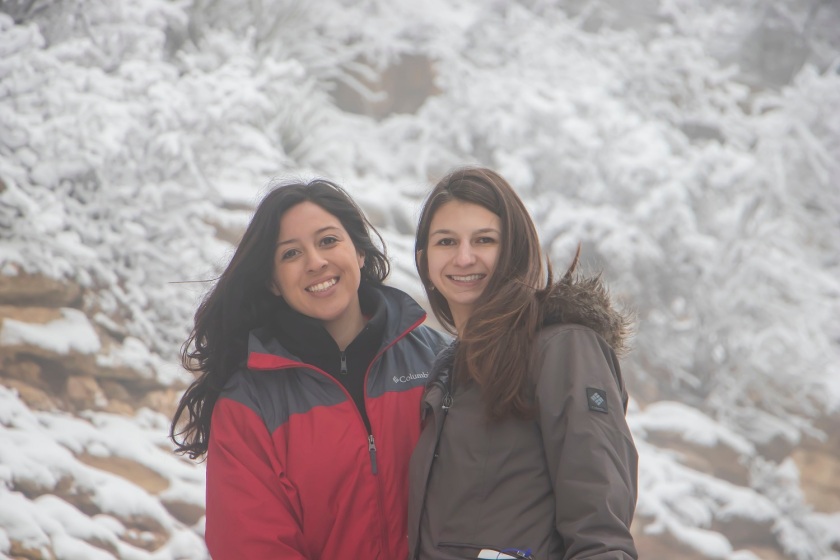 When we could reach vantage points that allowed us to see through the fog, the views were breathtaking.

When we reached the Desert View Watchtower…

…the fog had faded and we admired the gorgeous view. The watchtower was a neat stopping point where you could see farther out into the park.

We took several group pictures at each of these stops throughout the canyon.

However, don’t let the smiles on our faces fool you.

The fog may have mostly lifted…

…but it was still enormously cold.

With near freezing temperatures and wind whipping our hair, we scrambled back to the car after finishing each lookout point.

After visiting the Grand Canyon, our plan was to drive to Utah, but in true LEAP fashion we made a couple of stops along the way. Our first stop was lunch at the Cameron Trading Post in Arizona. Run by the Navajo tribe, the Cameron Trading Post included a restaurant, handmade trinkets, art, and much more. We enjoyed Native American cuisine for the first time. Brian tried the green chile stew and Professor Yawn ordered the Navajo Taco. Inexplicably, the girls ordered “Navajo French Dip” sandwiches with french fries.

As we enjoyed our meals we admired the decorative rugs on the wall and the unique aspects of the restaurant. After lunch we wandered through the store and browsed through the many handmade crafts, souvenirs, and locally made jewelry. It was a nice stop along the way as we began our drive to Utah.

Continuing our journey, we took an unexpected stop at the Navajo National Monument to break up the monotonous drive and to explore other cultures.  The monument is located in the North West portion of the Navajo Nation territory. The monument was marked to help preserve cliff dwellings of the Ancient Puebloan people.

We hiked half a mile down the trail to take a few pictures and see the remarkable dwellings in the distance.

The unplanned excursion was a welcome break from our lengthy road trip of the day. As the day neared end, we drove past the “Welcome to Utah” sign and reminisced on all of the beautiful views that we experienced in one day.