We started the day by grabbing brunch at a small grab-and-go type place called “Fresh Leaf” next door to our hotel. The store had many options including smoothies, bagels and cream cheese, plenty of juices, coffees, and other drinks. Sawyer and Victoria had the avocado toast;

Francisco had the chicken ranchero wrap;

and Makayla had the grilled shrimp wrap.

It was a great place for a quick bite, and with all the yummy dessert options, we knew we would be back for a snack or two. At the time, however, we were eager to add another famous NY landmark to our list: “The Met.”

The Metropolitan Museum of Art

As we approached the building on the outskirts of Central Park, it looked more to us like a palace than a museum. The Metropolitan Museum of Art is comprised of three floors and a basement that is home to pieces of art from across the globe, spanning more than 5,000 years. The day was cold and misty, and many others had decided to seek refuge in the warm halls of the sprawling great stone building. We checked in our coats and pulled out our maps to determine where to explore first.

Given the museum’s monumental size, we quickly realized we would have to narrow down what we wanted to see. We settled on exploring the Modern Art wing and the Epic Abstraction exhibit. In those, we saw works by some of our favorite artists: Alexander Calder, including a “traditional” Calder… 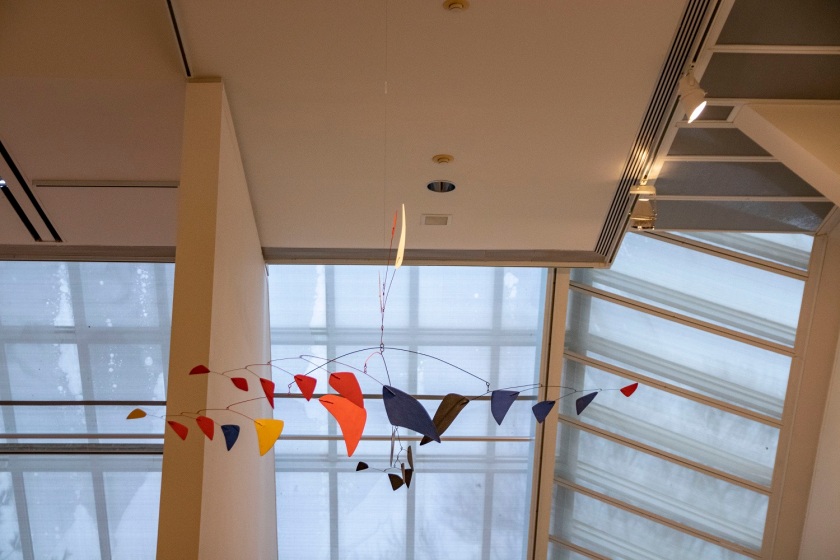 …and one we were less familiar with… 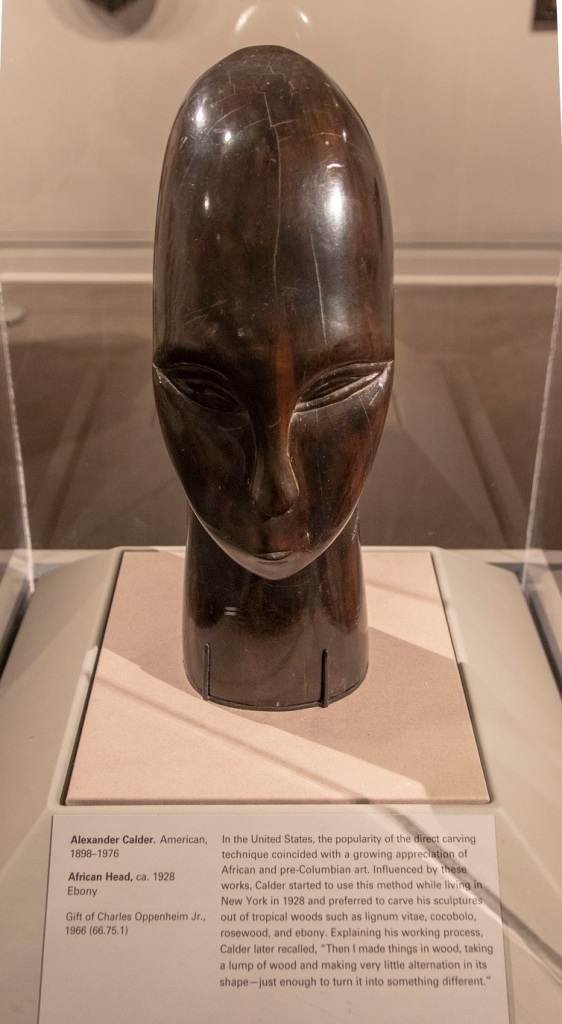 ….Georgia O’Keeffe, again, one of her more traditional pieces….

…and a style and subject with which we were less familiar… 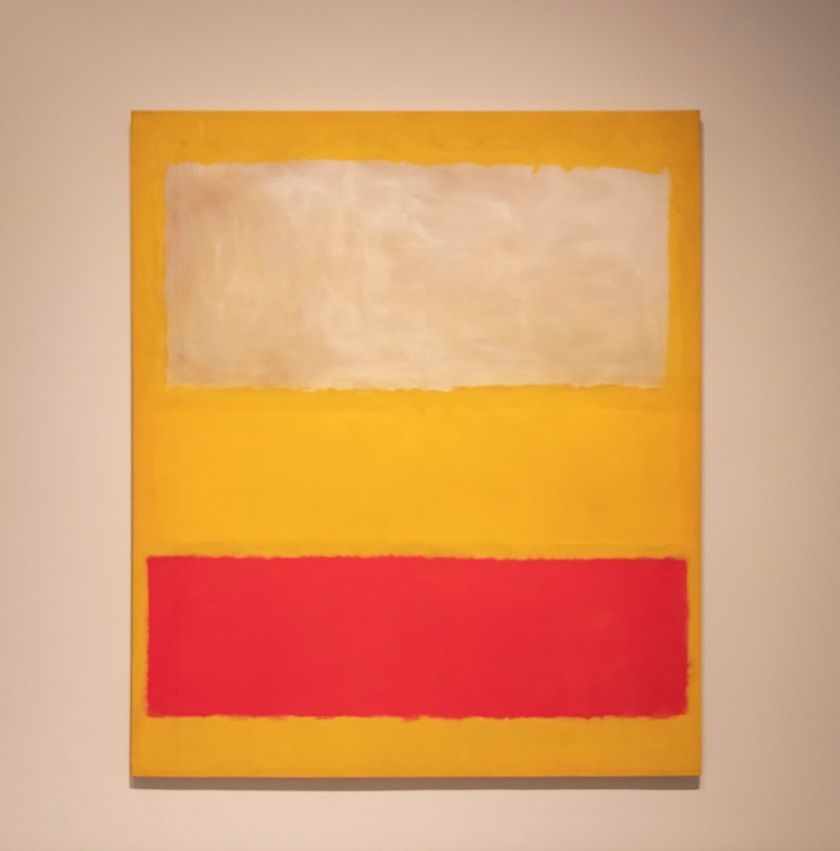 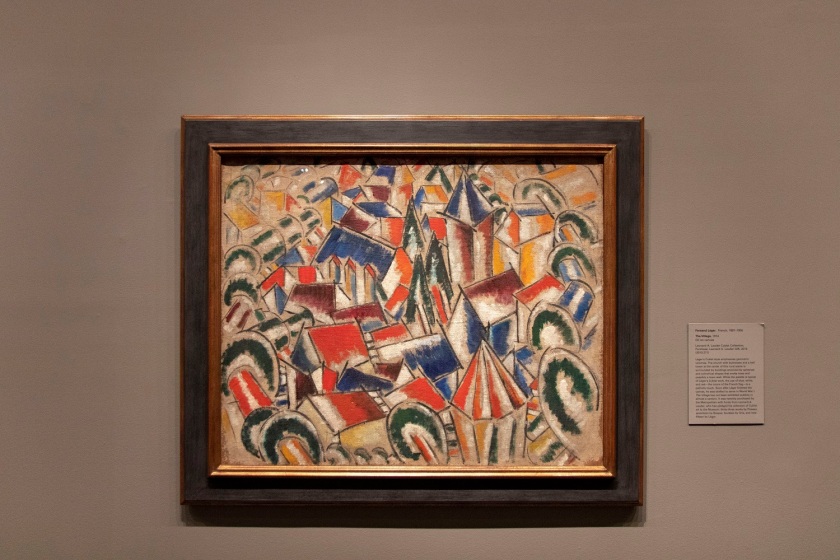 We also came across a room-sized mural by Thomas Hart Benton depicting the many different regions and periods of America.

As with the MOMA, we were blown away by the masterpieces in the collection.  In addition to the master works cited above, there was a large impressionism collection… 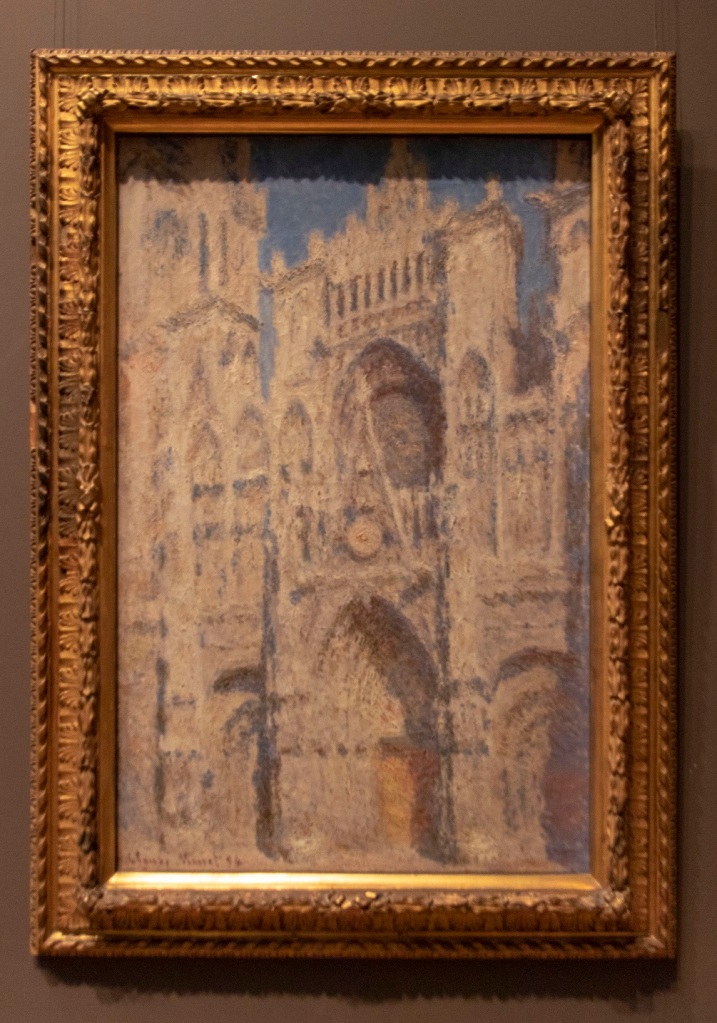 …post-impressionists such as Henri Rousseau…

….a couple of minimalists thrown in for good measure…

One of the most interesting pieces, however, was “The House of Ms. N,” by Louise Nevelson.  One of Stephanie’s favorite artists, Nevelson assembles large pieces from found objects, often creating enigmatic panel sculptures.  We have seen her work in dozens of museums, but this was by far the largest, large enough to be a small home. 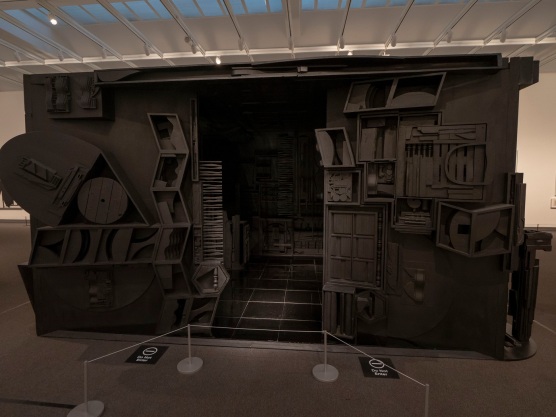 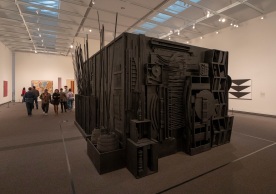 After exploring the Modern Art wing and Epic Abstraction exhibit, we explored on our own. Sawyer and Francisco checked out the Asian Wing, while Makayla and Victoria visited the art of Ancient Egypt.

Afterwards, we collected our coats and scarves and headed back out into the cold mist…

….to our next stop which was right down the street: “The Guggenheim.”

Designed by Frank Lloyd Wright in 1959, the Solomon R. Guggenheim Museum stands out monumentally from both Central Park and The Metropolitan Museum of Art. The iconic all-white spiraled edifice is one of five Guggenheim museums. 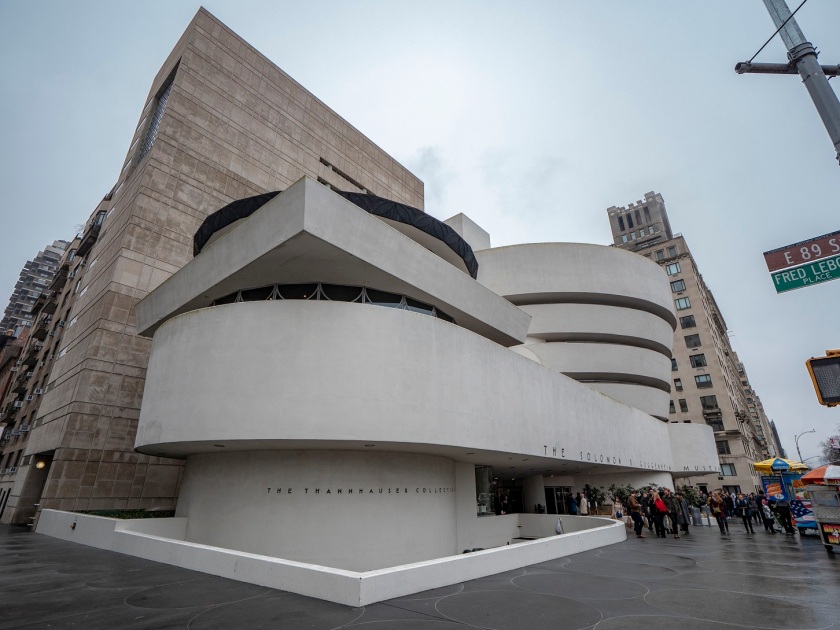 The purpose of the New York museum’s design was to keep people moving while looking at the art. There is one grand ramp sprawling up along the wall allowing for enthusiasts to see new pieces as they escalate toward the top level. A variety of art genres are represented, including Minimalism, Post-Modernism, and Expressionism, and the building is a work of art itself. Unfortunately, however, the outside was all we got to see—that, and the line extended around the building.

Without enough time to properly devote to such a marvel, we took in the view of the spectacular monument one last time and crossed the street to Central Park.

Even with all our expectations and all our research on possible Central Park sites to see, every one of us were awestruck at Frederick Law Olmsted-designed park. The entrance led straight to the outer walking trails with a fence surrounding the Jacqueline Kennedy Onassis Reservoir. 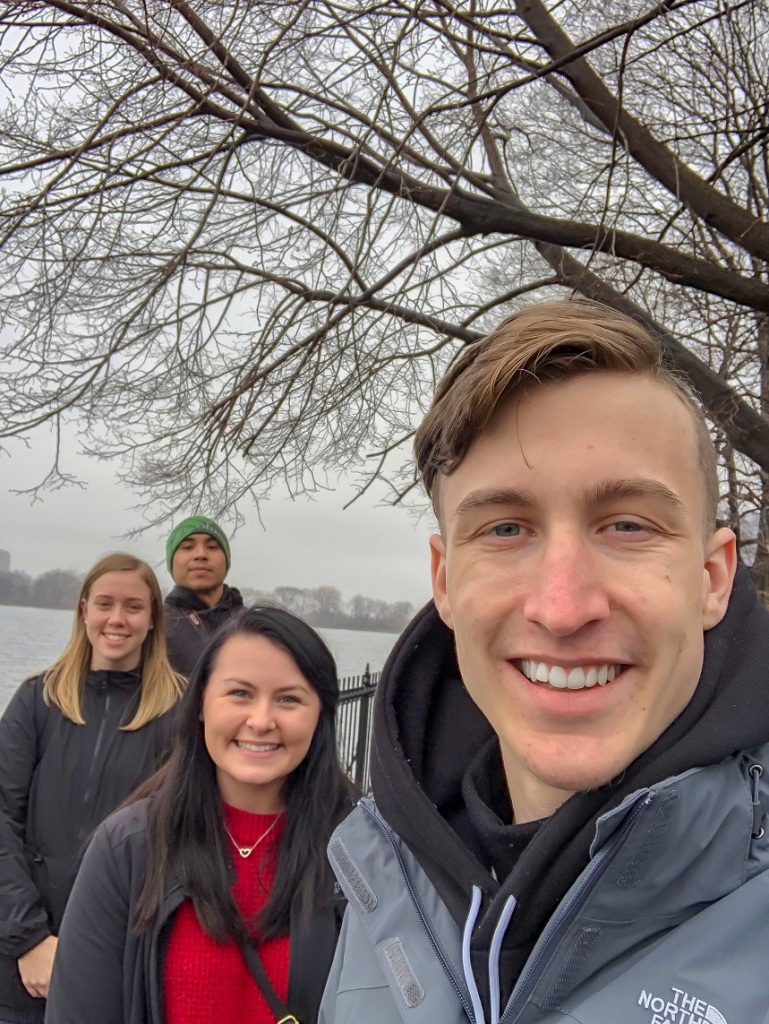 Our view was spectacular, even on a cold, misty afternoon. It was incredibly refreshing seeing trees and hills spanning over the horizon whilst in the middle of a big city.

We wished and wanted to stay longer, but we had a musical to catch!

As the sun settled, disappearing through the city’s soaring skyscrapers, nighttime awoke the people of the Big Apple as they roamed the streets in search of the best shops, dining, and, of course, entertainment. We headed to CHICAGO (the longest-running American musical in Broadway history) at Ambassador Theatre, between Broadway and 8th Avenue in Midtown Manhattan.

Ambassador Theatre is one of four constructed post-World War I in 1921 by the Shubert family. The line to the box office wrapped around the building and extended half a block more when we arrived. 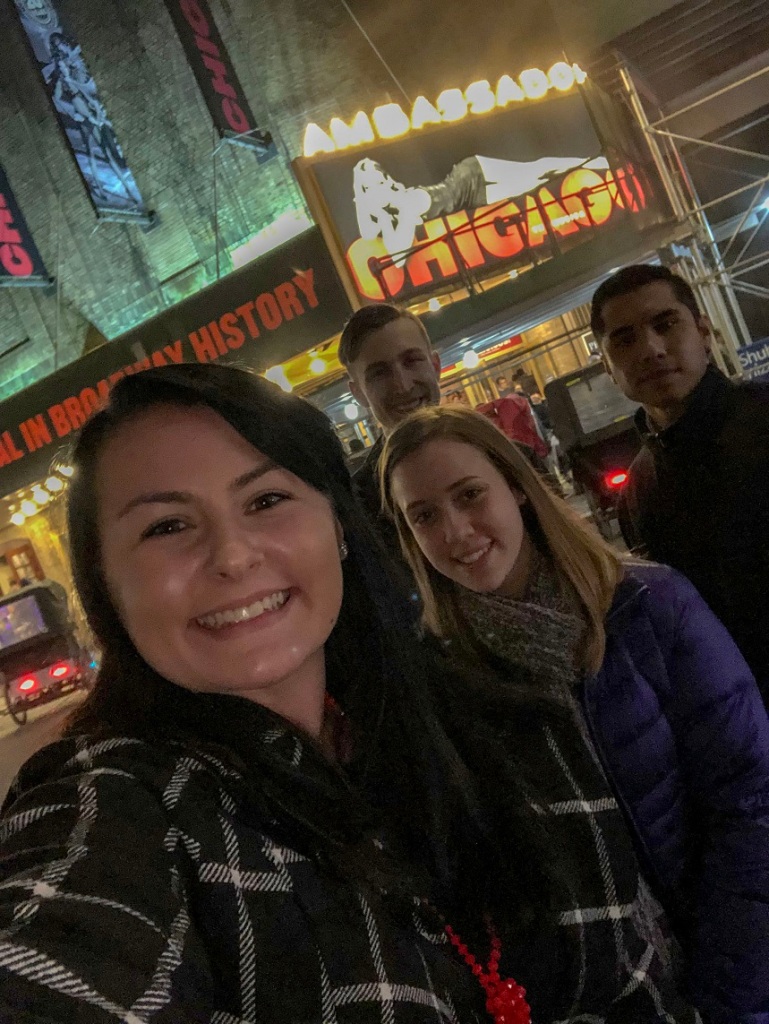 We picked up our tickets and took our seats.

The rest of the audience members quickly searched for their seats and purchased refreshments to be enjoyed throughout the show.

CHICAGO takes place in the late 1920s in (of course!) Chicago, Illinois. Roxie Hart kills her lover as a career move to gain publicity. Her lawyer, Billy Flynn, strives through the duration of the play to get Roxy’s case on the front page of the newspapers for personal gain. The choreography, lighting, and jazz music were well synchronized for “razzle-dazzle” entertainment.

Some of our favorite musical numbers were “Roxie” in Act I, when she becomes a popular celebrity in Chicago and “Hot Honey Rag” in Act II, when she partners up with Velma, another performing jailbird in search of stardom.

This was our first Broadway musical and we will remember it for many years to come.

After the play, we walked a couple of blocks to the restaurant Joe Allen. The lighting was dim with small candles on each table and the walls were lined with unfamiliar play posters. Under closer inspection, we discovered that they were plays that were considered flops or unsuccessful.

The menu consisted of many southern options which, as southerners in New York City, we were interested to try. Victoria ordered shrimp and grits;

After an amazing play and good food, we took a subway back to our hotel. It was a great way to spend our last night in The City That Never Sleeps!