Today is what is known as a “travel day” in LEAP circles, but that does not mean we spend the day exclusively in the car.  We’ll make the most of our day–beginning with a trip to Cafe Du Monde.

We ventured to the French Market one last time for the well known and loved Cafe Du Monde. Cafe Du Monde opened in 1862 and has been serving coffee and beignets to the residents of New Orleans and all who travel there. It’s a very popular destination!

When we arrived, we were greeted by two long lines. Luckily for us, we stood in the shorter of the two for to-go orders. Cafe Du Monde serves hundreds of cups of their coffee – made with chicory. The origin of coffee with chicory stems from France and was introduced in New Orleans in the Civil War when the ports were blocked off by the Union. New Orleans then turned to chicory because of its similar flavor to coffee in order to stretch their coffee supply. Today, visitors can enjoy several variations of the coffee: Au Lait (steamed with half and half with milk), iced (Maggie and Makaylas favorite), or traditional.  What people seem to love the absolute most is the beignets. Cafe Du Monde’s beignets are a thick French doughnuts sprinkled with generous amounts of powdered sugar. We tried our best to keep the powdered sugar in the bag and not all over ourselves and the van as we headed to see the Sculpture Garden before saying goodbye to New Orleans.

After finishing our coffee and beignets, we visited the Sydney and Walda Besthoff Sculpture Garden at The New Orleans Museum of Art. The sculpture garden is located in the 1,300 acre City Park and houses over 90 sculptures. There are several entrances to the garden, and we entered near the beautiful Deborah Butterfield horse sculpture.

Her fame as an artist derives from her sculptures of horses. While her horses appear to be made from wood, they are often made of other metals (in the photo above, the horse is made of bronze, meticulously crafted to give the appearance of wood grain).  I have seen her work previously in Denver and Phoenix (on LEAP trips), and I always enjoy them.

There were several more notable sculptures in the garden, including those done by notable artists whose work we are now beginning to recognize:  Claes Oldenburg and Joel Shapiro… 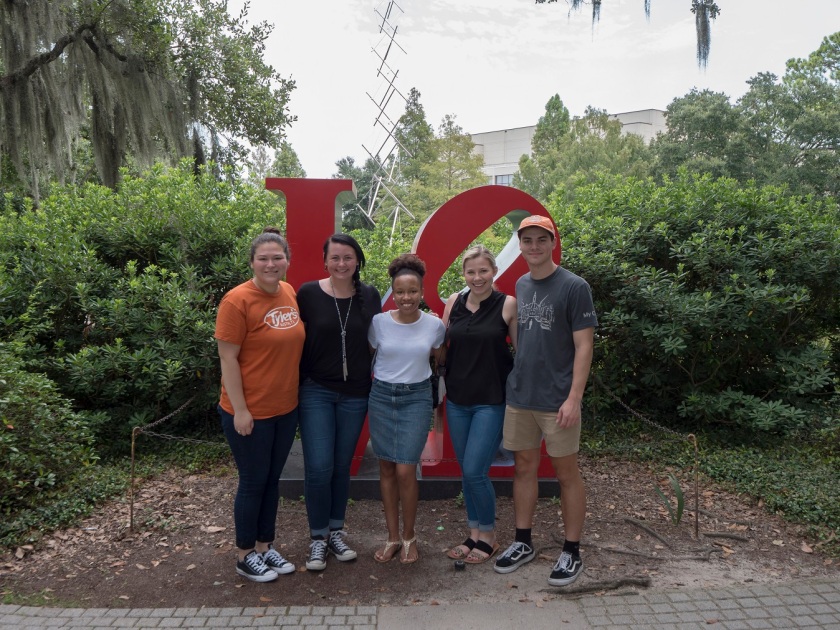 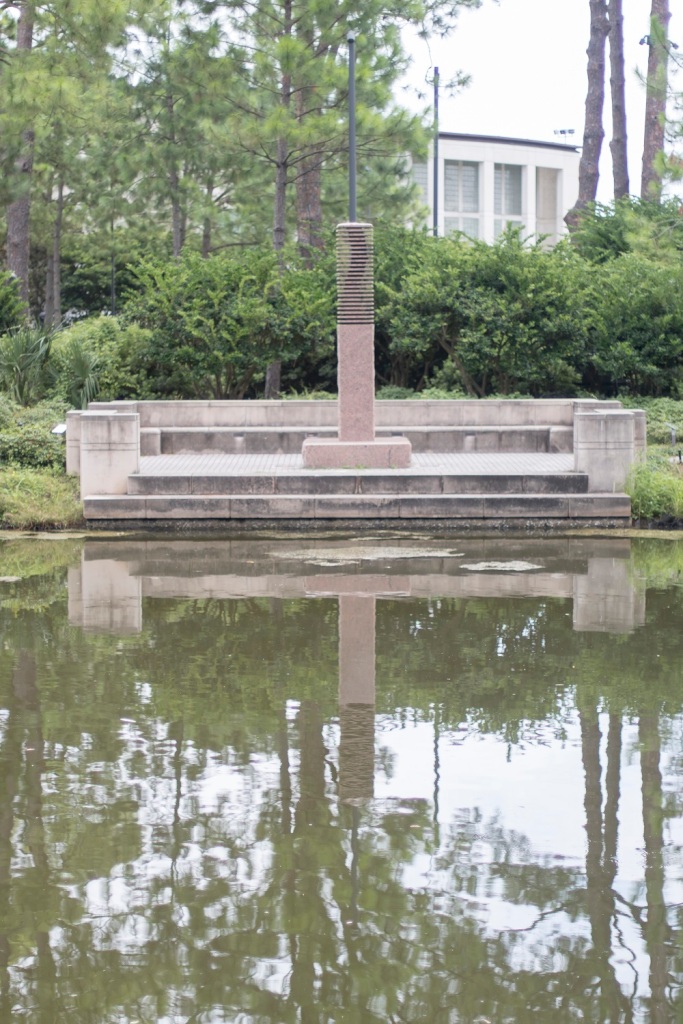 We came across one of Professor Yawn’s favorite pieces, Monkeys by Rona Pondick, which is quite strange.

I also saw a Louise Bourgeois “Spider,” for the first time.

The Sculpture Garden is open year-round with free admission, and I hope to eventually return to New Orleans and further explore the City Park and sculpture garden!

Just like that, we were out of New Orleans headed to Baton Rouge! 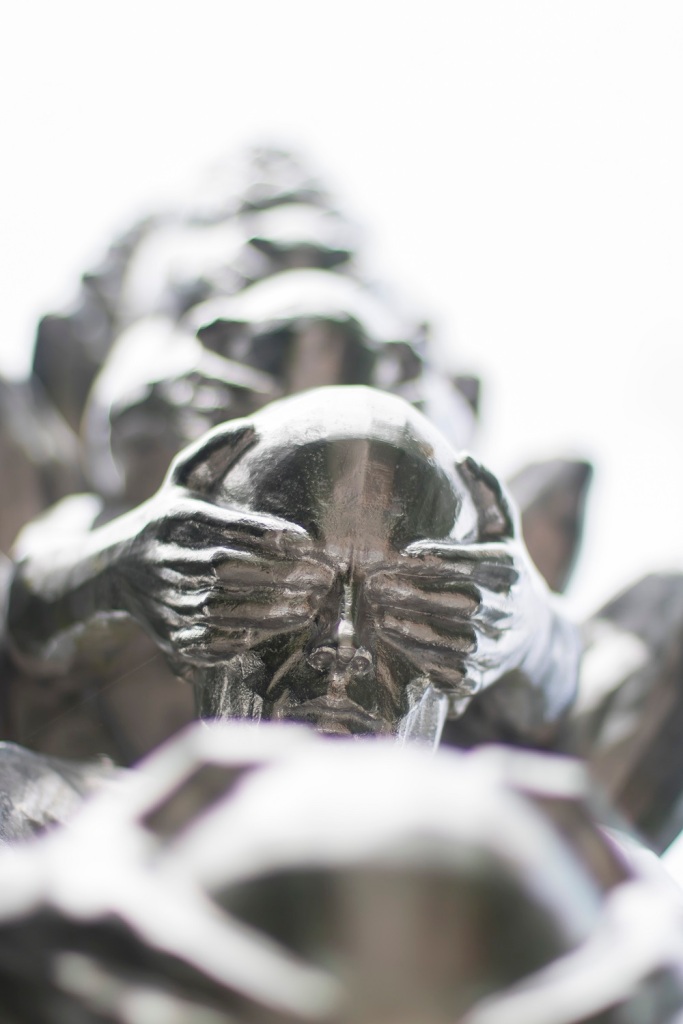 Towering 450 feet high with 34 floors, the Louisiana State Capitol building in Baton Rouge is the tallest capitol building in the United States. The building was commissioned by Governor Huey P. Long in 1931, costing $5 million and it took only 14 months to complete.  With its towering structure and an intriguing sky, we experimented with moody black-and-white photos. 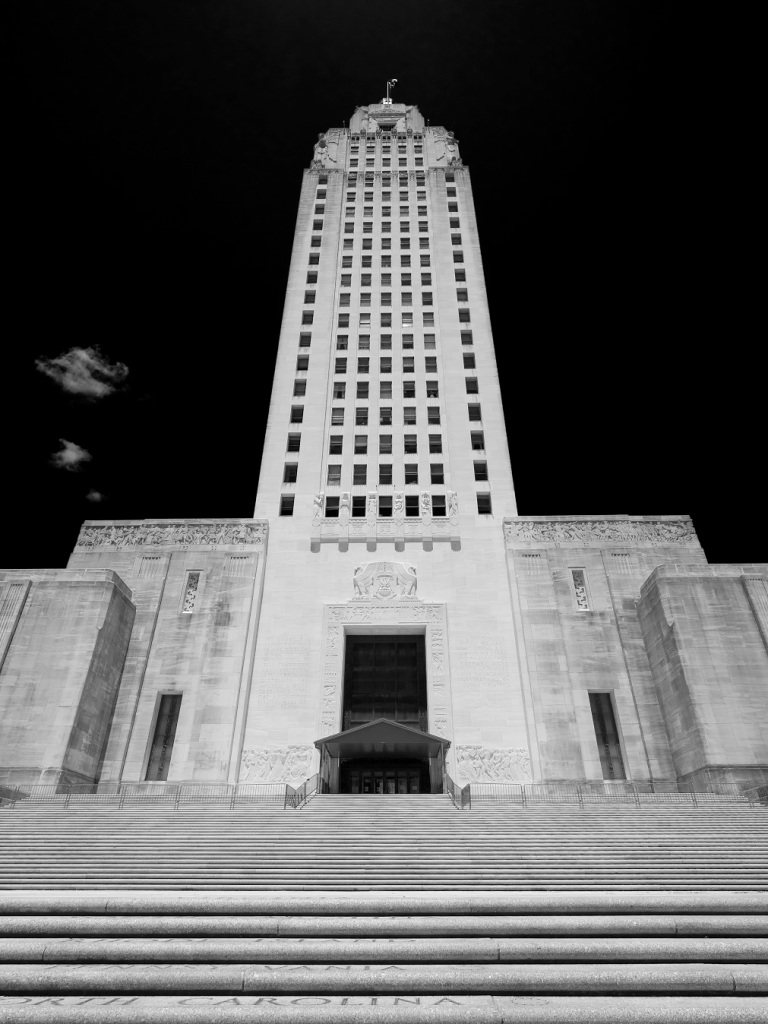 The structure was crafted with an eye toward symbolic meaning.  For example, there are 49 steps that lead to the entrance of the capitol. The original 13 colonies were designated by stars while the other states were marked with the year they became a part of the U.S.

When they built this capitol, there were only 48 states in the U.S., but they added a step just in case we got another state. In 1959, Alaska and Hawaii joined the United States, so they share the last step before entering the building.

Most capitol buildings have rotundas, but the Louisiana State Capitol is one of nine without domes and one of four in the design of a skyscraper.  Because it has no ceiling dome, there is no circular floor, hence no rotunda.  They do offer, however, a circular (bronze) map of the state, one designed by Sois Seiferth and weighing almost 4,000 pounds.

Additionally, we learned about the First African American Governor in the United States: P.B.S Pinchback. Pinchback was the 24th governor of Louisiana, serving from December 9, 1872 to January 13, 1873. Pinchback also took part in challenging Louisiana’s “separate car law,” a challenge made famous by Homer Plessy in 1896. 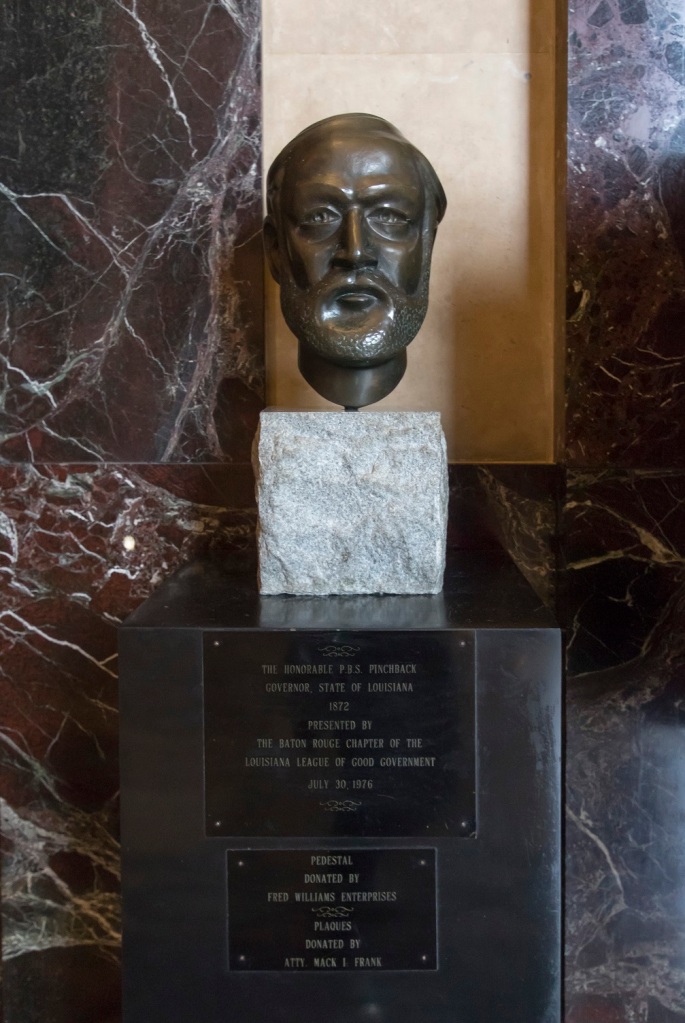 On the same floor, to the left was the House Chamber and to the right was the Senate Chamber.

We then made our way to the exact location of an assassination inside the capitol building. On September 9, 1935, Huey Long was assassinated in the hallway. There was even a bullet hole from the event still in the marble! 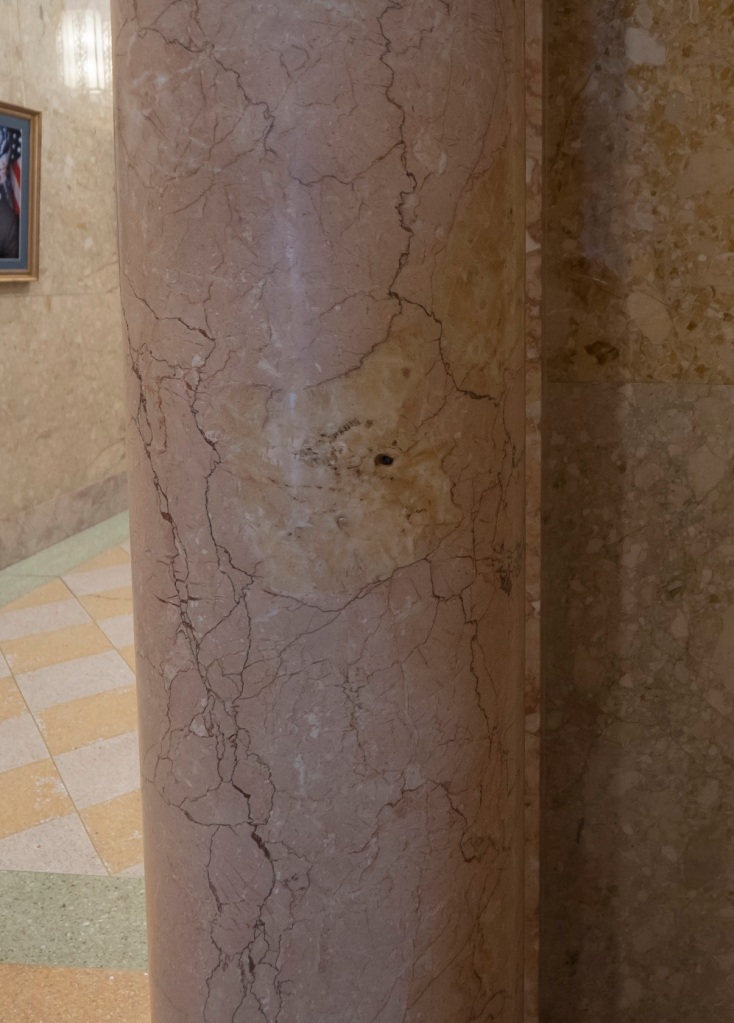 Long is now buried on the grounds in front of the capitol building. His grave lies at the center of the park designated by a monument in his honor.

We could walk in a complete circle around the top of the building to see all of Baton Rouge’s angles.

State capitol buildings are always a favorite stop for LEAP.

It’s always interesting to compare buildings and learn about the history behind each state. We really enjoyed this capitol and were glad we could stop and tour it on our way home. Sadly, this was our last stop in the Bayou State. Up next, home sweet home!