LEAP Students had the pleasure of dining at Chama Gaucha with the great staff at the World Affairs Council Houston and Consul General of Brazil: José Borges dos Santos Júnior.

Before we commenced with our feast, Mr. Borges gave a presentation of an amazing opportunity to travel to his home country of Brazil.

Additionally, they will experience the local food, culture, and architecture that is special to Brazil. Also, they will even have the chance to experience one of the seven wonders of the world: Christ the Redeemer. Of the many questions that were asked, most involved the aspect of the safety in both Brasilia and Rio de Janeiro. Mr. Borges realizes that it can be overwhelming to travel to another country, but the key tip is “do not do what you would not do in your home country”–sensible advice, and very similar to our guideline when LEAP travels to other cities.

Others had questions that relate to the traditions unique to Brazil. Because of Brazil’s long history of slavery (Brazil imported more African slaves than any other country and 40 percent of all slaves brought to the Americas),  many traditions in the country trace back to Africa. For example, on New Year’s Day, it is traditional to offer gifts to Yemanja who is the Candomblé goddess of the sea. She is said to protect sailors, sea catches, womanhood, and children. Many people across Brazil dress in all white and offer presents to Yemanja at the shores of the ocean. If your gift continues into the ocean, then you will be protected by Yemanja. However, if your gift returns to the shore, then you have been rejected!

Finally, we began our taste of Brazil! We started with the salad bar which had a variety of salads, meats, cheeses, soups, and more.

After we were done with the salad bar, we turned over our two sided card from red to green to signal that we were ready to be served their 12 various skewers of meat.  We were offered lamb, shrimp, pork and beef ribs, and their house specialty sirloin.

All of us came to a common consensus that the sirloin by far was the best cut of meat! Additionally, we were offered sides of garlic mashed potatoes, grilled bananas, black beans, and rice and a new soft drink!

After finishing our delicious dinner, we had the opportunity to introduce ourselves to Mr. Borges.

This was truly an incredible experience. We would like to thank the World Affairs Council of Houston for allowing the LEAP students to attend this event and we look forward to attending future events! 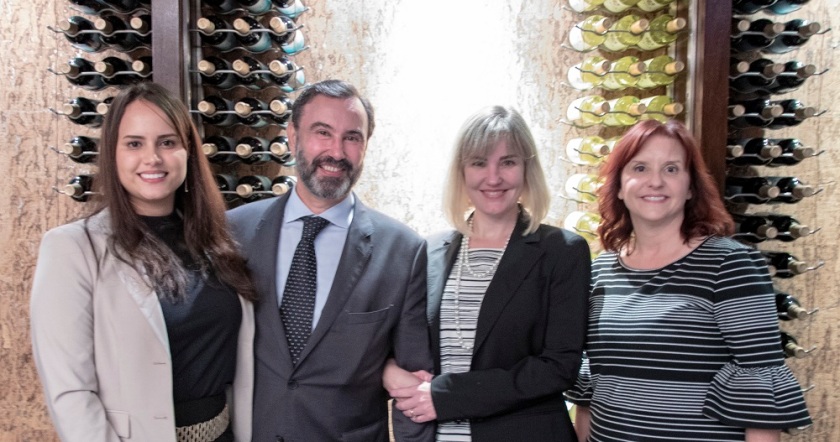