This past weekend, the LEAP Ambassadors and Erin Juarez showed their Bearkat spirit by volunteering at the tailgate for the College of Humanities and Social Sciences (CHSS) Tent with Mrs. Deanna Briones, CHSS Community Relations Coordinator. During the tailgate we handed out snacks and free t-shirts from the College, while also enjoying our time with students, alumni, and football fans!

Although we arrived an hour early, there were football fans (and swag fans) there even earlier. We held them off until the official tailgating kick-off time, however, fearing that we would run out of items (especially the ever-popular t-shirts) if we opened too early.

Once it was noon, there were hundreds of students with their families–it was family weekend–wandering around, going from tent to tent to snag up goodies.

When they saw that we were handing out t-shirts, people quickly lined up to get their shirts before we ran out. They came in big waves, and it was chaotic. Meanwhile, at our second tent, there was much less commotion. Apparently, not everyone is as excited about free snacks, especially since almost every tent gave away free snacks.

After an hour, we had run out of all sizes in shirts except for a few size smalls, but we soon handed them out to kids and other students who wanted one. The snacks consisted of chips, candy, and granola bars.

Mrs. Briones, encouraged us to walk around and see the tailgating action when there wasn’t a big wave of people. And, of course, that meant we could also collect some goodies for ourselves. There were so many options that we all had a little bit of everything, pizza, hamburgers, hotdogs, and more. We also got a look at all the spirit festivities of the day.

Yvette was also interviewed by students claiming to be affiliated with a radio station, or perhaps a podcast, it wasn’t entirely clear. Perhaps it was just a curious student, interested in others’ opinions. Yvette predicted a BearKat victory.

As it was nearing game time, the tailgate came to an end with a lively presentation from the marching band, cheerleaders, twirlers, and the orange pride dance team.

By the end of our tailgating day, we were encouraging people to take as much of the snacks as they wanted, and a few people obliged!

We were happy to see the snacks go to a good home, happy that people had fun, and happy to volunteer for the College of Humanities and Social Sciences–which has provided us with a great education and many opportunities.

We would like to thank Mrs. Deanna Briones for giving us the opportunity to help CHSS. And to end such an amazing day, the Bearkats played hard against Lamar’s Cardinals and won 41-7!

Judge McCaig was invited to the University to be presented with the Alumni Service Award during that evening’s Distinguished Alumni Gala. During the breakfast, he was joined by Dean of the College of Humanities and Social Sciences, Dr. Abbey Zink; Political Science Department Chair Dr. Tamara Waggener; 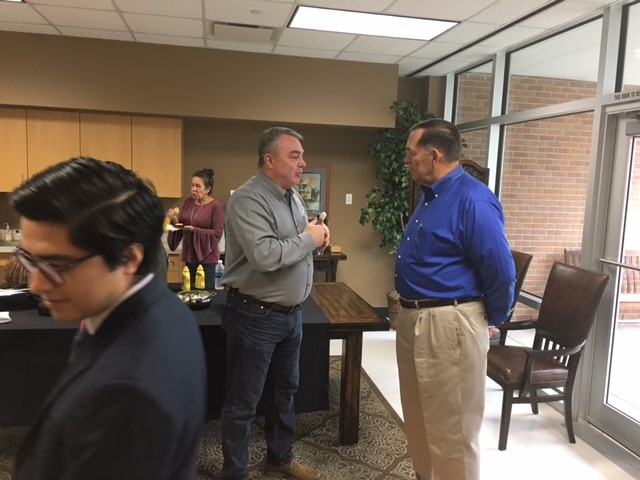 and others in the Holcombe Room. 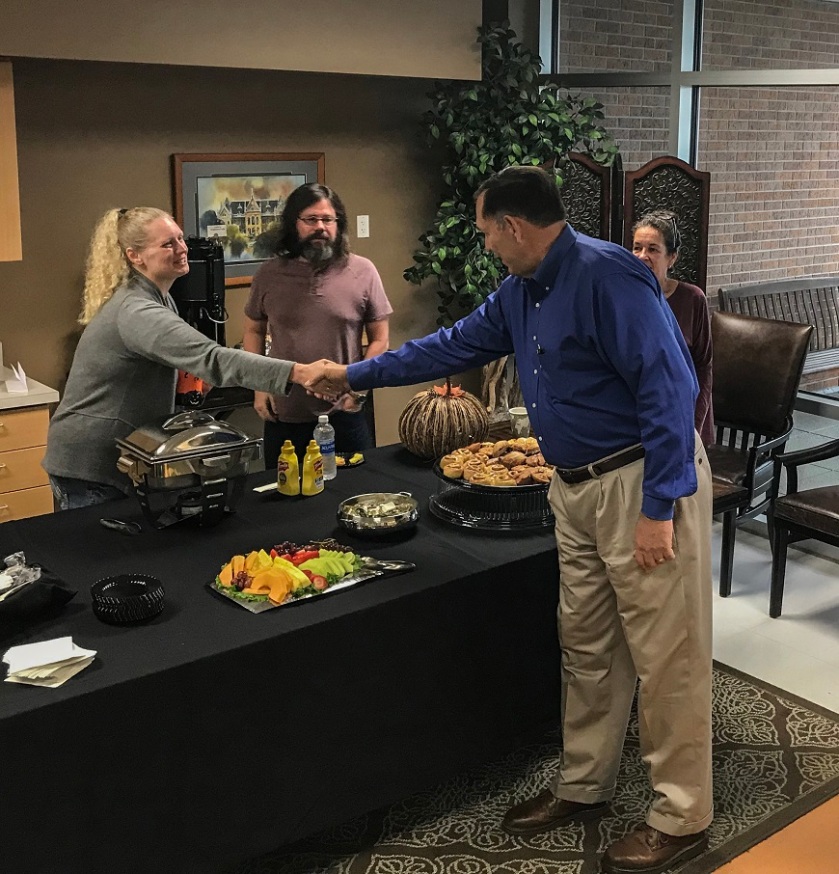 Judge McCaig graduated from Sam Houston in 1972 and has been heavily involved with the University ever since. The LEAP Ambassadors were able to learn about the inner workings of the court system from a judge’s perspective, and also the mindset required to do the job efficiently. One thing of interest to us was his ROTC background. During his involvement in ROTC, he distinguished himself by becoming essential to the creation of the SHSU Military Science Alumni Club. We also thought it was impressive how his involvement with ROTC has persisted, as he has donated generously to provide scholarships for Military Science majors.

Conversing with Judge McCaig before the ceremony was a unique experience that broadened the understanding of the intricacies involved with law. The event was a successful precursor to his award ceremony, and we thank him for his generosity towards Sam Houston.

The LEAP Ambassadors would like to thank Deanna Briones, Dean Abbey Zink, Kristin Trojacek, and Dr. Tamara Waggener for allowing us to participate in this event.

To kick off to the semester the LEAP Center opened up its doors to incoming freshman, transfer and current students to come by and see what LEAP is all about. With about roughly 70 students throughout the night, we enjoyed delicious ice cream, cookies, sweet tea, and the chance to see school friends again. 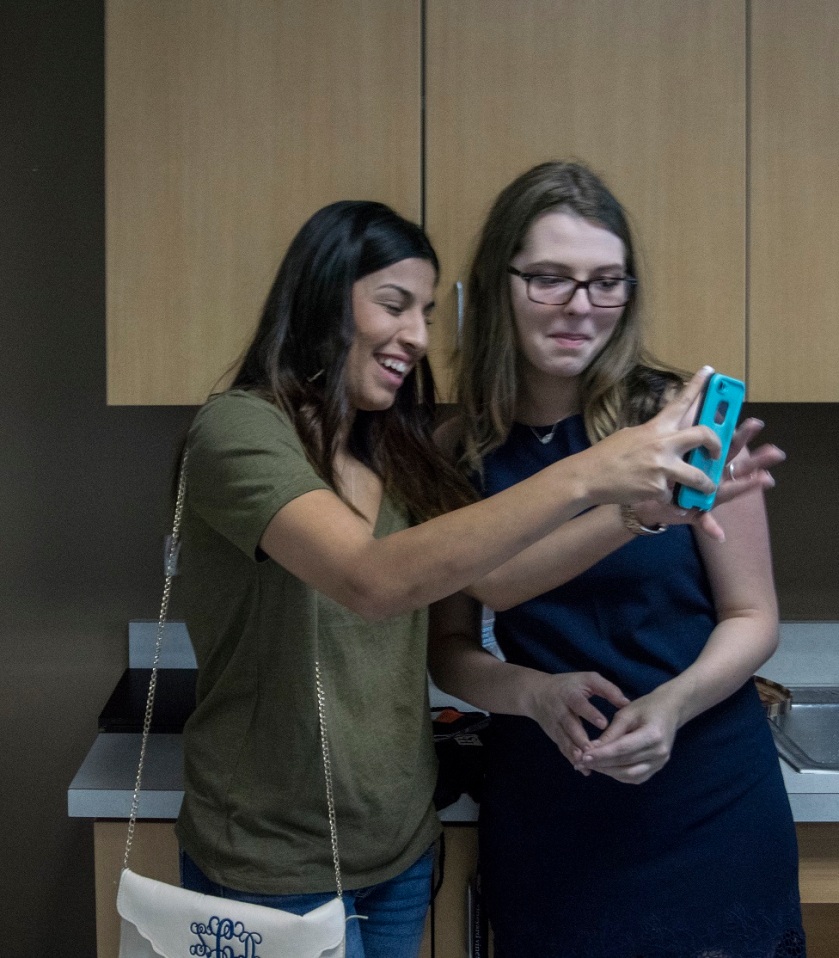 In preparation, we set up The Holcombe Room with decorations, a prize wheel…

…and, of course, ice cream and other snacks and refreshments.

As might be expected with free food on campus, there was a line awaiting the open of the event.  Later, we would have a packed house.

We were happy to note that, in addition to many students…

Although folks seemed to enjoy the prizes, the t-shirts were definitely the most wished for. But even after the prizes were gone, many of the students hung around, catching up on their summer activities and their plans for the fall.

We hope that some of those plans will involve LEAP Center events, the dates for which were provided at the ice-cream social.  For those of you who missed it, here’s a calendar for the next month or so: 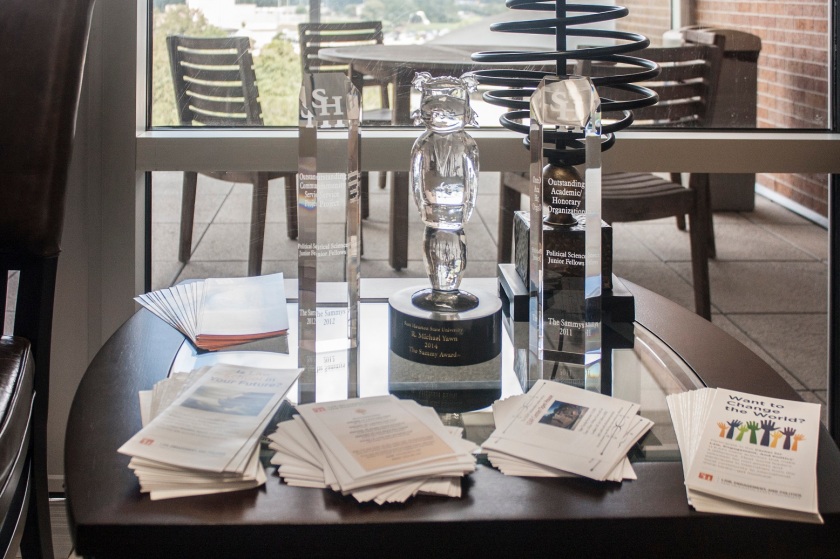