If there’s one thing we’ve learned about a pandemic, it’s that it hits every level of government.  So the Bush School at TAMU hosted experts on local government in the latest episode of “Uncorked:” Dr. Ann Bowman and Dr. Robert Greer.  As usual, the program was hosted by Justin Bullock and Dr. Gregory Gause. 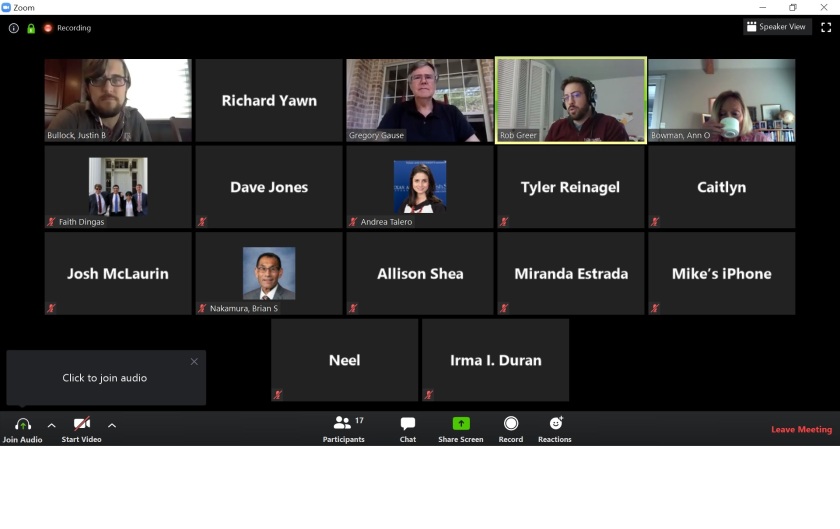 The panel got into more politics than usual this time, but they still managed an informative session, focusing on the impact of the COVID-19 pandemic on local and state governments.

As Dr. Greer noted, the pandemic has hit local and state governments in two ways: (1) rapidly rising costs, and (2) decreased revenues.  For states such as Texas–which, with no property or income tax, relies heavily on sales tax–the decline in revenue is especially severe.

When states and municipalities face challenges, the US economy faces challenges.  When there is a budget shortfall, states and localities layoff workers and, as Dr. Greer noted, about 13 percent of the US workforce is made up of state and local workers.

So, what can the federal government do?  All agreed that a unified, consistent message would be helpful.  They also seemed to agree that the CARES act, which provided assistance to local and state governments, as well as large and small businesses, was a step in the right direction.

Additional funds will be needed, and where that money goes and how it will be allocated were concerns.  Greer mentioned money to the unemployed–of whom there are now record numbers–is a good way to pump the economy.  With little or no income, these workers will spend the money they receive, which multiplies through the economy.

The panel also responded to audience questions, at least one of which asked about the food supply.  This was a particularly timely question, inasmuch as Tyson has had to shut down several plants owing to large numbers of employees falling prey to the COVID virus.  At this point, the meat supply to the nation has dropped precipitously: production of pork, beef, and chicken, has fallen 30 percent, 15 percent, and 10 percent, respectively.  While this shortfall has yet to hit the stores (because of existing stockpiles), it will hit soon.  Indeed, today, President Trump indicated he would invoke the Defense Protection Act and order those plants to remain operational.

While Trump’s decision was, obviously, a federal action, cities, counties, and states play a role, too.  Most of our food inspection, for example, is done at the local level and, of course, the labor pool comes from cities and counties across the country.  In the case of these meat plants, the labor pool comes often from small cities and counties, where the meat plant may be a primary employer.

This is a new angle to the COVID-19 pandemic, one not much covered by the national media but, arguably, more important than the topics that are often covered.  In short: it was another educational program hosted by the Bush School at TAMU.