With finals underway, our  numbers dwindle, but some hardy LEAP Ambassadors tuned in to the Bush School‘s/Scowcroft Institute’s weekly COVID-19 update, with this one focusing on the food supply chain.

Dr. Blackburn led off the show…

by introducing Brittany Segundo, a Fellow at the Scowcroft Institute specializing in supply chains (and a Ph.D. student studying engineering).   Segundo discussed meat products, and the spike in coronavirus illnesses among food workers.  This is largely a product of the lack of social distancing in the plants, but it’s also possible that the workers need the N95 Respirator masks instead of just the less stringent masks.

Segundo stressed that there really shouldn’t be a substantive shortage. Rather, we might see a bit of a bump in prices and less variety.  Some stores might put a limit on the number of, say, meat packages a customer can buy, but that’s not because of a shortage.  It’s more to prevent a run on meats, much as there was over purchasing of toilet paper early in the pandemic.

Another factor is that with the government shutdowns, the demand for many agricultural products has dropped, leading to reports of farmers ‘dumping’ some of the produce.  Some have asked, “Why can’t those food items be donated to non-profits and food banks?”  One of the reasons for this is that it costs a lot of money to re-distribute those items to new locations and, often, in new packaging.  Suppliers who are already losing money cannot readily incur additional costs associated with the logistics of donating to new venues.

Dr. Christine Blackburn then stepped in to discuss the effect of COVID-19 on high-value commodities0–fruit and vegetables and other items that are labor intensive to harvest.

One difficulty there is that the labor for these products often comes from international sources.  These workers are often either undocumented or require H2A visas, and, because of COVID-19, fewer of these visas were issued this year.  This has resulted in a reduction of labor.

Additionally, many of these workers live or work in tight spaces, making social distancing difficult.  This results in a higher rate of absenteeism, another factor impeding production and distribution. So, for consumers, we may see higher prices and more limited products, but the real impact will be on farmers and those who work for farmers, whose incomes are being affected.

Blackburn and Segundo then took questions.

One important question involved whether we are any closer to achieving “herd immunity”?  This is a difficult question, and according to Dr. Blackburn, we still don’t know if having the disease produces immunity. If it doesn’t, then we won’t achieve herd immunity.  If it does, the medical community will need to determine how long the immunity lasts.  Additionally, it’s possible that a certain amount of antibodies are needed to achieve immunity, and the tests may not be sufficiently sensitive to determine this.  Finally, there is the issue of false positives.  If the false positive rates are high, then you have people who think they are immune, but aren’t actually immune. That makes them more vulnerable for future infections.

The big question was: is this the right time for the shutdown to end?  Dr. Blackburn struggled with how to answer this, noting that the answer to this depends on factors relating to health, economics, and social aspects of our lives. She also mentioned that she has friends who are out of work, parents struggling with children at home, and she understand the impact of the shutdown. 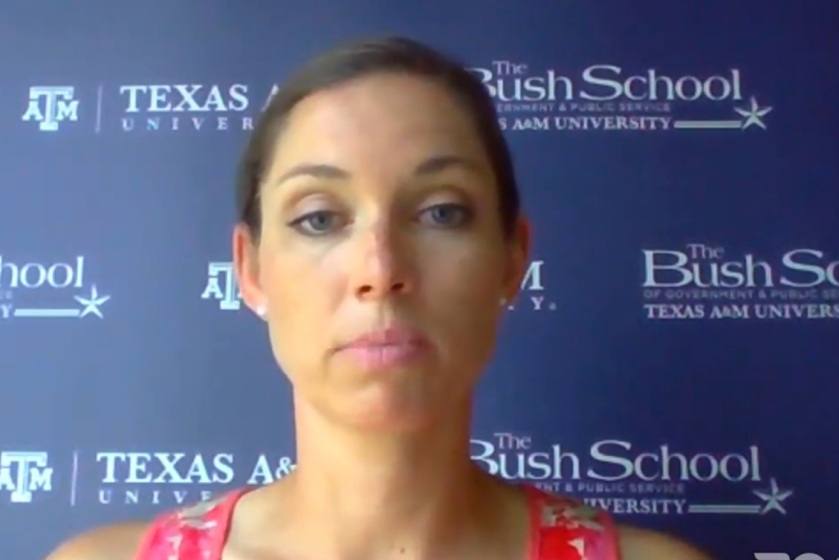 But looking at it from a health-only perspective–from a “disease-containment standpoint,” as she said it–“now is not the right time” to end the shutdown.  Blackburn noted that Texas has an increase in cases over the past two weeks, and she expects in 3-4 weeks, we’ll see much larger numbers of cases in Texas, and 3-4 weeks after that, we’ll see a larger number of deaths.

If there’s one thing we’ve learned about a pandemic, it’s that it hits every level of government.  So the Bush School at TAMU hosted experts on local government in the latest episode of “Uncorked:” Dr. Ann Bowman and Dr. Robert Greer.  As usual, the program was hosted by Justin Bullock and Dr. Gregory Gause.

The panel got into more politics than usual this time, but they still managed an informative session, focusing on the impact of the COVID-19 pandemic on local and state governments.

As Dr. Greer noted, the pandemic has hit local and state governments in two ways: (1) rapidly rising costs, and (2) decreased revenues.  For states such as Texas–which, with no property or income tax, relies heavily on sales tax–the decline in revenue is especially severe.

When states and municipalities face challenges, the US economy faces challenges.  When there is a budget shortfall, states and localities layoff workers and, as Dr. Greer noted, about 13 percent of the US workforce is made up of state and local workers.

So, what can the federal government do?  All agreed that a unified, consistent message would be helpful.  They also seemed to agree that the CARES act, which provided assistance to local and state governments, as well as large and small businesses, was a step in the right direction. 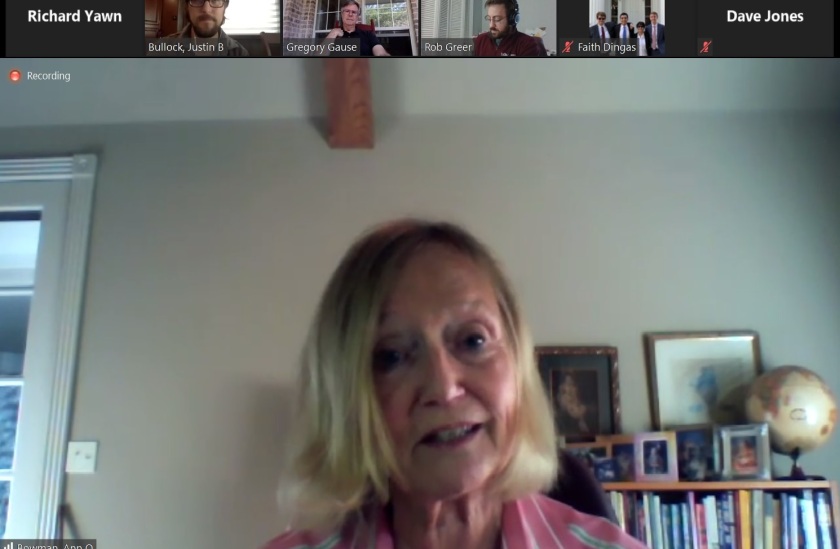 Additional funds will be needed, and where that money goes and how it will be allocated were concerns.  Greer mentioned money to the unemployed–of whom there are now record numbers–is a good way to pump the economy.  With little or no income, these workers will spend the money they receive, which multiplies through the economy.

The panel also responded to audience questions, at least one of which asked about the food supply.  This was a particularly timely question, inasmuch as Tyson has had to shut down several plants owing to large numbers of employees falling prey to the COVID virus.  At this point, the meat supply to the nation has dropped precipitously: production of pork, beef, and chicken, has fallen 30 percent, 15 percent, and 10 percent, respectively.  While this shortfall has yet to hit the stores (because of existing stockpiles), it will hit soon.  Indeed, today, President Trump indicated he would invoke the Defense Protection Act and order those plants to remain operational.

While Trump’s decision was, obviously, a federal action, cities, counties, and states play a role, too.  Most of our food inspection, for example, is done at the local level and, of course, the labor pool comes from cities and counties across the country.  In the case of these meat plants, the labor pool comes often from small cities and counties, where the meat plant may be a primary employer.

This is a new angle to the COVID-19 pandemic, one not much covered by the national media but, arguably, more important than the topics that are often covered.  In short: it was another educational program hosted by the Bush School at TAMU.

Thanks to the World Affairs Council, select LEAP students stayed engaged with international affairs–and the ever-present COVID-19–even as SHSU remains on remote-only learning.  The WAC contiunes to host programs via webinar with already scheduled speakers and additional guests and Wednesday evening was no exception.

Ambassador Rank is the United States’ former acting Ambassador for China and served in the US Foreign Service from 1990-2017.  After an introduction by WAC Executive Director Maryanne Maldonado, the event moderator, Ronan O’Malley, opened the webinar by prompting Ambassador Rank to provide some basic introductory information about China’s political and economic principles–before steering the conversation towards the elephant in the room, COVID-19.

With an economy second only to ours, China has had an increasing economic and political influence across the globe. However, there have been concerns with their current leadership, President Xi.  Despite their unusual communist-capitalist hybrid system (Ronan called it an “oxymoron”), President Xi’s autocratic ruling has caused concern for the decreasing political freedoms and basic human rights of the Chinese citizens living in China. 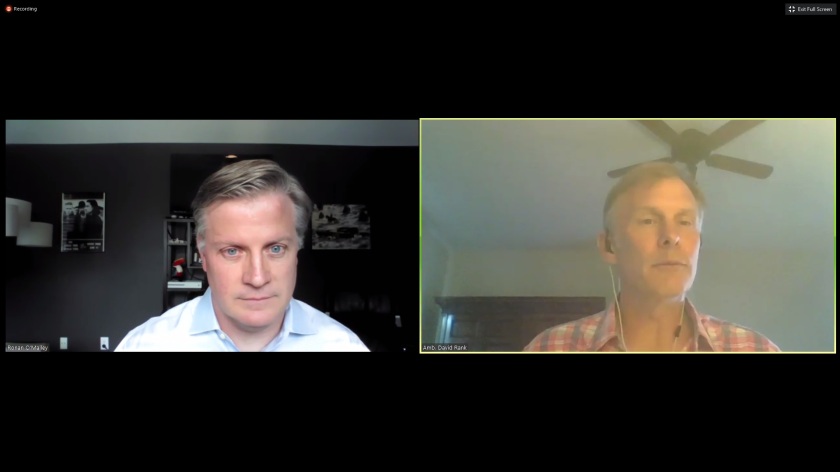 Ambassador Rank indicated that he considers the outbreak a textbook Chinese scenario, with the initial confusion and coverup before transitioning into an astounding and complete shutdown. He also suggested that China has been willing to pump aid around the world following the outbreak as a way to step into a more powerful global leadership role. Despite a few missteps, Ambassador Rank gave credit to China for legitimately trying to get supplies where supplies are needed.

One of the key problems addressed by Ambassador Rank is the US’s (over) reliance on foreign sources (chiefly China) for emergency supplies.  Might the US change its production or source of supplies?  According to Rank, “I suspect that when it’s ‘all said and done,’ more will be said than done.”

To continue with the US quality of life, specialization and global supply chains will likely continue, although we can hope we will be prepared with greater supplies and sources for the next emergency. 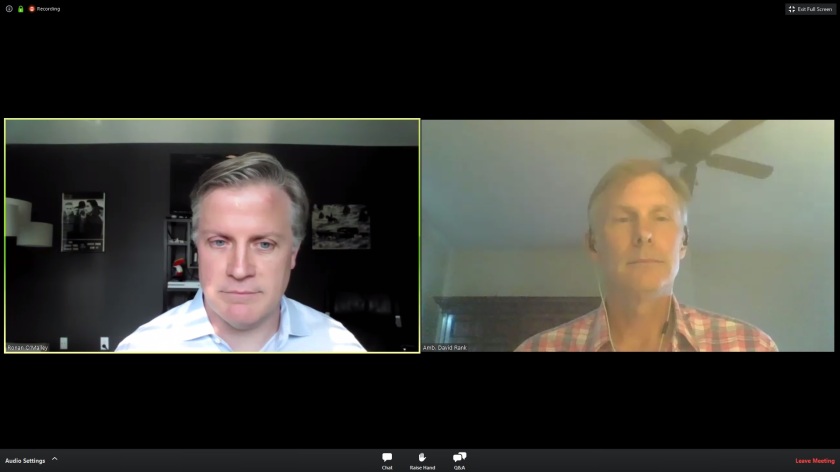 O’Malley asked Rank about his assessment of the State Department and the difficulties they are having keeping career civil servants.  Rank pointed out that, with the US withdrawing from many international organizations and treaties, civil servants have a very difficult job of maintaining relationships.  “They didn’t sign up for that,” noted Rank, and the result has been a depleted staff, arguably at a time when that experience is most needed. As the US has voluntarily withdrawn from global leadership, Rank expects to see China step in to fill that vacuum. 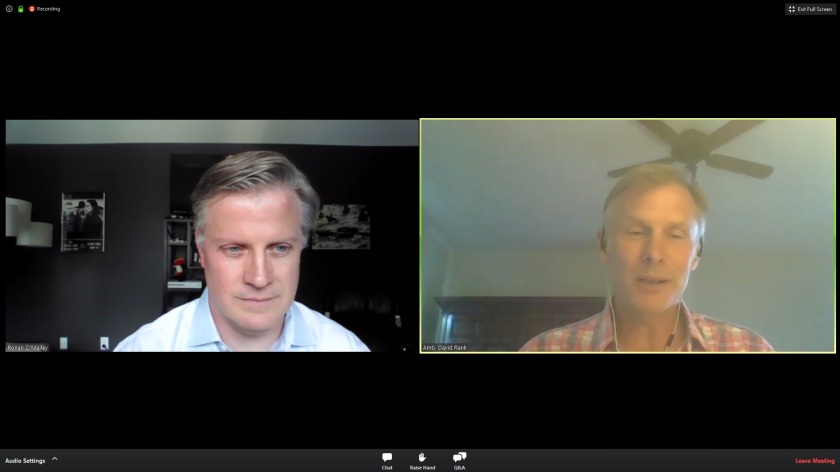 In wrapping up the discussion, Ambassador Rank used the opportunity to remind everyone listening that the only way to fight misinformation is by caring about your sources. He then gave some advice for those considering a career in international relations or foreign service by encouraging students to not only learn a foreign language but learn its culture as well. Exposure to the people and the way they communicate is essential to being successful in a foreign nation.

As always, the LEAP Center thanks the World Affairs Council for its programs.  LEAP Ambassadors Quinn Kobrin, Makayla Mason, and Maggie Denena would also like to thank future Bearkat Ethan Chang for participating in the event virtually, and they hope to be able to welcome him to SHSU in person once life returns to ‘normal.’