This week, the LEAP ambassadors got a brief break from COVID-19 discussions to hear Joshua Landis, the head of the Center for Middle Eastern Studies at the University of Oklahoma, speak about Syria and its current struggles in peace in an event hosted by the World Affairs Council of Greater Houston.

After an introduction from WAC Director Maryanne Maldonado…

…the event began with Basmah Ghauri – the Director of International Programs for the World Affairs Council – moderating.

The discussion started off with an overview of the Syrian Civil War, and who the key players are in the fight for control.

According to Dr. Landis, a vast majority of people in Syria have been hoping for a change in leadership. The Ba’ath Party has held leadership for decades, and is the political party of the current president, Bashar Hafez al-Assad.

The Assad family has been ruling as dictators for nearly 40 years, and it has long been the objective of the Syrian population that dictatorships such as this one be brought to an end. One major reason for this has been the class disparity and major income gap. As wealth made its way into Syria, and the upper class began driving fancy cars when most people had no car at all, the class differences became all too clear.

Landis proceeded to point out some of the challenges facing Syria throughout its military, social, and economic struggles. One of these is the international sanctions placed on Syria by the United States. Landis noted that these have been devastating to the Syrian regime and has done more harm to its people than its leaders. These sanctions have also been extended to anyone who does business in or with Syria, and so their amount of trade partners have begun shrinking.

Another of these challenges is the substantial cost of rebuilding Syria. Landis explained that it would cost nearly $300 billion to restore Syria, however the GDP is currently $9 billion, and the government only has $1 billion set aside for rebuilding.

Dr. Landis then discussed Syria’s rocky relationship with the United States. Ms. Ghauri asked whether there would be any leniency due to COVID-19. Landis said that the European Union has asked as much, but the United States government has said no, which means the aforementioned sanctions will remain in place.

The U.S. also has a strained relationship with the Kurdish population of Syria, which it enlisted to help in the war against ISIS. Apparently, as soon as ISIS was defeated, President Trump withdrew American troops and ended the U.S.’ alliance with the Kurds in order to avoid conflict with Turkey (whose government views the Kurdish population as a violent and radical group). America had no intention of supporting the Kurds long-term. As Landis explained it, “You sometimes have to use deceit to get your way in war.”

In order to come to a peaceful resolution, the United States is requiring regime transitions, United Nations backed elections, and for the Iranian military to vacate Syria to prevent Russia from having a foothold in the Middle East. 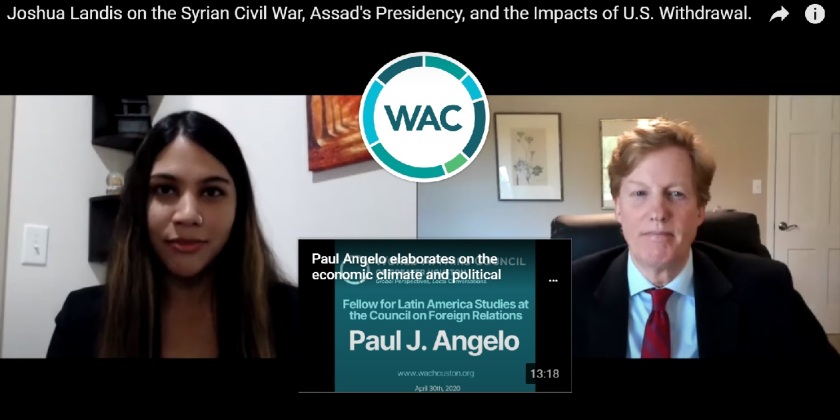 The main takeaway from the conversation was that, while U.S. sanctions and economic deprival may prevent Syria from becoming a threat, it also hurts the people of Syria, those of the lower and middle class, and prevents the nation from being rebuilt and having structure and peace once again.

I appreciate Dr. Landis and Ms. Ghauri taking the time to discuss the situation in Syria. I definitely learned a great deal about a topic I knew very little about, which is something I find myself saying after most WAC events!