The Texas City Management Association’s (TCMA) Annual Conference started on Friday with a warm welcome from TCMA’s President and City Manager of Granbury, Chris Coffman, followed by other welcome messages by the Mayor of Fort Worth, Dennis Shingleton, followed by the City Manager of Fort Worth, David Cooke, and Karen Pinkos, President of the International City/County Management Association (ICMA). Pinkos spoke about the important role city managers hold, and how their job is not only to value, but also to include people in the community.  Pinkos also spoke about a new ICMA program for assisting service members transitions into local government. Cooke then introduced the keynote speaker, Dr. Bertice Berry.  In her keynote address, “Living and Working in Purpose,” Berry captivated the audience with her humor and her sincere message. 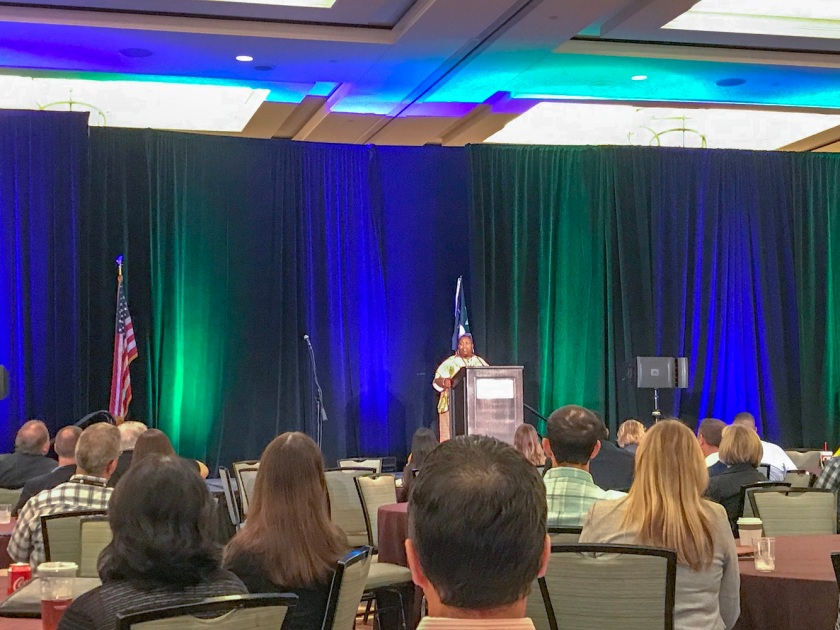 Dr. Berry also encouraged the audience to leave a legacy–not when you pass away, but every time you leave a room. “When you walk with purpose, you collide with destiny.”  Dr. Berry’s keynote speech made the audience laugh, tear up, and excited for the conference’s start.

The speech definitely worked for me, and I was fortunate to get a photo with her after her speech.

I had the opportunity to meet Jeff Green, Graduate Programs Coordinator, and tour the beautiful campus building, from the library to classrooms and even the administrative offices. 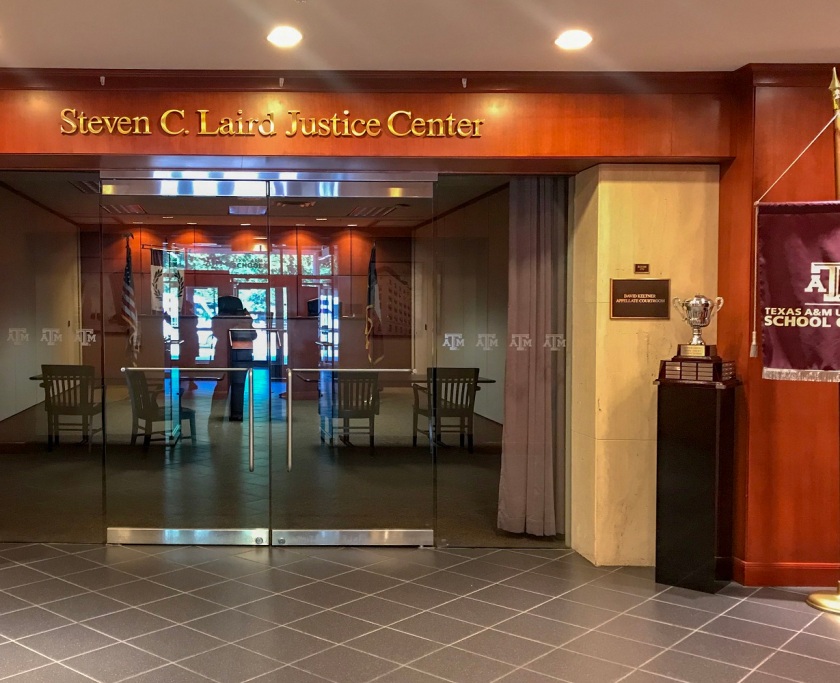 Since purchasing Wesleyan Law School, Texas A&M has worked hard bring in top law professors, recruit good students, and make the law school competitive in every way.  This is great news for students, but it also means that each year the school becomes more competitive.  Mr. Green explained this on our tour, while also describing TAMU’s rich traditions, such as the “12th Man” and “The Big Event,”activities that “demostrate A&M’s core values.”

Mr. Green was also helpful in discussing the general process for getting into law school: preparing for the LSAT, taking the LSAT, getting letters of recommendations, and, of course, earning great grades.

It was a great tour, and I am very appreciative to Mr. Green for his time and insight.

To maximize the coverage and education we will receive, we split up and attended both the “Valuing Equity, Diversity, and Inclusion” session as well as the “Managing Health Case Costs” session.

“Valuing Equity, Diversity, and Inclusion” included three panelists: Karen Daly (ICMA, Mountain Plains Regional Director); Carla Scales (Founder, Scales Consulting), and Mike Land (City Manager, City of Coppell).  They emphasized the importance of qualifications; as Ms. Scales noted, “If my house catches on fire, I would like the most qualified firefighter to go to my house.”  But they also emphasized strategies for getting diverse applicants: recruit from top and key institutions; post openings in a wide geographic range; and be thorough in your vetting.  With Texas being a majority-minority state very soon, the emphasis on diversity becomes ever important.

The “Managing Healthcare Costs” was particularly enlightening, with presentations by Samantha Dean (Workforce Services Director, City of Carollton) and Brian Dickerson (HR Director, Fort Worth).  We learned, for example, that the two most expensive costs in a City’s health care program are (1) retirees and (2) spouses.

These cities have taken different approaches to reducing costs, such as (1) negotiating with companies for the cheapest rates, (2) making preventitive care mandatory (penalties are actually imposed if you don’t get a checkup, for example), and (3) not covering spouses–only if spouses have access to care from their own jobs.

Lunch at the Little Red Wasp

Walking into Little Red Wasp, the bright red chairs and minimalistic arrangement drew our attention immediately. Our server was attentive, and the food was amazing.  For lunch, we weren’t very adventurous, choosing the boring (but really good) crispy chicken sandwich with cabbage slaw, spinach, tomato, and tapenade…

…while Professor Yawn ordered a roasted Portobello sandwich with goat cheese, spinach, tomato, and tapenade.  We were all pleasantly surprised with our options – and agreed that the various ingredients and condiments corresponded well with each other.  We recommend!

“Breaking into the Profession,” featured a panel including City Managers Sereniah Breland (Pflugerville), Robert Camareno (New Braunfels), and Gina Nash (Sachse), and Karen Daly, ICMA Mountain Plains Regional Director. All the panelists spoke about their own untraditional path to being a city manager. Several emphasized the importance of networking and forming connections whenever you can. Our favorite portion of the panel was the advice from Sereniah Breland to the young professionals: “If you wait until you’re ready, you’ll never do anything. Do it, and if you’re scared, then do it scared.” We would meet Ms. Breland again on this rewarding trip.

After the conference we had the opportunity to visit the Kimbell Art Museum, designed by architect Louis I. Kahn.  The sun was still shining in the early evening which allowed the natural light to pour into the building and illuminate the paintings, which appealed especially to Esmeralda, on her first visit to an art museum.

The Kimbell has pieces by several famous artists such as…Rembrandt van Rijn….

…Vincent Van Gogh (whose painting was prohibited from photographing)…Piet Mondrian…

The Kimbell’s current special exhibition is “Monet: The Late Years” which showcases a collection of pieces from Claude Monet’s works in the twenty years or so years prior to his death in 1926. The exhibit is laid out in a more or less chronological progression of his works from 1900 to his final piece in 1926. 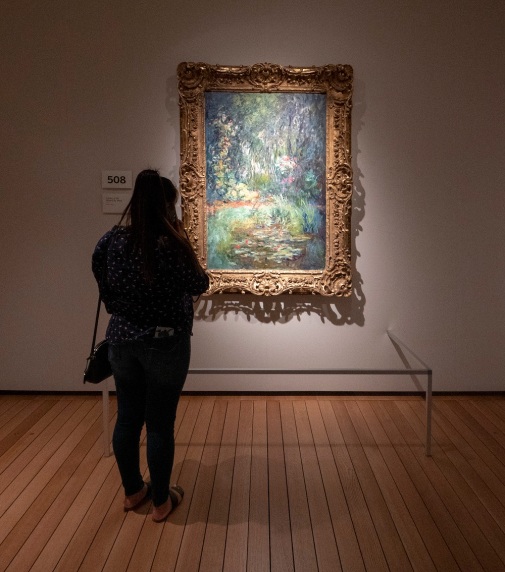 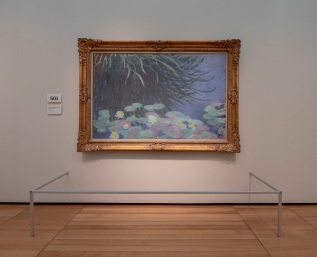 Throughout the exhibit you can see how Monet’s struggle with cataracts influenced elements of each painting in the colors he used and the size of each brush stroke.  For example, the detail in this piece suggests it was one of the earlier pieces in this exhibit.

And, indeed, the piece above was painted in 1904.  The piece below, on the other hand, was painted in closer to his death, when his eyesight and style had changed, moving him in a more abstract direction.

Miranda’s favorite painting from the exhibit was entitled “Roses,”

and Esmeralda’s was “Weeping Willow.”

We both enjoyed seeing the layout of Monet’s estate, and his garden, where he drew his inspiration for his paintings. 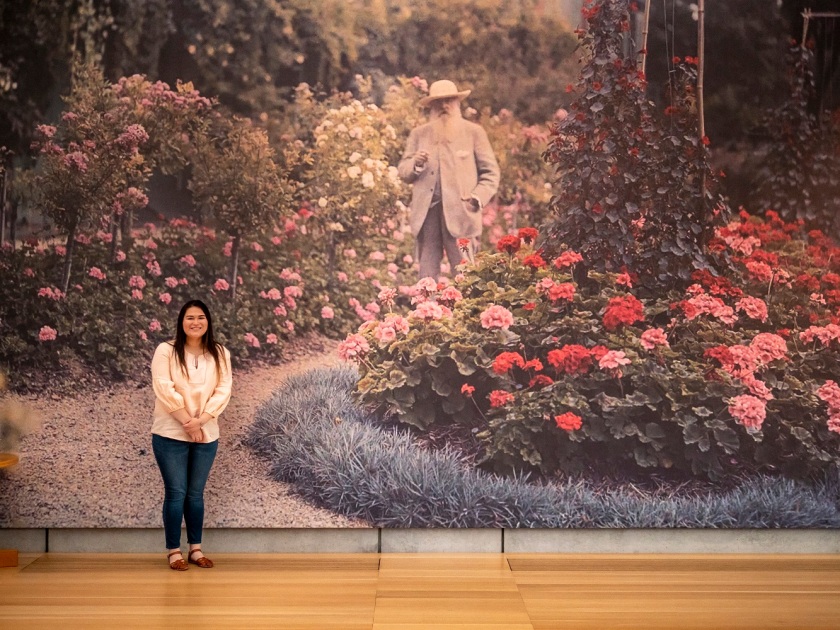 Reata Restaurant was definitely a new experience — a mix of country and fancy, with expensive cigars displayed at the entrance, and raised candle centerpieces. Given the atmosphere, we were surprised that it was a more “Mexican” place to eat, evidenced on the menu. For starters, we ordered jalapeno and cheese elk sausage… 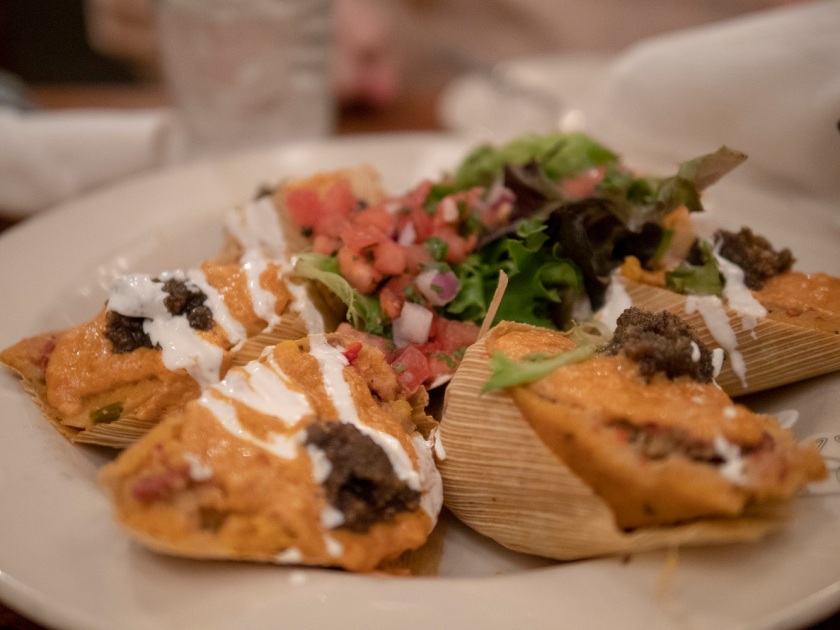 and Reata’s classic cornbread with butter. Those who had them especially enjoyed the tamales – they were nontraditional to say the least. For our entrees, we ordered boring food…grilled chicken breast topped with tomato bleu cheese salad, and chicken chile rellenos served with roasted corn chowder, and one slightly more adventurous chef’s special = quail. With a few minor exceptions, everyone else seemed to enjoy their food (Esmeralda was not a fan of the bleu cheese on her entrée). For dessert, we shared molten chocolate cake with drunken berries and vanilla cream, and a cappuccino crème Brule.

Miranda absolutely loved her dessert; it was my first-time tasting crème Brule, and while I was a bit anxious, I enjoyed it – it tasted like a melted cappuccino from Starbucks, with a buttery texture. We all agreed while it was nice to try new things, we had eaten too much over the course of the day!

To walk off a few of the calories from dinner, we decided to visit “Sundance Square” in Fort Worth, which features places for people to congregate, water fountains, and a beautiful Richard Haas Mural, “The Chisholm Trail.” 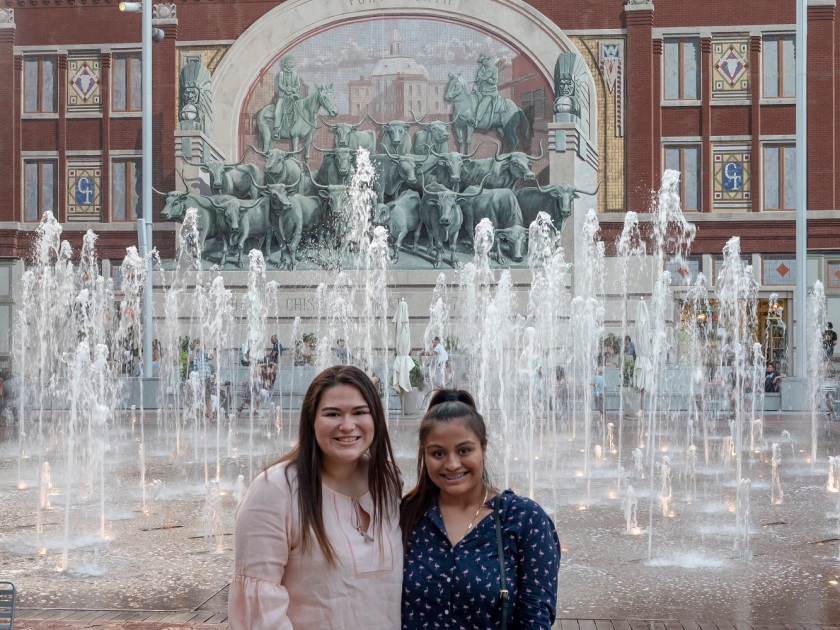 This location held particular interest for Esmeralda, who is interning with Linda Pease at the Wynne Home.  Ms. Pease was responsible for having Richard Haas do some fourteen mural projects in Huntsville in the 1990s, and it was definitely interesting to see another of his large-scale works.

We also made our way over to the Forth Worth Water Gardens, which were designed by the great architect Philip Johnson in the 1970s.  The site was used in the science fiction film “Logan’s Run,” as evidenced in this scene:

We made sure we used this opportunity to get some nice photos. 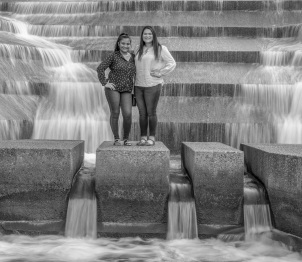 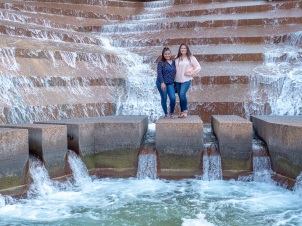 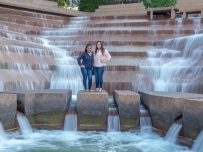 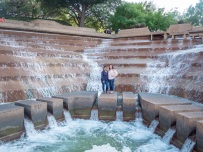 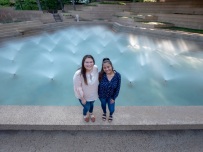