Our Midwestern Trip second day was especially busy. After a short night and a hearty breakfast, we headed to the Ulysses S. Grant National Historic Site, located in Webster, Missouri.

First, we watched a short video that covered Grant’s life and career, emphasizing the loving relationship between him and his wife Julia, as well as covering his military and presidential careers.

Grant was originally from Ohio, and later graduated from the United States Military Academy at West Point, where he met his roommate and future brother-in-law, Fred Dent. He actually resigned from the military to be closer to his family but re-entered when the Civil War began. He rose to prominence with excellent military skills and led the Union to victory. A few years later, he was elected President of the United States.

It was Julia’s childhood home, and home to Ulysses and Julia for many years of their marriage. Julia’s father, Fredrick Dent, named it White Haven in honor of another property he had; subsequent caretakers of the house during Grant’s ownership painted it green. Inside, as we walked through the halls and rooms filled with pictures and quotes from the Grant family, we imagined how life was over a century ago.

After lunch we ventured deep into St. Louis to tour the Gateway Arch. The closer we got to the Arch, the more intimidating the monument became – it was stunning, elegant. The panes reflected the light so as to make it look iridescent. 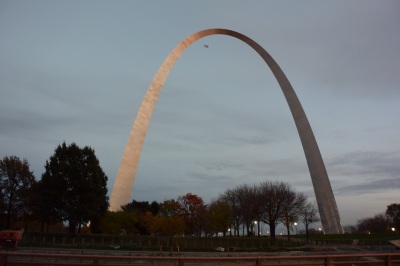 We made our way underground to the visitor’s center where we bought our tickets to ride to the top. The Gateway Arch was designed by the Finnish architect Eero Saarinen; it took $13M and a little over three years to complete. Comprised of stainless steel, it reaches a staggering 630 feet high, making it the world’s tallest arch. To get to the top of the Arch – and the spectacular views – we traveled in a small pod (emphasis on small) that offered a rocky trip up the arch. 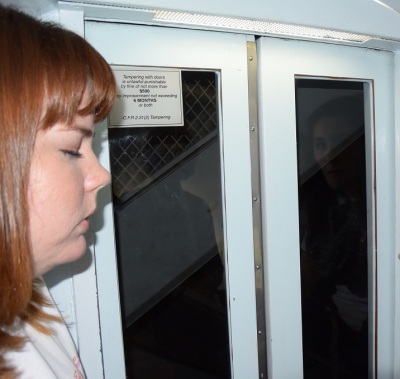 After checking out the beautiful views…

…it was, back down to the visitor’s center to begin our next adventure to the Old Courthouse.

The Courthouse looked much like a capitol in that it had a large dome and several levels that were separated by beautiful spiraling staircases.

On a more substantive level, this is the building in which Dred Scott sued for his freedom, winning in state court, but losing when his case made it to the Taney-led Supreme Court. 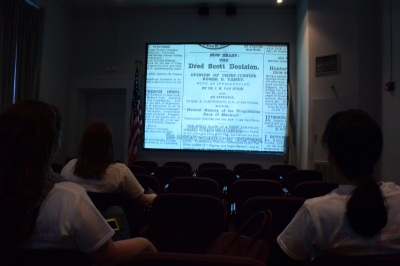 This much we knew going into the building, but what we didn’t know is that Mr. Scott was granted his freedom by his “owner” and, although he died a short year later, he died a free man.

Feeling rather free and adventurous ourselves, we walked through several local parks, took a picture with the “running man…”

…and, of course, took selfies… 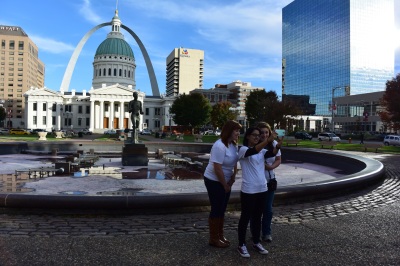 …and then ventured through several historical buildings. We saw the Wainwright Building, which was constructed in 1981 by Ellis Wainwright and designed by Louis H. Sullivan, who would go on to mentor Frank Lloyd Wright. The Wainwright Building became the father of the contemporary skyscraper and was a turning point in architectural history.

Regaining energy with a Starbucks break, we left to further our learning in the state of Illinois. We arrived in Springfield just in time to eat and take a nighttime tour. We mollified our hunger at Lake Pointe Grill where, according to Silvia, there is such a thing as too much arugula on a pizza. Lake Pointe Grill boasts the only wood-burning grill in Springfield, clearly showcased by the delicious fare we enjoyed. We did not dally at dinner, as the Capitol was drawing us in, in all its glory.

Our first night stop was in front of the Capitol building, where our architecture lessons continued. Showcasing a French Renaissance style, the building lit at night seemed spectacularly imposing. The current capitol building happens to be the sixth Capitol building since Illinois became a state. Designed by Cochrane and Garnsey out of Chicago, the immensity of the building begged exploration. Even though we were not able to enter, we were successful in taking a photograph with Abe Lincoln before making a regrettable leave to our next stop. 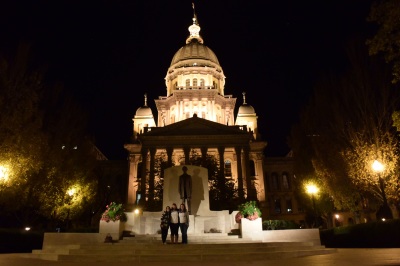 Lincoln’s influence in his hometown does not end at the Capitol. Mr. and Mrs. Lincoln’s home sits smack in the middle of town. After searching the park full of many historical homes, we finally found the former President’s home on the corner of Eighth Street. The home clearly fit the spacial needs of the Lincoln family, compared to its original (smaller) size when they bought it from Rev. Charles Dresser. 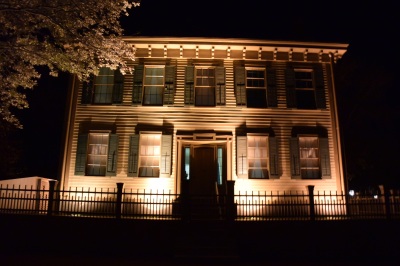 To finish our nighttime explorations of Springfield, Illinois, we juxtaposed the very proportionate and grand architecture of the state house with a Frank Lloyd Wright home. Mr. Wright built the early 1900s home for Dana Thomas, with imposing walls and sunken bricks representing the change from the open, trusting social life to the more guarded, private lives of the early 1900s. Even though it was dark, we could clearly make out his trademark hidden front door, taunting us with what is inside. So different from the vertically enhanced capitol building, Wright’s horizontal home seemed to sink into the ground and succeeded in representing the plains of America.

Back in the van, we headed to Chicago to continue our journey in the “Windy City.” As we ended another long day, we anticipated a chilly, activity-packed day –to hopefully fulfill our goal to learn more about the art and architecture the White City has to offer.