“Listen, learn, help, lead.” No better words could stir a group of young ladies interested in the political realm than those spoken by Nancy Bocskor, “democracy coach” and mentor, at the LEAP Center’s Women in Politics Workshop held Thursday afternoon. One of many events attended by Ms. Bocskor during her time in Huntsville, the informal workshop focused on (1) Bocskor’s experience on the Hill–and her path to getting there–(2) her accomplishments of helping international women “and a few good men” become more politically active, and (3) how this generation of women really has the chance of being the change they wish to see in their communities by running for public office.

Ms. Bocskor began the discussion with her worldview that “If you don’t have a place at the table, you’ll end up on the menu.” After spending her entire career walking the walk of what she believes, Ms. Bocskor now strives to inspire young women by putting the world into perspective. Women have the capability and empathy to run for office and change the world, but too few women, according to Bocskor, have the confidence to do so. Ms. Bocskor, impassioned by the global war on women, reaches out to women everywhere by speaking and teaching the skills it takes to achieve public office.  She has done extensive research on and experienced firsthand the injustices suffered by women in places like Moldova and Jordan, where women in the past could not even run for public office, but with the help of Ms. Bocskor can now run and even win. LEAP students learned of the differences between how men and women see public office, from egos to empathy and everything in-between.

Nancy Bocskor, who worked with Newt Gingrich at the ripe age of twenty-one, has proven her idea that “in politics, you aren’t measured by your age, but instead by your capabilities.” Ms. Bocskor made the point that women have not stepped out to lead because “you can’t be what you can’t see.” Without visible role models, young women struggle finding appropriate aspirations for leadership positions. 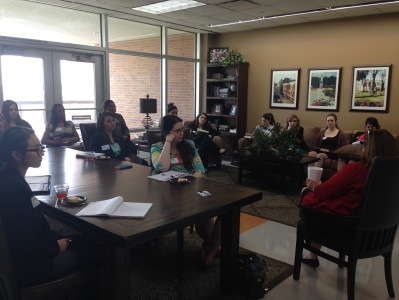 But anyone that has had the chance of being in her presence and hearing of her impressive accomplishments, cannot help but agree that Nancy Bocskor makes one incredible role model to young political activists everywhere. All it takes is a conversation with Ms. Bocskor to completely change one’s path for good. With such a remarkable resume, Nancy Bocskor inspires young women because she has truly made a difference in the world and now she has changed lives here in Huntsville just as she has across the world. From simply listening and learning about our stories, Ms. Bocskor taught LEAP students the steps necessary to become successful in the ever-changing political spectrum, such as simple steps of doing research and asking questions. Armed with the idea that they could conquer the world by simply caring, the young ladies of LEAP left the workshop prepared and motivated to explore the political journey that lay before them.