The LEAP Center has enjoyed having Ms. Nancy Bocksor in Huntsville for the week to encourage students to become engaged in politics and take action to make a change. During her Paths to Public Service lecture, Ms. Bocksor stressed the importance of gaining a sphere of influence before deciding to run for office. For students, this tip prompted many to think about their current sphere of influence, and what steps they could take to help position themselves for a career in public service. 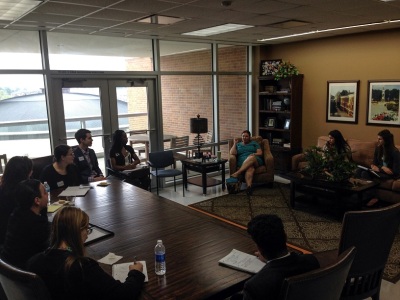 Ms. Bocksor also discussed the importance of brand management when pursuing a path to public service. She defined brand management by calling on a definition offered by  the founder of Amazon, Jeff Bezos: “Your brand is what people say about you when you leave the room.” To underscore this point, Ms. Bocskor encouraged students to act professional, be engaged, and clean up social media accounts–all of which can constitute a personal brand. Generously, Ms. Bocksor was extremely helpful to students by giving ample advice on a variety of topics ranging from thank you notes to tips for internships.

To the students’ delight, Ms. Bocksor discussed some of her successes and her many experiences traveling the world to help women become engaged in politics. Students were amazed by the amount of traveling Ms. Bocksor gets to do and how unique her career is. However, the majority of the lecture Ms. Bocksor opened up for questions, giving students the opportunity to interact directly. Ms. Bocksor’s energy appeared contagious to the students and many thought her stories were inspirational, driving them to pursue a career in public service.

Students enjoyed getting to learn from Ms. Bocksor this week. For many, she helped instill a zealous attitude and helped give students a sense of direction in pursuing a career in public service. After enjoying some refreshments, Ms. Bocksor hurried over to the Wynne Home (with students in tow) to co-host a Film Festival with Dr. Carl Rollyson, a continuation of the learning process for students of the LEAP Center.