After a great night of rest, we made our way to the impressive Biloxi Visitors Center. At the visitors center we were able to sign up for a tour Biloxi’s Lighthouse. The Biloxi Lighthouse was built in 1848 with a cast iron exterior and brick interior. It is 65 feet tall and has been electrically operated since 1926. An interesting fact about the Biloxi Lighthouse is that it was civilian operated and many of its operators were women, including one stretch of 50+ years where only women operated it. As we walked to the lighthouse we noticed another one of its unique features: it is the only lighthouse between a highway thoroughfares. 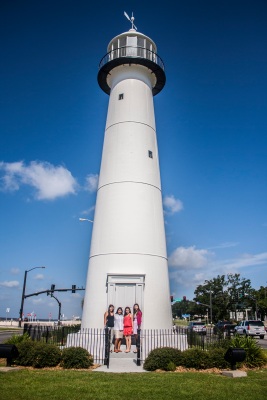 We couldn’t imagine what it was like to be the lighthouse keeper in the southern heat! 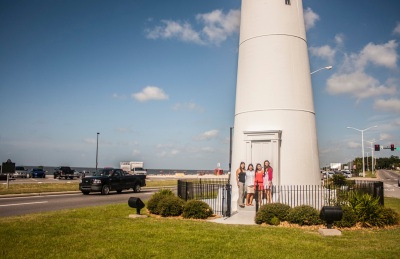 When all of us had enough of the heat we began our journey down the stairs. It was way easier to go down than up, but still frightening for some. Once we were back inside the visitors center we were able to learn more about the lighthouse and the challenges they have faced on the coast of MS. For example, the lighthouse has endured many storms, most notably Hurricane Katrina. Hurricane Katrina caused much damage to the lighthouse. It filled the lighthouse with 21.5 feet of water and four hundred thousand dollars in reconstruction costs. The lighthouse was torn and battered by the destructive storm, but it still stood tall and was seen as a symbol of hope and resilience during the disaster, and the light in the lantern room still lights up the waters every night.

Following our exhilarating climb at the Biloxi Lighthouse, we drove along the shore to the George Ohr-O’Keefe Museum of Art. George Ohr is the self-proclaimed “Mad Potter” whose art was relatively unknown until fifty years after his death.

Designed by architect Frank Gehry, the museum building and grounds provide a stunning man-made counterpoint to the beautiful beaches, which are located directly across the highway.

Since it is the tenth anniversary of Hurricane Katrina, much of the current museum exhibits are dedicated to commemorating the hurricane. Biloxi, right on the Mississippi coast, was hit hard when Katrina rolled in. The damage to the lighthouse helps visitors visualize the magnitude of the storm in Biloxi.

In the lobby of the museum, there are many statues constructed out of wood.

Marlin Miller, a popular artist who took the dead and destroyed trees left after Hurricane Katrina and carved them into masterpieces that now decorate the once desolate landscaping of Biloxi. The museum contained a few of his sculptures each representing various emotions surrounding Hurricane Katrina.

The sculptures were beautiful and representative of the way Biloxi rebuilt itself after the storm. 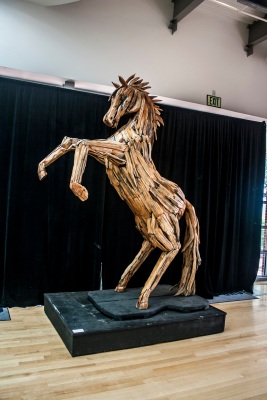 The exhibits reminded visitors of how severe Katrina was and the change that has occurred since then. The Mississippi Power Company and the local news each had exhibits in the museum explaining the aftermath and their job when cleaning up. After the Katrina exhibits, we visited the main exhibit showcasing George Ohr’s pottery. George Ohr was born in 1857 and in 1879 he began his pottery career in New Orleans, LA.  Ohr’s philosophy was that no two pieces of pottery should be alike because no two people were alike. To create thousands of pieces and not craft two pieces alike illustrates his creativity and support for individualism. Unfortunately, George Ohr’s pottery studio was burned in a fire in 1894. However, when he opened his new studio, it marked a significant change in his pottery with many brighter and bolder colors than his previous works of art. It was amazing to see the shift in his artwork and the transformation throughout his life.

Although not entirely what we expected, we immensely enjoyed learning about Hurricane Katrina’s impact on Biloxi and about the famous “Mad Potter”. The museum marked our last stop in Biloxi and we departed for New Orleans, the penultimate destination of our Tour of the Deep South.

Upon arriving in New Orleans we stopped for lunch at a New Orleans style restaurant, Elizabeth’s. The restaurant was founded in 1996 and their mission has, since then, been to make everything from scratch to provide a great product with the care and creativity that it deserves. We began with boudin balls and praline bacon as appetizers. Kaitlyn went with the special for the day which was Elizabeth’s original, Joe’s scramble. Alex and Karla went with the hot sausage Po’ Boy which was plenty of food for both of them.

It was also something they had never had before. It was a sandwich with a sausage with a soft spice kick to it. The restaurant was also very unique with plenty of colorful art on the walls that is from a local artist named, Dr. Bob. The art featured many NOLA sayings and recycled bottle caps as borders. His shop was located directly down the street from the restaurant.

After days of intense sightseeing and learning, we decided that retail therapy would be a nice way to spend an afternoon in New Orleans. For a few hours we walked the interesting streets of the French Quarter, shopping and absorbing the culture of the great city. There were countless vendors that sold a variety of things. We saw the traditional Mardi Gras beads, souvenirs, and so much art work! I bought a print from a local artist of one the horses that give carriage rides to locals and tourists. All of the artwork was unique. And while the shopping was going great, we were even more amazed by the entertainment that filled the streets. Instruments of all sorts made music that could be heard throughout NOLA. Dancers, magicians, comedians, and many more make a living on the streets of New Orleans keeping folks entertained sun up to sun down.

This was a new experience for all of us – especially Bourbon Street.

Many of us had heard what it would be like, but being there was totally different than any of us expected. It was a diverse place that offers so much to do and see.

For dinner we went to the famous Oceana Grill, we heard great things about this restaurant and couldn’t wait to try the food. We got there and were surprised by a long line of people waiting to be seated outside the door.

After waiting in line, we finally got seated. We began with gator tail bites, Cajun alligator sausage, Oceana’s famous oysters, and gumbo.

For most of us it was our first time trying many of these appetizers. It seemed like a lot for starters, but they were all great and gone in no time. Megan and Alex shared one of New Orleans Favorites, the Taste of New Orleans that came with creole jambalaya, crawfish étouffée, red beans, and rice with smoked sausage. Kaitlyn and Karla shared a crawfish fettuccini pasta with freshly diced green peppers and New Orleans seasonings. We were all so pleased with our food, it was much more than we expected. It added more definition to the culture.

After an appetizing dinner, we walked around the town for a while. The “day crowd” was different from the “night crowd”, but unique all the same. 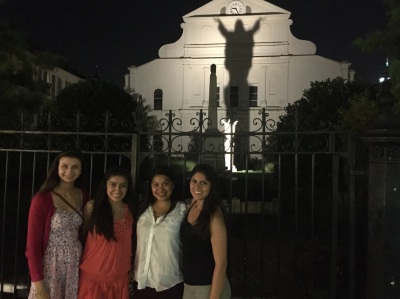 Dessert was spent at Café Du Monde enjoying some warm and fresh beignets and chatting about the day’s events.

On the walk back to the hotel we enjoyed taking pictures at landmarks and learning a new way of life. We were all very sad that tomorrow would be the last day of our tour, but thankful to have had this amazing opportunity! The South has been great to us.