We began our morning with a trip to the village of Homewood, Illinois to check out their Richard Haas murals.  Although Huntsville boasts the largest collection of his murals (14), we were excited to find 13 murals that call Homewood home. Arriving in the quaint village, we parked and excitedly began our scavenger hunt for the elusive, illusive murals.

The first we found clung to the wall of a florist’s shop, a greenhouse to accompany the business’ theme.

Moving on, we came across a theater, paying homage to the original theater and marquee formerly found in Homewood.

Interestingly, the theater’s “Coming Attractions” involve at least one film involving Chicago, “Some Like it Hot,” which the LEAP Center used as its centerpiece for our Marilyn Monroe Film Festival. 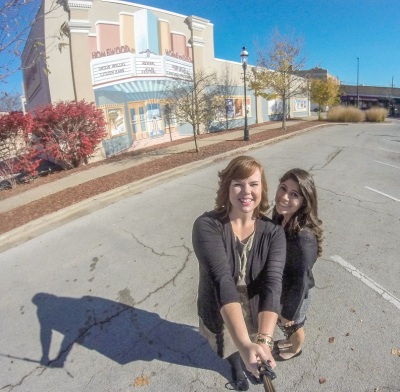 Walking down the historic Dixie Highway, which connected the US Midwest with the South, we came across even more murals–one in recognition of the ever-present Midwestern prairie alongside the Dixie Highway…

…one depicting dancers (on the side of a dance studio, no less),

and finally, an extensive mural on the history of the bicycle.

With the hunt for his thirteen murals complete, we hopped in the car to commute to downtown Chicago.

Parking was a challenge, but we found a central location. We ventured into the very busy Chicago streets and made our way to Millennium Park, where the very famous public sculpture “Cloud Gate” (a.k.a., “The Bean”) is located.

Constance had visited Chicago and “The Bean” last year, and she guided us through the crowded crosswalks that astounded Alex, thankful to not be wandering aimlessly alone. The crowd of Chicago pedestrians thinned out around Millennium Park, and we were met by a new crowd of tourists at “Cloud Gate” (Anish Jay Kapoor), where we actually fit right in. We explored the sculpture, and snapped a number of pictures before Professor Yawn and Stephanie met us there. Alex even had the chance to participate in a picture series photographer Susan May Moody is working on titled, “Jumping at The Bean.”

She wasn’t the only one in the series.  Others also jumped for joy.

After taking more pictures than we’ll ever use, including one with sculptures by Jaume Plensa… 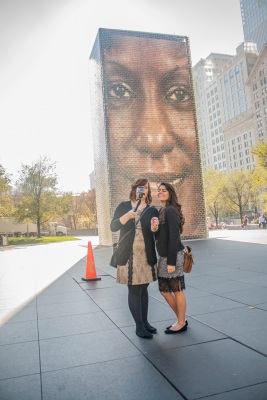 …we made our way down to the Chicago Architecture Foundation shop. We were welcomed by souvenirs of an architect with whom we are all familiar, Frank Lloyd Wright–as well as an intriguing model of Chicago.

Circumventing busy professionals and tourists alike, we lunched at Russian Tea Time. Our first time trying Russian fare proved to be a bit overwhelming initially, by all the menu items offered, but we were excited to dig in to our appetizers, stuffed mushroom…

The food was wonderful. We look forward to the opportunity of comparing the Russian schnitzel with the Austrian variety we will try at Grunauer’s in Kansas City in a few days.

Stuffed, we walked off a bit of our lunch en route to the Chicago Institute of Art.

Constance was excited about her return trip through the extensive exhibits, she was most excited to view Grant Wood’s “American Gothic,” which was on loan during the LEAP Center trip to the Film and History Conference last year. Alex, on the other hand, reported being overwhelmed upon entering the vast lobby of the 122-year-old building originally built to house the 1893 World’s Columbian Exposition. 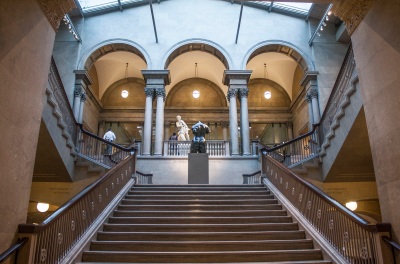 With no time to see all the works, and with exhibits separated by style, we began in pre-1900 American art, perusing Tiffany lamps… 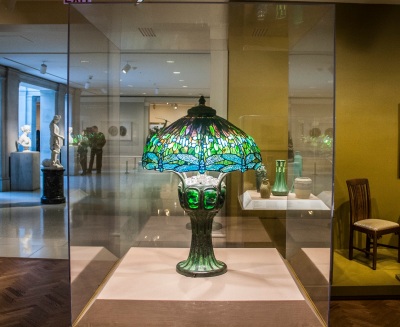 sculptures and paintings alike by Frederick Remington, and quite a few works by John Singer Sargent. We focused next on American art post-1900, where we encountered several works by Georgia O’Keeffe, Edward Hopper’s “Nighthawks,” 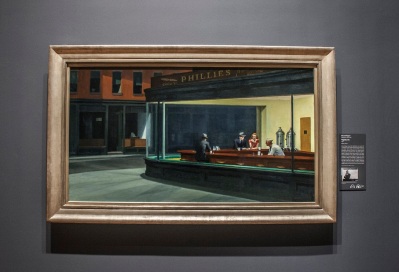 Next, we headed to the much-anticipated Impressionist exhibit to find Renoir, Degas, and Monet.

We were awed, overwhelmed by the immensity of the exhibit along with the magnificence of its various artists. Just being in the same room as so many notable artist’s works was like a dream. To commemorate we took a few photos with one of the most famous works, Georges Seurat’s “A Sunday Afternoon on the Island of La Grande Jatte.” 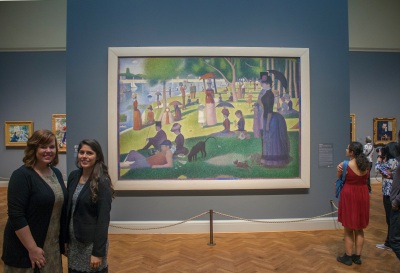 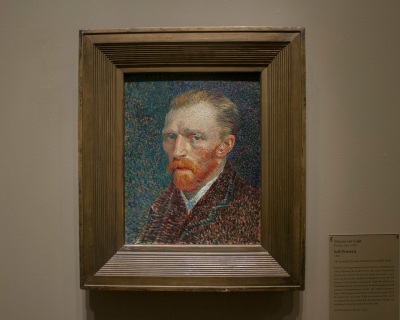 It was also a chance to make connections to other things we’ve seen and done.  The Museum, for example, had a statue of Abraham Lincoln by David French, whose also did the statue for the Lincoln Monument, a replica of which also graces Lincoln’s Tomb.

There was also a sculpture of James Fraser’s “End of the Trail,” the larger version of which Constance had seen on her first LEAP Center trip to Oklahoma City.

Finally, we also had the chance to view an expansive exhibit of sketches, paintings, and even sculpture by Edgar Degas, famous for his dancers.  Both of us have seen his house in New Orleans, on separate LEAP Trips.

To finish our musings, we scouted the Modern art section, part of which, much to our dismay, was closed for construction. Deterred not, we explored the farthest exhibit from the entrance in search of pieces by Salvador Dali, Henri Matisse, and Pablo Picasso. With little time left for wandering, we took photos with a few renowned art pieces, such as Picasso’s “The Old Guitarist.”

Alex, new to Dali and Matisse, commented on the distinction their art holds in the easily recognizable themes in their pieces.

But we also discovered other artists with whom we weren’t familiar (but  researched and found to be quite famous!), such as Lyonel Feininger…

We left the museum, awed by the history we had encountered and encouraged by the inferences we can begin to make as our repertoire of art knowledge grows.

With the sun setting, we began a brisk walk towards our anticipated yet unnerving next destination, Willis Tower. Built in 1973, the 108-story building rose above us, almost as if to gloat in its terrifying height. We bought our tickets, entered the elevator, and began ascending to the Skydeck at a whopping 17 miles per hour (or 24 feet per second), finally reaching the top, 1,353 feet high. 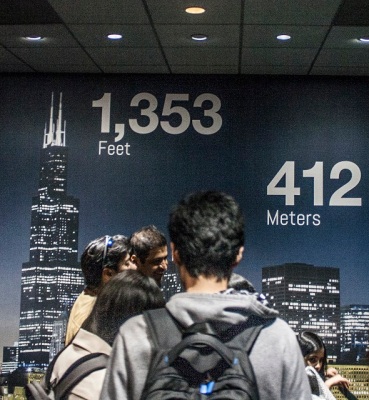 At the top, we encountered 360-degree views of the Chicago skyline at sunset.

It was completely worth the frightening elevator ride. Mustering much more courage, we even had the chance to stand on a clear floor 1300 feet up in the sky, which was beyond our comfort zone.  With that behind us, we had an impulse to leave, but we stayed, continuing to document Chicago’s descent into night.

After the adventurous and phobia-induced experience at the Willis Tower, we taxied to Loyola University Chicago School of Law …

to meet with former Junior Fellows President, Daniel North – a reunion of sorts for Professor Yawn and Stephanie, and an introduction for us. Daniel showed us the equivalent to the LSC Ballroom at SHSU, where we sat while Daniel described his life at law school along with his plans after graduation, answering our questions about law school, and reminiscing about his time at SHSU and as a member of the Junior Fellows.

Daniel also showed us the courtroom where the Loyola Moot Court teams argue, and the Loyola law library, where we can expect to spend numerous hours in study. It was another connection for Alex, who recently spent time at UNT and TTU Law School Courtrooms as part of her Moot Court Experience. 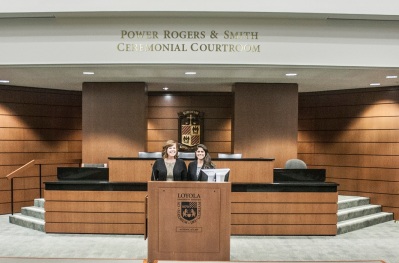 We also attended a Professional Responsibility class session with Daniel and his classmates. We sat in the back row of the class where we could see all the students prepared for class with their laptops, water bottles and books. Professor Grogan was passionate about what he was teaching and incorporated many previous cases which he has encountered (or taken an active role in) to help students understand the material.

Professor Grogan made the class exciting and kept his students engaged by incorporating humor. The main topics of discussion during the class were contingency, ethics, fraud, and a brief note on veterans, which quickly captured Constance’s attention. The hour and forty-five minute class flew by because of the interesting material and discussion.

It was an amazing experience for us, and we were very grateful to Daniel and Loyola Law for giving us this opportunity.

Daniel continued discussing his law school experience while we walked to Lou Malnati’s Pizzeria for dinner. After splitting a couple of small appetizers… 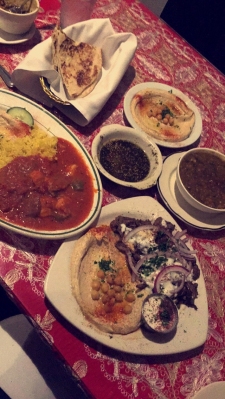 we shared a “classic” Chicago-style deep-dish pizza, filled with cheese and topped with a layer of sausage. Daniel suggested that one slice would be enough, and one slice was definitely enough for most of us!

After such a filling dinner, we hoofed it for about a mile and a half across Chicago, checking out the beautiful architecture and river scenes.

One such photograph we specifically took for Austin Campbell…

…who, for reasons unknown, is obsessed with Donald Trump.

Getting in past midnight, and leaving Chicago at 6am, we returned to our hotel, with a busy and bustling day to reflect on as we descended into sleep.