After a quick coffee stop to help wake us, we were fortunate enough to visit the Supreme Court of Arkansas.

We met with the public education coordinator, Cara Fitzgerald, who earned her law degree from Southern Illinois University and who passed the bar in at least three states! 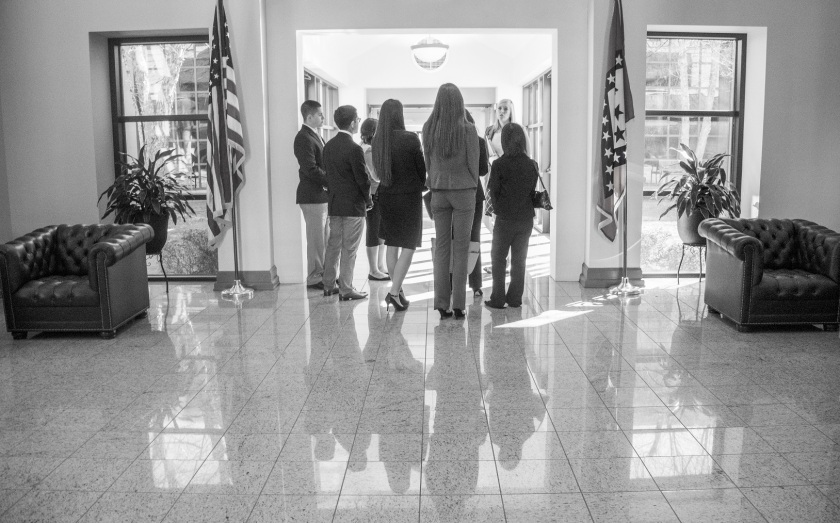 We continued the tour of the west wing, where they display the portraits of the previous justices who have served on the Supreme Court…

…and as we moved along we were shown the portraits of all seven presiding justices.  The first thing that stood out to some of us was that the majority of the Justices currently on the Supreme Court of Arkansas are women.

After learning more about the current Justices and the recent death of their Chief Justice, Ms. Fitzgerald introduced us to Associate Justice Robin F. Wynne who joined in on the tour! Once in the courtroom, we introduced ourselves to Justice Wynne and he then introduced himself and told us about his journey to becoming a Supreme Court Justice.

He then asked us the simple most important question that he asks all of his students, “Why do you want to be an attorney?” Many of us had not been asked this question before, which led us to really reflect on why we wanted to go down that career path. Our answers to the question ranged from helping people and having a say in our society to solving puzzles and upholding the law.

After Justice Wynne was able to get to know us more based on our answers, he and his law clerk, John Webster gave us great advice on how to get the best out of law school.

John Webster explained to us exactly what a law clerk does and why, if we get the chance, it is an opportunity to take advantage of in law school. They also explained to us what they look for in applicants for their office, and one of the most important things was a “hook”. Justice Wynne explained that he not only looks at grades, but also the substance of the applicants’ character. After the very informational discussion with Justice Wynne and Mr. Webster, they took us on a very personal tour of his office where he explained what his typical week at the office consists of. Oral arguments are on Thursday; opinions are on Wednesday; and Monday and Tuesday are much-needed reading days. Each justice is assigned five cases a week and one of those is considered a primary case in which they take a leadership role. After discussing this process, he showed us the conference chamber where the seven justices meet after oral arguments to talk about the reasons they dissent or support each others’ opinions.

Justice Wynne even let us take a picture in the conference chamber with him!

After the private tour, we asked Ms. Fitzgerald how often tour groups get to go up to see the Justices offices and the conference room, to which she replied that she couldn’t recall it ever happening before! We were all extremely grateful for the hospitality that Justice Wynne showed us while teaching us an immense amount about the ins and outs of the Supreme Court of Arkansas.

During the last portion of the tour we dressed in black robes and acted as Justices of the Arkansas Supreme Court. The tour of the Supreme Court of Arkansas was an amazing way to learn more about the court system, and left us all in awe of how great of a time we had while we were visiting. Once everyone had their turn banging the gavel, it was time to go onto our next adventure.

Our next adventure was the Arkansas Arts Center.  Although  not as large as the major Art Museums, they have a nice permanent collection, much of which was donated by the Rockefellers (Winston Rockefeller was Governor of AR in the 1960s).  The collection contains works by Miro, Picasso, and Monet…

This time, however, the real treat were the special exhibits.  One featured the photography of Dortothea Lange, the photographer who captured the Great Depression and the plight of the migrant workers so perfectly.

Another exhibit featured the work of Charles Burchfield, who focused on the mixed blessings of urbanization. 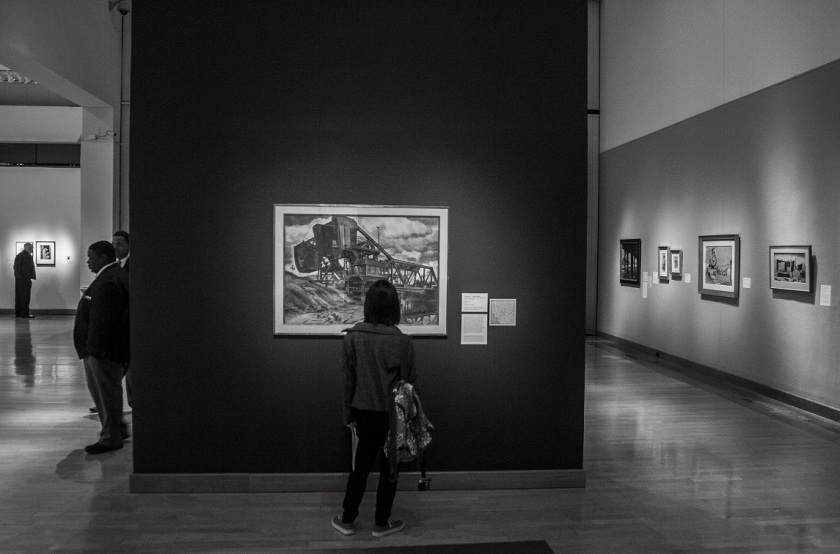 Both art collections were created near the same time period, but they were very different in medium and subject matter. Charles Burchfield’s art depicted “Industrial Beauty” using watercolor paints. Black Iron, the exhibit centerpiece, was inspired by the port of Buffalo on Lake Erie.

According to the exhibit, Burchfield saw the bridges as part of an industrial complex spewing poisonous chemicals into the river; yet he found the massive structures irresistibly beautiful.” The paintings and drawings used darker colors to convey emotion.

Dorothea Lange is known for her black and white photography during the Great Depression Era. Each photograph captured emotion that strikes viewers immediately. Her works had great impact on legislation during the time period and even in the way films depicted people of the Great Depression Era. One of her most famous photographs, Migrant Mothers, was showcased along with a variety of other photos that were new to many of us. 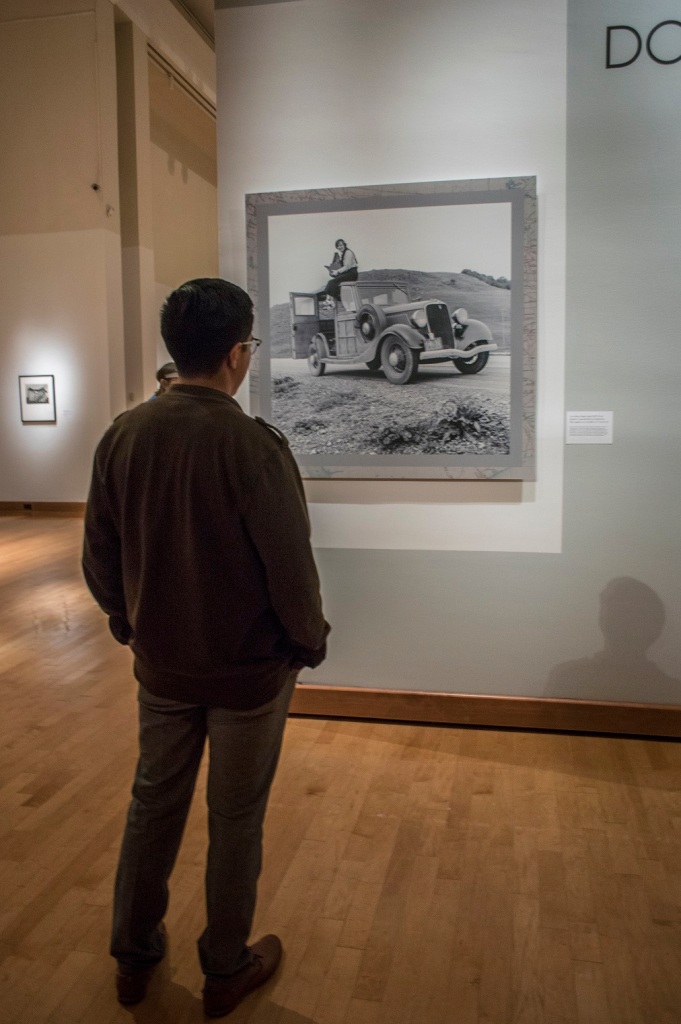 Each person left with a favorite photo from her collection.

A third,  smaller special exhibit featured the work of Nathalia Edenmont, who makes dresses from flowers and other produce. 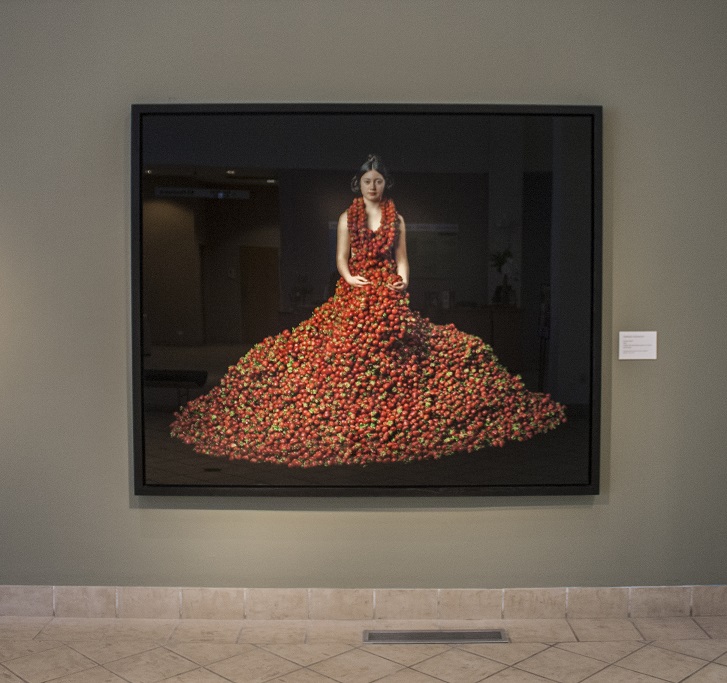 This theme tied into a discussion Megan and I have had in our art class, which revolved around the question of whether the Ag Department’s “Floral Design” class should be considered an art class.

The Arkansas Arts Center was the perfect place to learn about a large variety of art because it explained the distinguishing characteristics of each genre. The art ranged from small, detailed, and complex paintings to intricate, colorful, and sometimes puzzling statues.

Lunch was a treat for us avid meat-lovers as we decided to fill our stomachs at The Whole Hog Cafe, a LEAP Center tradition. Catering a country style atmosphere while offering a variety of award-winning meat (as indicated by the line of trophies displayed near the entrance of the cafe), we knew we were going to be satisfied! To get the most out of our experience, we ordered three plates of The Ultimate Platter, which consisted of pulled pork, beef, chicken, ribs as the main course, and coleslaw, beans, potato salad, and rolls as sides.

Enhancing the overload of finely cooked meat were the six diverse choices of barbecue sauces, ranging from sweet to spicy to slightly tangy.

Each sauce was unique and each person had a chance to pick a favorite. The top three according to our collective preferences were Sauce No. 1 (sweet, mild, molasses flavor), Sauce No. 3 (spicy, traditional tomato, vinegar flavor) and Sauce No. 5 (sweet, heavy, molasses flavor) tied for 2nd place, while for third was Sauce No. 2 (a less spicy version of Sauce No. 3). We also indulged in the best (according to Alex) chocolate brownies for dessert. The service, the platter, the BBQ sauces and the fun conversations that filled our table made for a great experience at Whole Hog Café. 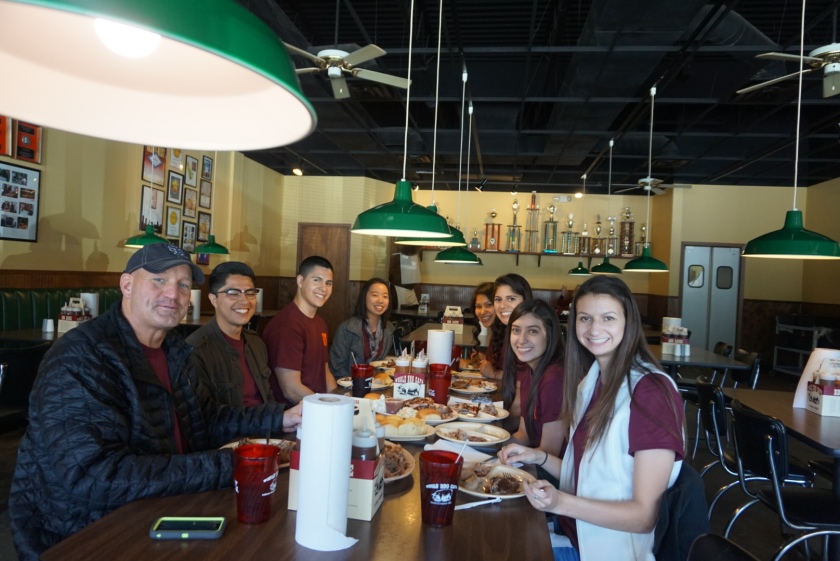 Volunteers from the LEAP Ambassadors assist the WCRP with the Reagan Dinner, where they met an impressive array of community leaders. Read about their experience here: https://leapatshsu.com/2021/05/12/reagan-dinner-2021/