After a morning of art and aquarium life in Corpus Christi, we set out for the Valley.  The night before, we went to a baseball game–Alex’s first.  Tonight, we stumbled upon a bowling alley next to our hotel in Weslaco, and decided to play a couple of rounds–our first in a very long time!

Beatriz Martinez, LEAP Ambassador and valley resident, joined us for the bowling game.

It had been a while since any of us had bowled so we knew it would be…interesting. All of us bowled pretty well the first game, which Megan won the first game–showing exquisite form. 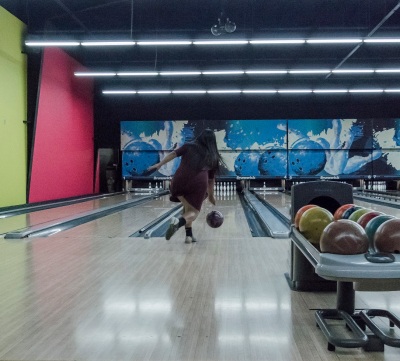 Our second game, however, showed a marked dropoff among everyone except for Professor Yawn, who seemed energized by his loss to Chapa in game one.  In fact, he thinks he bowled his best game ever. He won after posting nine strikes (!)–while the rest of us spent significant time nursing sore arms from our efforts in game one.

It was a fun time filled with both embarrassing and proud moments!

Happy to say all of us made at least one strike!

For dinner we tried a highly recommended restaurant named Arturos.   We started off with Queso Flameado with tortillas and Avocado Pico de Gallo that we enjoyed while waiting for our meals. Megan ordered Tacos de la Calle, which she said had amazing fajita meat; I ordered something that I had never tried before, Enchiladas Suizas, which were chicken enchiladas topped with tomatillo sauce and oxaca cheese. Beatriz and Professor Yawn split the Special Mexican Plate that allowed them to taste a little bit of everything. We then had Tres Leches Cake and a Caramel Crepe for dessert.

With the bowling and the food, it was a sweet (and spicy!) way to begin our time in the Valley!