With the conference part of the trip over, we embraced the more relaxed portion of the trip by learning of Oklahoma, strolling through luscious gardens, and venturing into the icy realms of ice skating. First however, we drove a few miles off of downtown looking for the capitol building.

As we reached the domed structure, we admired the artwork surrounding the capitol building… 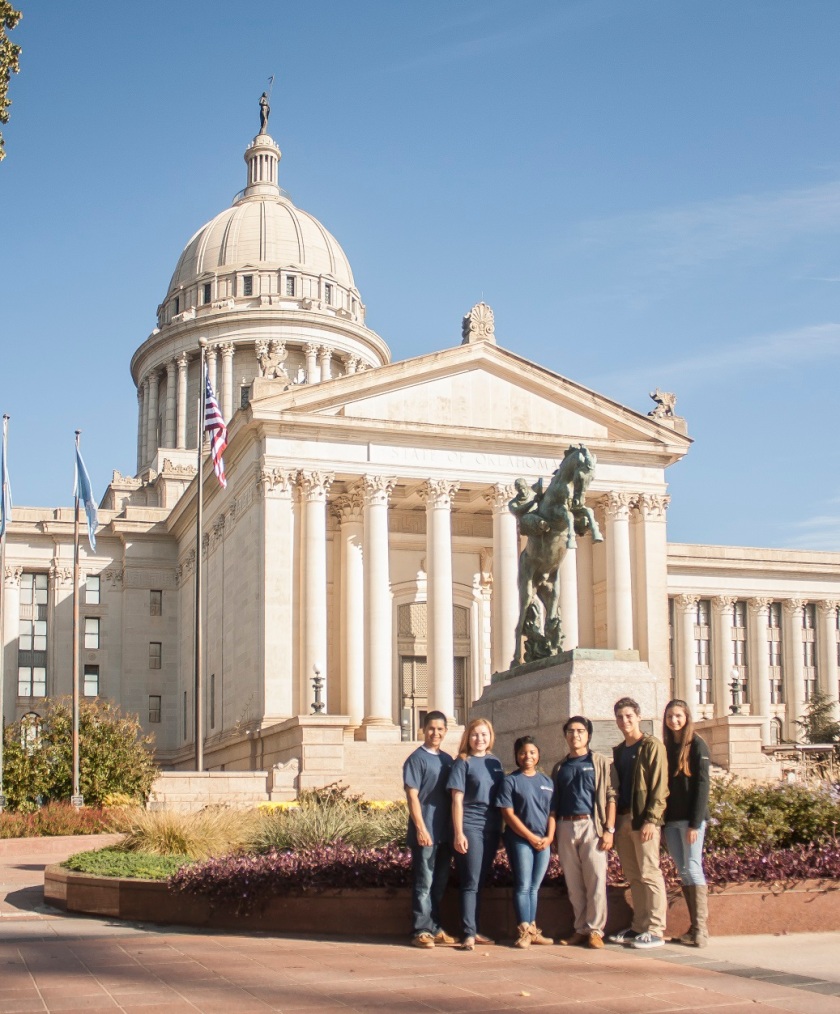 …and then wandered inside the massive structure to find a large construction zone.  Unfortunately, the visitor’s center was closed because it was Veteran’s Day, so we proceeded through the capitol exploring on our own. We started on the first floor admiring the rotunda and the State Seal of Oklahoma. The state motto of Oklahoma: “Labor Omnia Vincit” (Labor Conquers All Things) was beautifully showcased within the seal and the dome was impressive as well. 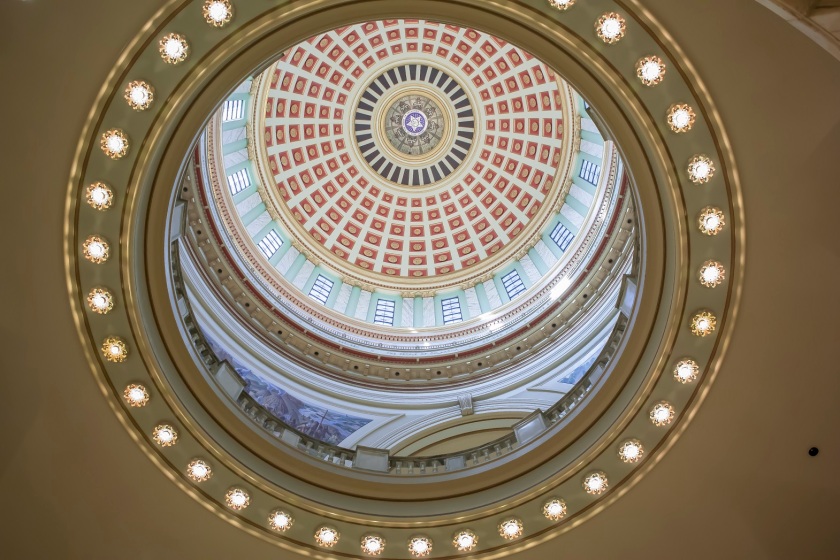 A short distance away, we visited the Senate Chamber. The House of Representatives was closed today, but we still learned about the organization of the legislature. We made the best without a tour guide and enjoyed our morning of exploration!

Embracing the Okie spirit, we continued our Oklahoma City tour by visiting the National Cowboy & Western Heritage Museum. As we crossed the front entrance, our sight was instantly drawn to the end of the hall. Against a magnificent window wall, filtering a warm sunny glow, stood a colossal Indian mounted on a horse both carved from white stone which embraced the outside light.  With a look of defeat and a horse at mid-stop, James Earl Fraser was able to sculpt his subject’s vanquished spirit in “The End of the Trail.”

We posed for a photo with Fraser’s work…

We actually got a second photo with the sculpture as well.  Our trip-themed t-shirts feature the Fraser piece, so we have our backs to the camera to make that connection…. 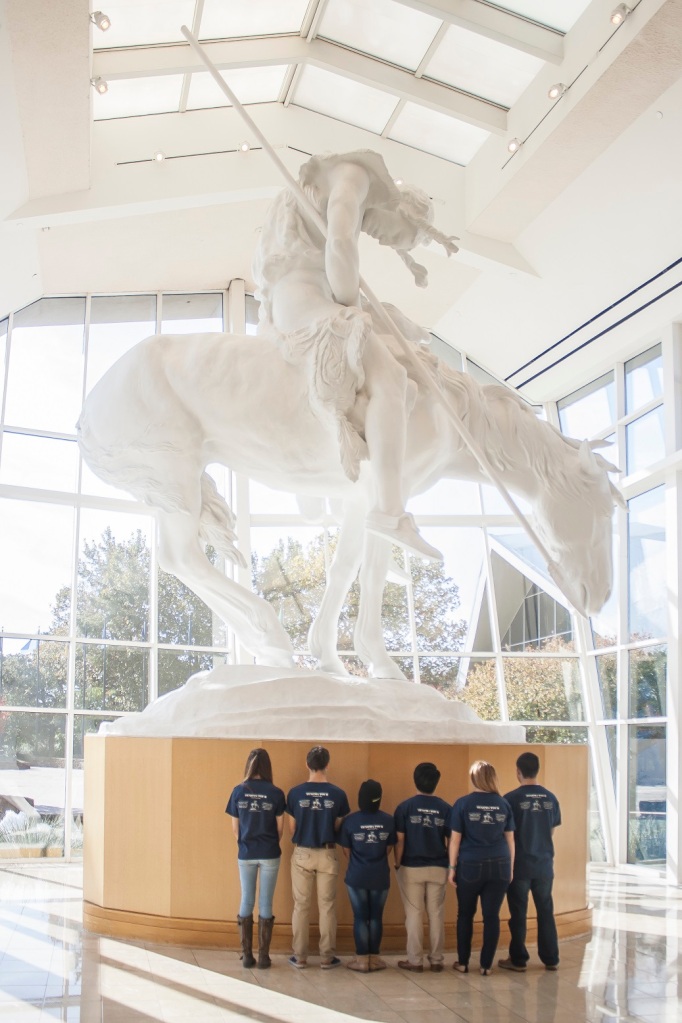 Fraser’s talent was also evident in his Lincoln sculpture which stands overlooking the main hall from his east wing repose.

Following the scope of his solemn gaze pointing westward, we trailed down the west wing of the museum as searchers of the Western Performers Gallery.

Upon entrance to the gallery, we were greeted by the awe-striking statue of none other than President Ronald Reagan (a former western movie actor). 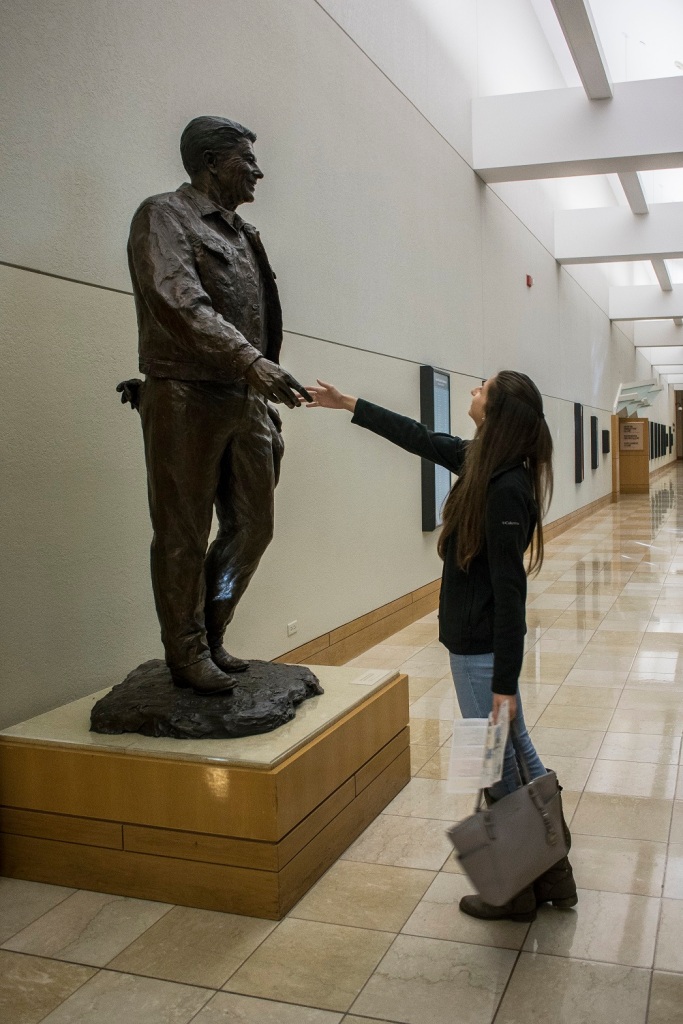 As we ventured into the exhibit, a distinct jolly smile caught our attention. Nearing this Norman Rockwell portrait, we rejoiced as we had found the gallery portion dedicated to the acclaimed Walter Brennan.

Along with him, other great western actors were commemorated such as Gary Cooper, Barbara Stanwyck, Harry Carey Jr, and of course, the immortal, John Wayne. 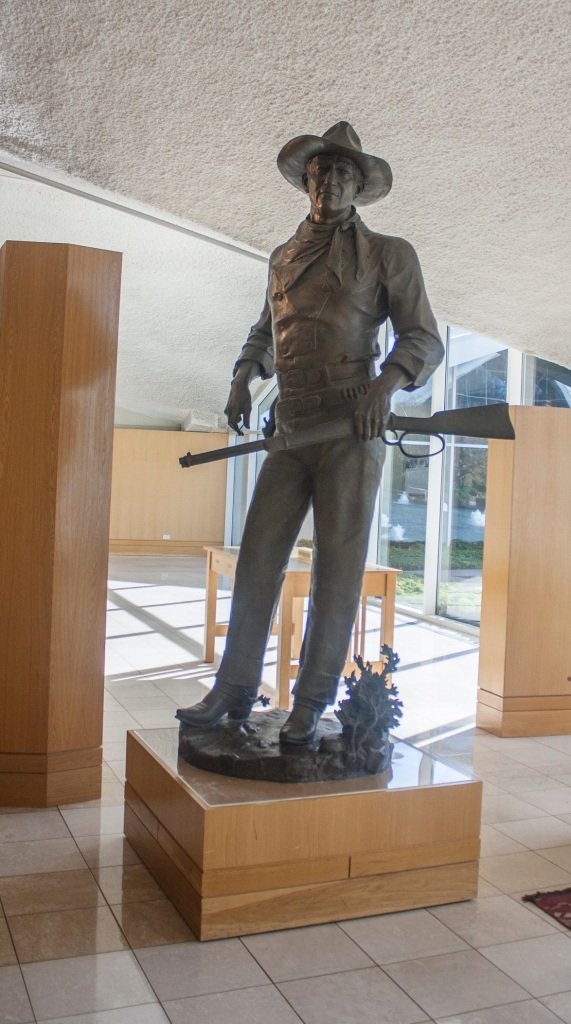 But from western inspired performers to true performers of western legend, demonstrated by exhibits on taming conquering of the west, Native Americans, and even a small scale Old Western town (akin to a film set), the museum was filled with inspiring artifacts of the west. Our only regret was that we had not much time to look through the entire museum, but our expedition had to move on as the Myriad Botanical Gardens awaited us… 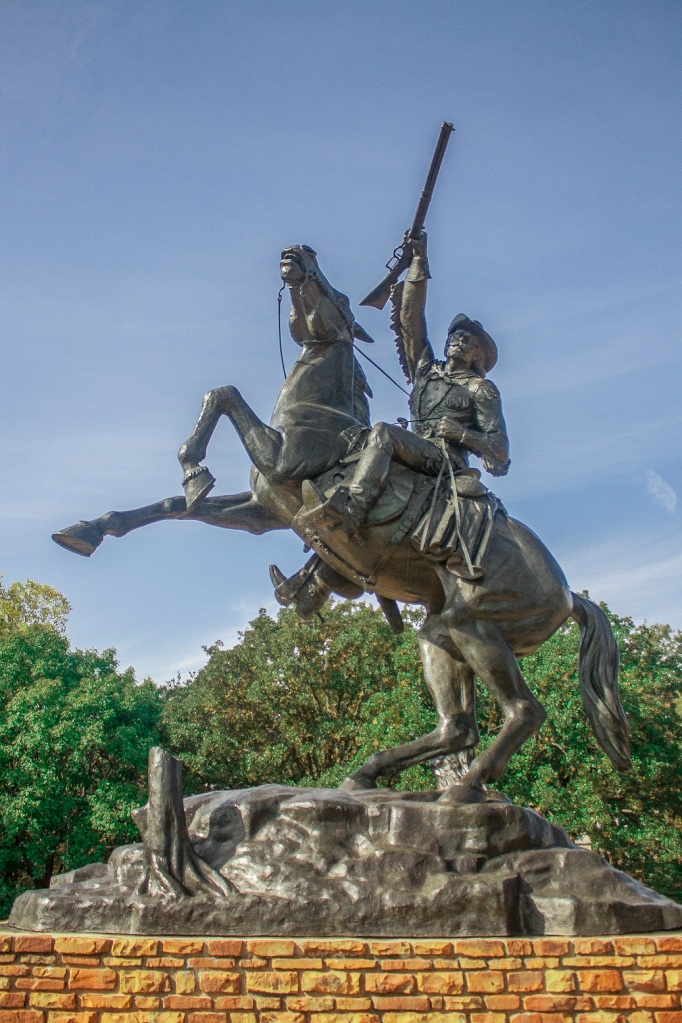 It’s not every day that we get to experience a mini-tropical paradise in the middle of Downtown Oklahoma City, but the Myriad Botanical Gardens gave us just that opportunity. Entering the greenhouse, we were greeted with a large variety of foliage…

…and the sound of a rushing waterfall, much like an oasis in the middle of the city. 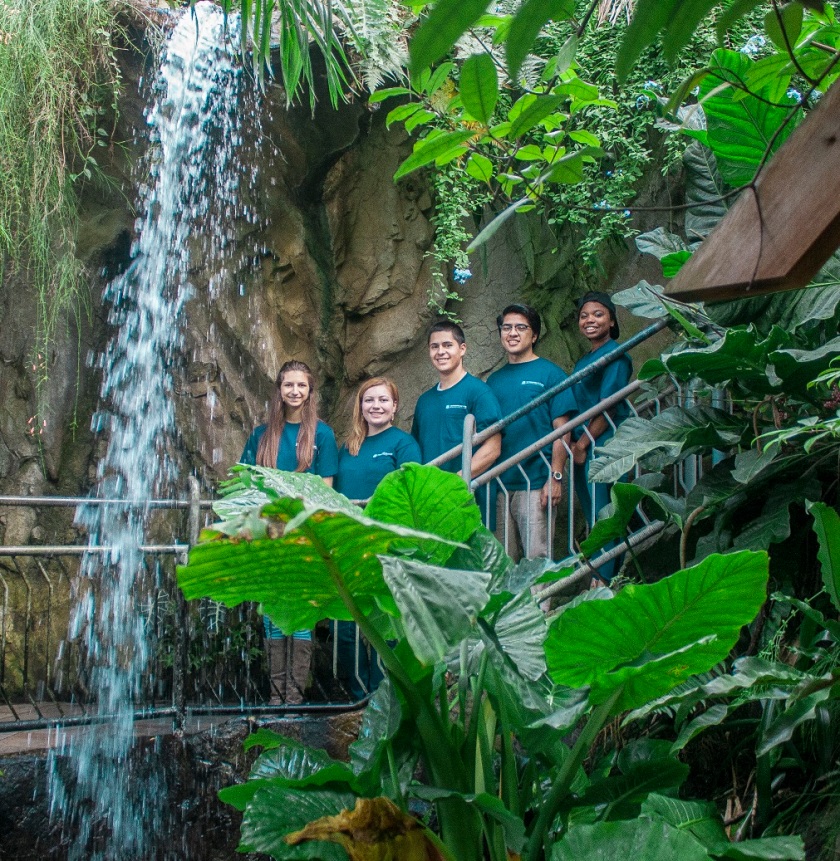 Like explores trailing through the jungle, we discovered many new plants and even encountered plants that smelled like goods such as root beer and cinnamon!

For some, true delight came in discovering the wildlife inside the greenhouse and around the Garden property. Inside we discovered butterflies, finches, a parakeet, and even a very friendly, talkative parrot. 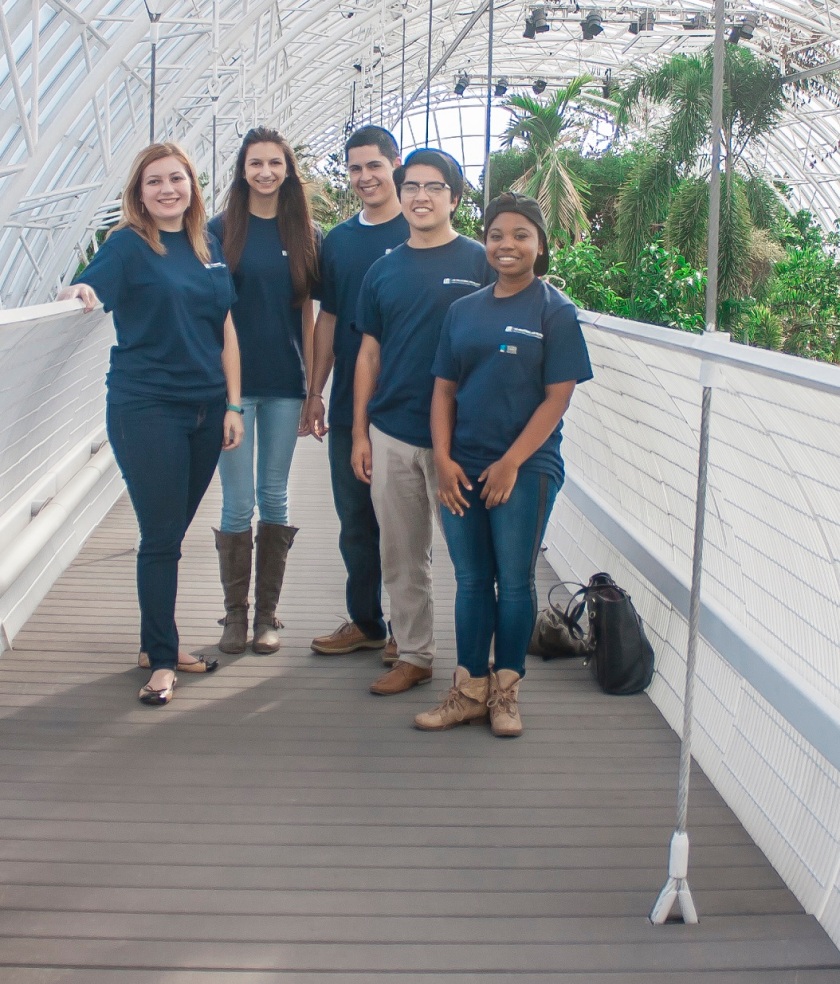 …we stepped outside onto the grounds where we had the opportunity to watch swimming koi and a variety of waterfowl, including some of our neighbors (Canadian geese), as well as pose near the foliage. 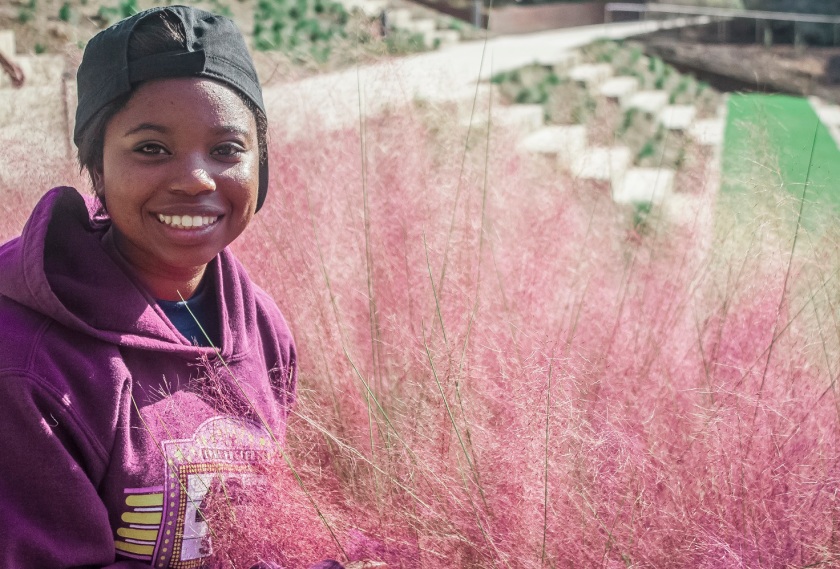 We were so grateful to take a few moments to enjoy the beauty and peace of nature in the midst of our busy day.

But after the botanical stroll, we synchronized our watches and bid Mitchel, Sadie, and Ashley goodbye, as they would go their own way and tour the Oklahoma City University School of Law.

Before we began our tour, we first had to be dropped off on the Oklahoma City University campus. On our way into Sarkey Building, we discovered that our tour would be held in another part of town where the law school was located. Fortunately we ran into Dr. Farmer, the chair of the Oklahoma Political Science Association conference, who was generous enough to drive us downtown to the School.

Upon the completion of our short trip we were greeted by Lisa Lee, Administrative Assistant for Admissions, as she took us to the admissions center where the tour began. Billy Thomas and Zac Morgan, L3’s (3rd year law students), led the LEAP group (composed of Ashley, Sadie and Mitchell) on the informative tour across campus.

Along with Dr. Farmer, other professors that had attended the conference also joined our tour group. As we learned, the building was built in 1910 and was one of the first high schools in the state of Oklahoma. Walking through the grand rooms and halls was a treat, especially when every step was filled with the state of Oklahoma’s rich history.

The historic importance of the building was put into perspective when Mr. Thomas informed us of the building’s role after the Oklahoma bombings. The FBI used the building to head all rescue operations for the disaster. It is impressive to note that the building was undamaged after the bombing but for a few windows that were shattered. Mr. Morgan and Mr. Thomas then took us by the headquarter for the Innocence project. It was a pleasure to actually see the inter-mechanisms of the project, observing the busy law students studying papers and files. We toured the library along with an overview of the research tools available for students.

We also had the privilege to visit the J. William Conger Courtroom.

To finally wrap up the tour we viewed a couple of class rooms which were from 25 seat to about 70 seats. The classroom size was very similar to the rooms at Sam. We made our way back to the admissions center where we had final discussions with Lisa, Billy and Zac about the school and Oklahoma City itself. The tour gave us great insight to the law school, university, students and Oklahoma City.

With some ambassadors touring the Law School, others headed over to the Oklahoma History Center to learn about the diverse subject matter relating to the state of Oklahoma. Upon entering, the gleam of Wiley Post’s airplane (which hung from the ceiling) greeted us better than any friendly smile. 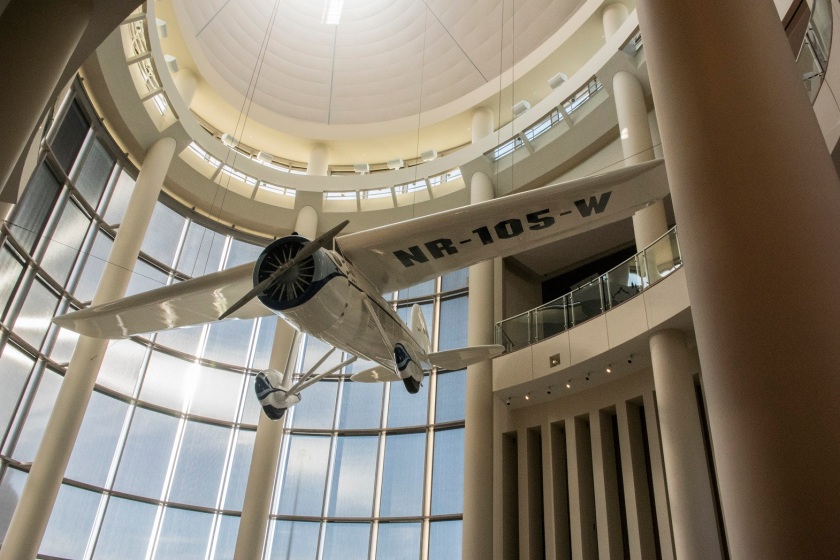 Wiley Post, an Oklahoman, was one of the first pilots to experiment with flight, but ultimately crashed near Alaska where him and acclaimed Will Rogers died. Due to Post’s contributions to space travel, developing a pressurized suit that would serve as the prototype for those worn by astronauts, part of the first floor was dedicated to Oklahoma’s connection to the Space Program. After glancing at the interstellar artifacts, the LEAP Ambassadors transitioned to the first exhibit covering the different Native American Tribes. The exhibit taught us of their culture, homes, careers, languages, and traditional clothing. We were thankful that the museum provided a unique way for us to learn about Native American culture.

Upstairs, we were greeted with a beautiful Allan Houser sculpture of an Indian woman. Earlier this morning, we saw his work outside the Oklahoma State Capitol. His works are prominent across the state for their beautiful depiction of Native Americans. It was neat to see his artwork in two places within the same day!

The next exhibit walked visitors through the history of Oklahoma starting with the era of the Sooners and ending with a then and now comparison of various qualities of everyday life such as life expectancy, income, and population. 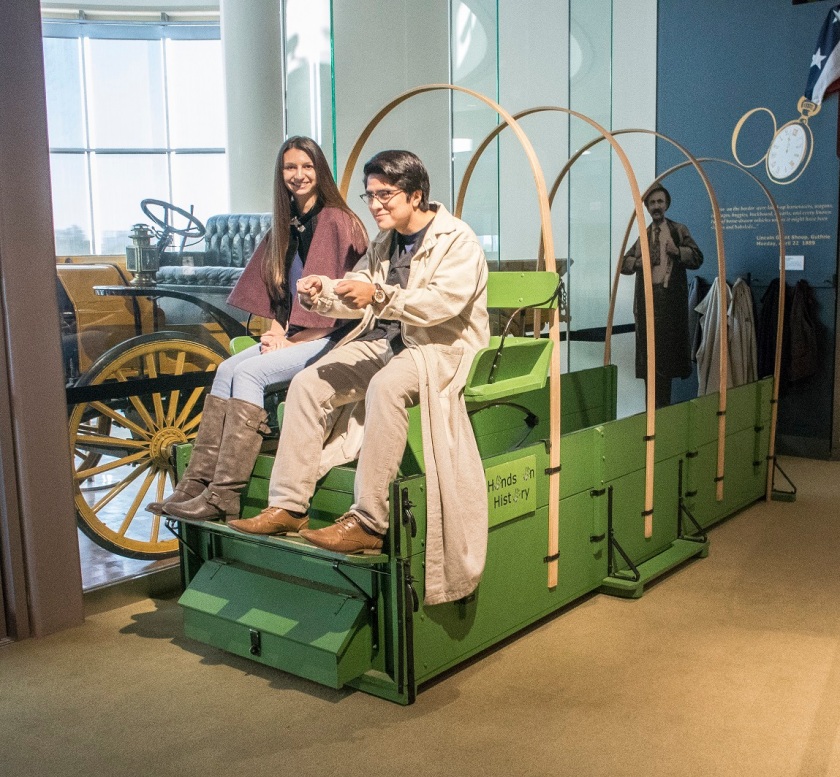 The exhibit was comprehensive because it covered the political and cultural history of Oklahoma. Observing the various artifacts of the state’s history, we found ourselves running out of time as we were in need of picking up our fellow LEAP comrades. After a short trip to the bookstore, we traveled back to regroup with our fellow LEAPsters and continue on with our afternoon. Although our tour was short, we enjoyed learning more about the history of Oklahoma!