In 1879, one of the greatest Texas universities was established to honor one of Texas’ greatest heroes. In 2017, current and former Bearkats traveled to Austin to pay tribute to this great hero, General Sam Houston. Even though his date of birth is March 2nd, we decided to party a little early. On February 28, a grand celebration was held in Austin to commemorate Sam Houston’s birthday.

Early that day, SHSU alumni banded together to visit fellow SHSU students that are a part of the Sam Houston Austin Internship (SHAIP), bearing gifts for their offices in the true Bearkat-giving spirit. In total, there are 10 different SHSU interns working in different offices: Alejandra Galvan with Senator Kolkhorst, Beatriz Martinez with Representative Armando Martinez, Christina Perez with Representative Jim Murphy, Brian Aldaco with Representative Will Metcalf…

Later that evening, the SHSU Alumni Association sponsored and hosted a reception to invite Legislators and their staff to join in the Bearkat celebration at the Austin Club. Guests included SHSU professors and staff, Texas State University System (TSUS) Regents, administrators, legislative staff, and legislators. The LEAP Ambassadors had the pleasure of meeting with former-Speaker of the Texas House of Representatives Gib Lewis…

Fur us, it was a lot of fun, one of the most pleasant events in which we participate.  In addition to the Austin interns, Professor Yawn brings in volunteer students from SHSU to assist the President’s Office and the Alumni Association.  Several of these students were selected because of their promise as future Austin interns, and it’s a chance for them to meet with the current Austin interns and learn more about the expectations and responsibilities of the job.

As guests mingled, President Dana Hoyt spoke to the audience, thanking the guests for attending. She shared some “fun facts” about SHSU, including the University’s retention rates in school districts around the state; employment rates for Bearkats; and rankings of various departments in SHSU.

And Chancellor Brian McCall spoke, illuminating some of the accomplishments of SHSU and the entire TSUS system. 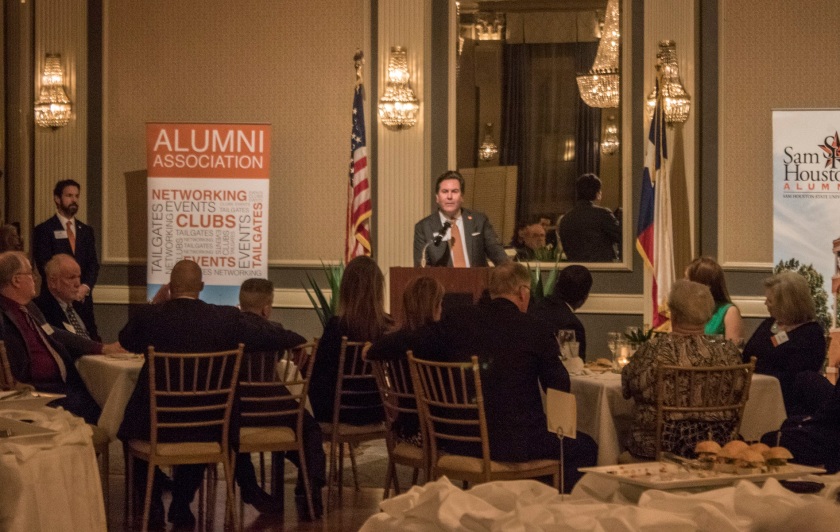 As a Ph.D., a former Representative in the Texas Legislature, and as Chancellor, McCall has a unique perspective on realistic goals and the means to achieve those goals.

It was a fun event, with SHSU freshmen and sophomores serving as volunteers; Austin interns who are mostly juniors and seniors; and alumni on hand.  It was a great chance for Bearkats of all generations to spend time together and with legislative staff.

As a freshman and new student to the LEAP Center, I was fortunate to volunteer at this fun-filled event.  After driving from Huntsville to Austin in the early afternoon, we arrived at the beautiful Austin Club. One of our main tasks at the Sam Houston Birthday Celebration was to hand out name tags.

Attendees of the event included The Board of Regents, Chancellor Brian McCall,  LEAP Center ambassadors, Austin Interns, SHSU alumni, Texas legislators, and University faculty. While handing out name tags, we had the opportunity to meet many of these individuals in a short amount of time. Once the event started, we were able to mingle and network as well. I took this time to also chat with the Austin interns about their experiences working at the Texas Capitol. They provided valuable insight to what the internship was like as well as advice for what I can do now to prepare for the upcoming session in 2019.

My favorite part of the event was getting to meet Mike Wintemute, the Executive Director of the TSUS Foundation. As a student interested in pursuing a career as a communications officer or press secretary, I greatly enjoyed learning about his background and job opportunities in this field.

But the whole evening was wonderful, and it was a great opportunity to meet senior students, alumni, legislators, and staff, all of whom went out of their way to make the evening enjoyable for the novices in the crowd.

The LEAP Ambassadors would like to thank President Hoyt, Charlie Vienne, Charlene McWilliams, Riley Kleppelid, and Meagen Korenek for including us in the event.