It was overcast and intermittently rainy, but the inclement weather didn’t hamper any spirits as the always-roving LEAP Center left Huntsville with a group of special guests, bound for H-Town on Saturday morning, March 11.

We were on course for a cultural excursion to the Asia Society – Texas Center in Houston’s Museum District.  LEAP Center Director Mike Yawn drove our group, consisting of 11 students from China studying criminal justice here at SHSU, for a short trip to see, appropriately enough, the efforts led by former First Lady Barbara Bush in the late 1970s to “educate Americans about Asia and to forge closer ties between Houston and the peoples and institutions of Asia.” (http://asiasociety.org/texas/mission-history)  Several of this cohort of Chinese students are taking two sections of Texas government this semester, in classes taught by professors Mike Yawn and Gene Roberts.

But before reaching  the Asia Society, we started our time in Houston with some southern Asian food at Aga’s Restaurant & Catering, specializing in Indian and Pakistani cuisine.  The table started out with appetizers of keema samosas (beef-filled pastries) and vegetable samosas, and garlic and “bullet” naan (flavored with cilantro and jalapeno).  Individual dish selections stretched from chicken curries to beef kebabs to goat chops.  And a lot of rice.  “That’s ok,” said one of the students to laughter, “we really like rice.” No one was up for trying the Brain Masala dish, though it was discussed around the table.  Everyone enjoyed trying out the new fare, with one more adventurous eater taking on tasting of all the spicier dishes (“More water, please!”), and especially the cooling, complimentary pistachio kulfi (ice cream) that the house provides to all Aga’s first-timers.

The rainy weather had ramped up, but with front-row parking, we made it into the van and got on the road to the Asia Society with little trouble or traffic, arriving in time to wander around for a few minutes before one of our two scheduled tours, the first one focusing on the architecture of the building. With the rain pounding, we didn’t spend time outside looking at the building, designed by Japan-born, Harvard-educated Yoshio Taniguchi, who designed the building to “marry” east and west.  Our docent mentioned that he chose materials and design to blend the building into the neighborhood, and in fact, one of our group remarked that it did seem much more spacious inside than it appeared from outside. 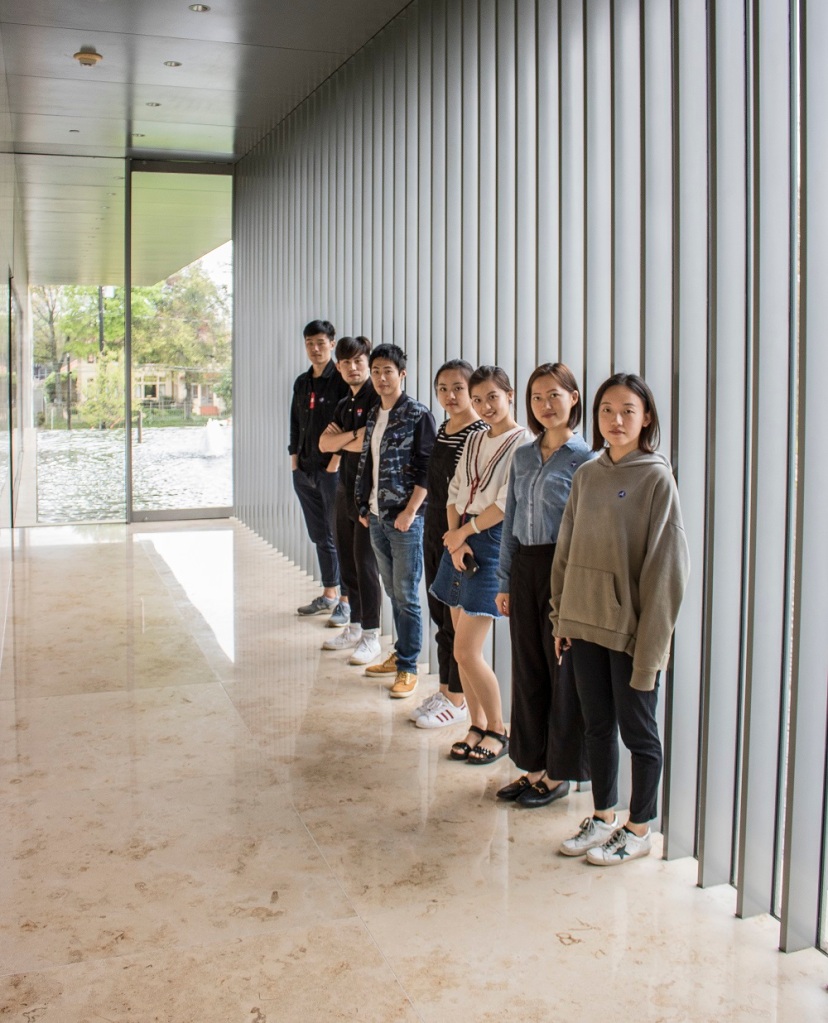 The Society rents each of its spaces as private venues for events, and in fact a wedding was scheduled for that Saturday evening.

We wandered the building, hearing about the various materials (jura limestone, basaltina stone, cherry and Appalachian white oak woods, and much glass) used in the construction. 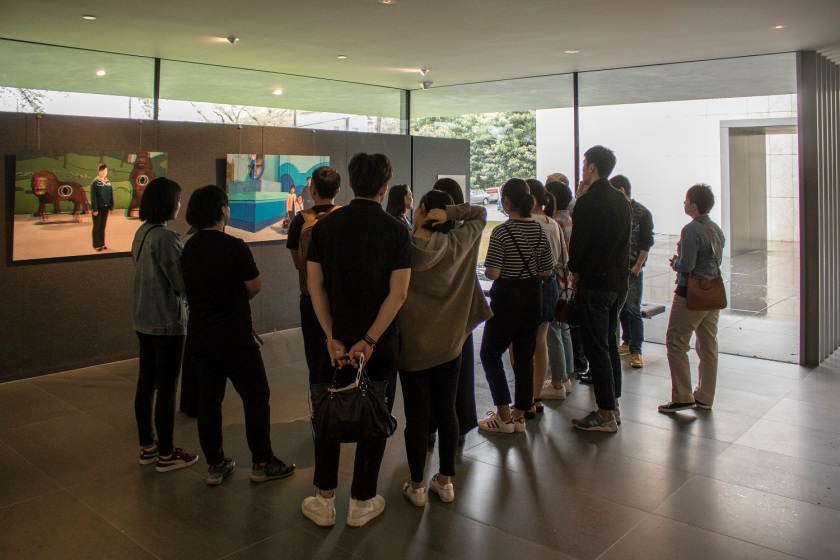 The tour guide pointed out in each room the way that Taniguchi had lined up each of the “grout lines” across materials and throughout the building, and made special note of the two “floating” staircases to the second floor. 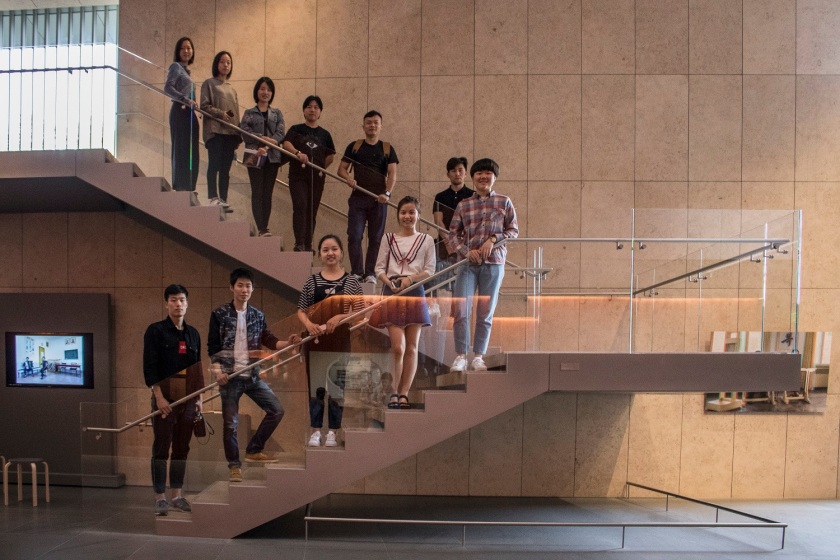 We wandered through the North Gallery and the Fayez Sarofim Grand Hall, noting the materials and the current exhibit.  The Brown Foundation Performing Arts Theater was a huge hit, especially when we asked – and were granted – the opportunity to go onto the “spring” stage.  The Edward Rudge Allen III Education Center overlooks the Green Garden, with jasmine, ivy, and bamboo, of course. 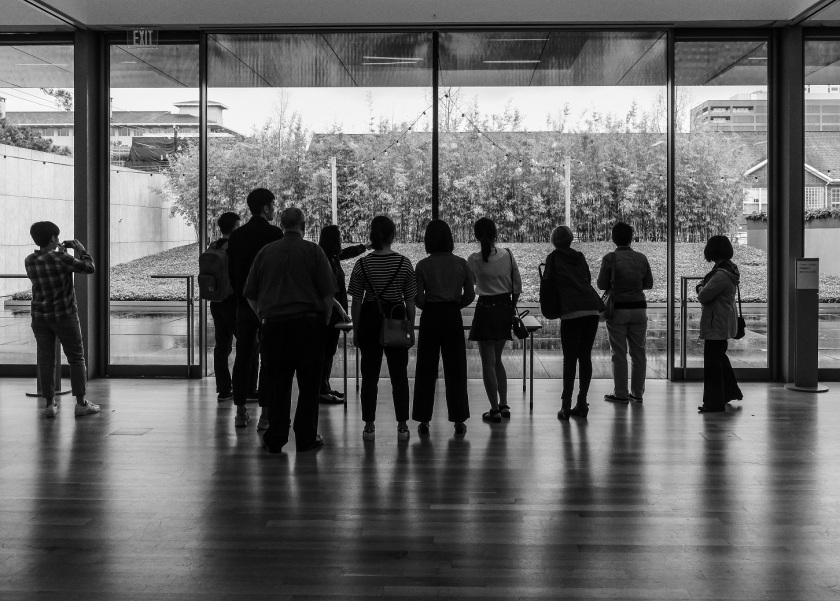 The Water Garden Terrace was most impressive, with a full floor-to-ceiling wall overlooking an infinity pool with a periodic vapor element. 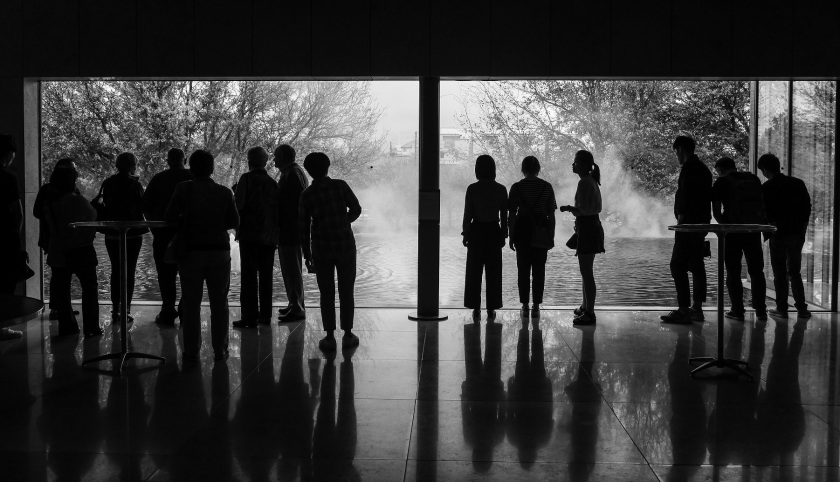 The second tour focused on the art of the Asia Society.  The current exhibition hanging in the North Gallery and the Grand Hall on display only until March 26 is DPRK: North Korean Portraits by Slovenian photographer Matjaz Tancic. 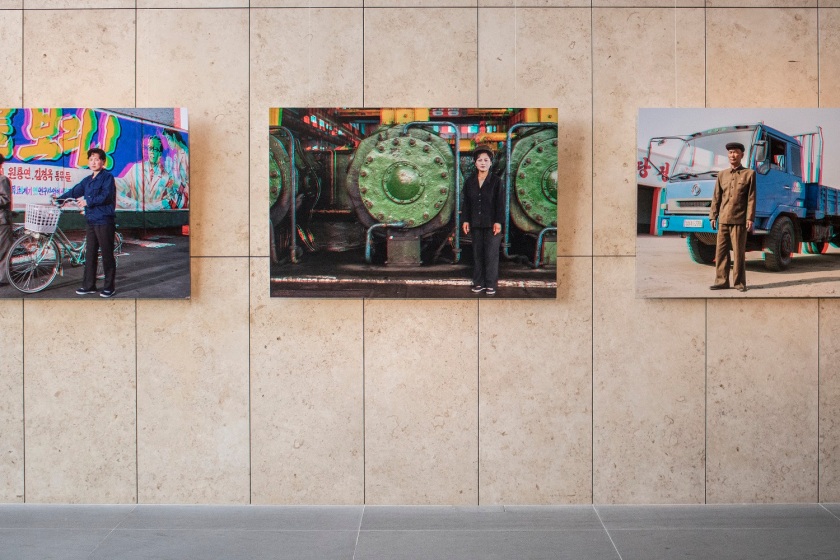 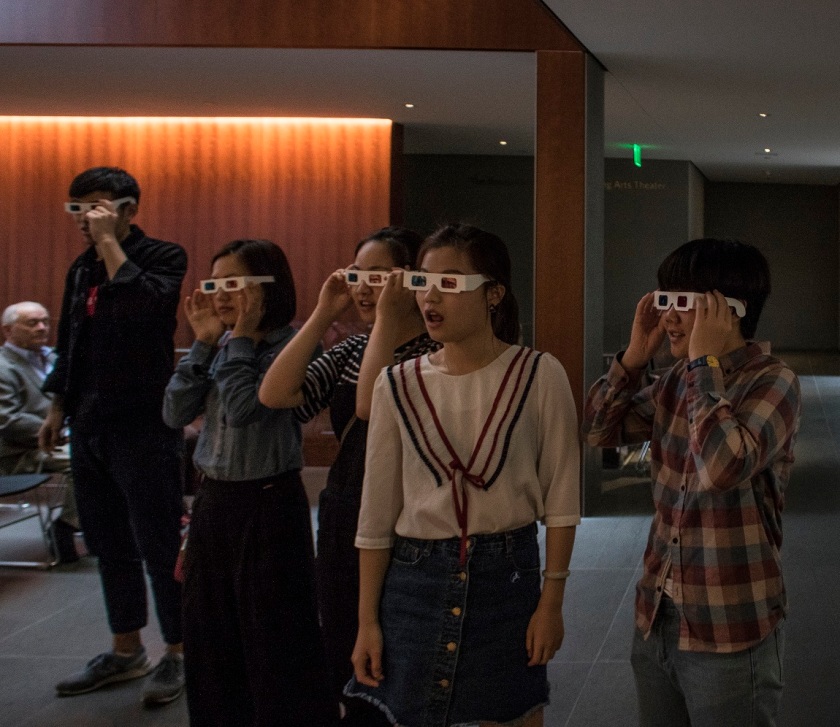 …as our guide discussed some of the difficulties the artist faced in photographing in North Korea’s capital city of Pyongyang, and pointed out a couple of the artists favorites. 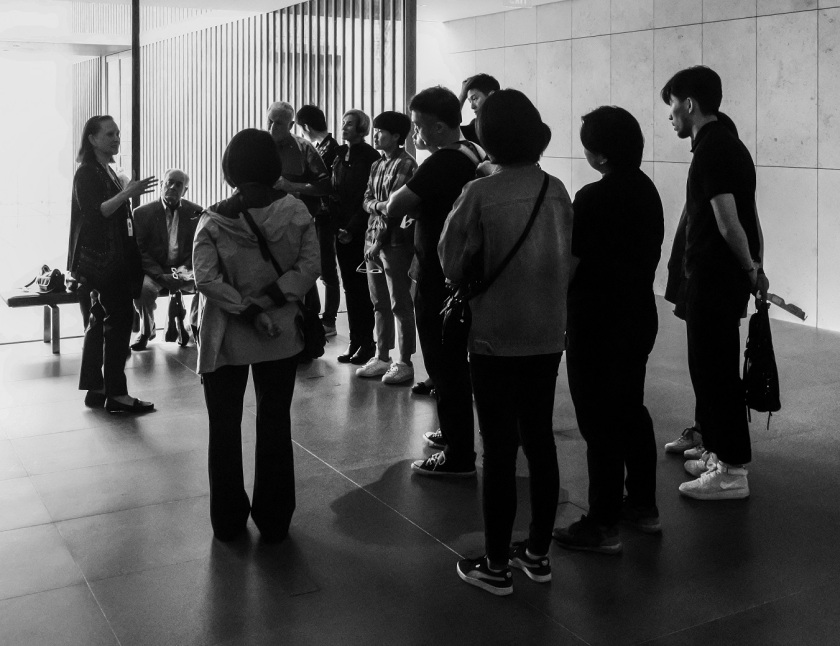 But the majority of our time was spent in the main gallery, learning much about bamboo at the Modern Twist: Contemporary Japanese Bamboo Art exhibit. 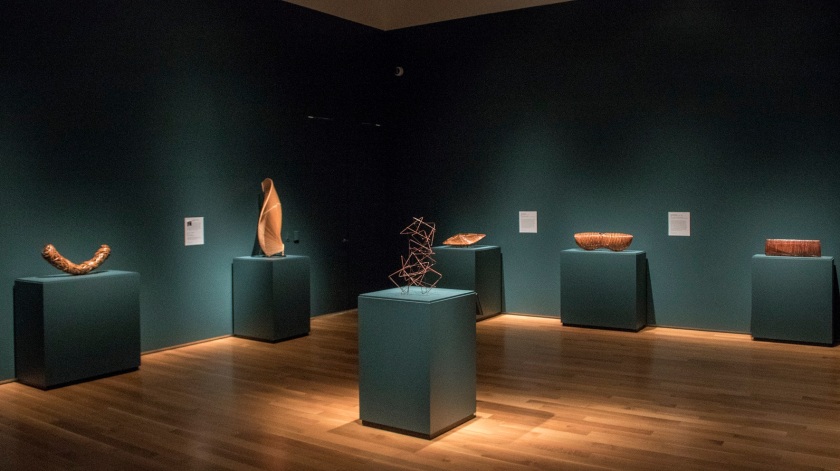 The tour guide discussed the various ways that bamboo is important in Asian culture, from eating, to wearing, to building, and in more recent time, as an art form. 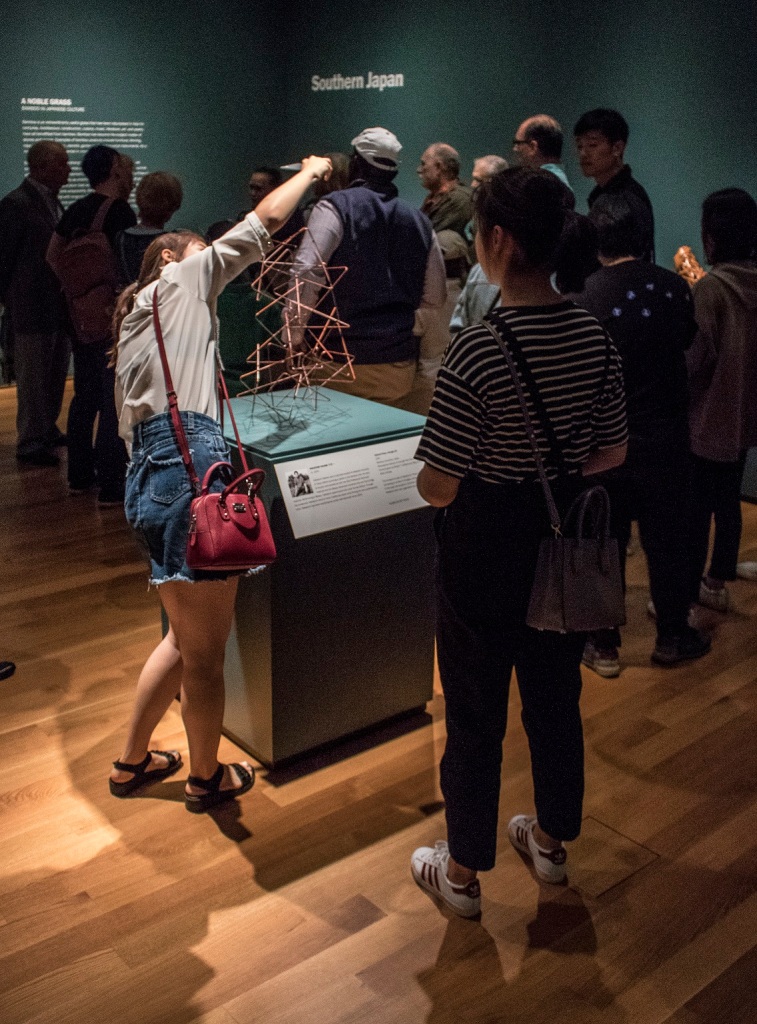 In fact, most of the pieces take months if not years to make, just as bamboo artists take decades to perfect their art, learning how to harvest the right variety (of more than 1700 species), splitting, braiding, and forming it into beautiful shapes and designs in addition to the more original, functional uses. 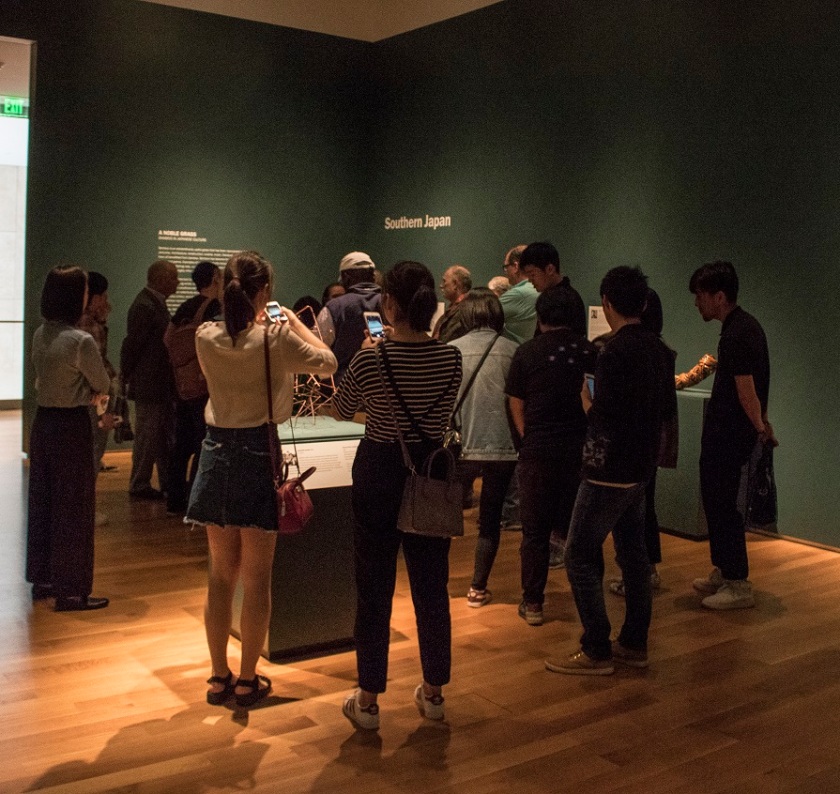 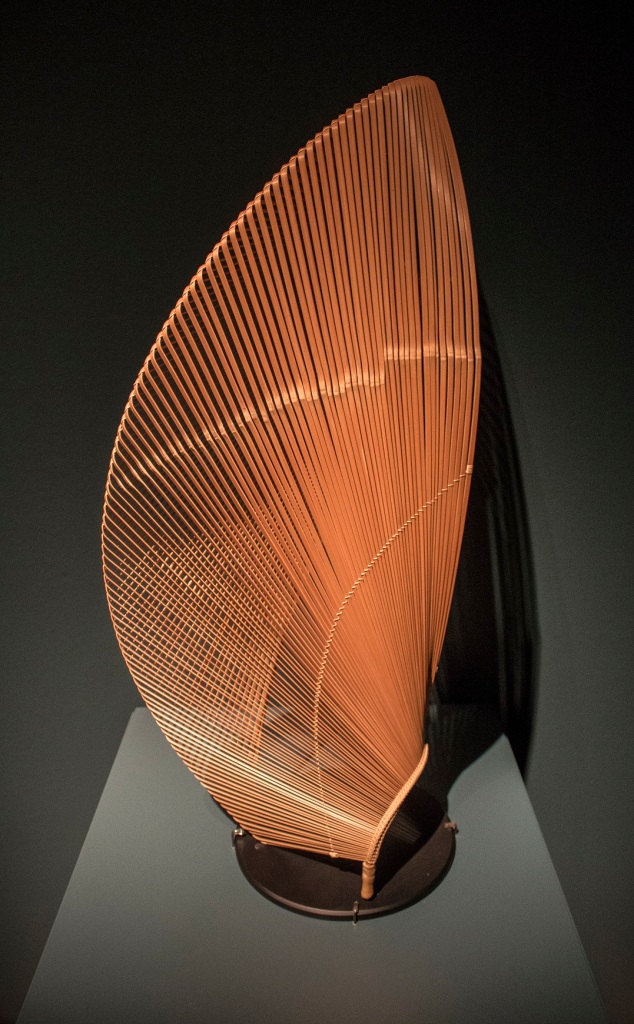 We stopped on the way back for a quick photo op at the We Heart Houston site on Interstate 10 at Thompson Street, the iconic sign designed by David Adickes, who has big ties to Huntsville… 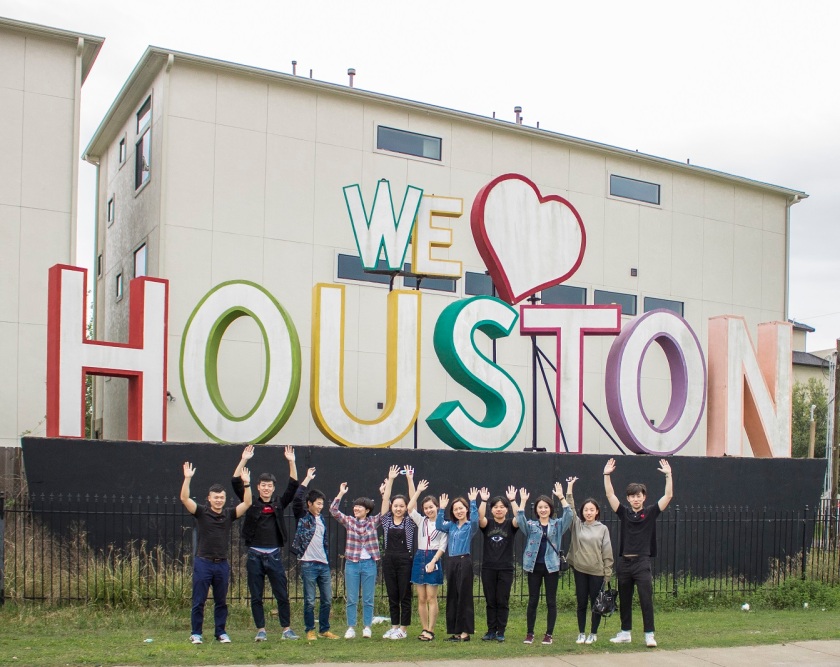 …most notably in the form of A Tribute to Courage, the 67-foot tall Sam Houston that welcomed us home to Huntsville.  Well, it welcomed those on the trip who were still awake…

We all had a good day, making new “international” friends, learning a few Chinese words, enjoying a new restaurant, and seeing the Asia Society – Texas Center from the insiders perspective. 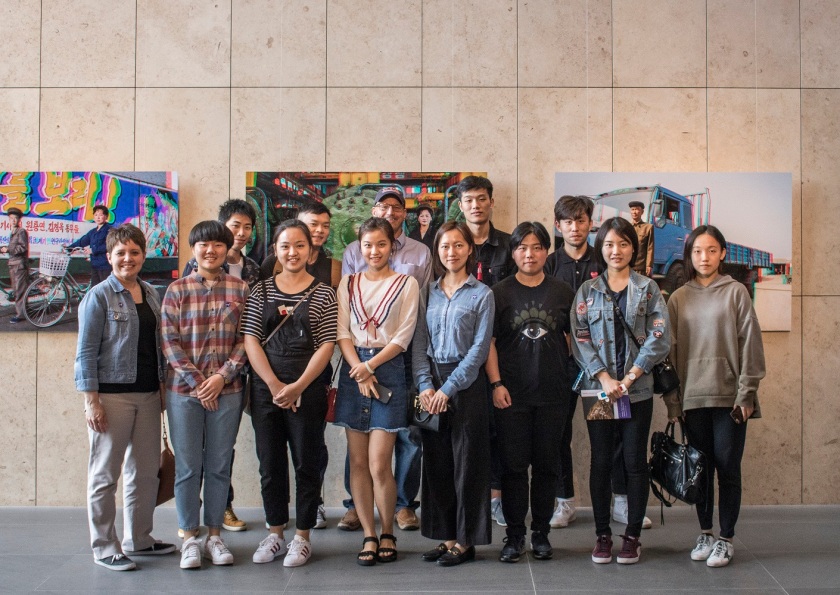