After an eventful week with our guest speakers, Mr. Glen Frankel and Dr. Carl Rollyson, we concluded their visit with one of the LEAP Center’s annual Film Festivals. This year’s feature film was High Noon, the acclaimed western classic starring Gary Cooper and Grace Kelly. Directed by Fred Zinneman and released in 1952, the film tells the story of a marshal (played by Gary Cooper)…

…who is getting ready to leave his hometown with his new bride (played by Grace Kelly) and begin a new life. However, his plans are thwarted when he learns that convicted killer, Frank Miller (played by Ian MacDonald), has been pardoned and is traveling back to town to seek revenge on the marshal who turned him in.

One of our guests of honor, Mr. Frankel, recently published his newest book on the film, “High Noon: The Hollywood Blacklist and the Making of an American Classic.”

After learning so much about the film throughout our week’s conversations, we were all enthusiastic to watch this Hollywood treasure.

With approximately 50 audience members composed of community members, SHSU faculty members, and students, the Wynne Home quickly filled up with gusts enjoying our pre-movie reception. Guests purchased the authors’ books and had the opportunity to visit with Dr. Rollyson and Mr. Frankel before they introduced the film.

Both authors had much to share with guests. Mr. Frankel not only has the expertise in film classics such as The Searchers and High Noon but has many stories to tell as a Pulitzer Prize winner for his journalism through the Washington Post. Similarly, Dr. Rollyson had stories to spare through his diverse biographical research. With subjects spanning from political figures like Michael Foot to Huntsville’s very own Hollywood star Dana Andrews, captivated guests enjoyed their conversations with Dr. Rollyson, just as they did with Mr. Frankel.

We were happy to visit with not only familiar faces, but also meet new faces to the LEAP Center. Two longtime community members were particularly special to us; Mrs. Bonnie Thorton Blalock and her new husband Mr. Ben Blalock. 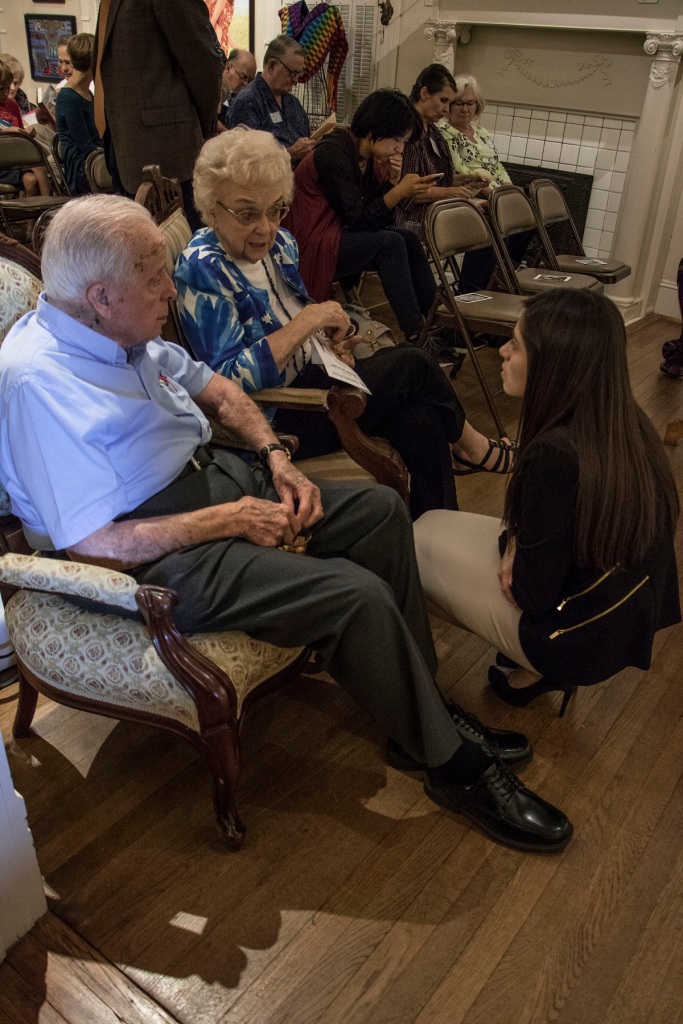 Mr. Blalock was the Mayor of Huntsville from 1968-1972 and Mrs. Bonnie Blalock was a long time librarian and teacher in the community. Both had wonderful stories to share and even offered to show us their recent wedding photographs! It was a real treat to visit with them and we hope to have them at future LEAP events.

But before we knew it, we had to wrap up our conversations and find our seats. The movie was about to begin.

As both Hollywood scholars finished offering their remarks on the film, the rumbling drums and the strumming guitar from High Noon’s introductory theme began to play. The 80 minute film went by quickly with audience members glued to their seats, anxious to find out the outcome of the film.

Afterwards, guests visited and discussed their thoughts before the LEAP Ambassadors headed next door to Carboneros for dinner. SHSU’s Dr. Darren Grant and Mrs. Marcie Grant even joined us making the evening more memorable.

We were thankful to have time to visit with Dr. Rollyson and Mr. Frankel before they left Huntsville. Many thanks to the Wynne Home, Mr. Frankel, and Dr. Rollyson!