On day 2 of our Austin trip, an even more exciting adventure awaited. Deep in the heart of Austin, lies a monumental building that every Austinian knows.

On a normal day in Austin, you can see the Capitol building from almost anywhere in the City. However, today was not one of those days. We walked through downtown Austin, in the dense fog, to get to our Austin Capitol where our legislators make laws.  For those in our party who had previously worked in the Capitol, they experienced a sense of nostalgia; for the rest of us, it was more a sense of wonder.  In the middle of the rotunda, we looked up to look up at the star centered in the middle of the dome, and we thought of our own dreams. 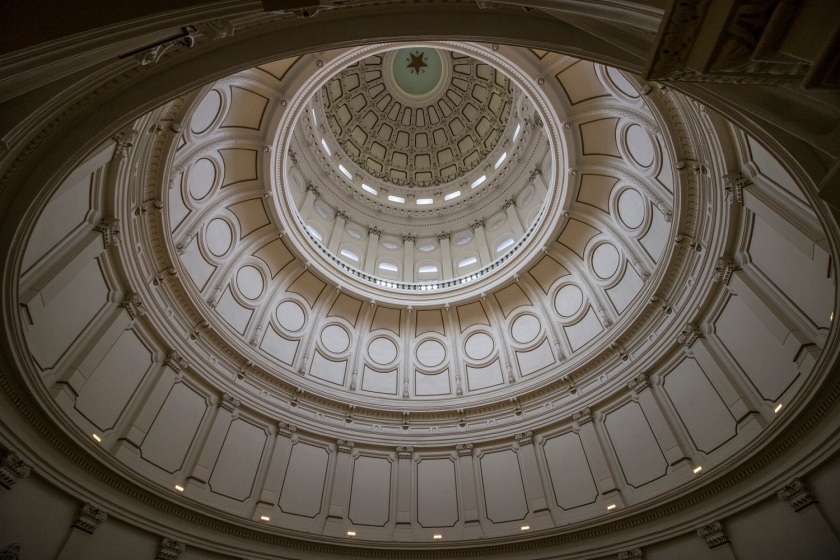 Our first stop was Senator Charles Schwertner’s office, where we met Deandra Porter, who is the scheduler for the office. Ms. Porter explained to us how the Senator’s office was run.

She engaged us in conversations of how a Senator’s office would be like throughout session and stressed the point that no matter how busy they are in the office, anyone who comes through their door with a problem must be assisted immediately, including a kindergarten class touring the capitol for the first time. Soon after we met with Chris, our tour guide.

Before taking our tour, we made a quick pit stop to see the painting of our beloved Sam Houston.

Next, we began our tour of the Texas State Capitol. Here, we had a chance to see the governors’ portraits…

…check out the Senate Gallery… 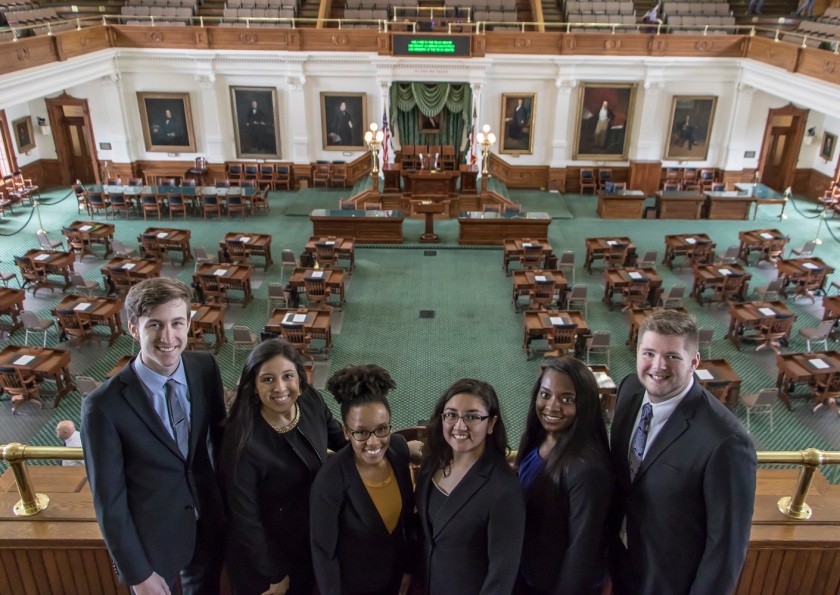 …and even go up to the Speaker’s Dias in the House, where we could see a wonderful portrait of Sam Houston.

To continue our Sam Houston theme, we also went to the entrance, where we posed with Elizabet Ney’s sculpture of General Houston. 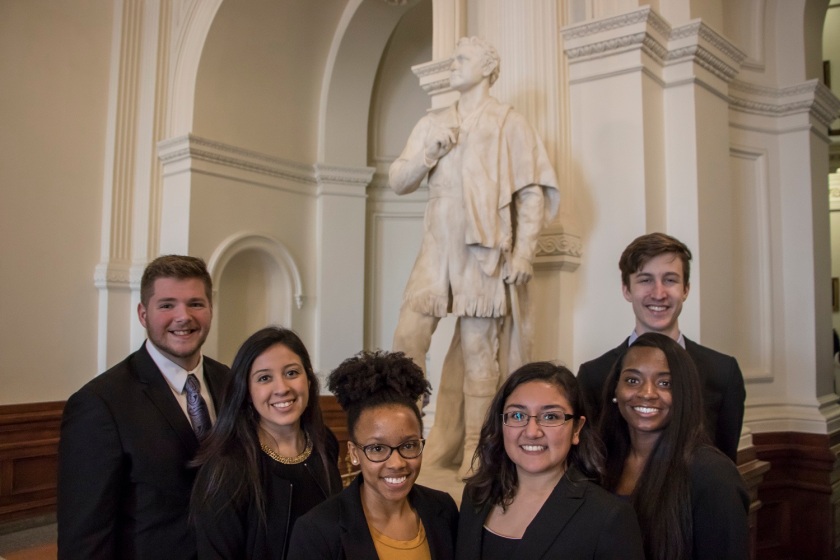 After finishing our tour, we met with Scott Jenkines, who is the chief of staff for State Representative Armando Martinez. 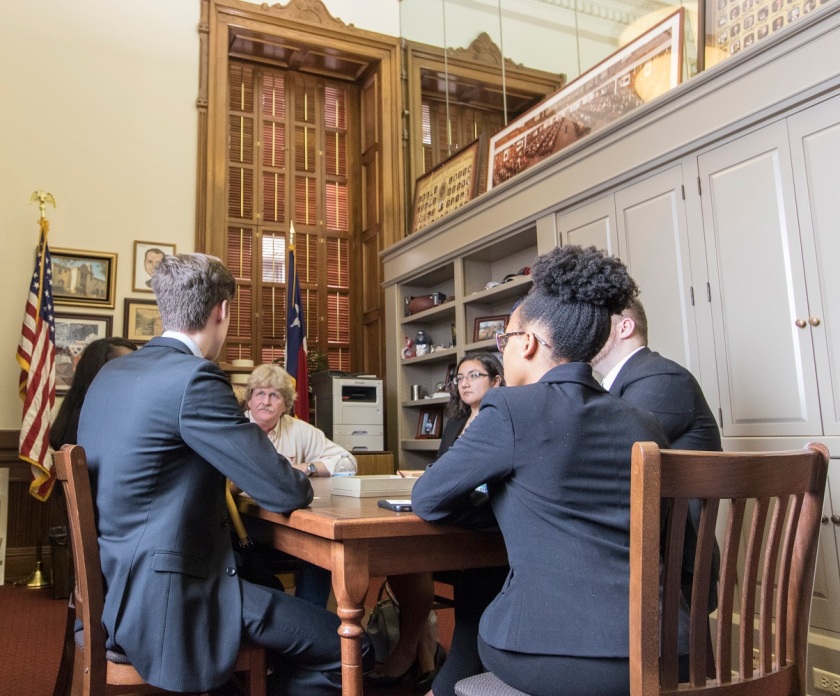 After captivating us with stories of the Capitol and his experience with the internships, Mr. Jenkines turned to the students for questions. Everyone was curious about the various aspects of the internship, and Mr. Jenkines and Beatriz enlightened us with their experiences. 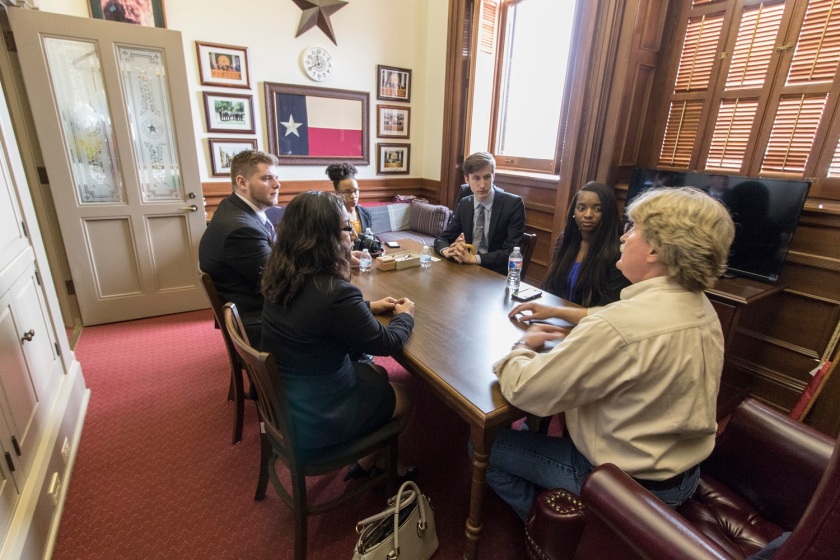 Following an interesting and enlightening morning, we headed to one of our favorite Austin restaurants: The Clay Pit.

The Clay Pit by Christina Perez

The Ambassadors and friends visited their favorite restaurants in Austin this week! Sawyer, Ilexus, and Tyara had never been to the contemporary Indian restaurant, The Clay Pit. It is in the historical “Bertram building” in beautiful downtown Austin. They are locally owned and have been open since Austin was just starting to form into the city it is today. As we arrived, we were happy to find out that they had a lunch buffet on the menu, so we decided it was the best way to try an assortment of foods. As we went around the table talking about some of our favorites, the consensus winner being the chicken tikka masala, we also talked lengthily about our trip. It was a great way to show our new friends a new type of food!

We hoped to visit the Blanton Museum of Art on Thursday, our first day in Austin, but the Museum was unexpectedly closed for a private reservation.  Thus, we shuffled our day trip around, and we stopped by again today.

Upon entering, we were greeted by a grand foyer with walls decorated with intricate tiling on the marble walls with varying shades of blues.

We were reminded to take note of the Roman motifs in the front room, a work of art, that profoundly represented a traditional Roman bathhouse. The only exhibit on the lower floor was solely on Ellsworth Kelly to promote and give background knowledge on the gallery’s new installation called, ‘Austin.’

Inside the exhibit were beautiful displays of minimalism coupled with descriptions and explanations detailing the inspirations behind each piece.

The exhibit snaked around through totems made of redwood and color spectrums until we reached the foyer again.

This time, I noticed the massive sculpture hanging from the center of the ceiling. This piece, made by Thomas Glassford, spanned about twenty feet long and displayed a long, elegant arrangement of different types of flowers that intertangled to create the shape of a jellyfish. We all enjoyed the exhibits upstairs which contained Latin American Art… 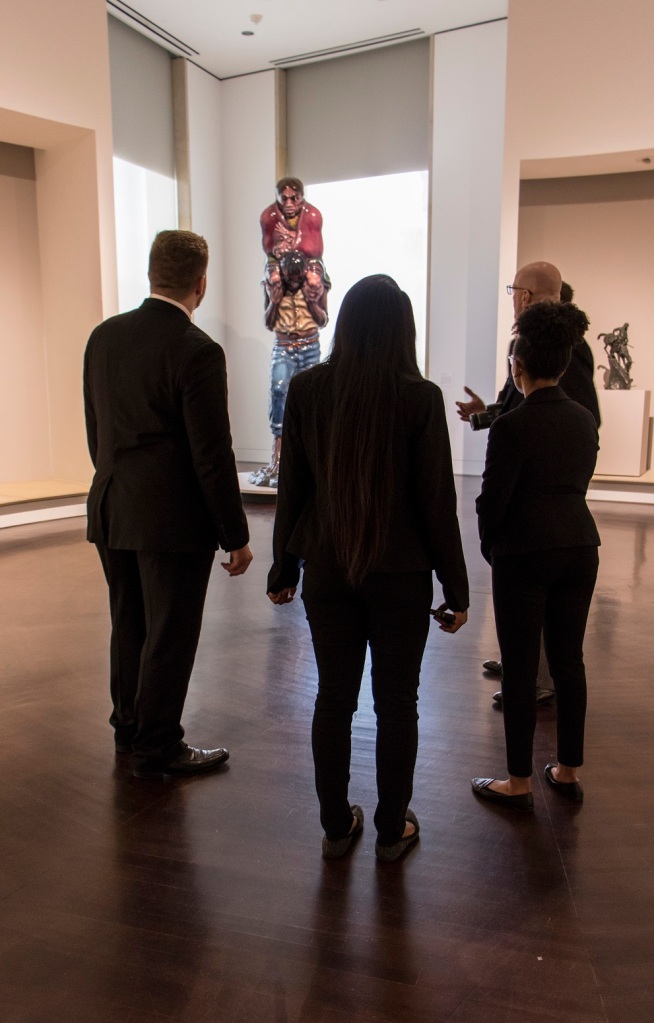 …and European Art however we spent the most time in the American/Contemporary section of the gallery.

Here, we quizzed each other on who could guess the famous artist behind the paintings and pieces. Among these were Warhol, Lichtenstein, and Rivera. 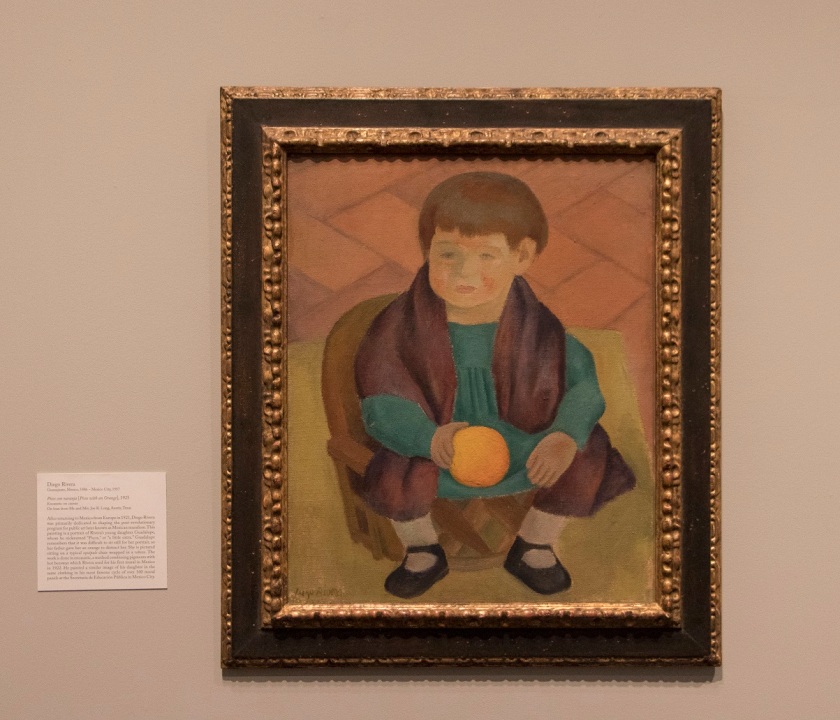 Towards the end was a room which contained one singular structure sitting in the middle of the room. It looked like a raised tent with transparent mesh walls with thousands of pennies on the floor inside. It took us a second to realize, but the roof of the tent was made of bones and there was a stack of Catholic communal bread attaching the penny floor to the bone roof.

This was symbolic of the early colonialization of Native Americans by the Europeans who wiped out the population during their settlement in search of wealth. I think we all left that display feeling like we had earned a new respect for abstract art. We sauntered about the rest of the exhibit admiring sculptures and culturally innovative art styles until we, once again, were led back to the foyer, where we made a final stop to once again experience the colorful art of Ellsworth Kelly.

But our Ellsworth Kelly wasn’t over!  We made another stop in the “Austin” Chapel, where we had a chance to experience the beautiful stained glass windows with actual sunlight shining in. 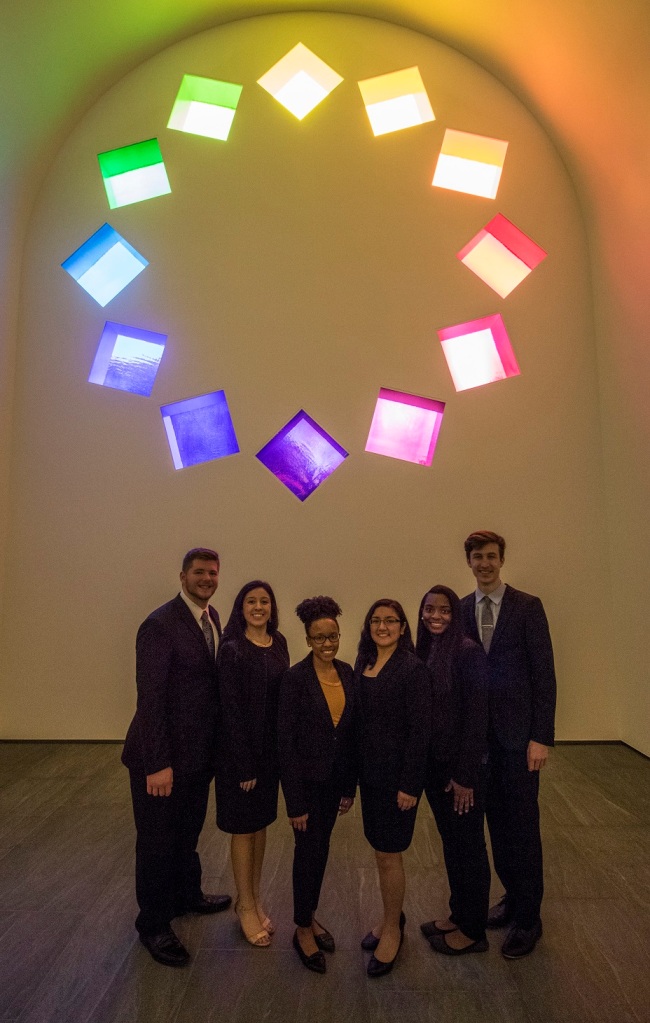 The chapel was beautiful, and the light from the stained glass perfectly complemented the art we saw inside the Blanton…

…and it formed a nice image for us to impress in our minds as we planned to depart Austin. 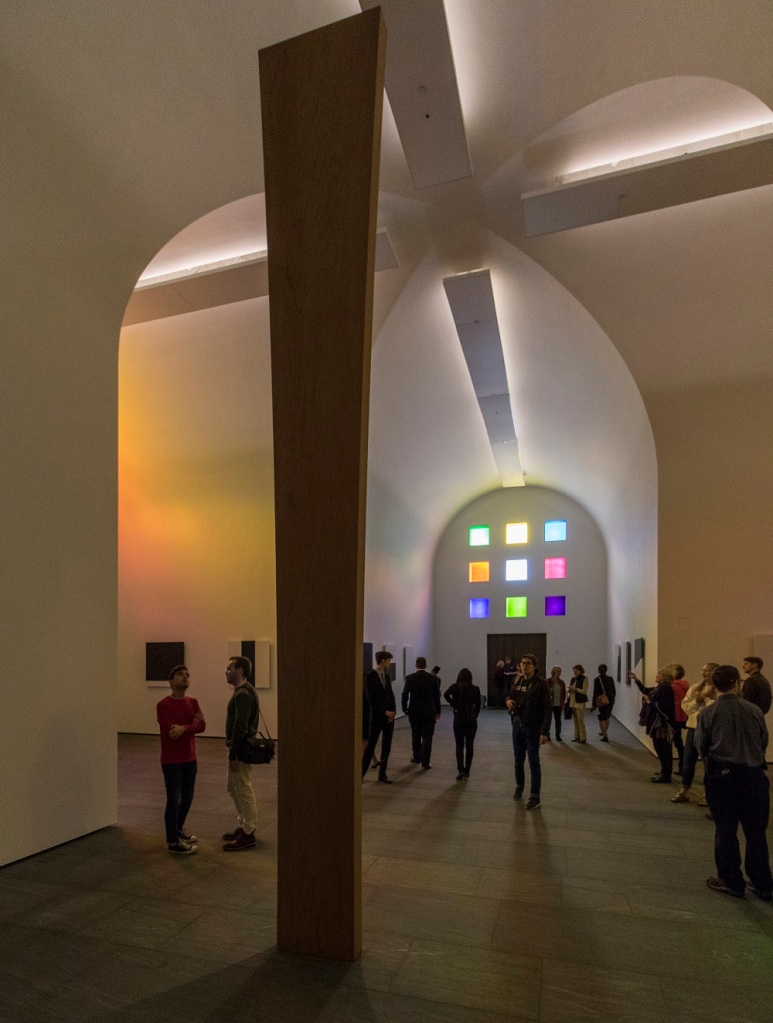 This is where our journey of the Blanton Art Museum ended, as well as our Austin adventure, as we headed back home before embarking on our next quest of learning, art, history, & literature.