On our last day in the rugged west, we went for an early morning hike at the Bandelier National Monument, where the Ancestral Pueblo people lived starting approximately 11,000 years ago.

The Bandelier National Monument encompasses over 33,000 acres of protected land and over 70 miles of trail. We adventured on the most popular trail at the national monument, the Main Loop Trail, also known as the Frijoles Canyon Trail. As we wandered on the 1.2-mile trail, we had the opportunity to see archeological sites such as Big Kiva…

…Tyuonyi, Talus House and the Alcove House. As we learned about Big Kiva, a communal meeting place used for religious, educational and decision-making purposes, we spotted three mule deer around the Tyuonyi ruins. To our surprise, one by one, the deer calmly approached the site, stopping a couple feet away from us to snack on some of the grass (although we want to believe that it was because we are some kind of wildlife whisperers). 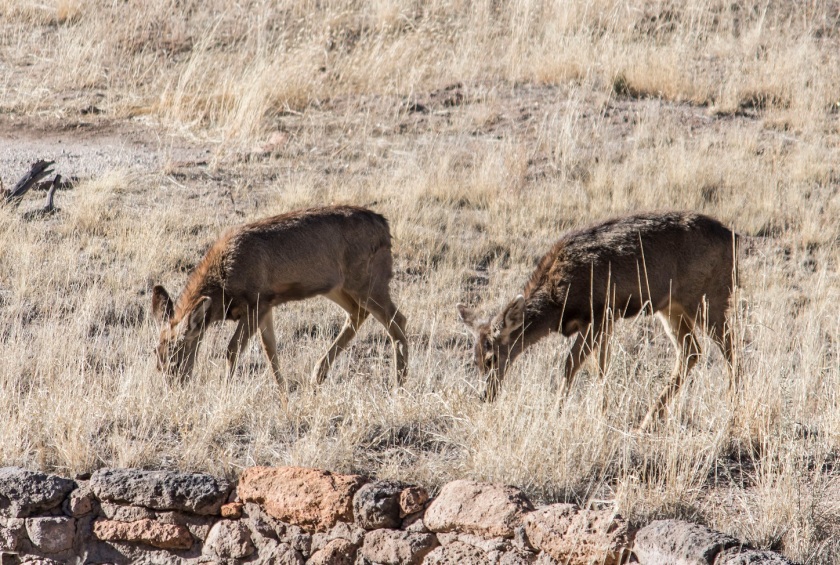 As we continued with our tour, we learned that the Tyuonyi pueblo was one of the several large pueblos located within the Bandelier National Monument. The Tyuonyi once had over 400 rooms and it was home to approximately 100 people.

We were able to better appreciate the scale of the remainings of the Tyuonyi structure after climbing a volcanic tuff cliff situated in front of it. Resting on the cliff were the Talus Houses which were reconstructed in 1920.

We had the opportunity to enter the small cave dwellings called cavates via ladder. 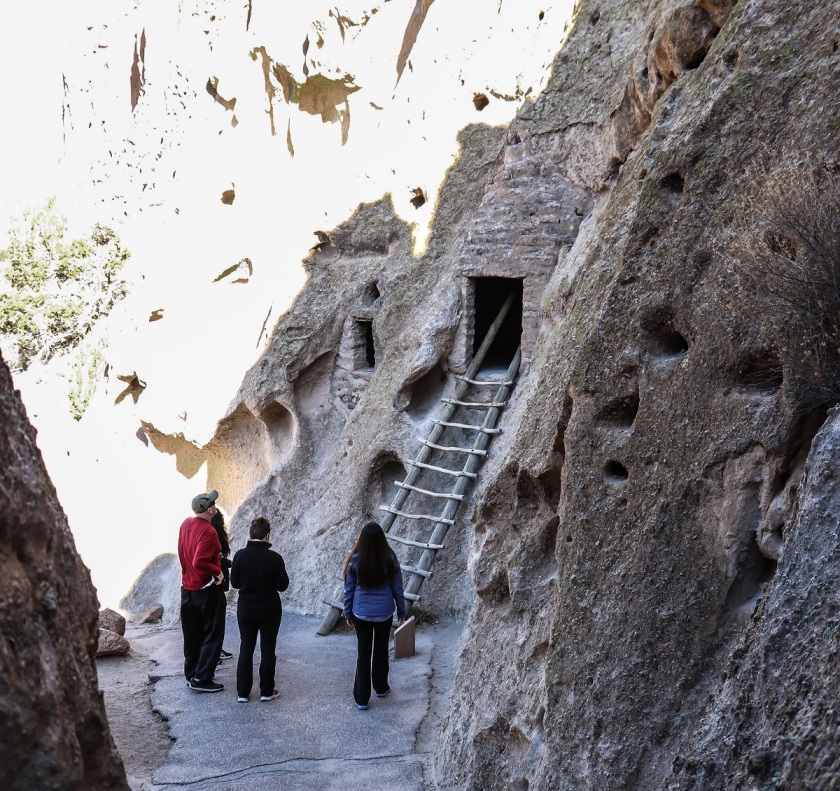 We learned that because the clay rock was crumbly, the people would burn the clay constantly to make it sturdier.

Midway through our trail… 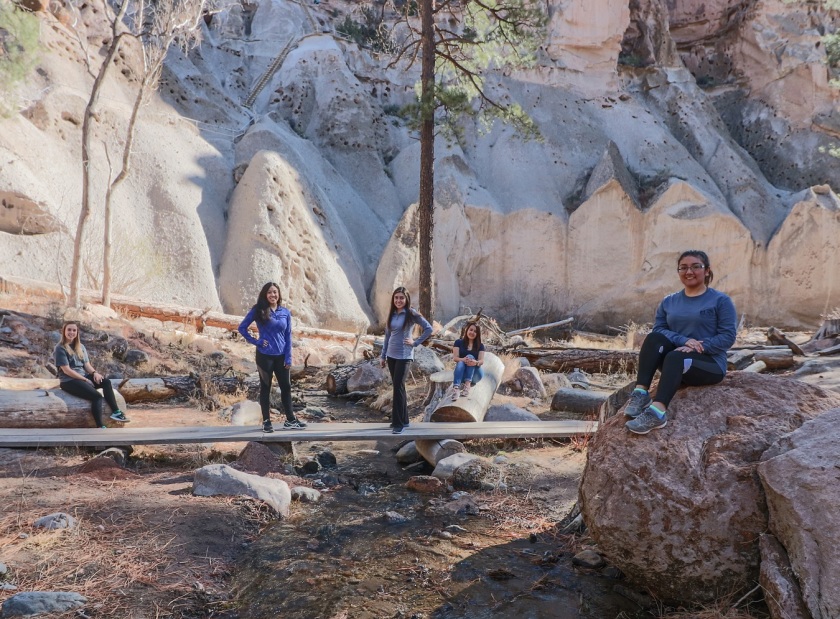 …we adventured on the Alcove House which rests in the upper part of some large volcanic tuff cliffs.

To reach the former ceremonial cave, we climbed 140 feet up via four steep wooden ladders…

…all despite Karla’s fear of heights.

…the narrow and partly paved paths were not crowded by visitors, which gave us some extra time to carefully explore…

…and enjoy the views…

of such a scenic and photogenic place.

After our hour-long hike at the Bandelier National Monument, we headed back to the hotel to pack up and enjoy our last few hours in Santa Fe. We spent part of our afternoon at the heart of downtown Santa Fe around the plaza market which was filled with various shops and art galleries. 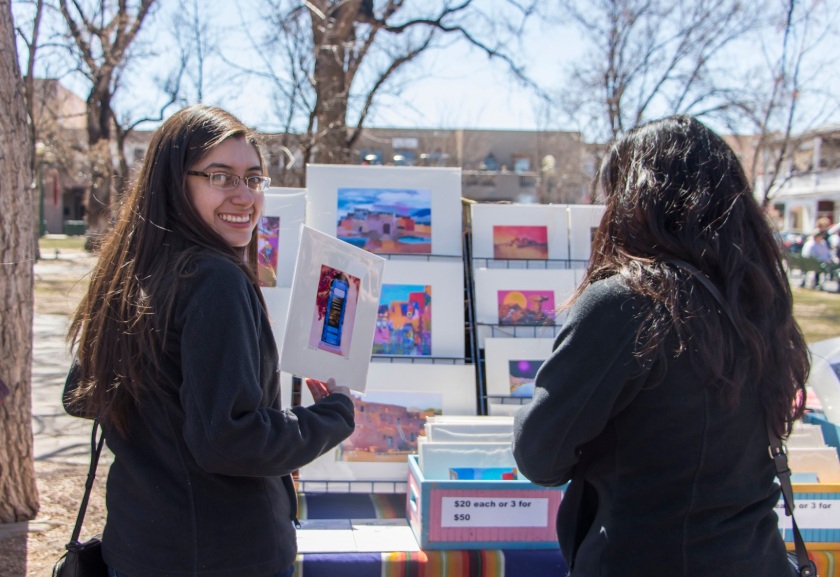 We began our walk through the portal at the Palace of the Governors which was filled with Native American Vendors. The Native American artists, from approximately 41 pueblos and tribes, make and exhibit jewelry, pottery and other works of art.

The program that allows Native artists to showcase their art is called Portal Native American Artisans Program and it requires for the vendors to be members of New Mexico tribes and Pueblos and for all of their pieces sold to be genuine pieces. Some of us bought copper bracelets and even a copper guitar pick which were handmade and had unique cultural symbols and designs. Other ambassadors decided to walk around the plaza and enjoy a hot cup of coffee from a local shop. 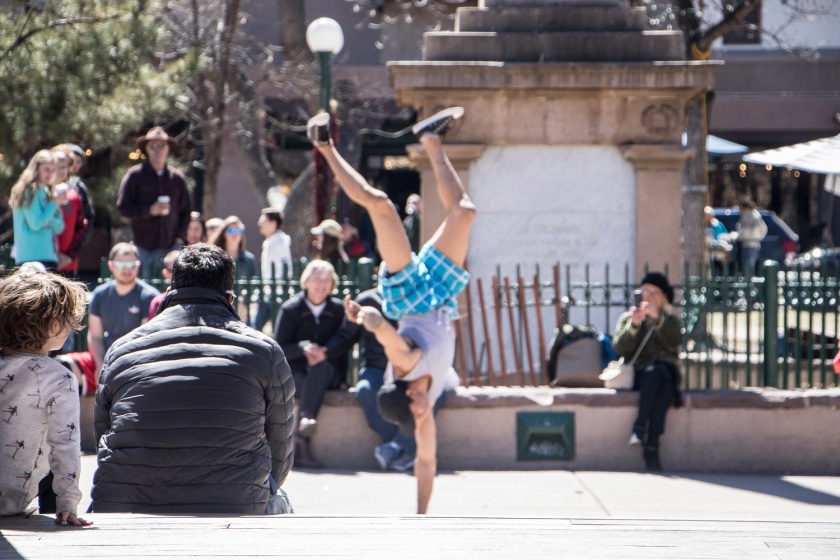 We wrapped up our quick shopping trip and hurried to meet with Mark Burns for lunch.

Make Burns is a well-known photographer who grew up in Houston and who is known for the National Parks project that featured his photographs of all 59 National Parks. Currently, The LEAP Center and Mark Burns are collaborating to create a documentary on his profession and his successful career as a photographer. Interestingly, as he was working on the National Parks Project he spent some time in Santa Fe. Besides joining us for lunch, he also met us to work on the documentary and allow us to take a few photos of him. Because of being so familiar with the city, he recommended that we visit Tomasita’s Restaurant which serves Northern New Mexican cuisine.  Tomasita’s was first opened in 1974 and has been a local favorite since then. During lunch we enjoyed listening to experiences Mark Burn’s had during the last few months. He shared news about his project of the 100th-year anniversary of the Grand Canyon and his new website design. 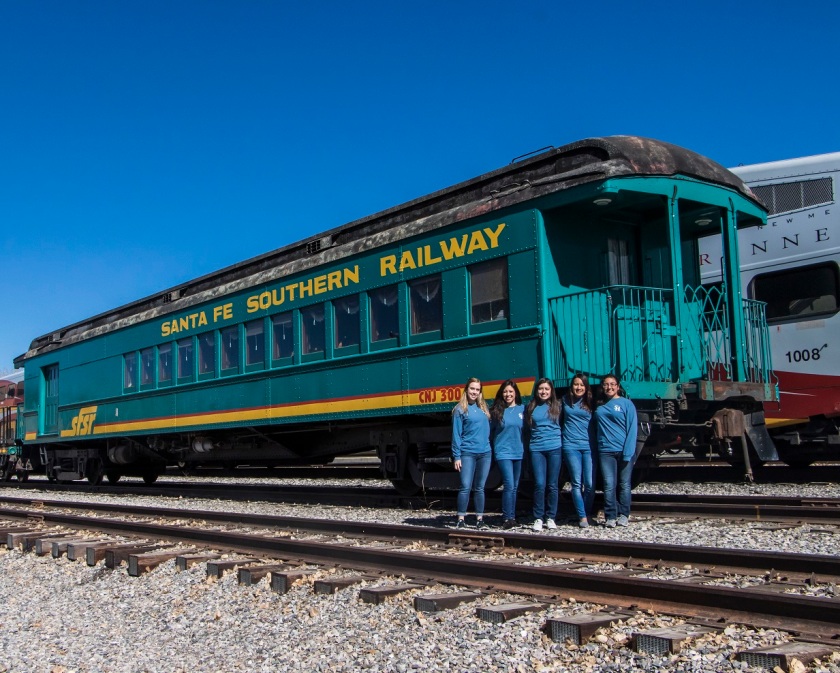 Our conversations were carried on through our walk with Mark Burns around Canyon Road.

As previously mentioned, Mark Burns sporadically lived in Santa Fe while he completed his National Parks Project. He took us to his short-term house located in this picturesque road. We were able to briefly film and photograph Mark Burns in this location to include the material as part of our documentary. 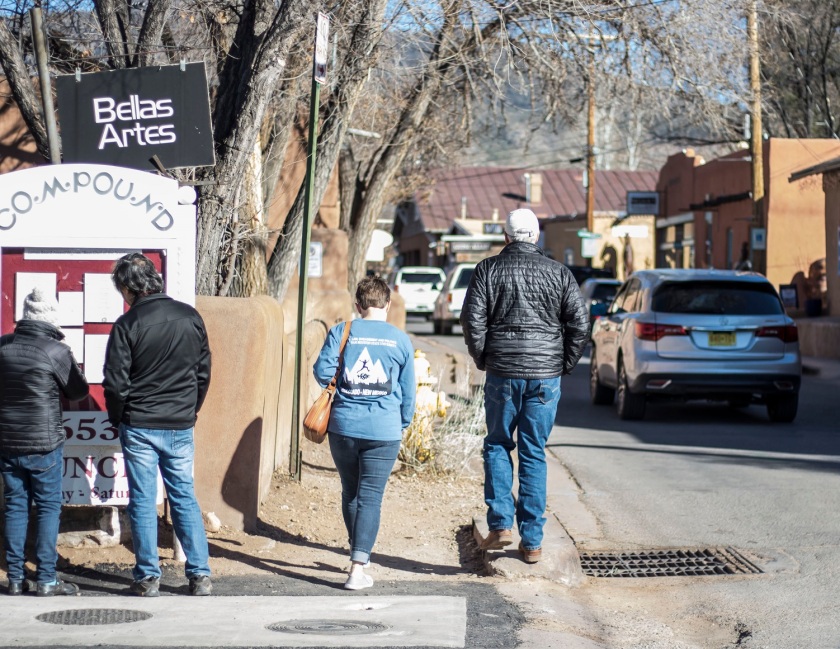 To our surprise, the neighboring gallery displayed several pieces of one of the ambassadors’ favorite sculptor, Allan Houser Haouzous.

We also had a chance to photograph Burns at the front of the home in which he stayed during his various trips to Santa Fe. 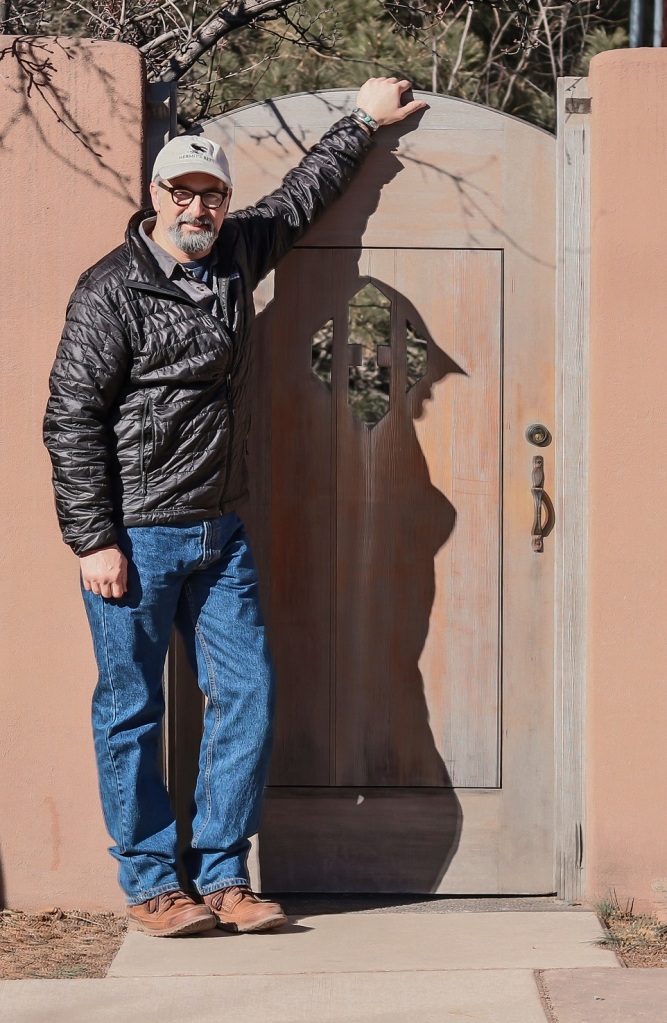 After concluding our work with Mark Burns, we strode through the charming road…

…peeked into a couple of galleries, took some photos, and visited a restaurant with a noteworthy side story.  The walls of El Farol’s (The Lighthouse) restaurant display five small murals brushed by Alfred Morang, an artist who made Santa Fe his home and whose house and former studio sit just off of Canyon Road. 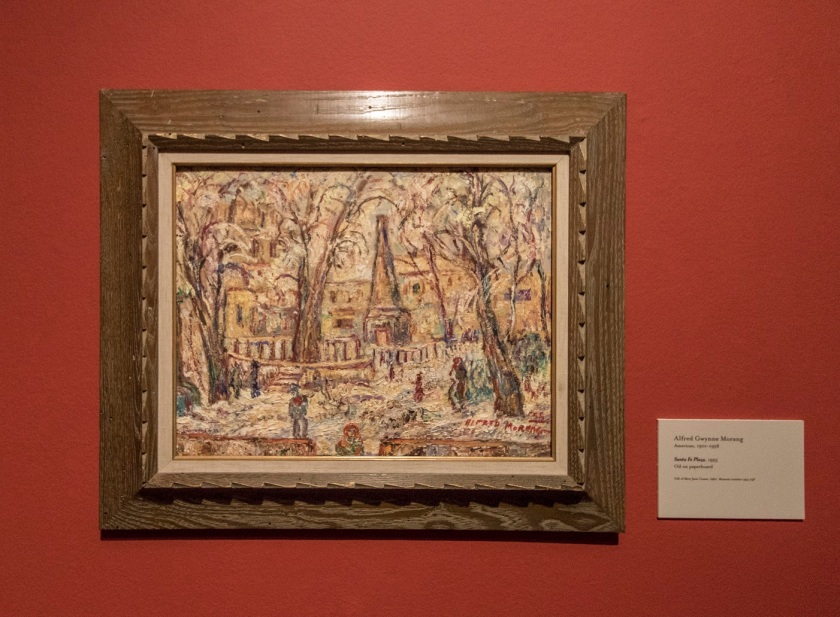 …in fact, our knowledgeable museum tour guide directed us to his artwork at this unique restaurant. Our New Mexico visit ended in this historic and popular part of Santa Fe. Although we were nostalgic to leave such beautiful city, we headed back to our home state delighted to have learned about the city’s culture, people, art and history.