The event was held at the Houston Advanced Research Center, a non-profit that promotes responsible and environmentally sound  innovations in energy.   The HARC building is a LEED certified platinum building, a recognitiion bestowed on buildings that are Leaders in Energy and Environmental Design.

We received a brief tour of the building from the Chief Operating Officer, Dr. Mustapha Beydoun, who very generously taught us about the architecture of the building and its environment–all designed to reduce the amount of energy consumed each year.

The HARC facility uses ground wells to supply water, open windows to supply lighting, and solar panels which provide energy inside when needed.  HARC’s goal is to become the first net zero building in Montgomery county, which means they use the solar panels on the roof of the building to produce more clean energy than they consume. 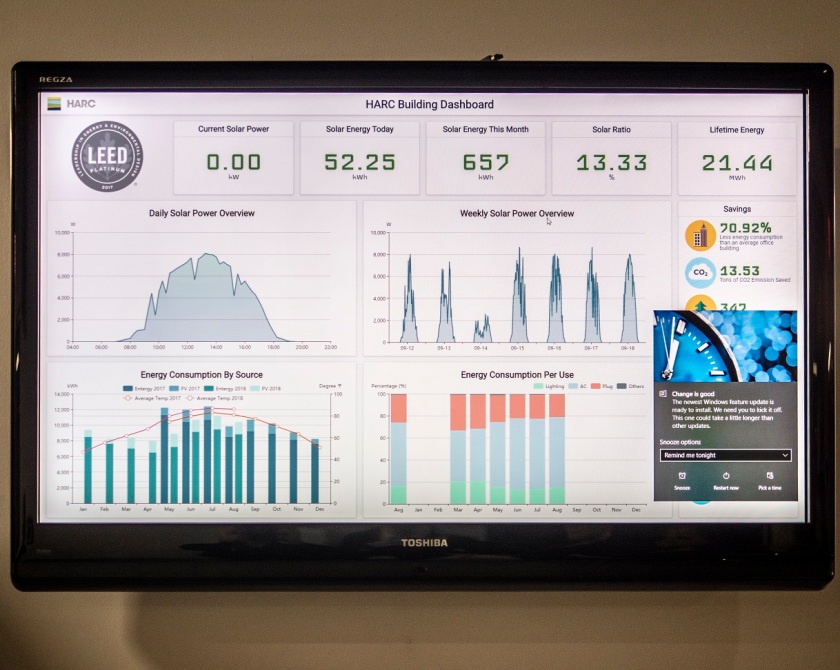 After the tour the Ambassadors and the other guests gathered in one of HARC’s presentation rooms to hear Bethany McLean discuss her new book, “Saudi America.” The book was sponsored in part by Columbia University, which houses the “Columbia Global Report, which in turn publishes six novella-length books a year about important contemporary topics.

McLean focused on the business aspects and ramifications of fracking rather than the environmental.  The LEAP Ambassadors–who aren’t energy experts–did their best to follow the discussion and learned much in the process.  Ronan O’Malley, WAC’s Director of Programs, aided in the learning process by asking cogent questions.

And Ms. McLean answered with the clarity you would expect of someone who regularly appears on television to discuss her reporting. 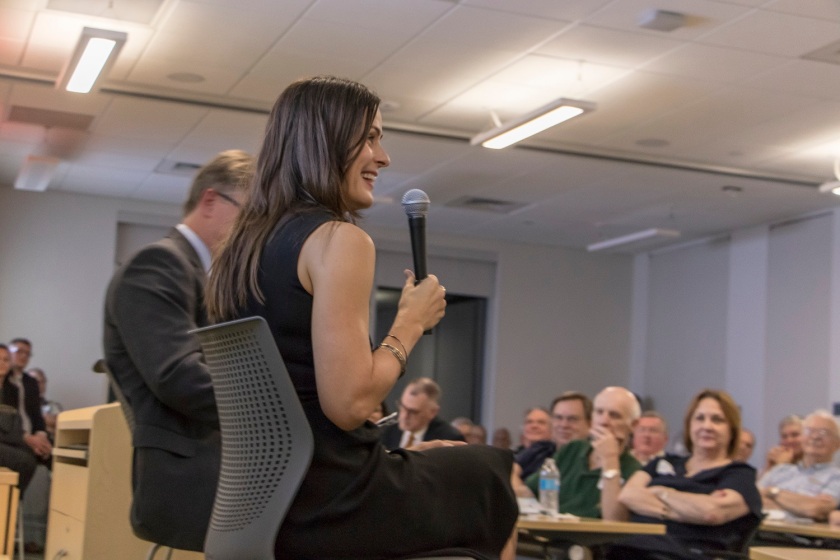 One of the more interesting discussions was about Aubrey McClendon, who was one of the key salesmen in the fracking industry.  After raising billions of dollars, he was indicted for conspiring to rig bids.  The next day, he was killed in a suspicious one-vehicle collision, in which McCelndon “pretty much drove straight into [a] wall,” according to the police.

Approximately 100 people–many of them likely businesspersons or otherwise knowledgeable about the energy sector–crammed into the room to hear Ms. McClendon’s presentation and seating was scarce.

As might be expected from such an audience, numerous questions were asked, and Ms. McLean handled the questions ably.

Our second most veteran Ambassador, Victoria, asked a question.  Veering from the theme of energy, Victoria asked a question about journalism: “How do you know when you’ve done sufficient research to draw full and correct conclusions?”  Ms. McLean answered: “Never!” 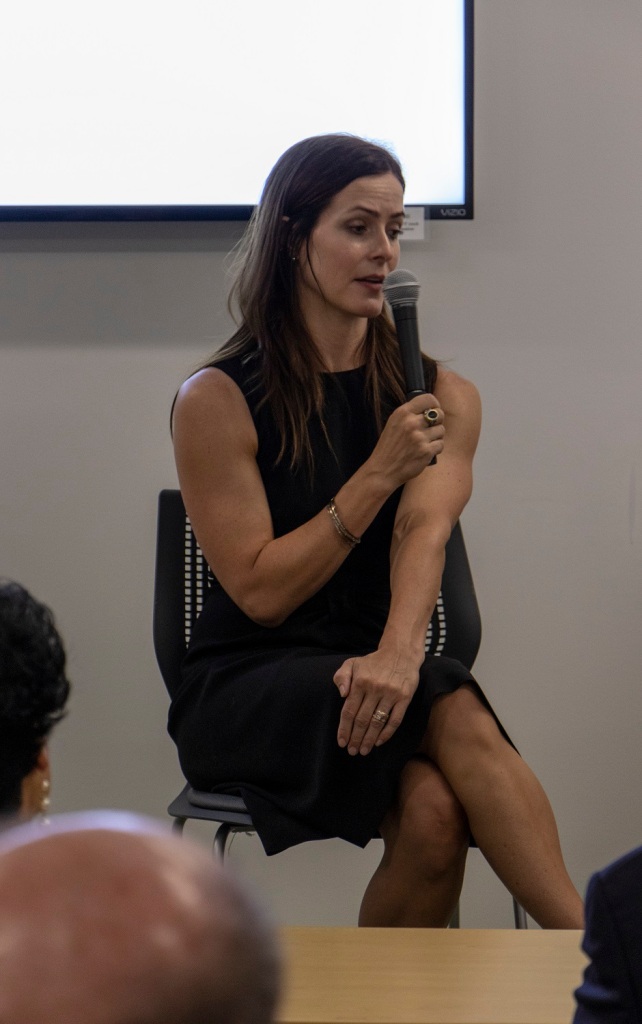 She explained that there is always the possibility that there is more information out there that just hasn’t been uncovered.  All a journalist can do is go through the correct process: educate yourself on the topic, dig as deep as possible, rely on multiple sources with competing and separate perspectives, and give principals the opportunity to respond.

It was a good lesson for journalists, and also for people involved in the law or politics, as most of Ambassadors hope to be.

Following the presentation, Ms. McLean signed books, and the LEAP Students go in on the action.

And following the book signing, Ms. McLean graciously spoke with the students and posed for a photograph.

After events, the LEAP Ambassadors like to eat at a restaurant that has the same theme as the event. Unfortunately, there is not an industrial oil restaurant, so we settled with olive oil and went to an Italian restaurant named Pallotta’s. Pallotta’s Italian Restaurant has been family owned and operated by Phil & Heather Nicosia, along with their two daughters, Emilia & Isabella since 1994.

We started with a sampler featuring some Italian favorites such as meatballs, fried mozzarella, and toasted ravioli.  The main course was filled with delicious food. Some of the dishes include the Zita ala Prosciutto and the Walsh. A table favorite for the night was the tomatoes and basil soup. 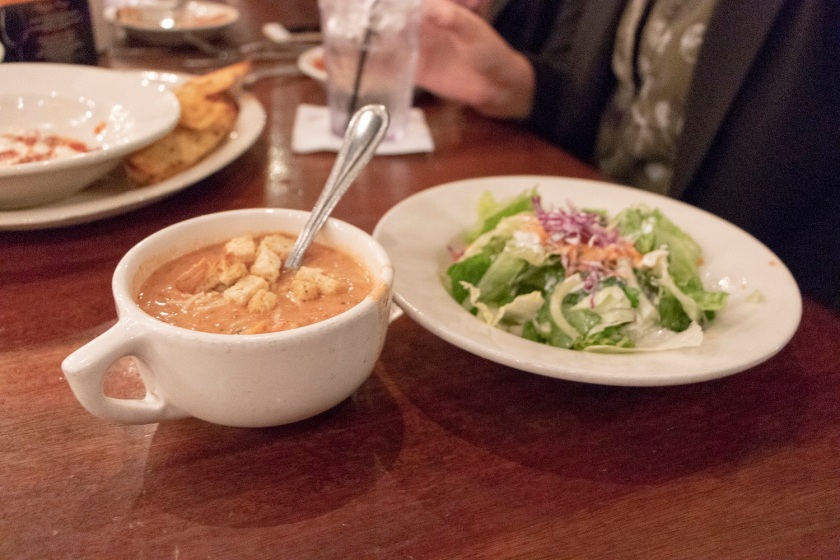 We enjoyed our homemade Italian food while discussing the Saudi America event and upcoming LEAP events.

Following an enjoyable and educational evening, and a full stomach of great food from a wonderful restaurant, the LEAP students returned to Huntsville, ready to return to classes.