Our third day in Austin promised to be a busy one.  With panels on the agenda, plus our regular retinue of meals, and a keystone speech with Beto O’Rourke, we were hoping for a climactic day at the Texas Tribune Festival.

The struggle of going from serving the nation to becoming a civilian in the nation is something that goes unnoticed by many. Today we heard from a panel of speakers talk about the different programs available to help veterans adjust to civilian life.

We heard the perspectives of Jodey Arrington, a U.S. Representative for Texas’s 19th district, Paul Reickhoff, founder and CEO of a veteran’s support group, Ruth Ruggero Hughs, chairwoman of the Texas Workforce Commission, and Richard Delgado, director of Military Affairs at Texas A&M – San Antonio.  Each panel member began by briefly discussing the fact that many veterans are left underemployed and how that overall affects the mental health and adjustment process of each veteran.

“Babies, puppies, and vets,” these are the things that people seem to love. According to Rieckhoff veterans are underemployed not because they do not have the skills required for a job, but because they are seen like by businesses as more of an investment. In the beginning, it takes time for veterans to readjust but once they do, they benefit their employers.  He also says that many times politicians use veterans’ issues as a ploy to gain more voters but that ultimately nothing has really changed in order to help veterans adjust to civilian life. The panel was so informative and we were able to take so much from it! We were so glad we picked it!

While a couple of us were at the Deployment to Employment panel, the rest of us attended The Consequences of Gun Violence panel. It opened with a brief speech from Evan Smith, the CEO, and co-founder of The Texas Tribune.

Mr. Smith stressed how this panel was one of the most important conversations that would be discussed during the festival. He stated, “This is not just a policy issue, but a human issue.” He warned us that the discussion would be approached from a human perspective, not solely on policy. The panel included Chris Grady, a survivor of the Parkland, Florida shooting, Suzanna Gratia Hupp, former State Representative and survivor of the 1991 Luby’s Killeen shooting, Frank Pomeroy, pastor of First Baptist Church in Sutherland Springs and survivor of the Sutherland Springs mass shooting that also claimed the life of his fourteen year old daughter, and Nicole Hockley, the mother of a Sandy Hook School shooting victim and founder of Sandy Hook Promise.

Collectively, the panelists agreed that grief is different for everyone. Pomeroy emphasized that the tragic events that they all experienced do not define them, but are forever a part of who they are. He stated that his community continues to seek hope and will continue to give God the glory despite their tribulations. Hockley’s aftermath experience was different. She did not know what change was needed, but she was adamant that some form of action had to be taken. Eventually, Hockley went on to found a non-profit organization: Sandy Hook Promise. This organization strives to educate the public about at-risk behavior in individuals in the hope that future mass shootings will be avoided. Following the Parkland shooting, After his experience, Grady became involved in the fight for gun control laws. He is a strong supporter of the March for Our Lives and Never Again movements. He expressed that we must take personal action through civic engagement. Grady stated, “You can’t complain if you don’t do anything. Voting is important, especially for the youth.” Different from the rest, Hupp was filled with rage after her experience. Her rage was not aimed at the shooter, but rather at her legislators. She stated that she was angry with the laws at the time because the gun that she owned was in her car and completely useless to her. Later, as a U.S. representative, Hupp fought for the right to carry a concealed weapon.

At a time when gun violence seems like a normal part of life, Hockley stated that “it rips the scab off of my heart all over again when a shooting occurs.” She encouraged us to stay optimistic about our futures and the future of gun control. Even though the topic was heavy, it was a favorite of many on this trip. The panelists exuded such courage and hope for the future, and we wish them the best in their healing and the fight for their cause.

The State of Texas Music

After the panel on gun violence and a quick Starbucks pick-me-up, we headed over to a tent on Congress Avenue, in the pouring rain.

The reason for doing so was to see Joe Lanane from the Community Impact Newspaper interview Brendon Anthony who is the Director of the Texas Music Office.  Anthony has previously traveled the world playing his own music and is now focused on supporting up-and-coming music artists in Texas. 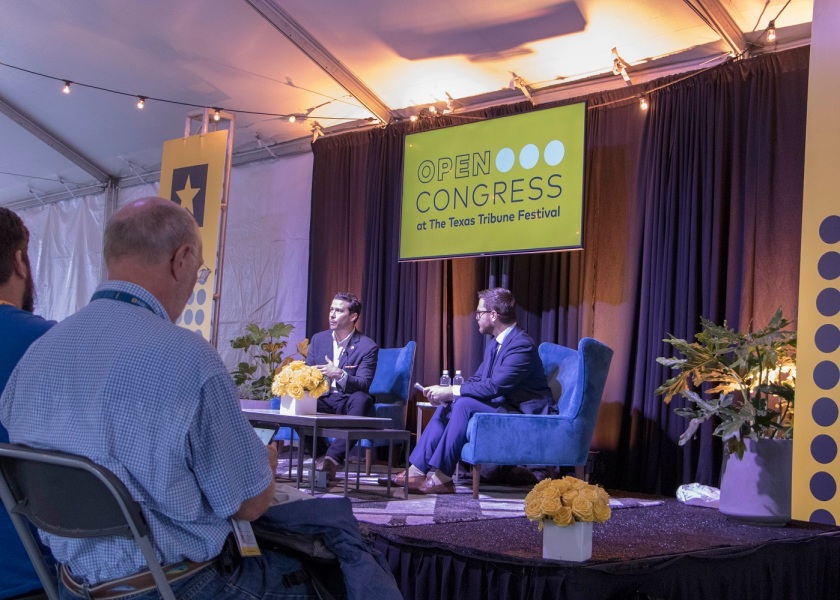 He explained to the audience that the Texas Music Office is run under the office of the Texas Governor Greg Abbott and that the goal of the TMO is to attract the music industry to foster the economic development of Texas music businesses and musicians. Unfortunately, Anthony says that they do remain one of the frequent targets of the Texas legislature, but he remains confident that they are able to demonstrate the importance of keeping the music industry thriving in Texas, and especially in Austin where the music and the musicians themselves are so important to the community.

One of the highlights for us was the opportunity to see Bethany McLean for the second time in approximately two weeks.  It was nice to note that she recognized us!

…and we each spent a little time with her getting books signed. 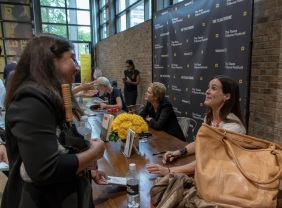 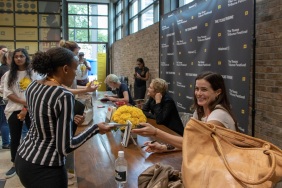 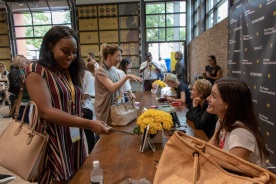 And we couldn’t resist asking for another group photo, which she happily obliged. 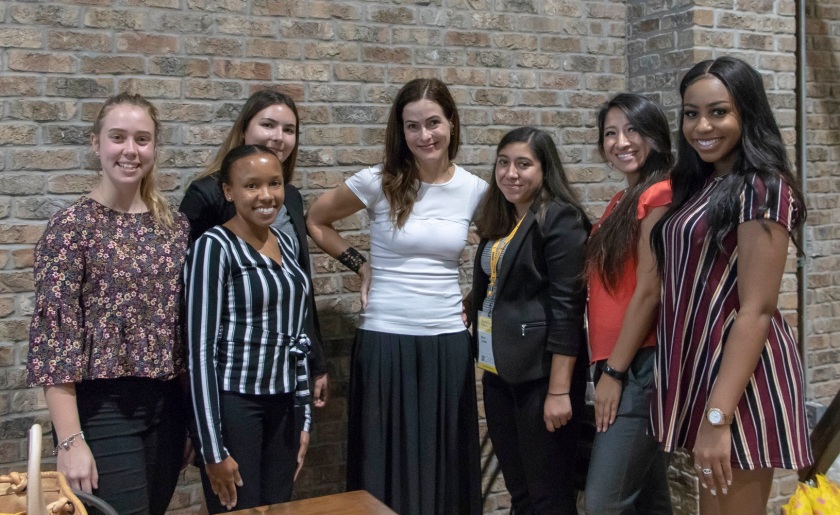 Could you believe that one of the most influential political years was 50 years ago? Today we attended a panel of diverse speakers including: Chris Matthews, author and host of MSNBC’s “Hardball with Chris Matthews,” Lawrence O’Donnell, author and host of MSNBC’s “The Last Word with Lawrence O’Donnell,” President LBJ’s daughter Luci Baines Johnson, and Sam Houston alumnus, legendary news anchor Dan Rather.

The panelists all attested to the “electricity” that filled the air during the time, as nearly all young men faced the draft, and were terrified that they would never return home if they left. Luci Johnson spent her allotted time setting the record straight about her father; she reminded the audience that her father never wanted to go to war and that he suffered greatly both physically and mentally during this time. No one during the sixties and seventies was keeping silent, and this is what the panelists say is wrong with American youth today. The common consensus was that millennials are not passionate about anything. People from that time period remember protesting on their college campuses for a number of good causes.  “Stand up to your parents,” was the advice the panelists gave to the youth of today when asked. 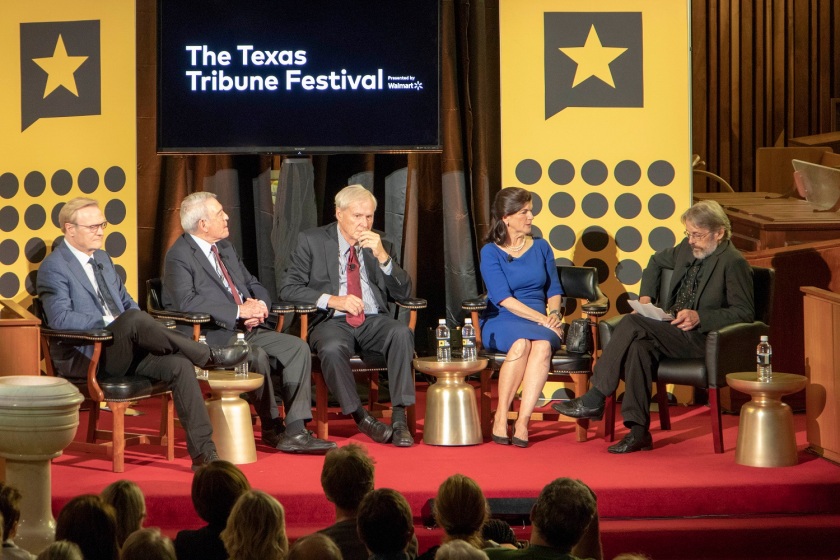 After the panel concluded Luci Baines graciously took a moment to pose for a picture with a few of us, even as nervous Tribune Festival volunteers attempted to usher her away from the crowds. 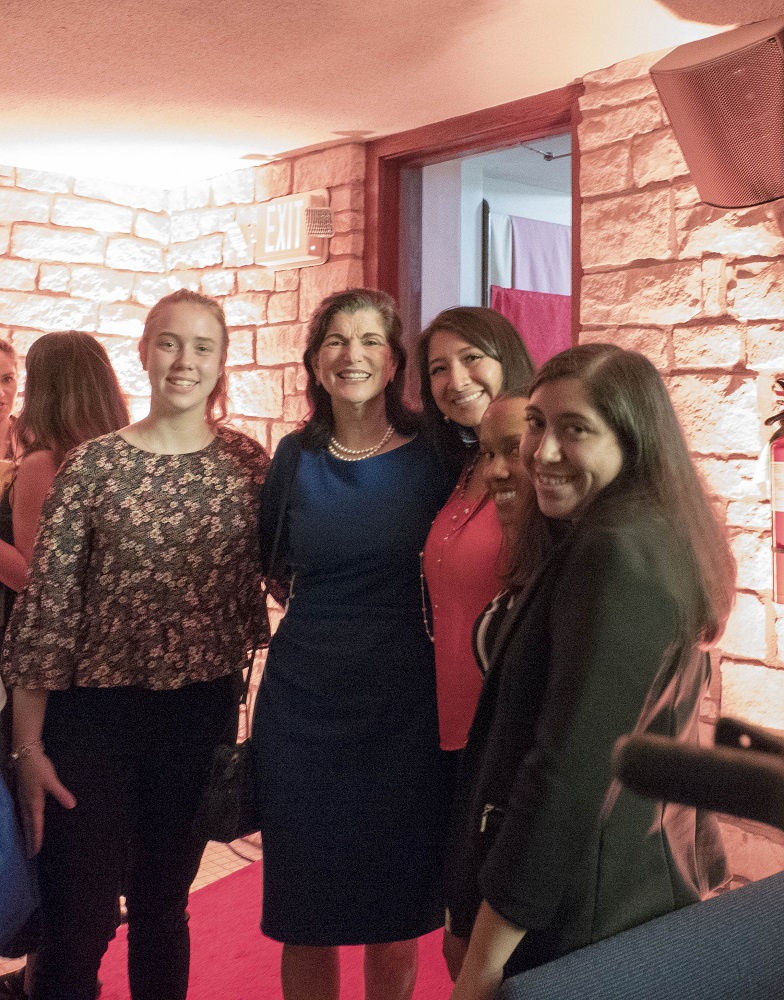 One on One with Beto O’Rourke

As our last event of the day, we attended the closing keynote for The Texas Tribune Festival. The event was held in an auditorium in The Long Center for the Performing Arts. Immediately after the keynote was over Beto was due to appear with Willie Nelson on a stage across the lawn, and outside the Center was jam-packed with people waiting in anticipation.

We headed inside and found seats in the auditorium before it got too crowded.

​Congressman O’Rourke was interviewed on stage by Evan Smith, the moderator or questioner.

Mr. Smith brought up Congressman’s DWI, and Beto’s stances on a number of topics like the legalization of marijuana, healthcare, and immigration. Congressman O’Rourke answered questions in a way that delighted almost all of the crowd.

Congressman O’Rourke emphasized his belief in giving the youth more attention in politics and media, promised to keep the people of Texas as his number one concern once elected. 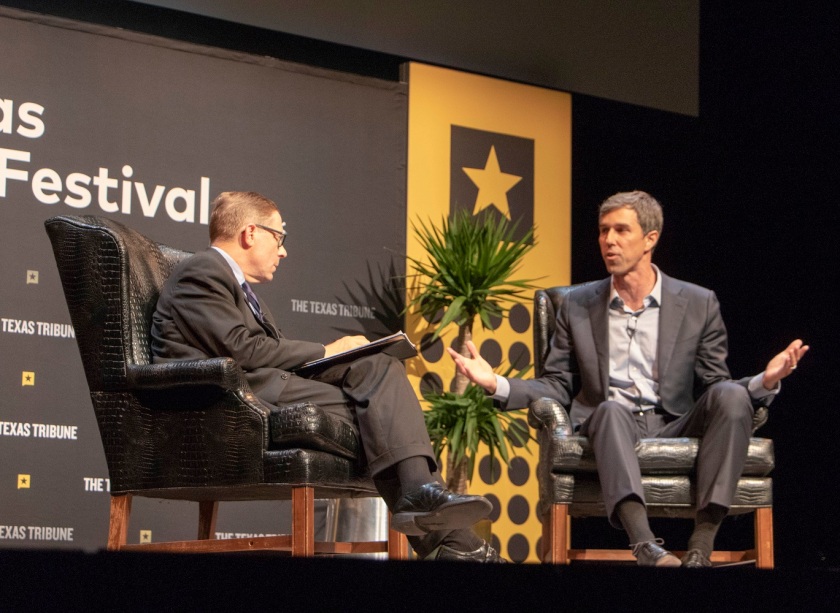 O’Rourke compared the American Judicial system to a modern-day equivalent to  Jim crow laws, which in turn inhibited the rights of minorities in society.  The closing keynote enabled us to learn more about the issues at stake in the upcoming election, so we were grateful that we were able to attend. The crowd was enthused by Beto, and we are all looking forward to what happens come election day November 6th.

For the end of our evening, we had dinner at an Austin favorite, but one that is a restaurant we had not been to: Jack Allen’s.  We tried diverse food, with red chili fries, pimento cheese dip, guacamole (the only guac we’ve had that included pumpkin seeds) and chips and salsa. 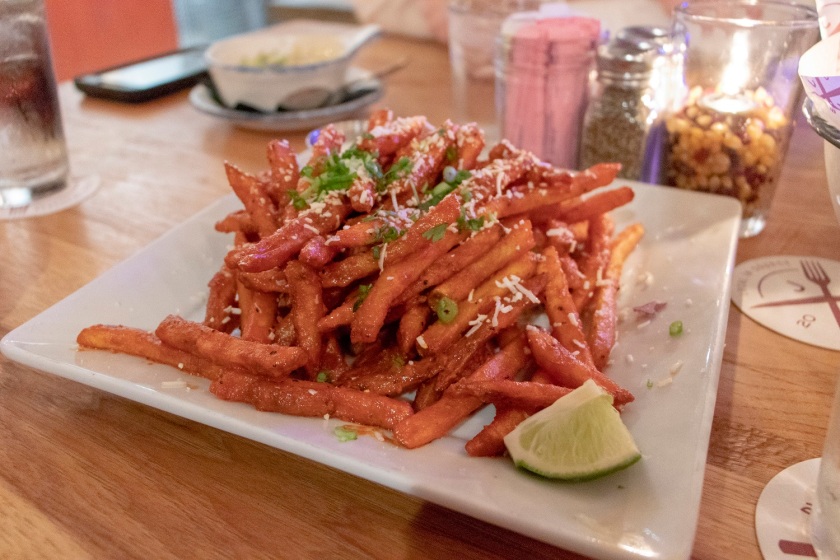 For the meal, we continued our diverse “comfort food” theme, with tacos, burgers, mac and cheese (with five cheeses)…

…and chicken and pasta.

The food was top-notch, the service was excellent, and the ambience was acceptable.  It was a comforting and delicious end to an interesting and exhausting day.

One thought on “A Festival Fiesta: Fun at the Texas Tribune Festival”