The second half of our first day in New York was much like the first half of the day: filled with wonder, sight-seeing, temperatures in the low 30s, and an icy wind capable of sneaking into even the warmest clothing.  Indeed, we considered changing course and seeking refuge in one of the gleaming buildings that towered above us (including a marvelous Frank Gehry building)…

…but the desire to see the Brooklyn Bridge pushed us onward.

The Brooklyn Bridge is a suspension bridge with an incredibly interesting history. It was originally to be built by John Roebling, but he died of tetanus arising from an injury he sustained while surveying the bridge site. His son, Washington Roebling, was selected to complete the bridge’s construction, and he worked hard to see the project to completion.  All this we learned prior to the trip, having watched Ken Burns’ documentary on “The Great Bridge.”

Washington was on site every day during construction until he came down with caisson disease, also known as “the bends.” Working in environments with drastic changes in air pressure (such as the underwater caissons during the construction of the bridge) can cause serious harm to the human body, and Roebling never fully recovered from the illness.

Being essentially incapacitated, Roebling would position himself at his upstairs bedroom window daily to observe from afar the progress being made on the bridge. He had a management team that he trusted completely, and he relayed messages to them through his wife Emily. She communicated his orders to his crew and was on site regularly in order to report progresses back to him. In May 1883, after years of toil, the bridge was finally ready to open to the public.  Emily was given the honor of being very first person to cross the Bridge in a horse and buggy. 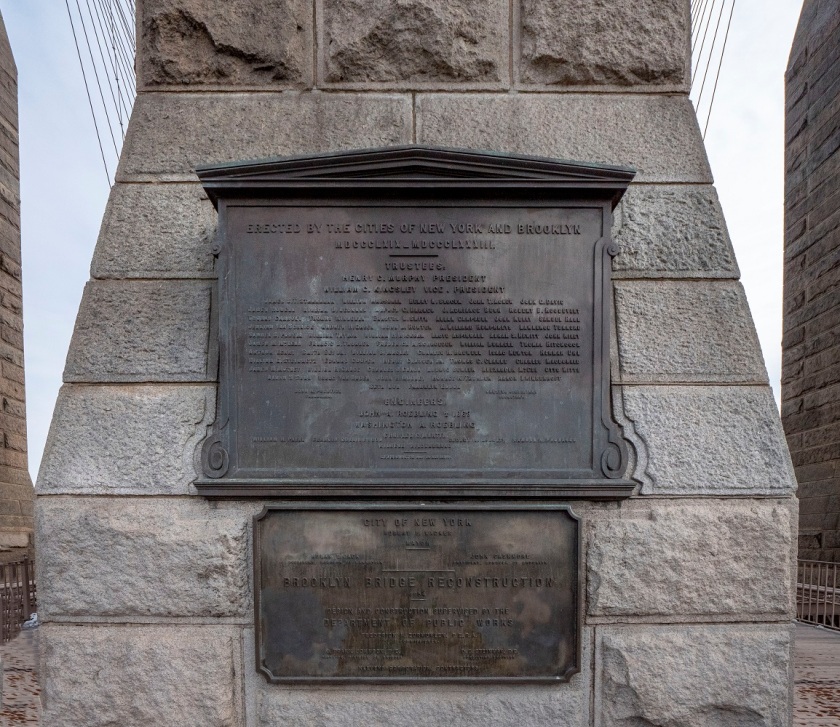 The Brooklyn Bridge was an incredible feat of engineering at, and even today many come from all over to see its iconic form jutting out over the waves of the East River.

We were no exception. We, too, posed for pictures using its iconic pointed gothic arches and columns as a backdrop. 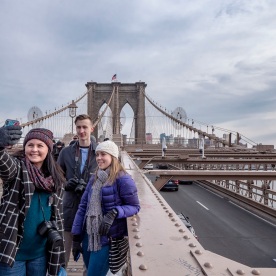 The wind whipped at our hair and clothes as we walked the promenade, but the view of the two different boroughs was well worth the chill as we crossed.

Once we crossed the 1.1 mile pedestrian walkway, we strolled through the Dumbo (Down Under the Manhattan Bridge Overpass) neighborhood, and we took the opportunity to take numerous photographs in or near the Frederick-Law-Olmsted designed Brooklyn Bridge Park.

There are many fascinating angles from this park… 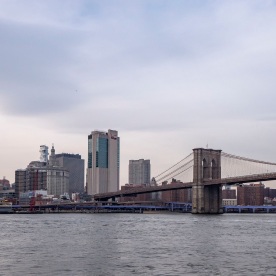 …but our poor photography did not do them justice.

To top off the experience, we took a ferry to the other side of river…

…where we searched for one of Richard Haas’s murals.  Haas was a one-time teenage-worker for the great Frank Lloyd Wright, and after a decade of art, he blossomed into what the New York Times has referred to as “the Architectural Muralist” of our time.  He has numerous New York City murals (along with 14-15 in Huntsville, Texas), and we found the one on Peck Slip in the Seaport area.

And with another Haas in the books, we headed off to the southern part of NYC to learn more about 9-11.

In planning for our trip to NYC, visiting the “National September 11 Memorial and Museum” where the twin towers once stood, was at the top of our list.  And so we walked from the East River toward the 9-11 Memorial.  Nearby, we walked through the Oculas, which is what ‘The Verge” called “New York’s insane looking train station.”  We prefer “immensely intriguing” to “insane.”

Inside the Oculus was a political message in honor of International Women’s Day, a message that addressed the relatively lower wages women receive in the workplace.

From there, we walked the block or so to the 9-11 Memorial, which was breathtaking.

Also known as Ground Zero, the two square pools that mark where the two towers once stood tall are surrounded by the names of the victims who lost their lives that day. As we walked around the Memorial, we noticed roses placed on the wall. We later found out that the museum does this to honor the victims on their birthdays.

The exhibit started with two very tall pillars that are some of the few remains of the Twin Towers.

Bent steel was a theme of sorts throughout the museum, a metaphor for the scar on a strong country (and city).  The Museum displayed this destruction in many of its manifestations, including firetrucks… 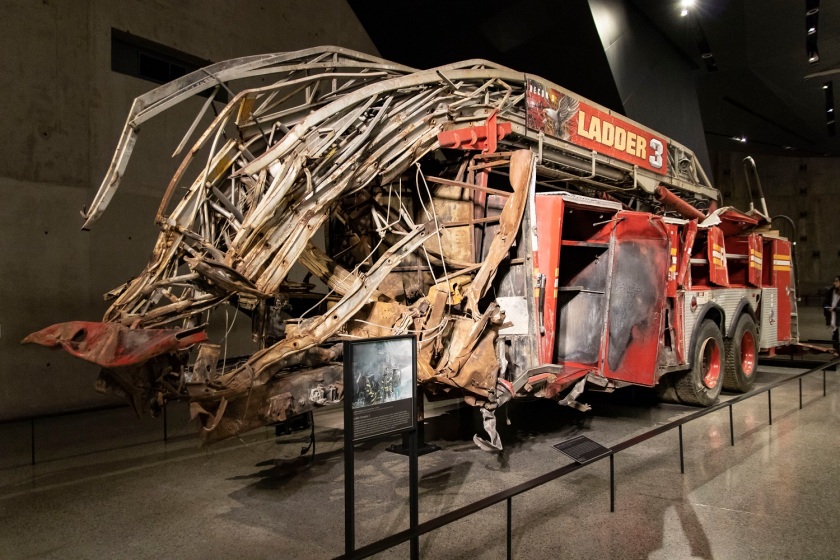 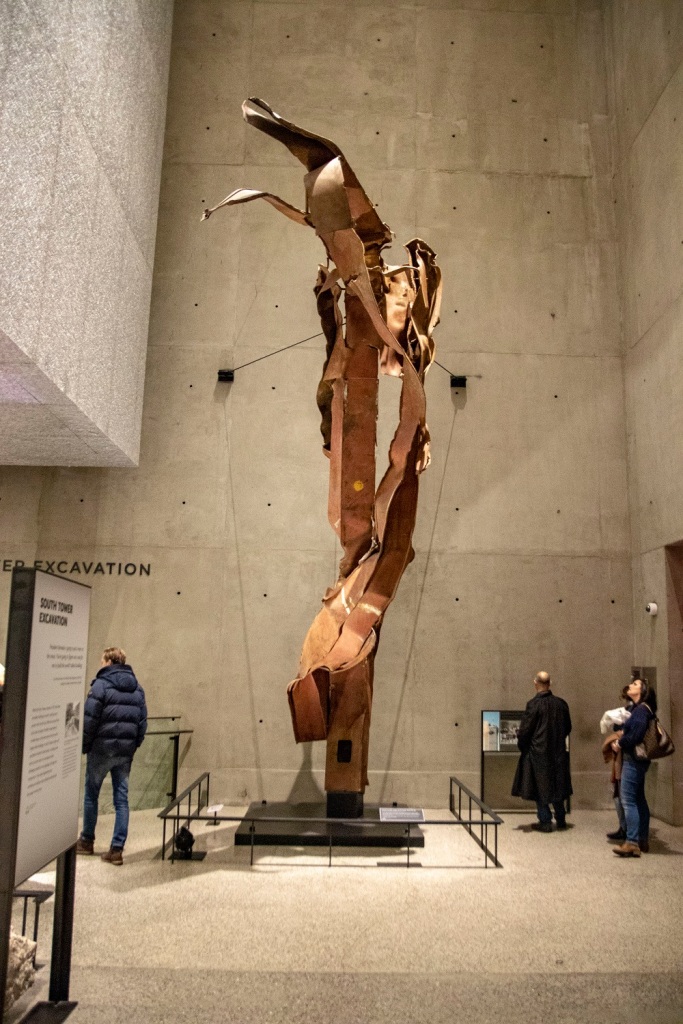 They had other artifacts known to us only through iconic images from 9-11 and its aftermath.

Photo of Survivors Coming Down the “Vesey Stairs”

The remnants of the “Vesey Stairs”

They had the famous photo of President Bush… 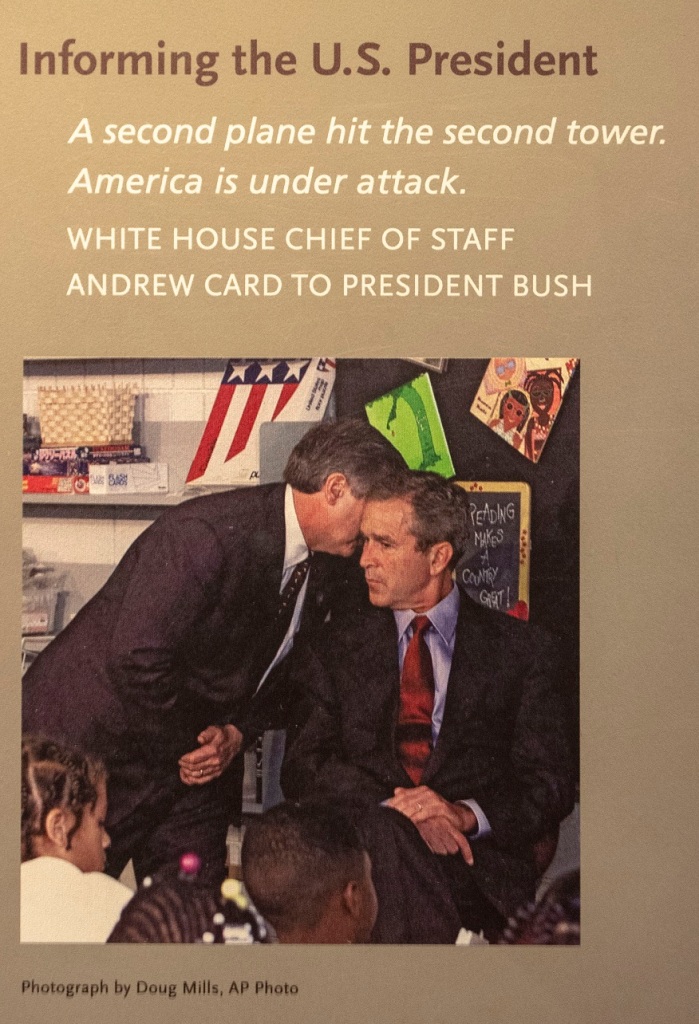 …learning from his Chief of Staff, Andy Card, that a second plane had hit the World Train Center.  It was then that President Bush knew that this was a purposeful attack and not a terrible accident.  (This photo had particular interest to us because we recently met Mr. Card).

For those of us too young to remember this historic event, it was helpful to have the complete timeline of the events that unfolded, not just in New York, but across the country that day.

A room dedicated to all the victims, including pictures, with interactive computers allowed us to select a victim by their picture to hear their story. It was a sobering, even gut-wrenching, experience.

The Museum also emphasized the resilience shown by New Yorkers and American citizens in responding to the tragedy.  Art was a theme, as exemplified by this piece created by Spencer Finch, “Trying to Remember the Color of the Sky on That September Morning.”

The piece incorporates 2,983 pieces of paper–one for each of those who died in the 9-11 attacks in New York–in various shades of blue.  The shades reflect Finch’s separate recollections of the color of the sky that day, and these sheets of paper are adorned with a quote from Virgil: “No Day Shall Erase You From The Memory of Time.”  The letters in that sentence were crafted from metal taken from the 9-11 debris.

…as well as a Robert Indiana-like IXXI sculpture by “Ultra Violet.”

Visiting the site, Memorial and Museum, was an amazing, yet melancholy, experience as we reflected on the events that took place, right where we were standing, 18 years ago.

Dinner for our first night in The Big Apple was at Eataly, an Italian market in the World Trade Center Station. We followed the smells through the market to the restaurant, La Pizza and La Pasta. After virtually no wait for our table, we enjoyed a carving board with a variety of prosciutto and Italian cheeses. Ravenous after trekking miles around the city, we each picked various types of pasta to fill our bellies, such as the particularly scrumptious spiral-shaped pasta with sausage ragú and broccoli rabe.  The food was good, although it perhaps needed to be stronger to compensate for the utterly indifferent service.

Although it was 9pm, and the temperature was falling toward freezing, we braved a few more sites.  We checked out the “Charging Bull” near Wall Street… 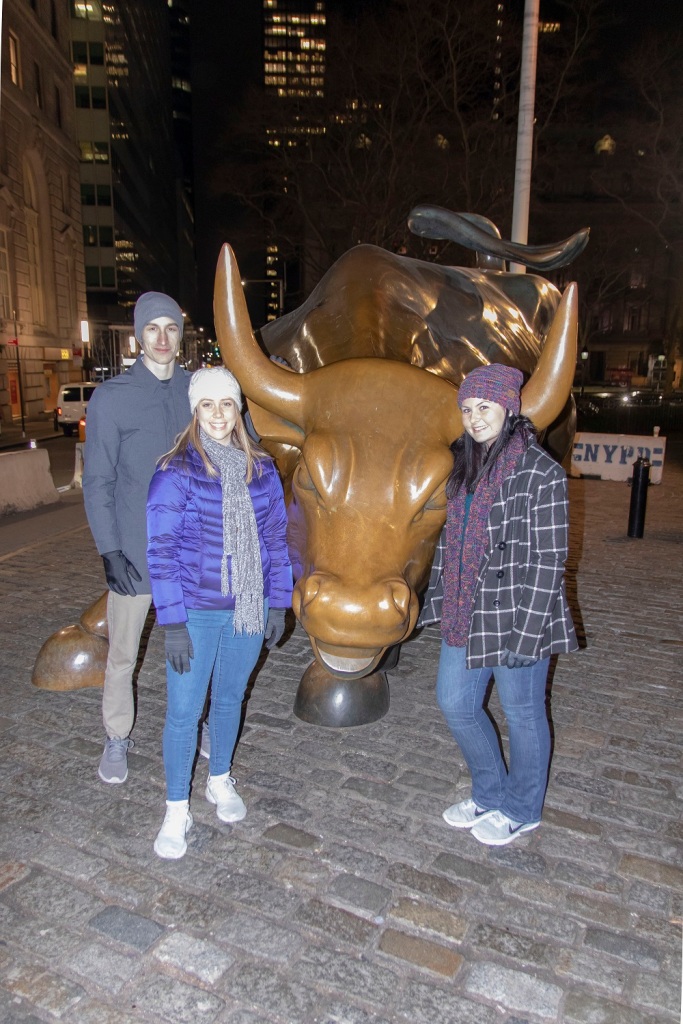 …as well as a Seward Johnson sculpture, with an interesting story. 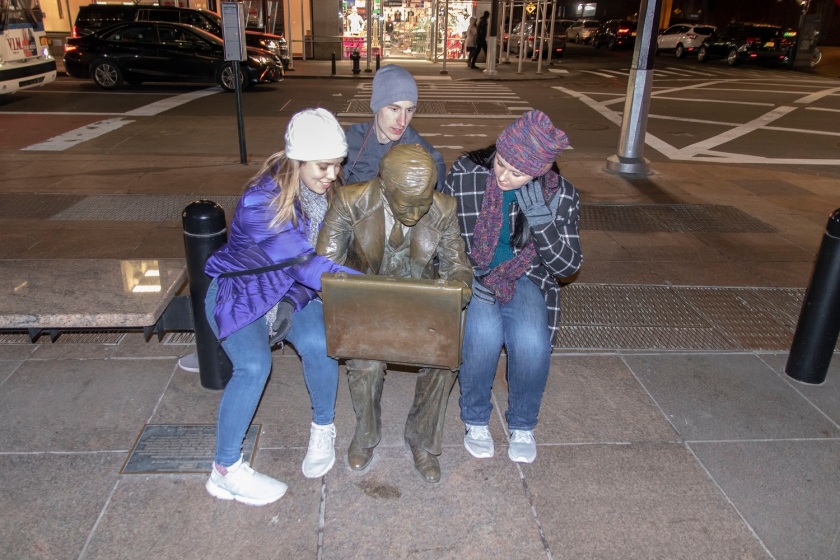 This sculpture was placed in New York in 1982 and by the turn of the millennium, the sculpture had more or less begun to blend into the landscape.  That changed on 9-11, when it was damaged by debris and covered with soot and trash.  According to at least one newspaper, emergency responders mistook the sculpture for a confused man, and approach him with an offer of assistance. 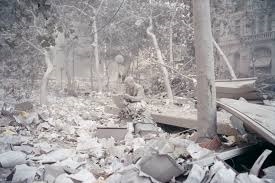 But, of course, it was “just” a sculpture.  As recovery efforts were undertaken, the sculpture was removed and kept in storage.  Eventually, the sculptor, Seward Johnson, took it back, and restored it.  Less than a year ago, the sculpture was re-located to New York City, finding its way back to its proper home.

With these new memories in mind, and having walked some 28,000 steps (about 13 miles), we headed home by subway.  Within a twenty-four hour period, we had traveled by plane, uber, subway, foot, and ferry, but we had two more adventures. We found “Federal Hall,” the first US Capital and the site where General George Washington was sworn in as President of the United States.

And, then, in a moment of serendipity, we passed a church and graveyard in downtown New York City, and on one of the more impressive tombstones, we saw the name “Alexander Hamilton.”  For this we had to stop.

Although the late night, fatigue, and the necessity of climbing a wall to take the photograph led to a less-than-stellar photograph, it was a compelling moment for us.  Less than 24 hours after seeing the site of Hamilton’s duel, we had almost literally stumbled upon his grave, in the most urban setting we had ever visited.

It was a day full of learning that came full circle.