For almost all of us, it was our first trip to New York City, and we had much on our agenda.  We arrived by plane late, but that did not deter us from taking some photos of the famous New York skyline.

One of the nice things about this view, is that is also of historical import.  We photographed the skyline from “Hamilton Park” in Weehawken, New Jersey, the site of the duel between Hamilton and Aaron Burr in 1804.

And with that, we kicked off our New York experiences.

We began by walking our way from our hotel to the United Nations headquarters, where we had a tour scheduled.  The walk also allowed us to stop at the Chrysler Building, an architectural marvel.  For 11 months in 1931, it was the world’s tallest building (the Empire State Building surpassed it), and at 1,046 feet, it remains the 8th tallest building in the city.

What really distinguishes it, however, is the Art Deco architecture.  The exterior of the 31st floor is ornamented with gargoyles and replicas of radiator caps (it is the Chrysler building!) and the 61st floor is adorned with stainless steel eagles (being a national treasure, it appropriately featured the national bird).  It was ranked 9th by the American Institute of Architects on a list of “America’s favorite Architecture.” 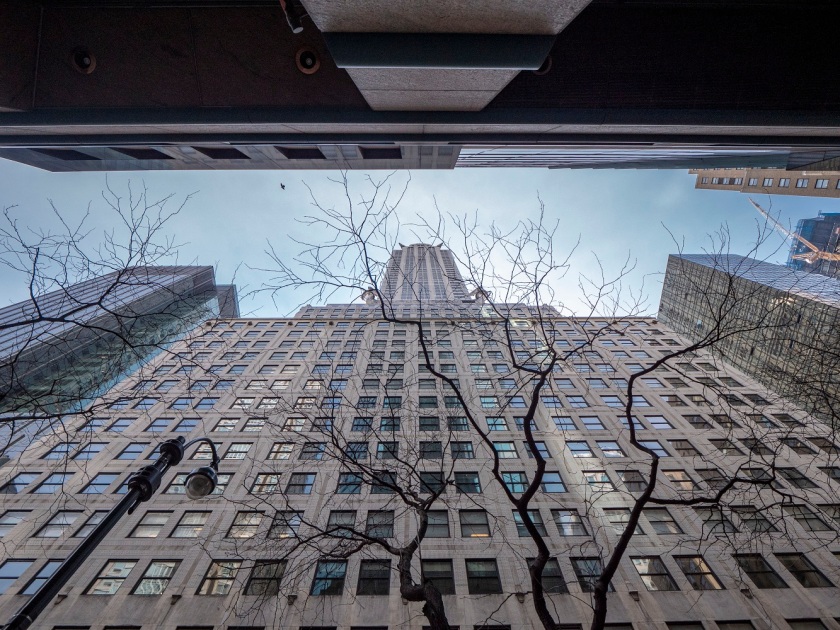 While we could only get poor photos of the exterior, we managed some nice photos on the very art-decoish interiors.

It was a nice first-stop in the city, and it prepared us for the more modern architectural landscape provided by the United Nations.

On the plaza just outside the building we stopped to see a handful of interesting sculptures, one of which was shaped like a ship, a memorial to the slave trade and its attendant horrors.  Another sculpture was to “non-violence,” and it depicted a gun with its barrel tied in a knot.  The sculptor, Carl Reutersward, completed the sculpture after John Lennon was murdered.

Inside the building, we found other interesting and historically significant items, such as a replica of Sputnik, the USSR satellite that was the first in space.

Although having a chance to explore the United Nations would always be a special treat, it was especially relevant this semester, because the LEAP Ambassadors have met two Ambassadors, and are scheduled to see two more Ambassadors, including the US Delegate to the UN.  So it is a semester, really, of learning about International Relations, directly from those who know it best.

Our tour guide, Ana, was from Spain, and she speaks three different languages, but we were on her English-version tour.   She began with the history of the UN and of the building in particular. 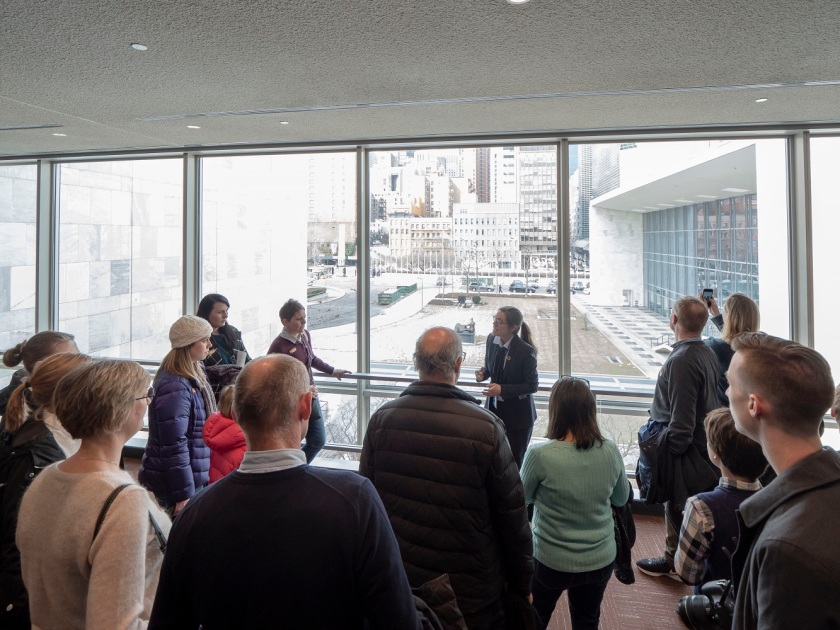 The UN was considering building their headquarters elsewhere when John D. Rockefeller Jr. donated $8.5M for the procurement of the site in New York City. Eleven different designers helped contribute to the design of the building, including lead Wallace K. Harrison (United States), and other famous architects such as Le Corbusier and Oscar Niemeyer (Brazil).

As we moved through the tour, Ana described the 30 human rights that the UN recognizes. Interestingly enough, not one single country in the world upholds all 30 of those rights.

Ana also explained the role of the UN as global peacekeepers. Peacekeepers are from member countries who go to locations that have been/or are suffering from war or natural disasters. 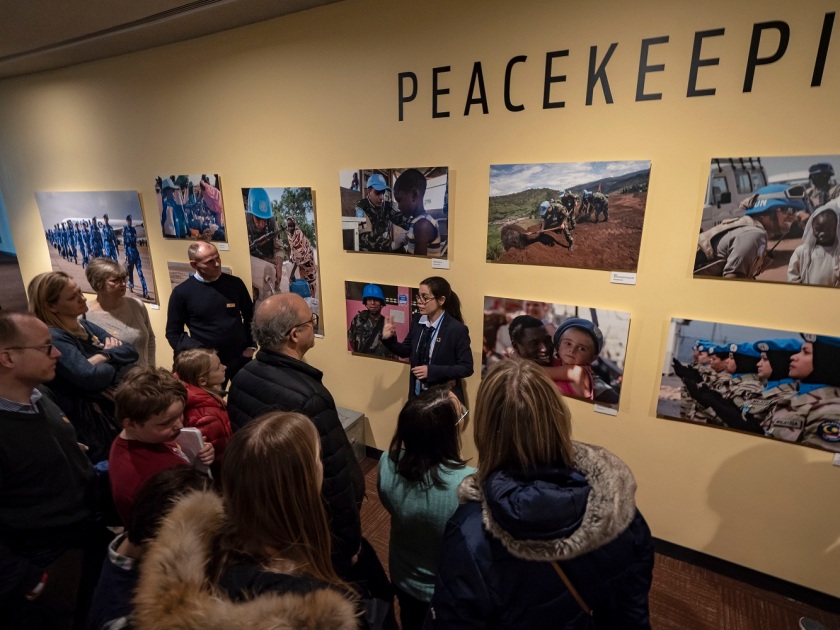 They act as buffers between countries who have established ceasefires, and although the peacekeepers carry weapons, they do so only for self-defense or to enforce the ceasefire. An interesting fact about the UN Peacekeepers is that they wear their country’s uniforms, but they all wear bright blue hats that signify they are representatives of the United Nations.

The UN was filled with art, but a piece that particularly caught our attention was a mosaic made of Murano glass and, interestingly, based on Norman Rockwell’s famous “Golden Rule.”  The mural was purchased by the US, but created by six Italian artists and given to the UN for its 40th birthday. 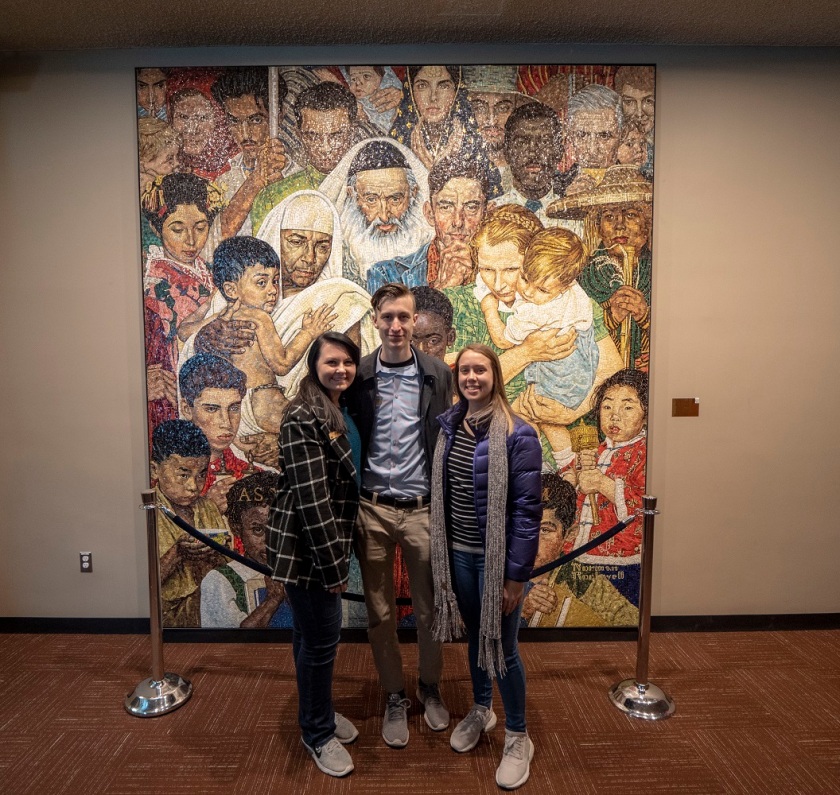 This was great foreshadowing for us, as we have been researching Rockwell and will be visiting the Norman Rockwell Museum while on our American History Tour.

We were fortunate enough to access the General Assembly room.

Inside were two paintings by Fernand Léger, one of the world’s most famous artists and, incidentally, a man who taught Huntsville’s own David Adickes. (David Adickes is known around Huntsville for “A Tribute to Courage,“ known locally as “Big Sam,” the giant sculpture of Sam Houston on Interstate 45.)

Léger’s paintings in the General Assembly are abstract, as Ana explained, each member has the opportunity to see the same painting, but interpret them differently, just as each of these countries see the world differently.

Leger’s art was intriguing, all the more so since we knew we’d be seeing more of his work at the four New York City art museums we’ll be visiting over the next three days.

After milling about the General Assembly for a bit…

…and then proceeded to visit some more amazing artifacts, such as this statue, which “survived” World War II, despite being about a third of a mile from ground zero in Nagasaki when “Fat Man” landed, killing about 80,000 people.  The church which housed this sculpture was destroyed.

We saw some additional art…

…checked in to a “Meditation Room”… 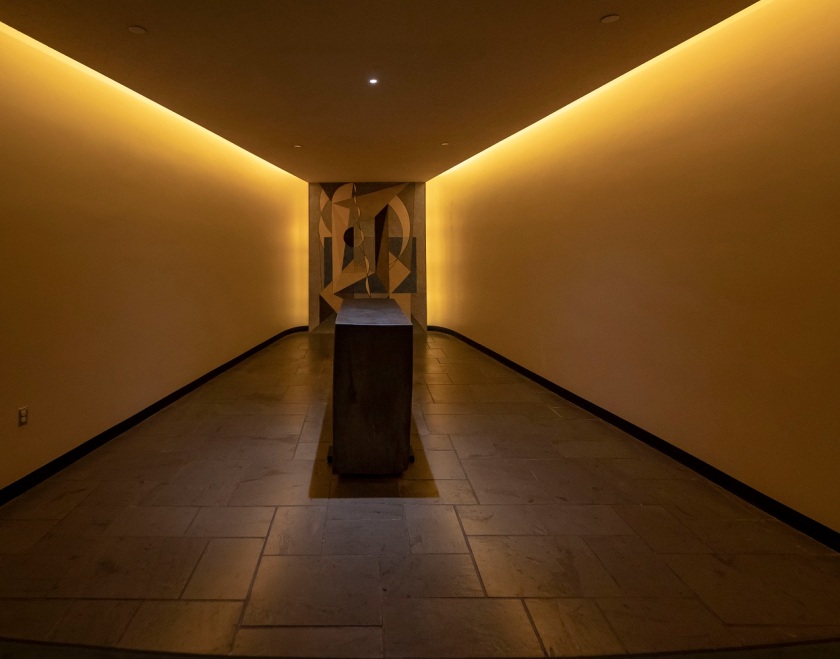 Before leaving, we stopped into an impressive gift shop, lingered for just a bit on Le Corbusier’s UN Staircase… 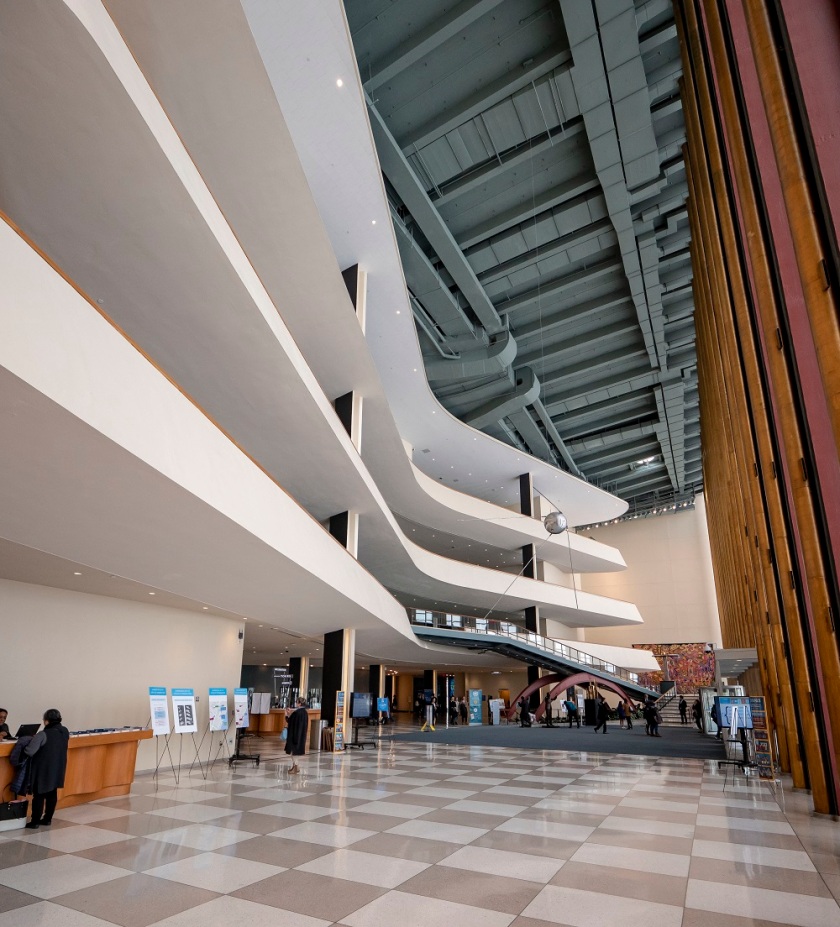 …and then headed to our lunch destination.

Consistent with our endeavor to eat in places that reflect the local cuisine or otherwise expand our cultural experiences, we ate food from all over the world at the Amish Market. The diversity and extent of the food options were inversely related to their seating availability, part of the New York Dining Syndrome (NYDS) that afflicts all unknowing tourists, such as ourselves.

Despite needing to sit at separate tables, we enjoyed the meal, which provided much-needed calories, all the more so since our next stop was a walk across the Brooklyn Bridge.  Stay tuned!