Our third day on the Little Rock trip promised to be among the most invigorating, with Civil Rights and a little Broadway-themed culture on the agenda.

After a quick coffee and pasty breakfast from Community Bakery, we were off to our first stop—The Little Rock Central High School Museum. Built in 1927, the Little Rock Central High School cost $1.5 million dollars to construct and, at that time, was named America’s Most Beautiful High School. While still beautiful, the school would bear witness to ugly times. The museum is located just across the street from the school, and although small, it was packed with history and personal stories.

In 1954 Brown v. Board of Education, a landmark Supreme Court case, overturned the “separate but equal” doctrine and called for the desegregation of all schools in the nation. After, the National Association of the Advancement of Colored People (NAACP) attempted to register black children in all-white schools. The NAACP selected nine black students–soon to be referred to as the “Little Rock Nine”–to register at the all-white Little Rock Central High School.

The Little Rock Nine were Melba Pattillo, Minnijean Brown, Elizabeth Eckford, Ernest Green, Gloria Ray, Carlotta Walls, Thelma Mothershed, Terrence Roberts, and Jefferson Thomas. These nine teenagers didn’t know it at the time, but they would be famous for their bravery in the face of adversity.

In Arkansas, many people believed that the schools should stay segregated and that the national government should not be able to decide how to run the schools. Word spread that there would be protesters that would try to physically block the black students from entering Little Rock Central High School. When the Arkansas Governor Orval Faubus heard of the potential protests, he ordered–under the guise of “safety”–officials to prevent black students from entering the school.

September 3, 1957 was the first day of class, and a mob formed outside Little Rock Central High School. On September 4, the Little Rock Nine attempted to enter the school, but the Arkansas National Guard did not permit them entrance.

It took over two weeks for the Little Rock Nine to actually step foot inside of the school. They were each escorted by the Little Rock Police, while an angry mob screamed, spit, pushed, threw bricks, and hit people with bats.

“The harder they fought to keep me out, the more determined I was to finish and get my diploma.” – Jefferson Thomas, Little Rock Nine

The rioting worsened in the next few days and on September 24, President Eisenhower federalized the Arkansas National Guard and sent 1,200 troops (the 101st Airborne) to Little Rock.

With the support of the troops and federal officials, the Little Rock Nine could finally go into school safely–although they still faced hostility from students.

“I got up every morning, polished my saddle shoes, and went off to war.” – Melba Pattillo, Little Rock Nine

On May 25, 1958 Ernest Green of the Little Rock Nine graduated from Little Rock Central High School.  The other eight soon followed, and all turned into successful professionals.

The museum  touched on diverse aspects of civil rights, paying respect to other groups that faced repression and unequal treatment.  There were small tributes to Cesar Chavez, Rosa Parks, Martin Luther King Jr., and other important figures of the civil rights movement.

After enjoying the museum, we walked across the street and took pictures in front of the famous high school.

We admired how beautiful the building was and discussed what it was like to stand where the “Little Rock Nine” once stood.

With much to reflect on, we headed to lunch, where we could further discuss the progress on–and obstacles to–civil rights. 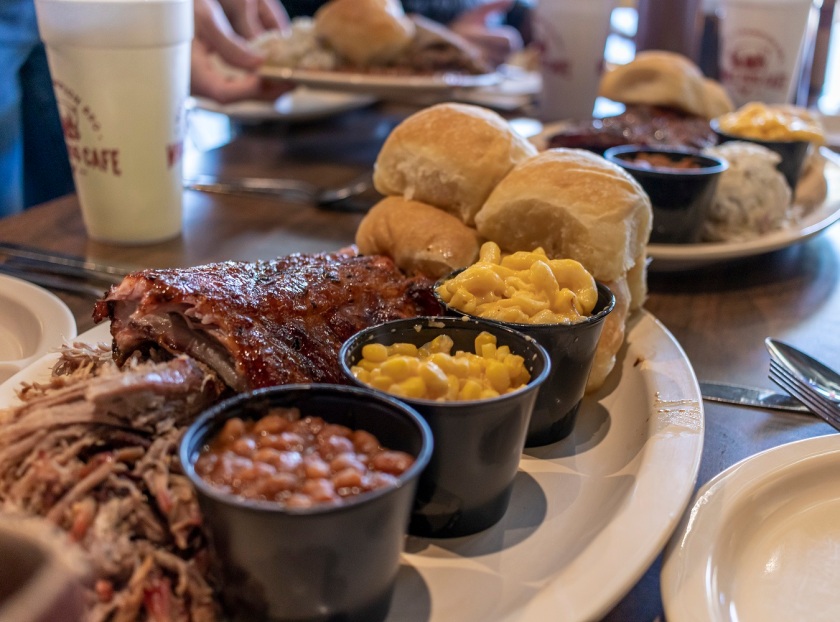 As we walked in, we were greeted with hogs –everywhere. After ordering, we sat at our table and were excited to test try the six different barbecue sauces. They ranged in flavor and style, ensuring that everyone was bound to at least enjoy one. A common favorite the table could agree on was the Sauce #2: Tangy and Slightly Spicy, and Sauce #5: Sweet & Bold.

It was only right that we tried each meat offered: signature sausage, chopped and sliced brisket, chicken, pulled pork, and the much-loved ribs.

The food was wonderful, with the ribs, the chopped brisket, and the pulled pork being the favorites–all of which were soaked in the #2 or #5 BBQ sauces.  The potato salad and beans were also wonderful.  So wonderful, in fact, that we overate and had to find a way to re-invigorate for a full afternoon and evening of education.

We had to split up the group in the afternoon because our main attraction–Wicked–did not have sufficient tickets remaining to fit us all into one show.  So….we dropped off Esme and Miranda to the matinee show, while the rest of LEAP headed to the MacArthur Museum of Military History.

Named in honor of Douglas MacArthur, the Museum highlights Arkansans’ roles in the various wars in American history, while also illuminating MacArthur’s accomplishments.

Before he even reached the age of 23, MacArthur had already distinguished himself as a military prodigy, graduating as the valedictorian for West Texas Military Academy and graduating top of his class at West Point. Following WWI, MacArthur returned to West Point as the school’s youngest superintendent since 1817. He restored student morale following World War I by revolutionizing the curriculum and campus life.

In June 1923, MacArthur assumed command of the 23rd Infantry Brigade of the Philippine Division, and by January 1925, Douglas MacArthur became the Army’s youngest major general. Before being promoted to general in 1941, Roosevelt named MacArthur commander of the United States Army Forces in the Far East. A brilliant strategist and leader, MacArthur was instrumental in winning WWII for the Allies.

The museum featured several levels of American Military History, starting with the Civil War and ending with Vietnam. I particularly enjoyed any and all exhibits on WWI & WWII, but I also enjoyed learning more about the Civil War (after visiting the Old Mill from “Gone with the Wind”) and the showcases of Civil War era guns and ammunition.

Apart from specific wars, we learned more about the Jeep’s role in military history…

…had a chance to see what a portable altar kit for a Chaplain consisted of…. 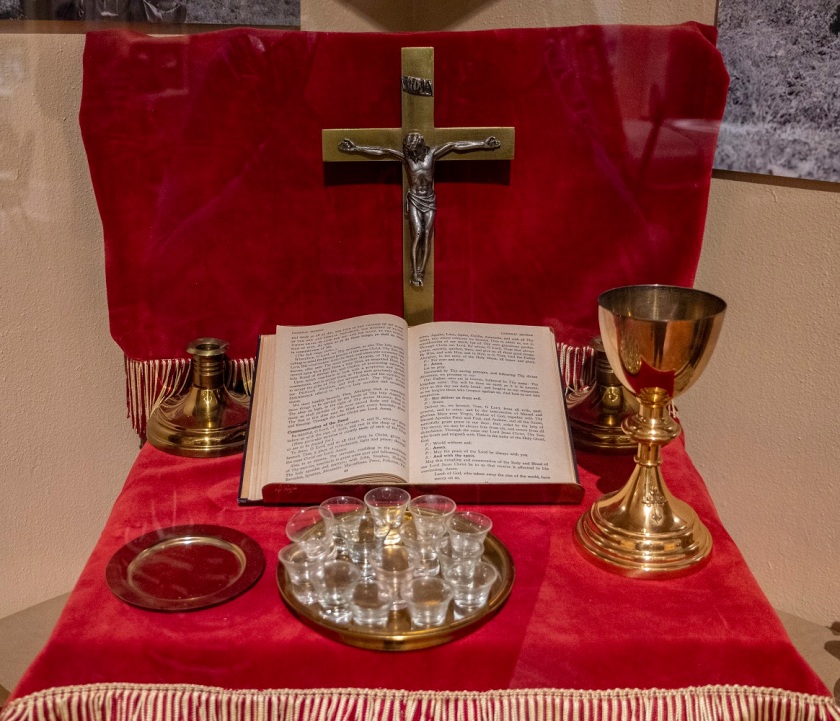 …and learned much about the role of the media during wartime.

Armed with all sorts of new information about military history…

…we headed back to the hotel to fight evil: or, at least watch it, in the evening showing of Wicked!

We couldn’t have been happier with the performance of Wicked, which was featured at the Robinson Center Music Hall in Little Rock.

Full of references to the classic American film, The Wizard of Oz, Wicked is the musical prequel that tells the tale of how the characters of Oz came to exist as we know them. 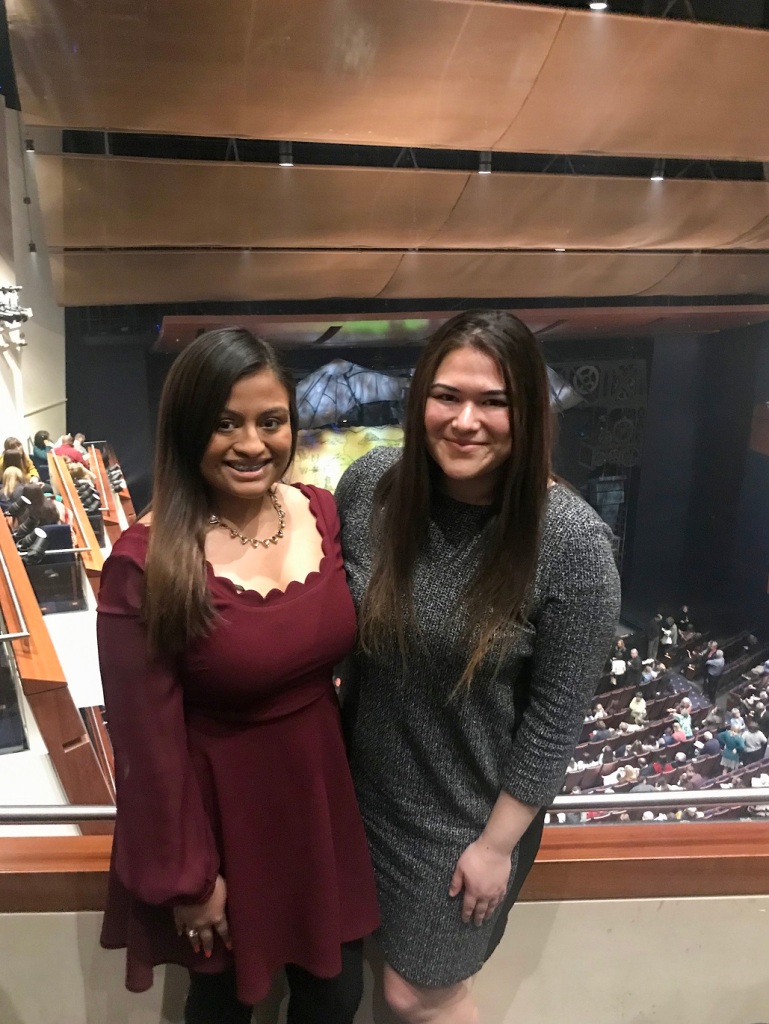 Focusing on the film’s villain, the Wicked Witch of the West, the show features a message that we found apt considering the rest of our day’s itinerary. Reminded this morning of the history of Little Rock Central High School, of the importance of being tolerant and accepting, we found ourselves immersed tonight in a tale about accepting who you are, regardless of how others may view you. Keeping with our day’s theme of identity and perception, the story of Wicked provided us with a heartfelt depiction of the dangers of mob mentality, the importance of seeking the truth, and the value of overcoming injustice.

Beyond the message of the story, the show’s production was superb. The songs were sung with power and gusto; the choreography was exciting and picturesque. The set and costumes were phenomenal and creative, immersing us into the world of Oz. Overall, the LEAP Ambassadors enjoyed the show, and we applaud the mastery of Stephen Schwartz, who composed the memorable and groundbreaking music of Wicked.

After the show, we headed back to our hotel to eat our last meal of the day. We enjoyed three different flavors of pizzas, including a vegetarian pizza, a meat-lovers pizza, and muffaletta pizza from Vino’s Brewpub. With our satisfied dinner and the amazing show by Wicked, we were off the bed to rest for our last and busiest day.