Journalist Bill Wheeler has done reporting in some of the most dangerous parts of the world, including Libya, Syria, Venezuela, and El Salvador.  His focus last week, when we saw him at another fantastic World Affairs Council event, was El Salvador and, specifically, the role of MS-13.

After saying hello to the wonderful WAC staff, we took our seats in the front row as Basmah Ghauri, Director of International Programs for WAC, gave a brief introduction of Mr. Wheeler and the event began.

Wheeler handled each question with answers backed by careful thought and plentiful knowledge. He spoke of his experiences in El Salvador doing research on the most vicious gang in the region: MS-13.

Before they were a deadly gang enlisting over 30,000 members worldwide, MS-13 formed in Los Angeles when a couple of Salvadorian immigrants began facing threats from gangs in the area. Wheeler elaborated that these immigrants were in fact refugees fleeing from a bloody civil war back home. Once established, MS-13 opposed many rival gangs in the gun-and-drug markets as well as on the streets.

Mr. Wheeler spoke of his time in Central America. He said that when the civil war ended in El Salvador, MS-13 took power and mounted an aggressive offensive on the government and law enforcement. Soon enough, they had all of the policemen and politicians on their payroll. No one would dare confront them. He said that he and his crew had to drive slowly through neighborhoods with the windows down and interior lights on so that gang members could be sure they didn’t pose a threat. Wheeler pointed out that Salvadorians who attempted to snitch on the gangs often faced dire consequences, which, in turn, led to crackdowns from law enforcement–in turn, creating an upsurge of gang violence. He called this the “Revolving Door of Violence”. 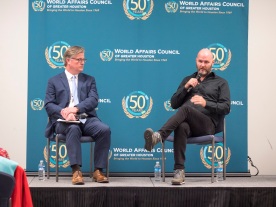 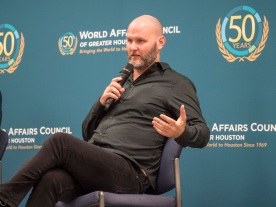 Wheeler’s responses were eloquent, and his courage left us impressed. We felt fortunate that we were able to hear his experiences.

Following the event, we got Wheeler’s new book on the topic, “State of War: MS-13 and El Salvador’s World of Violence.” 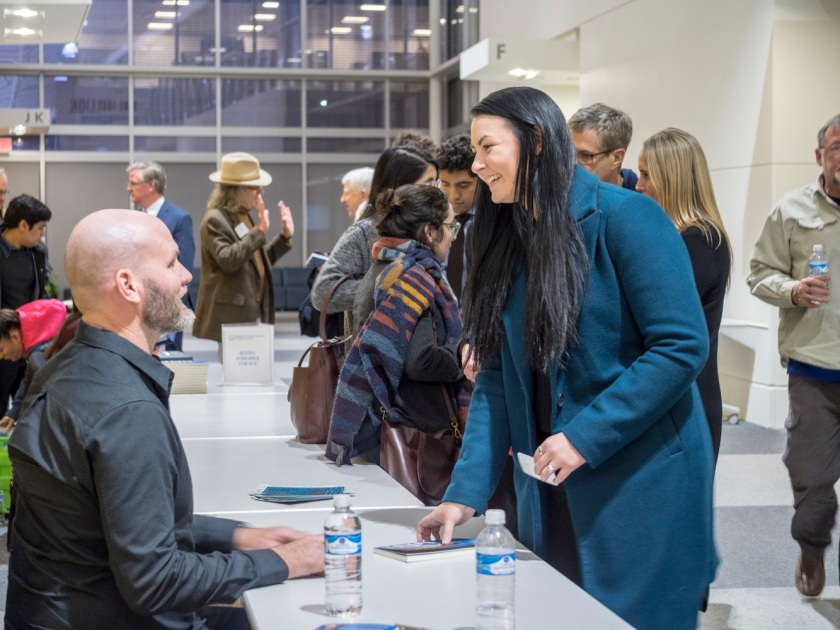 And took a quick photograph to commemorate our attendance at the event.

Fittingly, we decided on Salvadorian food for dinner. Specifically, Gloria’s Latin Cuisine off of Louisiana Street. Since we spend a lot of time in the Art District, we were familiar with the exterior, and we had heard many good things about the food they serve as well. We must have had the best table in the restaurant, too, because right above our heads was a beautiful light sculpture chandelier very reminiscent of Chihuly. 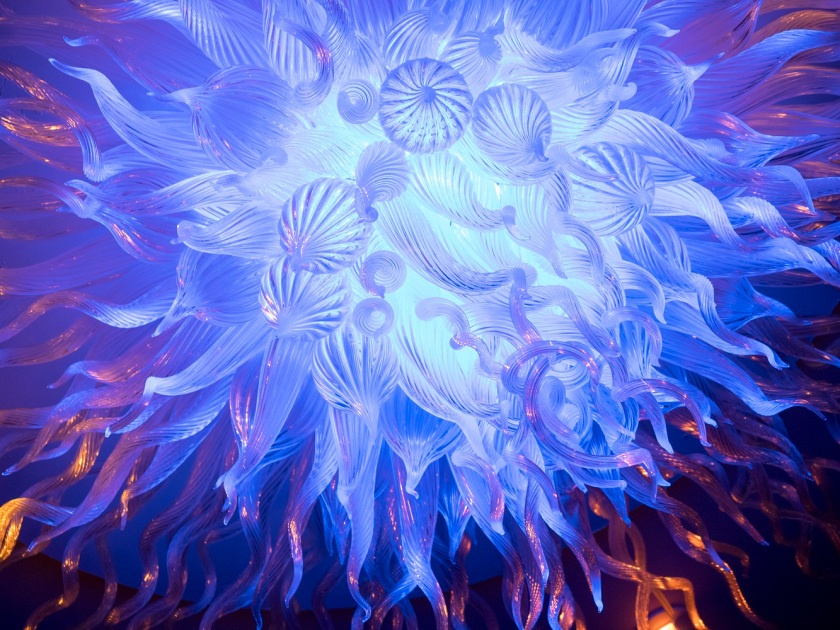 Best of all, the light in the center of it changed colors and gave us beautiful hues of purples, blues, and greens.

The food was impressive as well. I could have eaten the beans and salsa as a meal, but I’m glad I didn’t because my churrasco (broiled steak) was phenomenal. I split it with Maggie who got the garlic shrimp.

Also around the table were papusas, Salvadorian tamales wrapped in banana leaves, and more steak. For dessert, we spoiled ourselves with the tres leches, the chocolate turtle brownie, and the honey vanilla plantains.

Impossibly, we managed to get up from our table and waddle out the door, eager for the next time we would get to come to Houston again to see the World Affairs Council and eat delicious food!