Another organization that has aided LEAP’s efforts to stay active during this time of uncertainty and isolationism is the Scowcroft Institute of International Affairs at the Bush School of Government and Public Service.

Tuesday evening, a handful of ambassadors logged onto Zoom yet again to hear the latest updates on COVID-19, and an overview of the anticipated strategy to combat the virus. The information was presented by the Institute’s Pandemic and Biosecurity Policy team, which was represented by Dr. Gerald Parker and Dr. Christina Crudo Blackburn, with the Institute’s director, Professor Andrew Natsios, moderating.

The discussion began with a recap of what is already known about the virus, including that COVID-19 can cause acute respiratory distress syndrome (ARDS), and that it can impact people of all ages.

We also got a more in-depth understanding of the factors that put people at risk. As it was explained, hypertension was a factor in 75% of COVID-19 related deaths in Rome. Diabetes can lead to an increase in ARDS, and is responsible for 40% of deaths in Louisiana. Smoking and vaping were also noted as a potentially complicating factor, but no conclusive evidence can support this yet.

I was particularly interested to learn about the different types of tests that are currently being utilized or developed. The first test discussed was the real-time polymerase chain reaction test (RT-PCR), which can allow individuals to find out within a number of hours whether or not they are currently infected. Unfortunately, it does not indicate whether or not they have been exposed to the virus, and potentially carrying it. This is where the serological test becomes beneficial: by testing for antibodies that would indicate exposure, people can better determine whether or not they should self-quarantine.

Dr. Parker proceeded to explain his understanding of the National Strategy to combat the virus. According to his analysis, we are currently on Phase 2 of 5, which consists of mitigating the spread and severity of COVID-19, as well as negative economic impacts, maintaining critical operations, and providing support, logistics, and equipment to states. 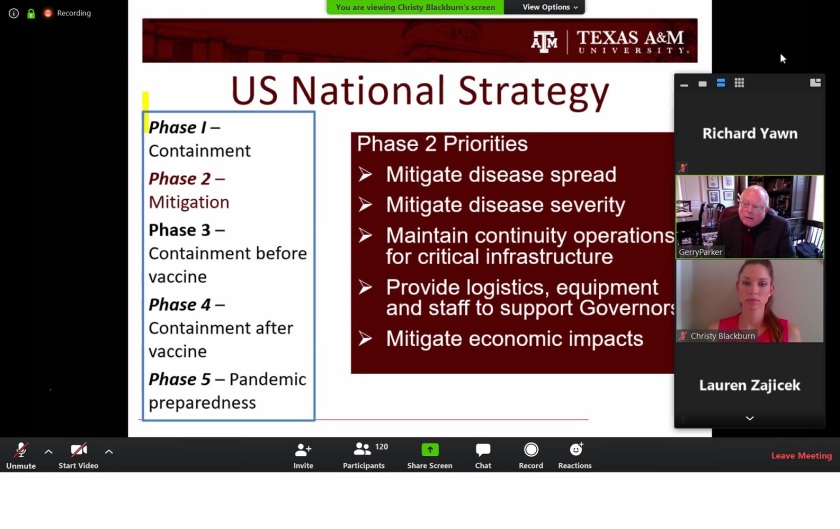 Going forward, we were informed that the United States still has not reached a peak in the amount of cases or fatalities, and that the best tool to continue to mitigate the spread remains to be social distancing. We do not yet have a vaccine or antibiotics, so the best solution currently is to avoid contracting and spreading the virus. 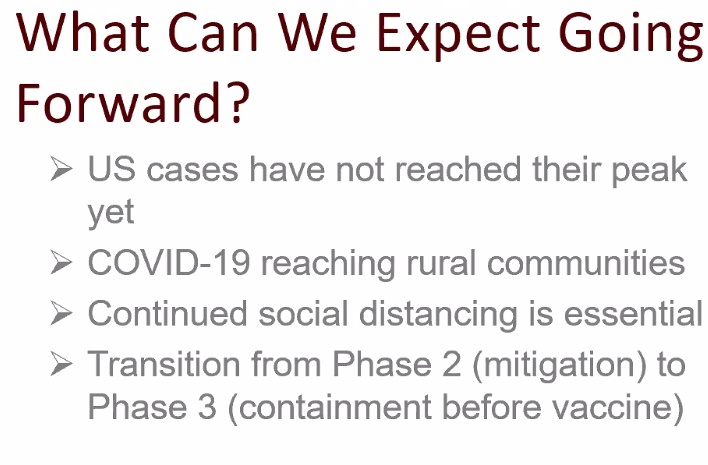 We were then informed about the steps Texas A&M is taking to help out. Many departments are coordinating with each other to allow for all resources to be available. Some of these include establishing an emergency advisory group that focuses on policy, emergency response, and logistics, and having faculty in the Department of Engineering 3D print ventilators.

During the Q&A, there was a difference of opinions on how the government has handled addressing the virus. Dr. Parker believed that response has been phenomenal on all levels, while Professor Natsios believes the government has been sending mixed messages from various levels, confusing communities and individuals.

The session ended with a PowerPoint slide reminding us all to “BTHO” Coronavirus. We appreciate the Bush School and the Scowcroft Institute for giving us the chance to learn more background about the virus, and what is being done to find a solution.