Our second day in OKC was a busy one, but that didn’t prevent us from enjoying some food and fun in this Southern/Midwestern city.  In fact, we had a chance to explore Bricktown, Guatemalan food, and even ice skate!

For lunch we decided to try out some authentic Guatemalan food at Café Kacao. Before being seated, however, we waited outside the restaurant chatting, a result of the eatery’s popularity. This wait, a bit lengthy, was worth it. The music was upbeat and the interior was very colorful.

Looking at the menu, we were mystified by the many options we had before us. Drinks alone were provided by lot of different choices, from juices, to Mexican sodas, and specialty drinks like the Horchata latte ( a sweet mixture of rice milk, vanilla, cinnamon and coffee). In the end, we ordered Migallas, cochinito pibil, adobada, and even crab pupusas. 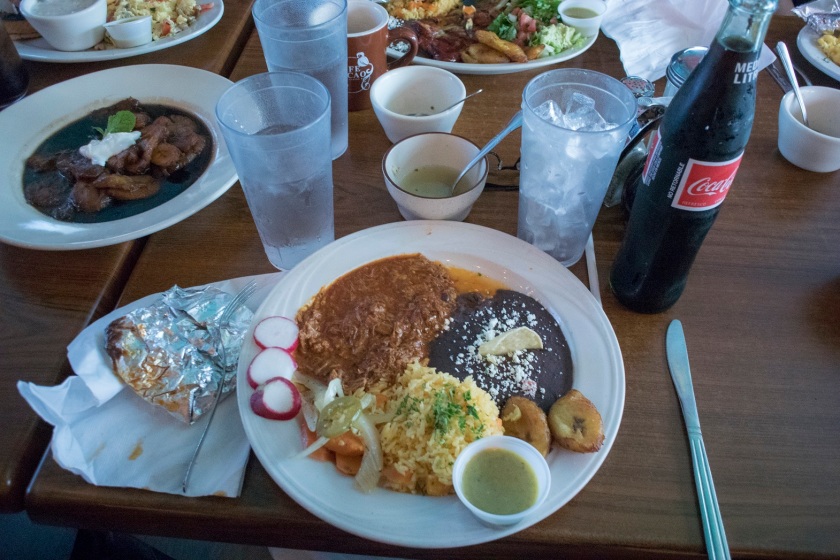 Ashely’s favorite dish, the Migallas, was a breakfast dish composed of scrambled eggs, various vegetables, Pico Del Gallo and crushed tortilla chips mixed together, accompanied by a small fruit cup and black beans. The plate was so delicious that she practically wiped it clean, a feat that has eluded many of us during this feast-filled-trip.

For dinner, we ventured into the city’s river walk. Following the foot steps of the Sooners, or at least the direction of Paul Moor’s sculptures, we began our trek to the Land Run Monument. With friendly chatter and a shining skyline, we followed the soft, rippling river, and before we knew it, we had reached the city’s Bricktown District.

The historically industrial district turned social district, with it’s bright lights, quirky sights, and lively music, was eye candy so as to make us hungry. After walking a lap around the square, where we saw a Mickey Mantle statue…

…and even a statue of Sisyphus… 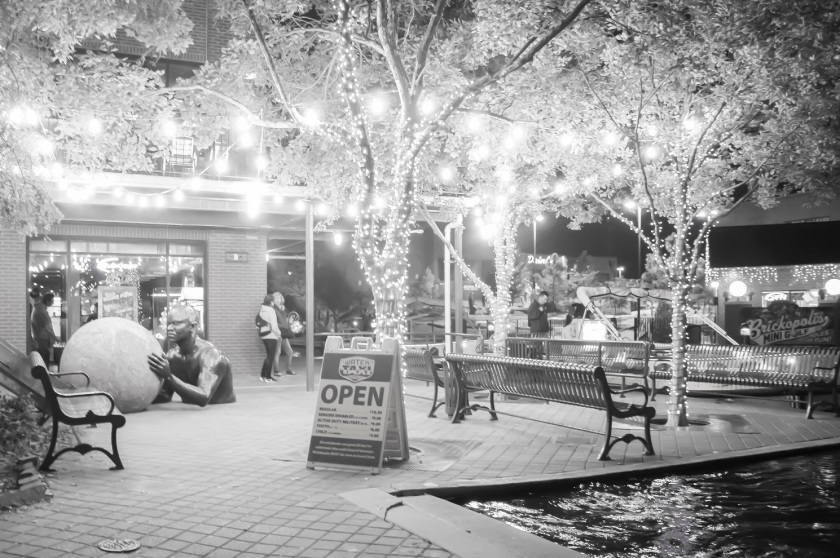 …we stopped by a restaurant called the Bricktown Brewery. It was  different from the other places that we had eaten during the trip, strictly because it wasn’t an authentic, ethnic-based restaurant. The majority of the group ordered different pizza pies to share amongst ourselves. Ryan’s favorite was the combination pizza which had morning sausage, pepperoni, and ham, topped with additional mushrooms, onions, and bell peppers. The experience here was excellent and if ever in Bricktown again we would definitely go straight to this great establishment. As Ashley commented “every place we’ve eaten in Oklahoma has been such a great experience, and I really appreciate the exposure to the different cultures and the food that goes with them!”

Slipping Through the Ice Rink (Ryan)

After our meal, we walked the few blocks to the Myriad Botanical Gardens, where we took advantage of their skating rink. With Professor Yawn’s instructions all of the LEAPsters and Ryan laced up and took to the ice. 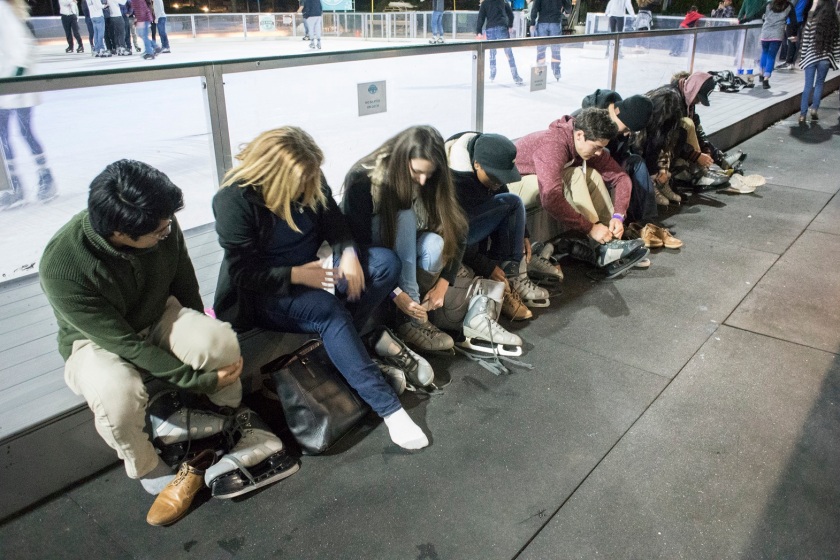 Although it was a small rink, it seemed to take some of us forever to make a full lap, whether it be because we were holding onto the rails or we couldn’t seem to get any momentum. 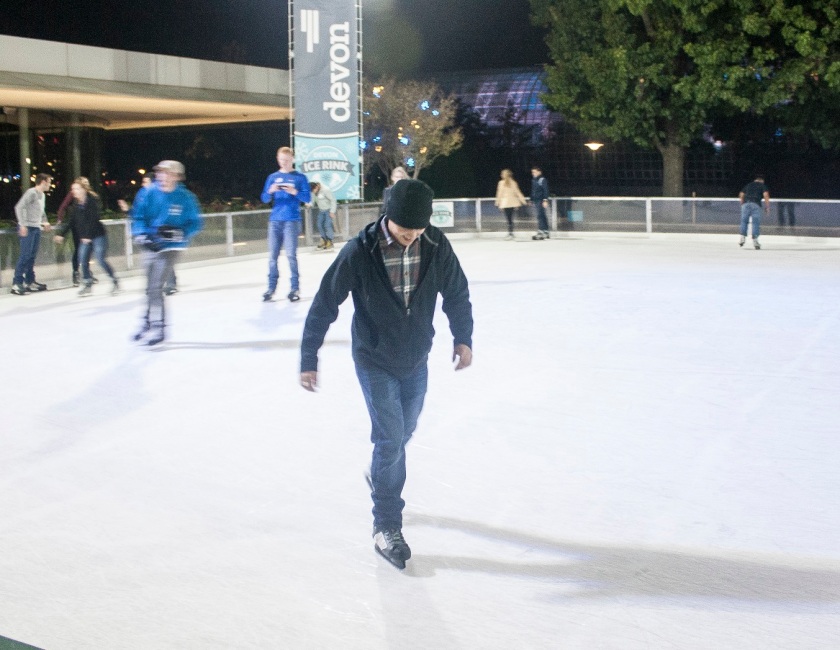 Some us, however, performed our very best skating abilities. For example, Brian accidentally did his best impression of Charlie Chaplin while sliding and slipping through the ice.

He would seem to fall for about ten seconds and then catch himself on the railing in a cool and relaxed position as if nothing had happened. We only stayed for a little while, as the air grew colder and our feet began to ache. It was unclear as to the professor’s motivation to bring us to the rink, whether it was to expose us to a sport we seldom have a chance to practice or for his own amusement to look at us fall and tumble.

Perhaps his absence at the rink was indication to the latter hypothesis.

…and Ashley and Ryan even raced, with Ryan’s longer legs providing the edge.

No matter the falls on the ice, we all had ice-loads of fun. With iced backs (from those that had fallen on the ring), we walked back to the car and headed back to the hotel. As a day well spent in learning, exploration, and vigorous sport, we welcomed our bed with a tired, melancholy sigh, for tomorrow would be our last day of our Texoma Adventure.