Like most Americans, we are largely geographically illiterate, and there is a whole lot we don’t know about the New England States.  But to paraphrase Mark Twain, “travel is the enemy of ignorance,” and we are poised to learn much about Connecticut today.

Our first stop in Hartford was the house of Samuel Langhorne Clemens, better known to most as the author Mark Twain. He and his new bride Olivia moved to Hartford in 1871 and lived in a rented house while they waited for their own home to be completed. The house ended up costing much more to build than he originally thought–double the original estimate of ($20K) and furnishings ($60K). Even though this frustrated Clemens, he was incredibly happy with the results.

Their four children were born and grew up in the house, where they were next-door-neighbors with Harriet Beecher Stowe, author of Uncle Tom’s Cabin. Financial problems caused the family to move in 1891, and while they hoped to one day return and live there again, that never came to fruition.

It was inspiring to tour the beautiful home (more like a mansion) where Clemens/Twain lived while he wrote some of his best-known works: The Adventures of Tom Sawyer, The Adventures of Huckleberry Finn, and The Prince and the Pauper. (He had only one book to his credit before moving to Hartford: The Innocents Abroad.)  We entered the house as guests would have back in the day, and we were shown through to the library in which he told stories to his children every night. The children had rules for his stories, requiring that he use the items on the mantlepiece in his stories, and the items had to appear in the story in the same order that they were set on the mantlepiece.

We wound through the parlor, the drawing room, the dining room, the upstairs bedrooms, and even the servants’ quarters, but the most interesting room was saved for last. The third-floor billiards room was as beautiful as the rest of the house, but it was twice as interesting because that is where Clemens did most of his writing. Clemens would often play billiards to cure writer’s block, and when an idea would strike him, he had to write it down immediately. The story was told that there were frequently scraps of paper strewn across the billiard table and room with his ideas written all over them.  We left the house through the downstairs servant’s entrance, stopping to pose for a picture in front of the house before we walked next door. 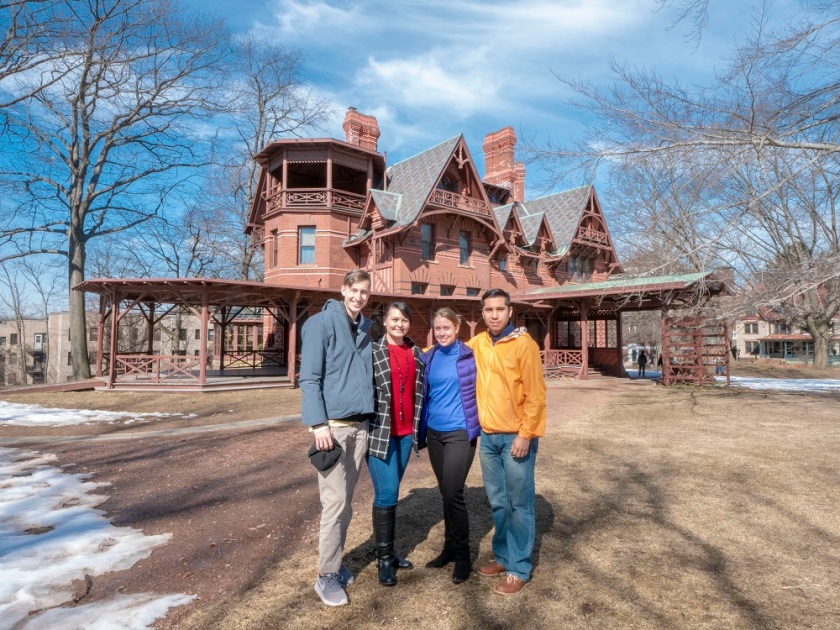 And with Harriet Beecher Stowe’s house just next door, we knew we had to get a photo there, too.

From a distance, approaching via the highway, we could see the golden dome of the Connecticut State Capitol. The building has a similar Victorian Gothic style to the New York State House. The Capitol, opened in 1878, is nestled next to Hartford’s 41-acre Bushnell Memorial Park. 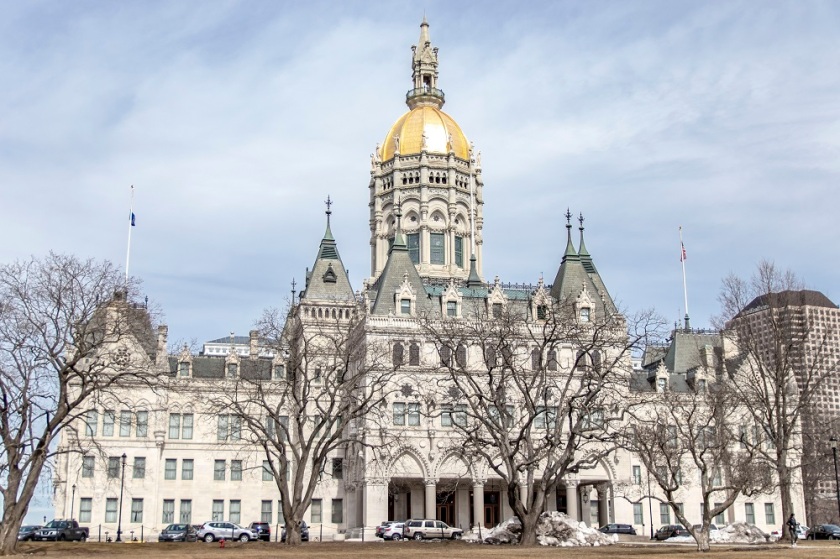 We entered through the Legislative Office Building, and were warned that, with both chambers in session, with public hearings ongoing, and with special events such as the Girl Scouts Day at the capitol, we would probably be unable to see certain areas of the building. Needless to say, it was a busy day at the Capitol.

Once we were cleared by security, we waited for our guide, who led us out to the first floor’s Wall of Honor. There, we saw statues, pictures, and medals of distinguished Connecticut service members who served in the armed forces.

We stopped at several statues.  Our first stop was to learn about State Heroine, Prudence Crandall.

She was a progressive educator during the 19th century who taught an integrated classroom.  When locals objected and took white kids from the classroom, she stayed, continuing to teach African Americans.

Nathan Hale is the State Hero for being a spy for General George Washington during the Revolutionary War. Though he was eventually caught and executed at the young age of 21, his last words were said to be: “I only regret that I have but one life to lose for my country.” The Forlorn Soldier, believed to be the nation’s oldest carved soldier figure (estimated at 144-147 years old) was in the front lobby of the Capitol along with the Genius of Connecticut which is a symbolic figure, the protector of the state.

We proceeded to the House of Representatives’ chamber. Luckily, they were on recess by the time we reached the public gallery, so we were able to enter. Representatives sit by political party with Republican members sitting on the left and the Democratic members on the right. With towering ceilings and golden state seals decorating the floor, the view from the gallery was absolutely stunning.

Across the hall was the State Senate’s chamber, originally the location of the library before being converted. Inside the room were thirty-six desks in a circle. On the right presided the Lieutenant Governor, in a highly ornate chair carved from the State’s charter oak tree.  This chair is referred to as the “wishing chair,” because the LG is said to be ‘wishing’ to be governor. Another unique piece of memorabilia was a water fountain that was used at one point in the 1800’s to fill buckets of water for the legislator’s horses.

Towards the end of our tour, we went through a Hall of Flags, where battle flags of the state’s regiments are stored, ranging from the Civil War through the War on Terror, along with a Hotchkiss Revolving Cannon (used against the United States during the Spanish-American War).  We also saw a tree that had been riddled with shrapnel during a Revolutionary War battler. 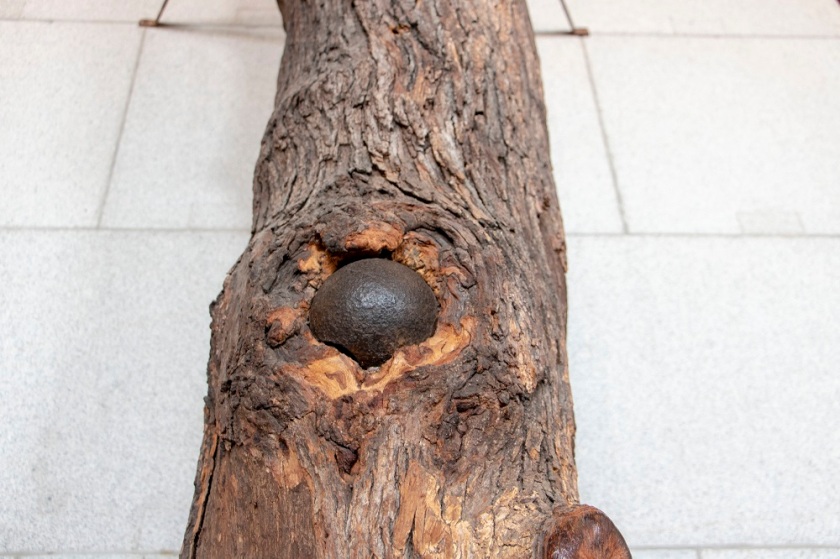 We were amazed by the State House’s rich history and distinguished heroes, but, at the same time, we were famished, and needed to press on.

Republic at the Linden – Makayla Mason

For lunch, we walked to the nearby Republic at the Linden. One of the owners, Chef Steven Wolf, once worked for Gordon Ramsay at the London Hotel in New York!

Once inside, the restaurant’s unique style became more apparent, and especially when we were seated at our table.  Our space had upside-down table lamps for lighting and exposed bolts protruding from the table in some strange places.

We ordered the house-made guacamole and chips for the table and then chose our entrées:  Makayla and Sawyer ordering the Thomas Hooker Battered Fish & Chips; Victoria opting for the BLTA with a side of delicious truffle fries; and Francisco selecting the blue cheese burger.  The food was great!

Already impressed with the Hartford town square and state capitol, we had high expectations for the Wadsworth Atheneum Museum of Art. Immediately, our expectations were met when we saw the Calder piece entitled “Stegosaurus” proudly guarding the area in between the public library and the art museum. (Later we found out that property and the Calder are not owned nor a part of the Wadsworth, but we still liked both.)

Also outside was a sculpture by another familiar artist, Tony Smith, whose work we saw on this trip by The Egg: Center for Performing Arts in Albany’s downtown Empire Plaza.

One of the Wadsworth’s special exhibits was by sculptor and painter Sean Scully, with a large piece outside on display as well. 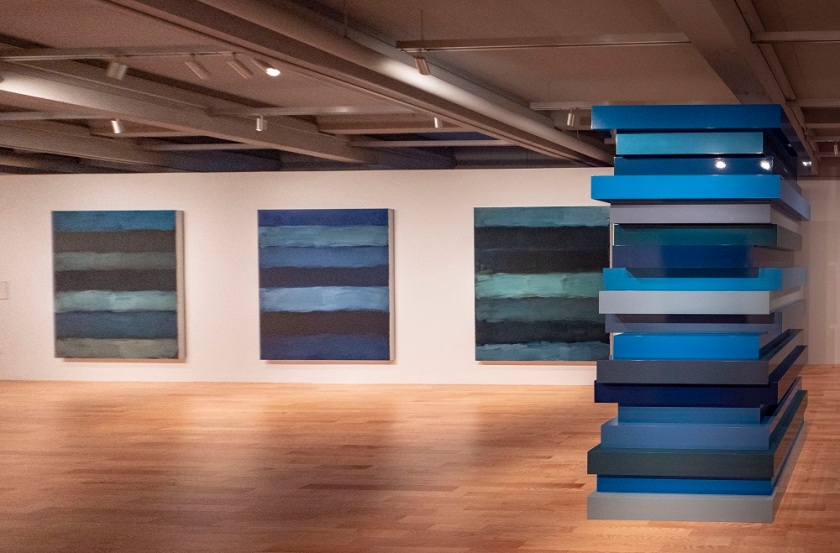 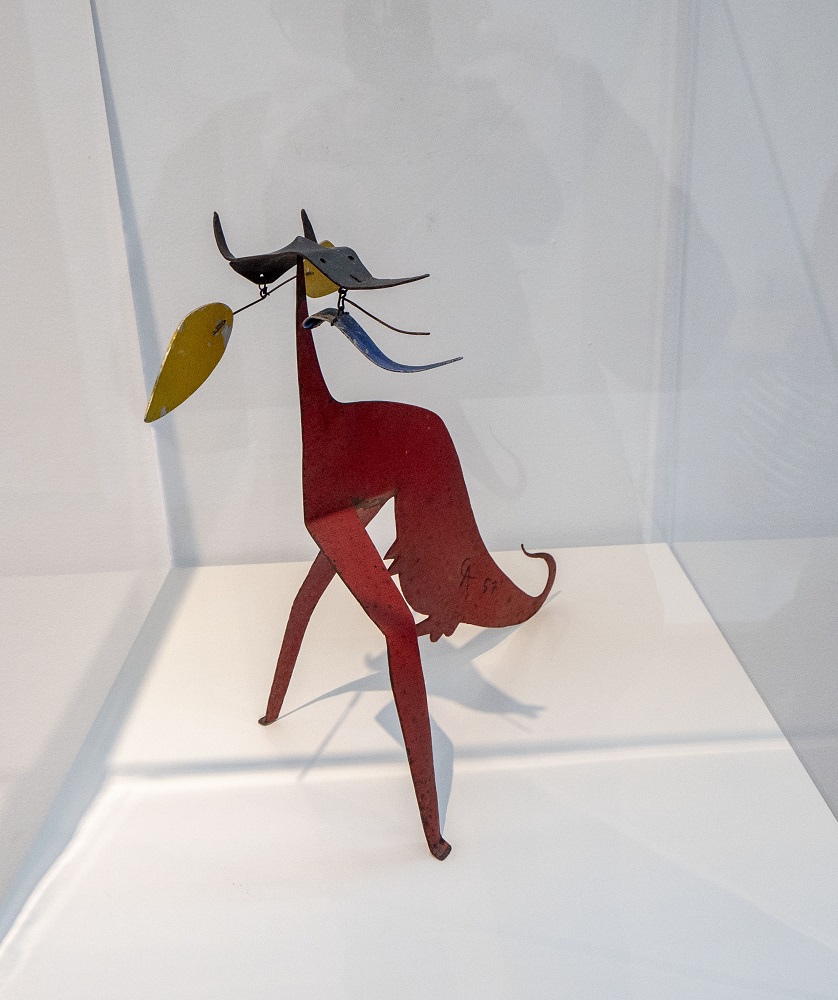 …a furniture set designed by Frank Lloyd Wright, and many pieces by masters of The Hudson River School such as founder Thomas Cole.

The second floor featured European artists from all genres of art. We saw originals by Monet…

and Matisse and a Van Gogh self portrait. 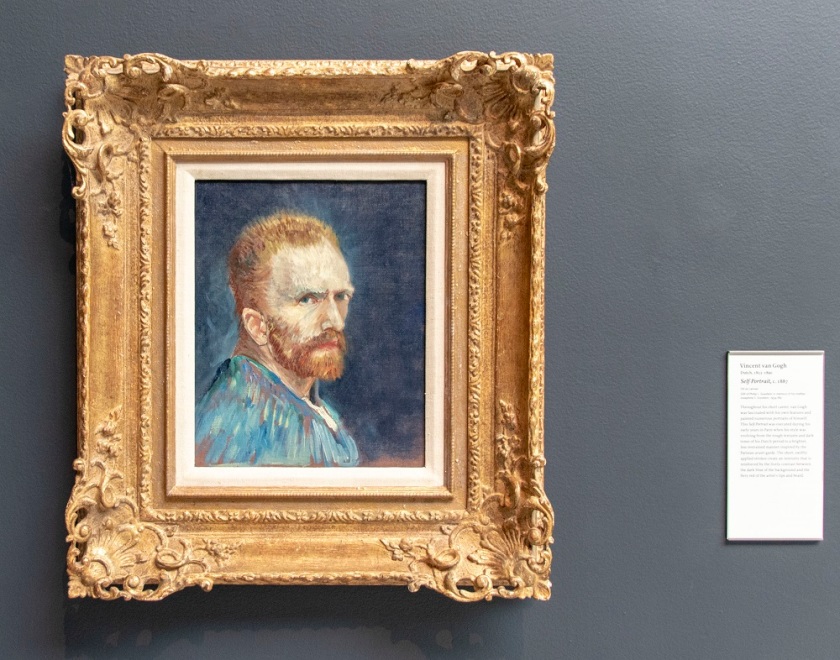 As we made our way down through the museums many floors, the first floor yielded the most familiar names and pieces. As we traipsed down the stairs, the room opened up into a gallery rife with the world’s most well-known artists. There was a Warhol to our left. Across the room was a Calder, and there were plenty of others such as Miro, Picasso, Matisse, and Monet.

Truly, it was a sight to behold, especially with a beautiful marble Greek statue standing “guard” at the center of the gallery.

Before leaving the museum, a familiar sculptor caught our eye from outside a window leading to the courtyard. Claes Oldenburg’s stylized and oversized versions of everyday objects always stands out. In this piece, he collaborated with his wife, Coosje van Bruggen, to create enlarged golf clubs in a golf bag. 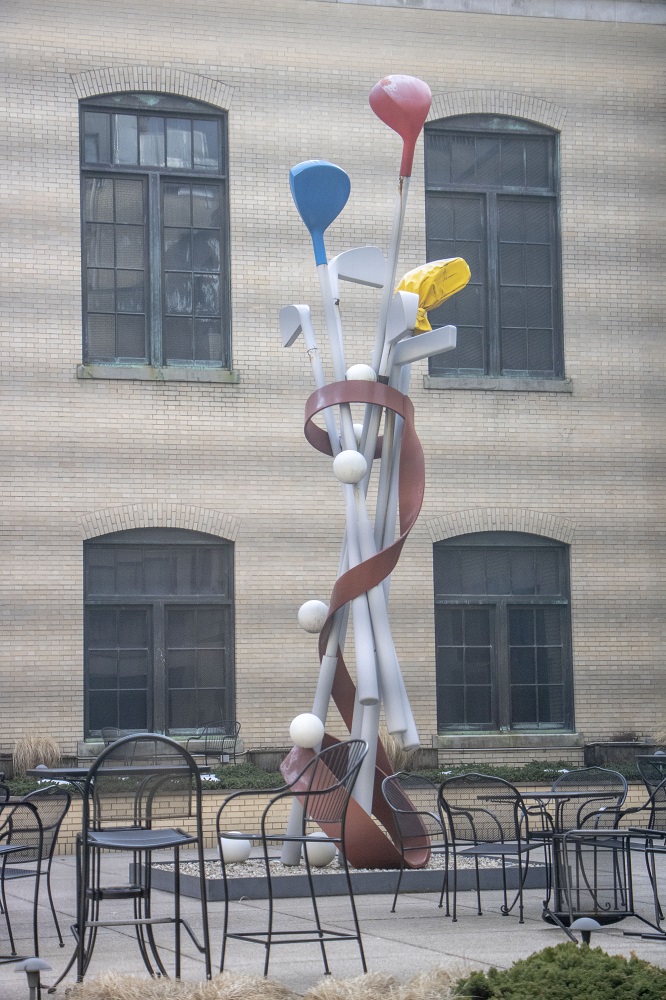 The Wadsworth truly was unique, a real find. We had visited MoMA, The Met, The Whitney, Mass MoCA, and a few smaller art museums, but this one surprised us the most–because we entered not knowing what to expect, and not expecting to find such a large collection of so many amazing artists becoming familiar to us.  This museum might just be the most underrated one we have ever visited.